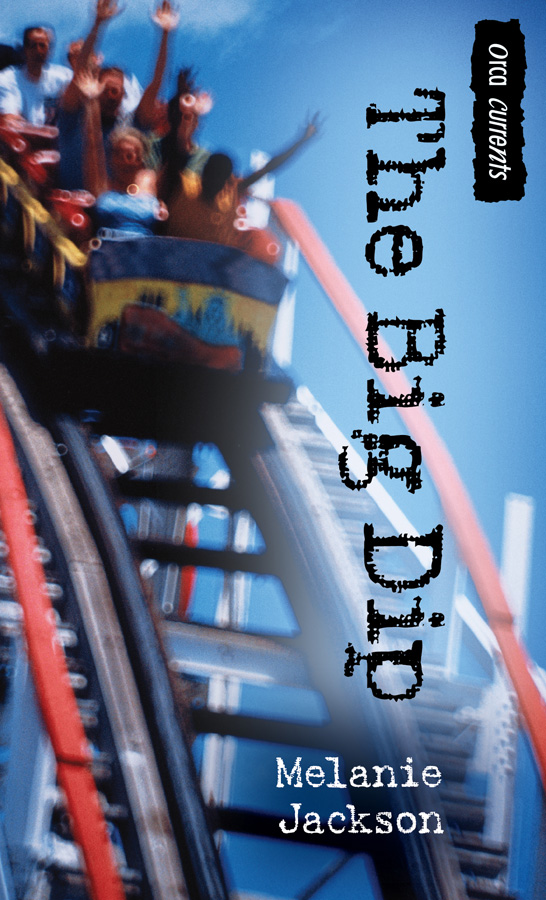 Summary:
At Vancouver's Pacific National Exhibition, Joe Lumby, track star extraordinaire, finds himself caught up in a mystery involving the theft of a gallery treasure.

To my sister-in-law, Lynne Jackson
âMJ

It was coming upâthe big dip.

The cars rattled to the crest of the rickety roller coaster. Usually Skip and I got the first seat. But tonight a grizzled old man had dodged in ahead of us. As the train creaked higher, the old man twisted around to grin at us. One eyelid, missing its eyeball, was squinted almost shut. With his working eye he studied me.

“I know you. You're that speedy feller, Mojo Lumby!” the old man exclaimed with a loud cackle.

It was true. I'd nailed the regional and the provincial track championships. The
Vancouver Sun
had done a story on me just last week.
Joe Lumby, Age 15:
On the Track, Just Call Him Mojo
, the headline said. There had been photos of me zooming around the school field.

The old guy probably recognized me from the photos. “Yeah, well,” I shrugged. I hoped he wasn't going to ask me about my times, not with the big dip coming up.

Besides, the name Mojo was a sore point with me. I was fast on my feet, all right. For me, running was everything. I was almost always training or at meets. The downside was, my grades were tanking. While everyone else got to go away for the summer, I was stuck in Vancouver taking a math course. There was no mojo, no luck, about that.

But for now, I didn't care. The train was edging over the crest. It crashed down the big dip.

At fifty years old, the roller coaster at Vancouver's Pacific National Exhibition is the only wooden one left in Canada. It's also one of the few anywhere that just has dinky metal bars. Most roller coasters have shoulder clamps to hold you in. When you drop in this one, you lurch over the metal bars.

Skip and I leaned forward so we could stretch over the bars. In a whirl of blue sky and rushing air, we lunged, our hands reaching to the tracks.

We always did this. It was as if we were the ride, not the riders.

“Stay still, you idiots!” screeched a woman behind us.

We ignored her. There were shrieks of laughter, and somebody popped the tab off a soda can. I thought that was weirdâ breaking out refreshments as you plunged down the big dip.

In front of us, the old man leaned forward too. I thought it was cool, being that old and still into roller coasters. On the other hand, I hoped the excitement didn't give him a heart attack.

Slam! The train hit the valley. Skip and I sat back and high-fived each other. Nothing beat the big dip.

The train zoomed up the next hill. The PNE coaster is engine-powered only up to the first big dip. After that, it spools around the twists and turns on its own momentum. Roller coaster nuts from all over the world come here to ride the coaster because it's such a museum piece.

I decided that the old guy in front must be one of those nuts. He was still leaning forward, ready to catch the next dip.

I forgot about the old guy as Skip and I lunged again. Whoa! The grounds of the PNE, with their bright rides and concession stands, swirled around us. The merry-go-round was upside down. And there was the Ferris wheel, spinning straight at usâ¦

Seconds later, or so it seemed, the train sputtered to a stop. Skip scrambled onto the platform. He helped out the passenger behind us, a stocky woman with a large boxy purse.

The old guy in the first seat was still leaning forward.

“C'mon, Joe,” Skip called from the platform. “Let's get outta here. We need our junk-food ration for the day!”

The old man moaned. Maybe he did have a heart attack, I thought, alarmed.

I touched his shoulder. “Hey, buddyâ¦”

He straightened up, gasping. His lean face was as gray as concrete. He tried to clutch my arms, but he was too weak. His hands slipped to the sides of my jacket and clenched the fabric.

The stocky woman pushed Skip aside. “I'm a nurse,” she said. “Let me have a look at him.”

Her face shoved up to mine. Her teeth, small and pointy, looked out of place in her large square face.

I started to move out of the way.

But the old man kept clutching my jacket. His lips were twitching. He wanted to speak.

He slumped sideways. His single eye stared up at me, unblinking.

By now the next train had rolled in behind us. An attendant hurried over to see what the delay was. “C'mon,” he urged, glancing at the people waiting to get on. “Gotta move!”

Then he saw the old man. “Jeez,” the attendant said, turning pale.

“He must've had a heart attack,” I said. I was thinking of how the old guy had stretched forward for every dip. I had assumed he was doing it for fun.

The attendant unclipped a cell phone from his belt and started barking into it about an emergency. His voice broke partway through.

The passengers from our train and from the train behind us crowded around. There were some gasps, but nobody said anything. They just stared.

I realized I was still holding the old man's shoulder. I let go.

The sides of his jacket fell back. That's when I saw it.

The small black hole at the back of his neck. Blood spread from it like a red scarf.

That popping sound I'd heard on the roller coasterâit hadn't been someone opening a can. It had been a bullet.

Skip's eyes widened. The terror in them mirrored mine. I could tell he was having the same thought. While we were leaning over the bar, the bullet had skimmed right over our heads.

People around us were screaming. They started running away, shoving at each other in their desperation to get out. There were all kinds of people, all ages, shapes and sizes, all scared out of their minds.

The stocky woman caught the fear too. Changing her mind about helping the old man, she used her big purse to push people aside. Behind her was a lean guy with a blue and white Vancouver Canadians baseball cap. He said something to the woman and pointed over the crowd. She kept bashing her way through.

“There's a shooter around here,” Skip said in my ear. His voice was choked. It was the first time I'd ever heard Skip sound frightened. Usually he was so confident, so sunny. Nothing fazed him.

The attendant looked like he wanted to run too. He bit his lower lip. His freckles stood out against his skin like Frisbees.

I didn't want to leave the attendant alone. It didn't seem right.

Skip gripped my elbow. “Have you forgotten, Joe? You're breaking curfew. You're not supposed to be here.”

I was supposed to be home studying. I had a math test tomorrow. But my parents were visiting friends in Whistler over the next two days, and my kid sister Ellie was at a sleepover.

Plus, in the morning Skip was heading out with his folks to their cottage in the Okanagan. The PNE would be over when he got back. Tonight had been our last chance to ride the big dip together until next year.

Skip had free passes to the whole fair. We could take all the rides we wanted. His dad was on the PNE board of directors.

Skip was going to tutor me when we got back to my place. Skip sailed through math. He sailed through everything. In September, he was going into an advanced class. Regular schoolwork didn't challenge him enough.

Mr. Too-Perfect, I called him sometimes, and he'd laugh. Privately I wasn't sure I was joking. Skip's being a whiz kind of got to me. I had to sweat most of my subjects just to pass.

I should listen to Skip now, I thought. But my eyes were glued to the old man. Why would anyone want to kill a harmless guy like him?

PNE security guards were rushing onto the platform. The attendant started to cry. I wasn't feeling too good myself.

The attendant could only point a shaky hand at the dead man. The guards shoved Skip and me aside.

Sirens soundedâambulances and police were coming.

Skip dragged me to the exit. He urged, “We gotta get outta here. What happens when the police see you? What if somebody from the newspaper takes your picture? Your dad will know you went to the PNE.”

Dad had threatened to pull me out of track if I didn't improve my grades. This summer course is it, he'd said. This is your last chance.

Still, I hesitated. The old man's face swam up before me again. I heard him mumble his last strange words. I told Skip, “The old guy said something about a rose, the Margaret rose. He wanted me to give it to the police.”

“What?” Skip said. “The guy was dying, Joe. He wasn't in his right mind. C'mon. Once we're away from here, you can send the cops a
dozen
roses if it makes you feel better.”

I didn't think the old man had been talking about bouquets. But there was no time to think. The sirens screamed closer, ripping our eardrums. Feet pounded up the entrance ramp. Police officers ran over to the dead man.

“You can't do anything for him,” Skip said.

I nodded numbly. He was right. The old guy was beyond my help. He'd taken the biggest dip of allâthe one that you never come up from.

We bolted down the exit ramp.

Skip came home with me and coached me for the test the next day. “C'mon, dude. I know you can concentrate. I've seen you on the racetrack. Your mind is one hundred percent on the finish line.”

But Skip didn't know there was a third person sitting at the tableâthe ghost of the old man. He was clear to me, even if Skip couldn't see him. One minute the old man was grinning at meâthe next, he was slumping sideways.

Finally, after wrestling with the math for ages, I started to get it.

“You can do anything if you just concentrate,” Skip encouraged. He was so sure I could do it, it kind of infected me. I started believing that, yeah, I
could
pass the math test.

The next morning, the heat wave that the weather people had warned about finally rolled inâjust in time for my math exam.

With no air conditioning in the preâ World War II school, the humidity was thick enough to cut through.

The teacher switched off the lights. “At least we can make it shady in here,” she said, wiping a tissue across her forehead. “Now, good luck with your exam.”

All in Scarlet Uniform (Napoleonic War 4) by Adrian Goldsworthy
The Birds of the Innocent Wood by Deirdre Madden
Roehuesos - Novelas de Tribu by Bill Bridges y Justin Achilli
How To Lose A Bachelor by Anna Banks
The Scarlet Thread by Evelyn Anthony
Prescription: Makeover by Jessica Andersen
Second Chance by Rebecca Airies
The Gurkha's Daughter by Prajwal Parajuly
Bitter Bronx by Jerome Charyn
All of Me by Eckford, Janet
Our partner