The Billionaire's Longshot: Betting on You Series: Book Three 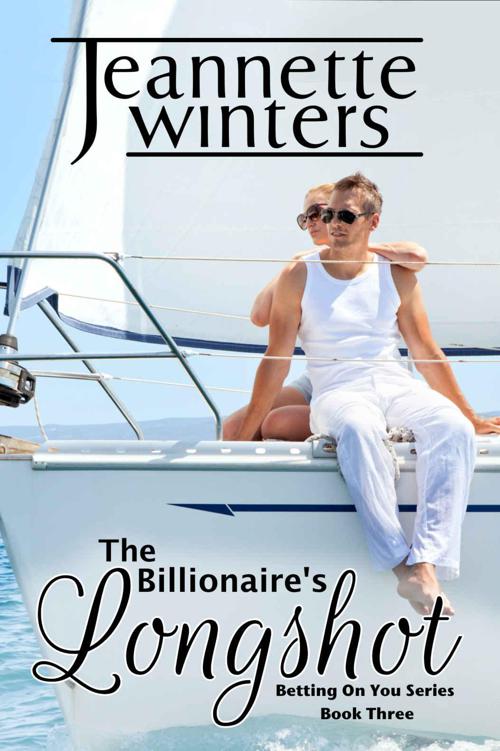 An original work of Jeannette Winters.

All Rights Reserved. No part of this book may be used or reproduced in any manner whatsoever without written permission from the author, except in the case of brief quotations embodied in critical articles and reviews.

This book is a work of fiction. The names, characters, places, and incidents are products of the writer’s imagination. Any resemblance to actual persons, places, events, business establishments or locales is entirely coincidental.

This book is dedicated to Stephanie Aragao who cheers me on endlessly and the many friends and family who take time from their day (not that they have a choice) and listen to me brainstorming.

I am also supported by a team of beta readers who aren’t afraid to tell you the truth. Thank you for that!

Karen Lawson, Janet Hitchcock and Marion Arche, my editors as well as Nicole Sanders at Trevino Creative Graphic Design for my cover, you are all amazing!

To my readers who brighten my day with messages regarding my series.
Always keep romance in your lives!

Ross Whitman wasn’t looking for love. He was content in his lifestyle, a renowned designer of luxury sail boats and one of the world’s most eligible bachelors.

Jill Aragao was focused on one thing, proving she had what it takes to be successful in New York. When her make it or break it opportunity finally arises she is faced with only one obstacle and he’s bound to be a major distraction.

Sparks begin to fly and they ignite something neither had anticipated. One night changes everything.

Falling in love with a man who says he’s incapable of love is always a bad idea. Too bad her heart didn’t get that memo!

Other books by Jeannette Winters

R
oss Whitman sat
on the deck of his boat, drifting on an ocean so calm he could not tell where the night sky ended and the water began. And for all the beauty surrounding him, his mind, like his boat, was adrift. A smile came to his lips when he recalled a soft, delicate hand grabbing his own and pulling him to the dance floor. He was not a man who danced, but that night, the night of his best friend’s engagement party, he danced with
her
.

She had that effect on people. He could count on one hand the number of times he’d met her, but somehow she’d accomplished in a single moment what other women could not in years.

Ross was a laid-back man, or so he liked to think. What others said about him didn’t escape his notice, though. Calm, collected, and ever the peacekeeper, he had a coolness about him that kept most people at a distance, despite his desire to truly connect with someone. He blamed that on his old-money upbringing.

He didn’t lack friends. He had the best a man could ask for, and he hadn’t failed entirely when it came to romance. But for a man whose heart was as deep as the ocean, the shallow, polite relationships with women were not enough to melt his icy exterior.

And then there was Jill with her outstretched hand, her expectation and determination to dance with him evident in her radiant smile. Just remembering her smile was enough to bring one to his lips.

I’ve found the answer I was looking for.
He took a deep breath and let it out slowly.
I’ll call her before I board the plane tomorrow.

I
s he avoiding
me? Why now?
The fundraiser for wounded soldiers was going to take place in two weeks, and there were so many things left to finalize. She needed to make decisions quickly, and while his input wasn’t necessary, it would have been nice. The original meeting with Ross Whitman had gone so well, almost flawlessly.
I guess that’s the problem
. There was only one direction to go from there: down. If she didn’t confirm the final plans with him in the next few days there would be no way to change them later.

Dialing his number once again, she was hit with the disappointment of being immediately directed to his voicemail. “This is Jill. The clock is ticking, and time is running out. It would be nice if you returned one of my calls this week.” As she disconnected the call, she realized her tone had been filled with the frustration she was feeling. It was obvious the pressure was getting to her.
I need to do more yoga.
This wasn’t how she pictured them working together. Jillianne Aragao stared at the cell phone in her hand.

Together, that’s a joke. Ring, damn it!

Others may describe her differently, but she normally thought of herself as a patient person, with an endlessly positive attitude, but at that moment, Jill felt neither. Her nerves were on edge, her head pounded with tension, and she paced her apartment, fighting the urge to break something, anything—no, everything.
If you bailed, Ross! Grrr
. With such short notice she would never be able to find a replacement, at least not one with the connections the Whitmans had when it came to fine wines.
What was I thinking when I said I could handle this one on my own?
It had seemed the perfect opportunity to prove she was ready and capable to take on any challenge.
Boy, was I wrong.

Jill had plans to meet Elaine and Lizette for breakfast the following morning for some ever-so-needed girl time. There was no way she would be able to hide what was going on, not from those two. At times they were able to read her better than she could even read herself.
The benefits of best friends
. Scrolling through the contacts on her phone, her resolution teetered.
Call them and ask for help now or wait?
God knows I need them.
A heavy sigh of defeat escaped her tense body. Something had to be done, and it had to be done today.

Jill’s phone rang, and she had to stop herself from answering it immediately. She didn’t want to come across as desperate. She took a moment to compose herself and see who was calling.
Ugh . . . still not him.

She hit the screen and brought the phone to her ear. “Hey, Donna.”

“Are you pregnant again?” Jill asked.

Donna laughed. “No, no! I found you the perfect apartment. It’s just down the street from me. I know you had your reservations about living
with
me, so I started looking for apartments for you.”

“I really don’t know what you’re trying to do, honey. You’ve been very brave, and you’ve tried very hard. It’s okay to come home, you know. I can only take care of you if you’re within reach.”

Jill knew Donna meant well with her encouragement, but she was unable to hide her condescending, maternal tone in her delivery. All Jill heard was,
You’ve already failed.
She expected Jill to run back to Rhode Island with her tail between her legs. It would be another item added to Donna’s long list of “I told you so’s” she’d be reminded of the rest of her life.
Not this time, Donna.
Her sister was everything she wasn’t: educated, successful, beautiful, with a wonderful husband and a growing family. Jill was happy for her sister, but that wasn’t her path in life, and Donna just couldn’t understand that they were different. Their mother often said as they were growing up, “You girls are as different as night and day but each special in your own way.”

“The offer is still open,” Donna said. “I didn’t mean to flip out on you when I offered to pay your way through college. It’s just . . . starting a business in New York is no joke. If you come back to Rhode Island, I can help you in so many ways. I’m sure Another Chance would take you back in a second if you’re worried about not finding a job here.”

“I’m not in the business alone,” Jill said. “I’m going to be fine.” She said the words, but still was torn about whether it would actually
be
fine.

“Mom and Dad would have wanted you to go to college. What business will take you seriously if you don’t have any credentials? I’m sorry, honey.”

The words stung, but Jill said, “I’ve made up my mind. I’m staying in New York. I’m happy here.”

“Your friends are letting you tag along, but what kind of job is it? Event planning? What is that? Scheduling farmers markets?”

“I didn’t start a business for you or for Mom and Dad. This is something I’m doing for me.” Jill sighed. “I’m waiting for an important phone call about work. I’ve got to go. Love you.”

Jill hung up before Donna could continue. Jill hadn’t been shocked by her sister’s harsh words, and if she were honest, there were times she agreed with Donna. Education was important and even more so to her family. Both her parents had a master’s degree in education. Her mother had been a high school math teacher, and her father had worked as an English professor at the community college. The dinner table discussions always included the dreaded question, “How was school?” This usually led to a lecture on the importance of grades and how they would affect college options later.

Everything changed one rainy night when her parents were killed in a car accident. Jill was only a freshman in high school when it happened, and Donna was commuting to the University of Rhode Island. Thankfully the state appointed Donna as her guardian so she wasn’t uprooted. There was enough money from the settlement for them to continue to live in the family home and cover basic essentials.