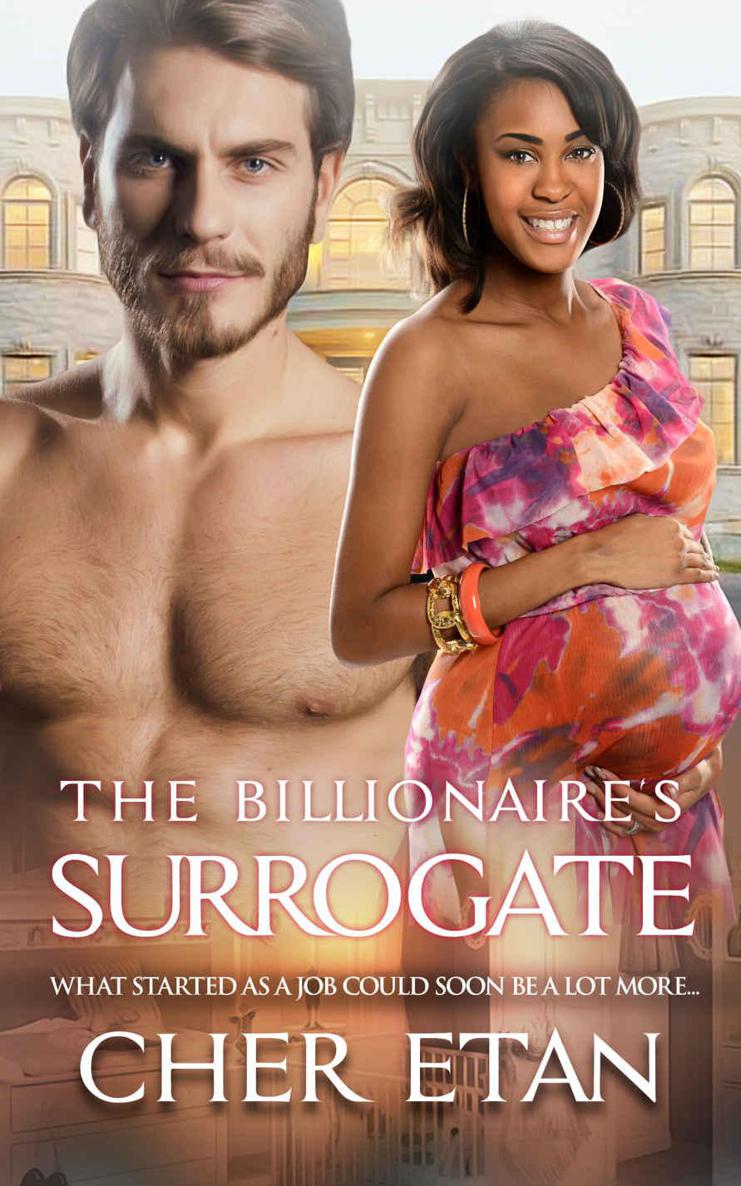 The
Billionaire's Surrogate
What started as a pregnancy of convenience could
soon be a lot more...

A complete
story with no cliff hanger.

Money is
nothing without someone to love.

Max is a
billionaire with a lot going for him. He has the money, the looks,
and a personality to boot. But when diagnosed with prostate cancer,
his life turns around in an instant.

Everything
that was once important now seems trivial to him, and he soon
realizes he hasn't achieved his one main goal in life:

With his
cancer treatment predicted to leave him sterile, he decides hiring a
surrogate mother to bare his child is the best option. And Christine,
a relative of his house keeper, agrees to the role.

But soon
after the process, further tests reveals Max doesn't have cancer
after all and won't become infertile. Now the question of where this
leaves him and Christine arises.

Will she
simply remain the mother of his child? Or will an even more personal
relationship form from this unexpected turn of events?

Find out
in this touching love filled romance by
Cher Etan
.

Suitable
for over 18s only due to passionate love making scenes likely to
leave you needing a cold shower.

Don't miss out, get your copy now.

Get Another Contemporary And BWWM eBook Free!

Hi
there. As a special thank you for buying this ebook, for a limited
time I want to send you another two completely
free
of charge
directly
to your email! You can get it by clicking the cover below or
going
here
:

These
books are so exclusive you can't even buy them. When you download
them I'll also send you updates when new books like this are
available.

Copyright
©
2015 to Cher Etan and SaucyRomanceBooks.com. No part of this book can
be copied or distributed without written permission from the above
copyright holders.

Get
Another BWWM Ebook Free

“
Dear
all, we are gathered here today to celebrate the nuptials between
Christine Alexandre Richards and Rudy Sinclair. If anyone has any
objection as to why these two individuals should not be joined in
Holy Matrimony, please speak up now or forever hold your peace,”
the priest said solemnly. He was inexplicably dressed in a red
jumpsuit and had on make up. In fact, he looked very much like RuPaul
if Christine was not mistaken. Still, it was her wedding day and she
was ecstatic.

“
I
object,” the voice said. Again and again and again; that voice
always objected. No matter what other details of the wedding changed,
that one remained the same.

Slowly,
even though she tried to stop herself doing it, Christine turned
around. It felt like one of those slow motion scenes in movies when
something horrible is going to happen. The heroine is only ever in
time to turn around with a scream and shout “No” in that
slow motion voice that sounded like a nineties tape recorder when the
tape stuck. The woman was always standing there dressed head to toe
in yellow…
yellow;
such a festive color to choose to go around breaking up people’s
weddings…and their hearts. She was a white woman, taller than
average and curvy. In fact her ass was just about the curviest thing
Christine had ever seen…and she’d grown up in an African
American neighborhood so she should know. She wore high yellow heels,
they were almost golden in fact and her toes were gaily painted blue.
She had on a hat…with a veil. The veil just barely covered her
blue eyes and her red lined smiling lips were staring cruelly and
mercilessly at Christine as she voiced her objection. When she was
sure she had everyone’s attention in the room she sauntered
over to the altar and slipped her hand through Rudy’s. He
seemed to be frozen to the spot and didn’t object.

“
You
can’t marry him because he’s already mine,” the
woman said with a triumphant smile.

It
was always at this point that Christine startled awake in a cold
sweat; the dream that wasn’t a dream
not
fading conveniently but echoing as if continuing in some other
dimension close by.

“
Rudy,”
she would whisper in despair and then get out of bed to go rinse her
face and get herself a glass of water.

“
You
don’t have to do that,” Christine would say.

“
I
know,” her grandmother would reply, eyes on the milk to make
sure it didn’t boil over.

Max
Lestrange was in the front row, sitting next to his beautiful model
date, he was pretty sure her name was Kendal but he wasn’t a
hundred percent positive of that. They were here to watch the big
fight as guests of the mayor of Las Vegas. Max was good friends with
her husband. He had been like a father figure to him as he learned
the ropes of being an attorney at law and in turn Max had supported
him when he and then his wife, had run for office. The press was out
in force because the match was a big deal between the defending
champion and his closest contender. Max was trying to enjoy himself
but it had been a strange day; perhaps he was getting old because all
he wanted to do was lie down. The wine he’d taken with dinner
was making him dizzy and not in a good way and the room was hot in
spite of the air conditioning. He could feel the sweat on his
forehead and his upper lip. He really was not liking himself today
and wished he could just excuse himself and go lie down. The match
was starting though and servers were coming around with more
champagne. Maybe that would make him feel better. He took a glass and
downed it at once, more for the cold wetness than the taste but it
did not make him feel better at all. In fact, if he was honest it
made him feel queasy and nauseous. He was afraid he would have to
excuse himself soon if things did not settle down on their own.
Kendal or Kim or whatever her name was leaned toward him with a
smile, murmuring something about how exciting it was. Max murmured
something suitable in reply and then leaned over to speak with the
mayor.

“
Carolyn,
I have to excuse myself,” he said standing up. fighting the
wave of dizziness that assailed him. He really needed to lie down.

Max opened his mouth to
reply but then the world was replaced with darkness and he knew no
more.

He woke to a beeping
sound and the feel of a cool breeze on his buttocks. He had
difficulty opening his eyes, they seemed welded shut…that or
he had no eyes any longer.

“
Hallo,”
he croaked still trying valiantly to open his eyes. “Anybody
there?”

“
Martha
wait,” he said sharply and felt her stop moving. “What’s
wrong with my eyes?”

“
Oh,
they applied some sort of paste over them, I think to stop them
fluttering…you were convulsing sir. Anyway, I’ll get the
nurse,” Martha said.

Max waited impatiently
for someone to come and tell him what was going on with him. He
continued to try and open his eyes. He thought of wiping the paste
off with his hands but when he tried to move them, he felt a pinprick
of pain and a pulling sensation he didn’t like so he ceased to
do that forthwith.

“
Ah,
Mr. Lestrange, welcome back to the land of the living,” a low
male voice said to him, sounding too familiar for someone he’d
never met.

“
We’re
not sure yet,” the doctor replied breezily.

“
Could
you remove this paste so I can open my eyes?” Max asked
irritably.

“
Of
course. Nurse?” the doctor’s voice said. After a moment,
Max felt a cool cloth wiping him gently around his eyes. He could
feel whatever was holding his eyes closed loosen its hold and
suddenly he could see again, his eyes were open and he was staring at
Martha, his black housekeeper for nigh on fifteen years now, and a
young man with black hair and vivid blue eyes who was wearing a white
lab coat. He was also smiling at him as if he couldn’t be more
pleased with himself. Max hated him on sight.

“
So
you don’t know what’s wrong with me, why am I here?”
he asked coldly.

Dr. Schofield’s
smile faltered a bit but it came back, almost at full wattage. “We’re
running tests. Your temperature was elevated very high when you came
in. So much so that you were convulsing. You almost went into shock
but we pulled you back. Your white blood cell count is also elevated
which means you’re sporting an infection of some kind.
Hopefully once the blood work comes back we’ll know more.”

Max stared into the
middle distance. “I see,” he said. “My doctor’s
name is Carlyle Benson; I’m sure my housekeeper’s told
you. Would you kindly summon him?”

“
Then
move me to a facility with which he
is
affiliated,” Max interrupted.

That at least wiped the
smile off Dr. Schofield’s face. “Mr. Lestrange you have
to know that you are very weak right now and not in any position to
be moved,” he said in a more subdued tone than he’d been
hitherto using. “It would not behoove you to try and do so. At
least wait until you’re stronger.”

Max glared at him,
wanting to punch him in the face but truly feeling too weak to move.
He hated it, this weakness; and it scared the hell out of him. What
had happened to him?

“
Have
you checked my system for drugs?” he asked.

“
It's
one of the tests requested,” Dr. Schofield said. “If you
can be just a little patient we should know in an hour or two what
ails you.”

“
An
hour or two?” Max exclaimed in disbelief.

Max just glared at him,
wanting to get out of bed, possibly hit something; preferably the
good doctor. But he just lay back in defeat and stared at the
ceiling.

“
Martha,
did you bring my bed clothes?” he asked.

“
Yes
sir, right here,” Martha said placing a pair of pajamas on the
bedside table where Max could see them.