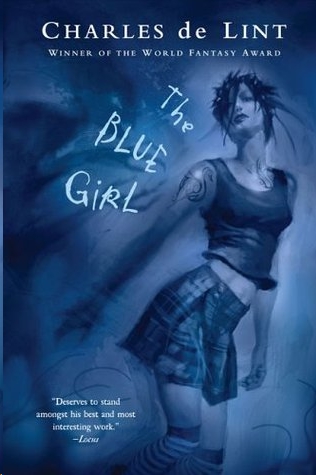 IS BACK IN NEWFORD —

AND AT HIS MAGICAL BEST…

S
EVENTEEN-YEAR-OLD
Imogene’s tough, rebellious nature has caused her more harm than good—so when her family moves to Newford, she decides to reinvent herself. She won’t lose her punk/thrift-shop look, but she’ll try to avoid the gangs, work a little harder at school, and maybe even stay out of trouble for a change.

Her first friend at Redding High, Maxine, is her exact opposite. Everyone considers Maxine a straight-A loser, but as Imogene soon learns, it’s really Maxine’s mother whose rules make it impossible for her to speak up for her true self. Oddly, the friendship works. Imogene helps Maxine loosen up, and in turn, Maxine keeps Imogene in line.

But trouble shows up anyway. Imogene catches the eye of Reddings bullies, as well as the school’s resident teenage ghost. Then she gets on the wrong side of a gang of malicious fairies. When her imaginary childhood friend, Pelly, actually manifests, Imogene realizes that the impossible is all too real. And it’s dangerous. If she wants to survive high school—not to mention stay alive—she has to fall back on the skills she picked up running with a gang. Even with Maxine and some unexpected allies by her side, will she be able to make it?

This compelling novel from Charles de Lint, the acknowledged founder of the “urban fantasy” genre, is set in Newford, home to some of his best stories. After reading it, you’ll want to live in Newford, too.

CHARLES de LINT
: is widely credited as having pioneered the contemporary fantasy genre with his urban fantasy
Moonheart
(1984). He has been a seventeen-time finalist for the World Fantasy Award, winning in 2000 for his collection
Moonlight and Vines;
its stories are set in de Lint’s popular fictional city of Newford, as are those in the collections
Dreams Underfoot, The Ivory and the How,
and
Tapping the Dream Tree.

His novels and short stories have received glowing reviews and numerous other awards, including the singular honor of having eight books chosen for the reader-selected Modern Library “Top 100 Books of the Twentieth Century,”

He is currently the primary book reviewer for
The Magazine of Fantasy and Science Fiction.

A professional musician for over twenty-five years, specializing in traditional and contemporary Celtic and American roots music, he frequently performs with his wife, MaryAnn Harris—fellow musician, artist, and kindred spirit.

I nodded to where a line of kids were waiting to be served what passed for food in the cafeteria.

“The tall, pale guy with the Harry Potter glasses?”

“I don’t see a tall, pale guy, with or without glasses.”

I glanced at her, then looked back, but he wasn’t there anymore.

“Though I’m surprised,” she  went on. “I would have thought you’d reference Buddy Holly. Or at least Elvis Costello.”

“No, I mean, funny-strange,” I said. “He’s gone. But where could he have gone? He was right by the end of that line and it’s too far to the door for him to have slipped out. I only looked away for a second.”

Maxine got an odd look. “You must have seen Ghost.”

This was good, I thought. A nickname was a start.

“How’d he get the name?” I asked, though I could guess from the way he kept disappearing on me.

“Because he really is a ghost. People have been seeing him for years.”

I waited for a punch line, but it didn’t come.

First published in 2004 by Viking, a division of Penguin Young Readers Group

Without limiting the rights under copyright reserved above, no part of this publication may be reproduced, stored in or introduced into a retrieval system, or transmitted, in any form or by any means (electronic, mechanical, photocopying, recording or otherwise), without the prior written permission of both the copyright owner and the above publisher of this book. The scanning, uploading, and distribution of this book via the Internet or via any other means without the permission of the publisher is illegal and punishable by law. Please purchase only authorized electronic editions, and do not participate in or encourage electronic piracy of copyrighted materials. Your support of the authors rights is appreciated.

for
astute editorial advice to

and
my dear wife MaryAnn

If I can dream

of
waking in a dream,

how
can I tell

from
“Thinking after Midnight”

It starts with this faint sound that pulls me out of sleep: a sort of calliope music played on an ensemble of toy instruments. You know, as though there’s a raggedy orchestra playing quietly in some hidden corner of my bedroom, like the echo of a Tom Waits song heard through the walls from the apartment next door. Rinky-dink piano, tinny horns and kazoos, miniature guitars with plastic strings, weird percussion.

I don’t really wake up until I hear a creak from inside my closet. I know exactly what it is: the old wooden chest where I store my childhood treasures. I lie there, staring up at the ceiling, straining to hear more over the insistent whisper of the music, because now I know that all these nursery rhymes and fairy tales are creeping out of the books I used to read when I was a kid. A hinge squeaks on the closet door—the one I’m always telling myself I have to oil, but promptly forget before I actually get to it—and out they come, one by one, their feet making little scratchy noises on the wood floor.

I don’t know if they’re the actual characters from the books or something else again: patchwork creatures made out of words and rags and twigs, of bits of wool and fur, skin and bone. There’s too much shadow and spookiness in the room, so I only catch glimpses of them as they emerge, and I don’t want to lean over the side of the bed to have a better look. All I know for sure is that they come from the books. A pack of strange little creatures, shuffling and dancing their way out of the closet and into the shadows around my bed. And in among them, standing a lot taller than the rest, so I can see his features in the light that comes through my window from the streetlamp outside, is my old imaginary friend, Pell-mell.

I used to call him Pelly and stopped playing with him a good seven years ago, when I was ten. I haven’t really thought much about him since then, except for that day when I first met Maxine.

He hasn’t grown the way I did, so he’s still only around four feet tall, this weird, skinny cross between a hedgehog and a boy, with floppy rabbit ears and a monkey’s prehensile tale. He used to be so sweet, but now he has all the innocence of a dead child’s ghost. It’s in those big eyes of his. He knows too much. He’s seen too much.

He steps up to the bed and lays his hands on my comforter. The fingers seem too long, like they have an extra joint. I don’t remember that from before, either. His face leans close to mine. My gaze lifts, and now all I can see are those big, strange eyes of his. They’re deep and luminous, and I feel like I could fall right into them.

“Imogene,” he says. His voice is a husky rasp and harmonizes with the faint calliope music. “I’ve missed you sideways.”