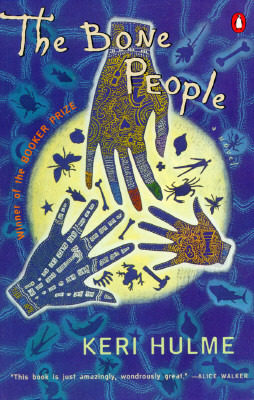 'Set on the harsh South Island beaches of New Zealand, bound in Maori myth and entwined with Christian

symbols, Miss Hulme's provocative novel summons power with words, as a conjurer's spell. She casts her

magic on three fiercely unique characters, but reminds us that we, like them, are 'nothing more than people',

and that, in a sense, we are all cannibals, compelled to consume the gift of love with demands for perfection.'

'This first novel from a New Zealand writer radiates vitality. Seizing on material that might seem outlandish,

she transforms it into a fable that's as persuasive as it's haunting. In this novel, New Zealand's people, its

heritage and landscape are conjured up with uncanny poetry and perceptiveness.' THE SUNDAY TIMES

'I am at one with this year's Booker judges in thinking Keri Hulme's The Bone People the outstanding novel.

The central portrait, an autistic child who would try the patience of a saint. The man and woman who have to

cope with him are not saints: they are New Zealanders who love him, their country, and their self-respect, all

passionately. These elements combine and ignite in such a way as to make you feel you are discovering what

an aspect of real life is like.' Anthony tURTIS FINANCIAL TIMES

'Clearly it was written with passion and it has inspired passions... Rich, varied and flexible, the story becomes

'Keri Hulme is a poet. The power and feeling for nature and the more mystical sides of a dwindling people,

the Maoris, will make it a gem providing a whole new range of experience.' THE DAILY TELEGRAPH

'It is beautiful and terrible. It is tender and cruel. It is dream and reality. It is poetry and crudity. It is infinitely simple and infinitely complex.' NEW ZEALAND HERALD

'It has a tumbling vehemence and a passionate sincerity.' ALLAN MASSIE/THE SCOTSMAN

Keri Hulme has Kai Tahu, Orkney Island and English ancestry and lives at Okarito on the West Coast of

New Zealand. She is a

writer and painter and has published short stories in a wide

variety of magazines and anthologies, and also a book of poetry.

The Bone People is her first novel.

I thank these people and groups of people, without

whom The Bone People would never have been

(for the prize for writing in English 1978) The ICI Company

(for the generous contribution to the 1982 ICI Bursary

Collectives, for friendship and faith.

Standards in a non-standard Book

The Bone People began life as a short story called "Simon Peter's Shell". I typed it out on my first typewriter, nights after working in the Motueka tobacco fields. The typewriter was a present for my 18th birthday from

my mother, but that's another story.

"Simon Peter's Shell" began to warp into a novel. The characters wouldn't go away. They took 12 years to

reach this shape. To me, it's a finished shape, so finished that I don't want to have anything to do with any

alteration of it. Which is why I was going to embalm the whole thing in a block of perspex when the first

three publishers turned it down on the grounds, among others, that it was too large, too unwieldy, too

different when compared with the normal shape of novel.

Enter, to sound of trumpets and cowrieshell rattles, the Spiral Collective.

The exigencies of collective publishing demand that individuals work in an individual way. Communication

with me was difficult

-- I live five hundred miles away, don't have a telephone, and receive only intermittent mail delivery -- so

consensus on small points of punctuation never was reached. I like the diversity.

The editor should have ensured a uniformity? Well, I was lucky with my editors, who respected how I feel

about... oddities. For instance, I think the shape of words brings a response from the reader

-- a tiny, subconscious, unacknowledged but definite response. "OK" studs a sentence. "Okay" is a more mellow flowing word when read silently. "Bluegreen" is a meld, conveying a colour neither blue nor green

but both: "blue-green" is a two-colour mix. Maybe the editors were too gentle with my experiments and

eccentricities. Great! The voice of the writer won through.

To those used to one standard, this book may offer a taste passing strange, like the original mouthful of kina

An explanatory dream: I am in an open windowed railway carriage,

going slowly round some mountains. I say to an unknown friend,

"Hey! These must be the Rimatakas," and sure enough, across the

HIGH, liquorice black on almond icing, and the carriage turns into

a Club Room. The lady in charge has a smile hedged with teeth.

card very bloody conscious I don't have a dollar, let alone ten. I

only came up now. It was really white before." She smiles, and

goes away into the dark. It really surprises me when she returns

with a jug of beer and another smile for me and my friend. We

all sit there, dozens of us, train rocking sadly, mountains cold, moth-holes,

but not a squash court in sight.

Make of it what you will.

I Season Of The Day Moon

II The Sea Round

Translation of Maori Words and Phrases -- 446

The End At The Beginning

He walks down the street. The asphalt reels by him.

It is all silence.

The silence is music.

He is the singer.

The people passing smile and shake their heads.

He holds a hand out to them.

He smiles with them.

The light is blinding: he loves the light.

They are the light.

He walks down the street. The asphalt is hot and soft with sun.

The people passing smile, and call out greetings.

He smiles and calls back.

His mind is full of change and curve and hope, and he knows it is being lightly tapped. He laughs.

New marae from the old marae, a beginning from the end.

His mind weaves it into a spiral fretted with stars.

He holds out his hand, and it is gently taken.

She walks down the street. The asphalt sinks beneath her muscled feet.

She whistles softly as she walks. Sometimes she smiles.

The people passing smile too, but duck their heads in a deferential way as though her smile is too sharp.

She grins more at their lowered heads. She can dig out each thought, each reaction, out from the grey brains,

She is eager to know more.

But for now there is the sun at her back, and home here, and the free wind all round.

And them, shuffling ahead in the strange-paced dance. She

quickens her steps until she has reached them. And she sings as she takes their hands.

They were nothing more than people, by themselves. Even paired, any pairing, they would have been nothing

more than people by themselves. But all together, they have become the heart and muscles and mind of

something perilous and new, something strange and growing and great.

Together, all together, they are the instruments of change.

IN THE BEGINNING, it was darkness, and more fear, and a howling wind across the sea.

"Why not leave him?"

They can't whisper any more.

"No guarantee he'll stay on the bottom. Besides, we'll have to come back for the boat."

The voice. The nightmare voice. The vivid haunting terrible voice, that seemed to murmur endearments all

the while the hands skilfully and cruelly hurt him.

It is happening again, and like the time before, there is nothing he can do to stop it. It will take away the new

people, it will break him, it will start all over again. He cannot change it. And worst of all, he knows in an

inchoate way that the greatest terror is yet to come.

There is a sudden pause in the crashing of the waves, and a drawn prescient hissing.

Even now, the barb of laughter in his voice.

In the memory in the black at the back of his eyes, there are words, different words. Help, but not help.

Words. There were words.

But then the overwhelming wrenching groan of the boat as she struck the rocks.

IN THE BEGINNING, it was a tension, an element of strain that

"Ahh nothing... you're all the man I need." Chuckles in the warm dark.

Sitting up then and saying to him urgently:

It gnaws at him. She knew, somehow, that she wasn't going to

Then, he had only chuckled again and said, "Well, we got him

But the undefinable careworm was still there.

"He needs you... look at him hold on though he's not himself

"Shall we keep him then?" half-joking.

She had answered "Yes!" without hesitation.

"Before them all, man," and she had turned out of his arms and

Then the worm of care had gone. They were whole and sound

together until the night they took her away.

It gnaws at him: the last words she gave him as they wheeled

her under the flaring lights. Harsh and whispered, "O Ngakau, mind

She meant the other one, the one who sat on his lap unmoved

it seemed, while he was shook and robbed of breath by sobbing.

looked into his face with alien sea-coloured eyes, unclouded by tears.

Marama said how bitterly, how hysterically upset he had been. But

he never showed it to me.

It gnaws at him: he has this one thing left of her, this secondhand,

barely-touched half-formed relic of her presence.

And he no longer really wants it.

And he knows the rock of desolation, and the deep of despair.

SHE HAD DEBATED, in the frivolity of the beginning, whether

to build a hole or a tower; a hole, because she was fond of hobbits,

or a tower well,

a tower for many reasons, but chiefly because

As time went on, and she thought over the pros and cons of each,

the idea of a tower became increasingly exciting; a stargazing

platform on top; a quiet library, book-lined, with a ring of swords

on the nether wall; a bedroom, mediaeval style, with massive roofbeams and a plain hewn bed; there'd be a

Blue and Gold by K.J. Parker
The Testimony    by Halina Wagowska
Brain Storm by Warren Murphy, Richard Sapir
Undercover Passion by Raye Morgan
The Genius and the Muse by Hunter, Elizabeth
Broken by Rachel Hanna
Wild Heat (Northern Fire) by Lucy Monroe
When I Look to the Sky by Barbara S Stewart
The Taint by Wallace, Patricia
Sherlock Holmes and the Dance of the Tiger by Suzette Hollingsworth
Our partner