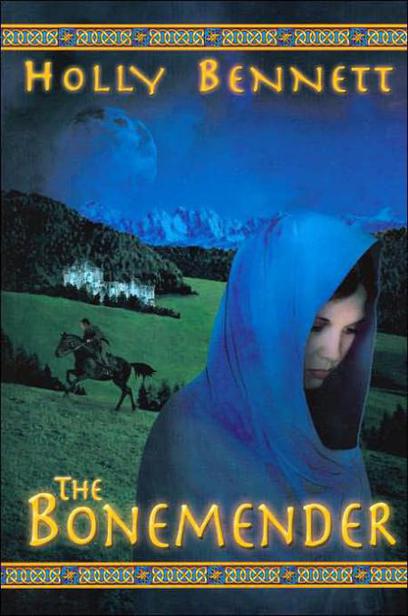 Summary
: In this fantasy, Gabrielle is a bonemender, a healer, who falls in love with a man whom fate seems to have forbidden her, but they must both think about war before they can think about love.

Orca Book Publishers gratefully acknowledges the support for its publishing programs provided by the following agencies: the Government of Canada through the Book Publishing Industry Development Program (BPIDP), the Canada Council for the Arts, and the British Columbia Arts Council.

To my three sons, Riley, Jesse and Aaron,
who turned me into a fantasy nerd.

The song Gabrielle sings is inspired by “The Bergen,” by the fine British singer/songwriter Jez Lowe. Thanks for his kind permission to excerpt a snippet of the lyrics.

Special thanks are due to my son, Aaron, who patiently listened to this story as it was written and thus became my first-round editor, and to my niece, Keegan—Gabrielle’s biggest fan—who has read
The Bonemender
draft more often than I have. Thanks also to my agent, Lynn Bennett, and to my editor, Maggie deVries at Orca Book Publishers, for being tough on sloppy writing in the kindest possible way and for the wonderful enthusiasm she brought to our work together.

The boy’s face was pinched with pain, pallid under his shock of black hair. He glared at Gabrielle and hunched over his left arm, which he cradled in his other hand. He was frightened of her, of what was to come.

Gabrielle knelt beside the boy. She smiled at him. “Hello, Philippe. That must hurt like fury.” He bit his lip, nodded. The blue eyes were trying to fill with tears, but he blinked them away. “Can I look?” asked Gabrielle. “I promise not to touch it.”

Philippe glanced at his mother—who nodded firmly—hesitated, then stared at Gabrielle with a look of cool appraisal that was unnerving in one so young. She returned his gaze, allowing him to take her measure. With a tiny nod, he revealed his injury.

It looked awful. An angry lump jutted forward from the boy’s chest, the arm hanging, useless. Poor Margot must have been frightened to death at the sight, thought Gabrielle. She sat back on her heels.

“Listen, Philippe. This is not as bad as it looks,” she said. “You’ve dislocated your shoulder joint, but if the bone is not broken it can be easily fixed. You will mend as well as ever.” The boy’s eyes searched her face. “I need to check if there is anything else wrong. I’m going to just run my hand lightly along your arm, all
right? I’ll do my very best not to hurt you.” Another nod, this one less reluctant.

Gabrielle laid her hand lightly on Philippe’s skinny arm just below the swollen shoulder joint. She worked her way down the bones, feeling for bumps, swelling, odd angles. Besides the nasty scrapes, there was nothing obvious. She asked Philippe to move his fingers, then his wrist. He could move the elbow joint up and down. He wouldn’t try it sideways, but that was because of the pain it caused in his shoulder.

“You were lucky, my boy. Falling from a roof like that, you could have broken bones all over the place. You must be like a cat, to land so well.” Gabrielle grinned, further disarming her patient. It was not only kindness that prompted her; the treatment would be easier if Philippe was relaxed enough to cooperate. Despite himself, Philippe smiled. He was proud of his little escapade, though he would undoubtedly be punished for it once he recovered.

“Philippe,” said Gabrielle, serious now. She looked him right in the eye. “I have to move your arm back into the place in your shoulder where it fits.” She showed him on her own shoulder how it would be done. “I won’t lie to you—it’s going to hurt. But it won’t take long, and when I’m done, your arm will feel a whole lot better. If I don’t do it, it will never heal on its own.”

Philippe’s eyes teared up again, but he didn’t hesitate. “Okay. You c’n do it.”

Gabrielle first gave him a tea of comfrey, willow bark and hawkweed, sweetened with honey. “This will help you heal faster. It will help you sleep too, and that’s the best thing you could do this afternoon.” Drinking the tea also gave the boy a little reprieve, a chance to relax and prepare himself. When he was
done, Gabrielle had him lie on his pallet. Holding the arm above the elbow steady with one hand, she raised his hand to point at the ceiling. Then she brought his wrist, slowly and smoothly, in an arc away from his body and down to the floor. Philippe cried out, the tears unchecked now. Then, with a clunk, the bone slid back into place. Philippe stopped crying and stared at Gabrielle, astonished.

“Is it done?” It was Margot, his mother, as incredulous as her son.

“Yes,” Gabrielle replied with a smile. “I’ll stay for a while, if I may, and help the torn tissues mend. It will speed his recovery. But I expect your main trouble now will be keeping him quiet for the next few days. He’ll need to keep that arm in a sling, and avoid jostling it, until it’s well set.” Margot turned her back and busied herself with a kettle, hiding her tears of relief. She too had feared for her son.

Gabrielle tied up the sling and accepted a cup of tea from Margot. The two women chatted quietly until Philippe, exhausted, fell asleep. Then Gabrielle got back to work. She knelt by the boy once more, cupped her hand over his injured shoulder. She let her eyes close, her breathing deepen and slow. With her mind still and focused, Gabrielle sent her awareness flowing down to the swollen, torn tissues. Her hand tingled as the warm light flowed through her. The world around dimmed, until there was nothing but the small body under her hand, the light and the healing. She “saw” the muscles knit themselves, firming around the joint. The angry swelling melted away as the light infused the boy’s shoulder.

She sat thus for half an hour, until she was sure the injury would heal fast and trouble-free. Then she sighed, straightened and slowly brought herself back.

“Keep him quiet for as long as you can, Margot, and give him that tea twice a day for three or four days. You can wash the scrapes with it too,” she said. “He’s going to be fine.”

T
HE NOONDAY SUN
pierced through the woodland, creating dramatic shafts of green light in the shady stillness and dappling the backs of the two travelers. Their horses walked at ease, cropping now and then at a tuft of grass but needing no urging from the riders to keep moving along the trail. Indeed, they appeared to need no direction at all—the riders used neither saddle nor rein to guide their steeds. The woods were lazy at this time of day, with few birdcalls or other sounds save the clopping of the horses’ hooves and the occasional murmur of the companions’ voices.

One rider, golden-haired, shaded his eyes and pointed left of the trail.

“Féolan, there’s a glint of water there. Maybe a stream?”

The horses stopped, and the riders sat silent, listening. The chatter of water flowing over rocks was unmistakable. Danaïs grinned modestly.

“You saw it first, Danaïs, and I owe you a dinner tonight if we’re lucky enough to find an inn,” Féolan said. “Let’s fill up our skins, and see if our little stream lends itself to a wash and a rest.”

The two men dismounted and untied the water skins draped over the horses’ backs. Féolan spoke briefly in his horse’s ear, and they headed into the woods, horses following.

The stream proved brisk and clear, though too overgrown on its banks to provide the hoped-for bask in the sun. They filled the skins, stripped off their boots and cooled their feet in the water. The horses waded in gratefully and drank. But there was little
reason to linger. “Might as well push on,” said Danaïs, brushing twigs and pine needles off his feet. “The sooner we leave, the sooner we reach the next town. I intend to have a heroic appetite by nightfall.” He started making his way back, whistling merrily. He could literally whistle the birds out of the trees and often did so for his young daughter’s amusement.

Féolan took a last drink, splashed his face with water and secured the skins on the horses’ backs. As he turned to follow Danaïs, he saw, rather than heard, the underbrush rustling with the flight of some great creature and shouted out a warning even as he knocked an arrow to his bow and began tracking its path. Danaïs, quick though he was, barely had time to turn his head. A cry of dismay burst from Féolan’s throat as the boar shot from the thicket and charged at his friend. The bow sang, but in vain. No arrow on earth could stop three hundred pounds of hurtling boar. Groaning, he watched the enraged beast crash against Danaïs, lunging viciously with its tusks.

G
ABRIELLE HUMMED TO
herself as she ambled up the dusty road back to the castle. She loved her work, but less so when it required hurting patients. She was glad Philippe had been so easily mended. She nodded to Yves, the gatekeeper, as she ducked through the arched entrance.

Whirlwind by Joseph Garber
A Little Something Different by Sandy Hall
El monstruo subatómico by Isaac Asimov
Gertruda's Oath: A Child, a Promise, and a Heroic Escape During World War II by Oren, Ram
Perfect Killer by Lewis Perdue
Deal with the Dead by Les Standiford
Hybrid Zone Recognition by C.E. Glines
Death at St. Asprey’s School by Bruce, Leo
El sol sangriento by Marion Zimmer Bradley
For My Brother by John C. Dalglish
Our partner