Read The Book of 21 Online 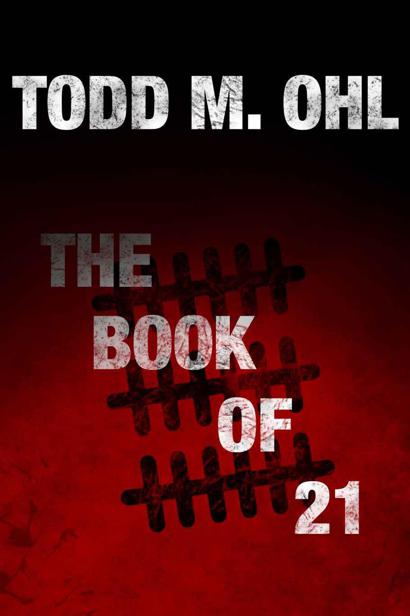 All rights reserved. Any reproduction or distribution of this book without the written permission of the author is prohibited.

This book is a work of fiction. Historical events and figures mentioned in the work are used fictitiously within the story, and the descriptions given are not to be construed as factual depictions of real events. All names, characters, businesses, organizations, places, events, and incidents are the product of the author’s imagination or are used fictitiously. Any resemblance to real events or actual persons, living or dead, is entirely coincidental.

To the angel of the church in Philadelphia write: These things saith he that is holy, he that is true, he that hath the key of David, he that openeth, and no man shutteth, and shutteth and no man openeth…

Chapter 2: A Stop for Breakfast

Chapter 4: A Letter from Beyond

Chapter 7: Rue to the Morgue

Chapter 13: Back to Work

Chapter 15: The Light of the Moon

Chapter 18: Putting on the Ritz

Chapter 26: Two Can Play That Game

Chapter 29: On the Road Again

Chapter 33: A Stop for Pants

Chapter 34: A Drive to Fields

Chapter 37: A Stop at the House of God

Chapter 39: The Door That No Man Openeth

Chapter 40: The Back Door

Chapter 41: Back to the Old Grind

Chapter 42: The Problem at the Front

Chapter 44: A Call from God

Chapter 46: Bats in the Belfry

Though protected from the downpour by the porch roof above, he pulled his patrolman’s raincoat tight to guard against the gusting wind. He was only a block away, and about to pass the house on his way to his favorite coffee shop, when the routine disturbance call came in. If all went well, he would have this wrapped up and be on his way to sip some nice warm java in a few minutes.

As he waited, he soaked in his surroundings. The old Victorian was a pristine and well-maintained home in a graffiti-ridden neighborhood. Though the combination of mustard paint, teal trim, and red shutters struck Fanelli as ugly, he had watched enough home improvement shows on cable to realize they were actually authentic shades for the home.

Two windows flanked the doorway—one to the left, and one to the right. Each spilled light onto the porch. If the inhabitants were not coming to the door, Fanelli thought that the windows might give him a glimpse as to what was happening inside.

He shuffled about six feet to his left and peered in a window. Behind the lace drapery, a lamp illuminated what appeared to be a sitting room. The light made it seem as if someone was home, but he could not be sure; in this neighborhood, homeowners often left a few lights on when they were away.

Dispatch told Fanelli that the caller heard moaning and yelling. Fanelli knew these sounds were not always associated with distress; they could be signs of several types of play. With Pennsylvania Commonwealth University so close, there could be a few causes that were more likely than foul play: some frat brothers could be drunk, or some jock could be home alone with his girlfriend having another type of fun.

“Some kinky son-of-a-bitch gets a little loud while getting his rocks off, and here I stand in the rain—fantastic.”

He stared at the door for a few more seconds and imagined some lucky young kid inside the house, humping the star cheerleader.

After banging on the door a few more times, he shoved his hands into his raincoat and sniffed, sucking back the mucous that the rain had loosened. He then exhaled heavily, shook his head, and even let himself think about that cup of coffee for a split second before deciding it was time to try the window to the right of the front door.

The view through that pane appeared to be the same as the other. Another lamp shone brightly behind a lace curtain, and he could vaguely make out shapes of furniture. As he looked inside, however, he realized that there were small specks of something dark on the lace, almost as if someone splashed some coffee on the curtain.

Fanelli furrowed his brow and shook his head. There was an odd quality to the liquid, and he knew what it was. Spattered on the lace drapery, lamp, and even the window itself, was blood.

As he pulled his .40-caliber Glock handgun from its holster, Fanelli flattened his back to the wall between the window and door. Keeping himself in this position was his best bet; he knew that turning to face either the door or the window would leave his back exposed to the other.

He reached up to the radio on his shoulder and spoke in a quiet but clear voice. “This is Fanelli. I got what looks like blood splattered on the inside of a window here. There’s no answer at the door. We may have people in trouble inside. I’m going to check it out.”

Fanelli heard no reply. He reached for the radio again, and was about to ask whether anyone had heard him, when a woman’s voice buzzed back from his shoulder, “Units on the way. Advise you wait for their arrival.”

He could not tell if the woman was bored or annoyed. It sounded as if she were a little of both. He rolled his eyes.

Looking at the blood-spattered windowpane, he knew that waiting might be the smart thing to do, but it was not the human thing to do; people could be in there waiting for help. Fanelli had too many faces in his mind—faces of people who could have been saved if the cop on the scene had been a few seconds faster. He was not going to have another. He moved closer to the door and cleared his throat.

After a second, he reached out and tried the knob; the door was locked.

Peering back over his shoulder, Fanelli looked for motion in the window. He then glanced back to the door. Nothing seemed to be happening at either location. He wheeled quickly to face the door, hoisted his Glock, aimed at the doorframe next to the knob, and fired three rounds to loosen up the wood. He then targeted the frame next to the dead bolt and squeezed off three more shots. With all his might, he kicked the door open.

The door swung away, sending splinters of wood sliding down the hallway inside. On both the left and right walls, about five feet away, were sets of double doors. Along the left wall, beyond the doors, a staircase rose into darkness. Straight ahead, at the end of the hall, was a single door.

Fanelli hissed. Whoever was in there, he knew, now had the advantage.

His mind quickly processed the situation. The doors were actually the best part of the scene; if someone came at him through the doors, he would hear the latch click open. The immediate danger came from the stairs that ascended into darkness; somebody could be sitting at the top of those stairs right now, watching him and waiting to blow his head off. In that case, he would not see anything until the shot came; if that happened, he might, just
might
, catch a glimpse of his killer in the muzzle flash, right before he died.

Glancing to his right, he saw a long row of light switches. Only one of them was in the down, or off, position. Since the light at the top of the staircase seemed to be the only one in the house that was off, Fanelli went for it. Keeping his gun trained on the top of the stairs, he flipped the switch.

Light bathed the landing at the top of the stairs. It was barren of human life, at least for now. There was still the chance someone might be just out of sight in the upstairs hall, waiting for him to let his guard down. He knew he needed to be careful, but he also knew that someone might be bleeding to death in the next room. The clock was ticking.

He decided that the possible life of a person in the bloodstained room took priority over his own. He slid down the hall to the double doors on the right, leaned in, and listened carefully for any movement. After a second of silence, he reached out and turned the knob slowly.

The doorknob rotated and let out the slightest click. He froze. If someone was in there, the click just announced Fanelli’s exact location. He took a deep breath to steady himself. No bullets were flying through the door; he tried to tell himself that meant he might get out of this house alive.

Fanelli turned the knob until the door wobbled, loose in the frame. He listened for one more second before he gave the door the slightest push.

While the door swung slowly open, he straightened himself and decided to slice pie; it was a slow maneuver, and involved swinging himself like a door. That meant starting with his outstretched gun pointing parallel to the wall and sliding steps until he was aiming straight into the room. The method revealed the room to the officer a little at a time so that they could accomplish two things: react to dangers in an incremental manner, and avoid death.

He began sidestepping to the left. Items in the room appeared from left to right: a blue chair, a pole lamp, and a bookshelf. Everything seemed normal. With his next step, three things revealed themselves at once. He saw a red velvet curtain along the back wall, the back of a computer monitor perched on the corner of a desk, and on the hardwood floor in front of the desk, blood.

Fanelli swallowed hard and listened for any movement, in the room, on the stairs, or at the hall doors. There was nothing. Everything was still.

As he continued his swing slowly, he saw a dismembered arm on the blood-dewed floor. The humerus was protruding from the shoulder end. Fanelli sucked in a quick breath.

He slowly took his next step and saw two dismembered legs. They were crossed, as if severed while their owner was causally watching the evening news. Behind them sat a torso without limbs or genitalia; the hairy chest and lack of breasts told Fanelli that it was male.

He swung a little more to see a head sitting beside the torso. Its eyes were wide open, staring at him from the floor. Some kind of bloody tissue was jammed into its gaping mouth. From the short and curly hairs that sat on the chin, he was guessing that bloody tissue was the torso’s missing genitalia. With all there was to process, Fanelli took a second to realize that a machete was sticking out of the top of the head.