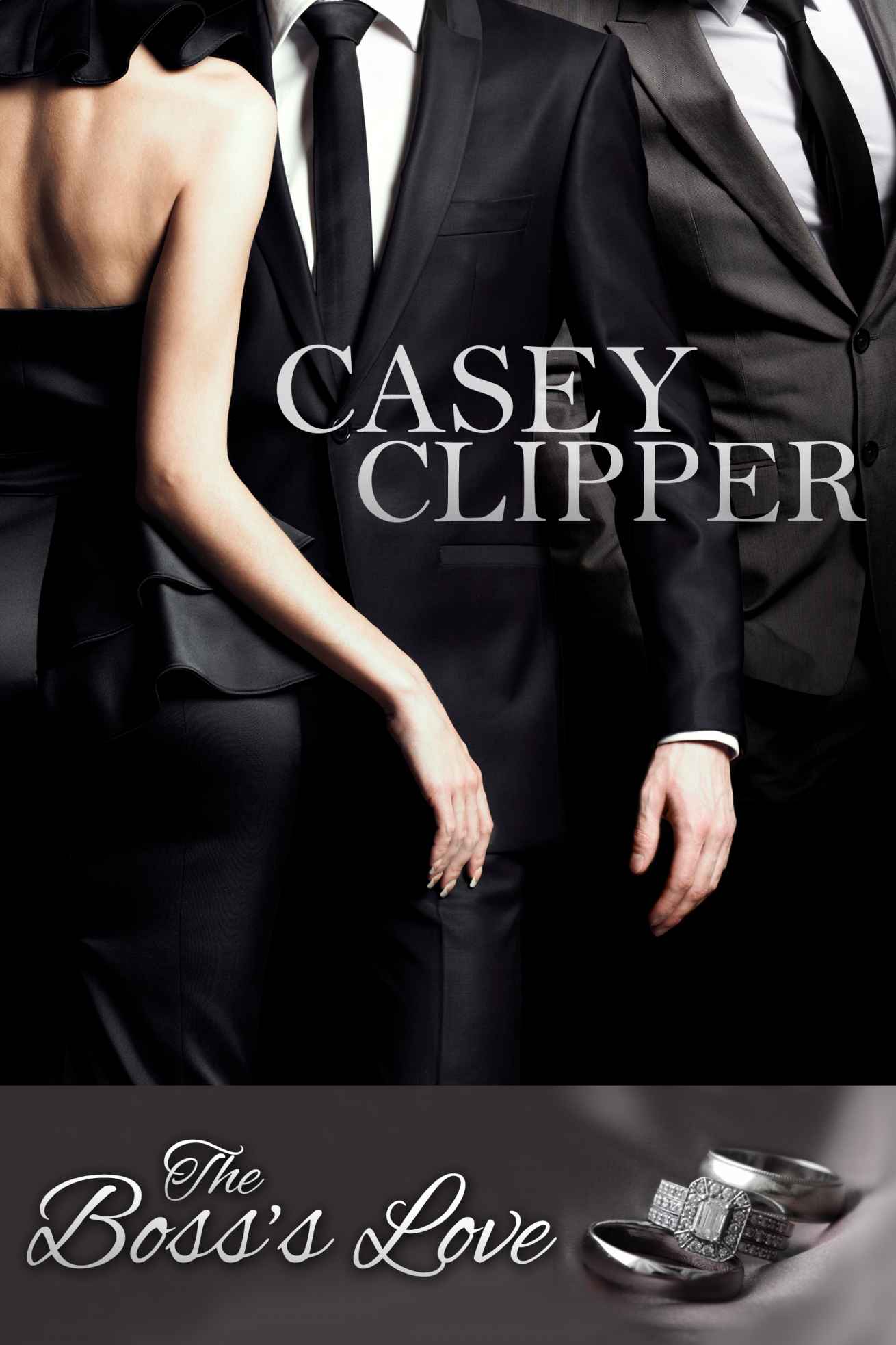 The Right of Casey Clipper to be identified as the author of this work has been asserted by her.

All rights reserved.  No part of this book may be reproduced, scanned, or distributed in any printed or electronic form without permission.  Please do not participate in piracy of copyrighted materials in violation of the author's rights.

This is a work of fiction.  Names, characters, places, and incidents either are the product of the author's imagination or are used fictionally, and any resemblance to actual persons, living or dead, businesses, companies, events, or locales is entirely coincidental.

To my husband – my rock, my sanity (or insanity-whichever), my voice of reason.

Seated in his assigned, unmarked government car, John Marshall scanned the parking lot. His partner of ten years, David Shalen sat next to him eyeing the front doors to the bar. For an hour they had remained in that vehicle discussing their approach.

"She is doing okay. The chemo has been rough on her but she's a fighter. She'll be fine," David answered, wishing he was with his mother right now instead of seated in this parking lot.

Ten minutes later the black BMW they waited for arrived and pulled into a spot three cars up from theirs. They watched the driver talk on her cell phone for a few minutes before she climbed out of the sleek car and headed into the bar for late Friday afternoon happy hour.

Shooting his partner a glare, David remained silent, keeping his concerns to himself.

Dressed in their business suits in order to blend with the happy hour crowd, John and David strolled into the restaurant. Fortunately, they quickly found their mark seated at the bar already with a drink. As the bar filled with the after work crowd, they were lucky to find two empty stools next to her. John marched straight to the seat beside her and plopped down. Two men just relaxing after a hard week at work.

Before they situated themselves comfortably, the female bartender was on top of them. She leaned over to expose her cleavage in her extra small V-neck tee shirt. "Hey, guys. What can I get you to drink?"

Reaching into the cooler, she pulled out two bottles, uncapped and set the beers on the bar. "Four dollars."

"I've got this one." David grinned, pulling out the government business debit card. Tonight was courtesy of the good taxpaying people of the Unites States of America.

"Do you want me to start a tab?" the bartender asked.

Pretending to start up a conversation, John casually leaned against the bar. Out of his peripheral vision, he noticed Courtney Millen's beauty from her pictures didn't do her justice. She was absolutely breathtaking. Long strawberry blonde hair with a slight wave. Unfortunately the picture-perfect style hid some of her profile features but that didn't matter.

As he got lost in trying to have a random discussion with his partner and take in more of her, a subtle floral scent wrapped around his nose. Had she just come from the salon? Man, he could bury his nose into her hair and lose himself in her.

"Hello?" she answered, her voice soft but confident. "Yes," she said, nodding as if the person on the other end of the phone could see her.

John chuckled, granting him a furrowed brow from his partner.

"It's not listed yet but it's one point five million, Mr. Hepler. It does go on the market next week," she said.

A business call. According to their background check, Courtney sold real estate for an east suburb agency.  Considered one of the best agents in the area, she sold anything from fifty thousand dollar homes to twenty million dollar business buildings. That was how she met her boyfriend two years ago.

"Email me the offer and I'll inform my client.  I should be able to let you know by lunch Monday whether or not they'll accept," she explained. She paused for a moment then smiled. "Thank you, Mr. Hepler." She ended the call and took a sip of her fruity drink.

John made a bold move, one not discussed with his partner.

"You sell real estate?" he asked, leaning towards her.

She startled but quickly recovered and stuck out her hand. "Yes, Courtney Millen."

A small, disapproving growl came from his partner.

"I'm sorry to have overhead the conversation," John said.

Dismissively she waved her hand. "Don't apologize. If you talk on your cell phone in public, then you have to live with the fact that someone will overhear you."

He chuckled. "I suppose that's true."

"So, are you in the market for a home?" she asked, clearly going into business mode.

"Maybe. I just moved here but haven’t had much time to look for a permanent home,” he baited her.

"Well, that's my job now isn't it? What would you be looking for?" She repositioned herself to face him.

She literally took his breath away. Flawless, porcelain skin and subtle makeup enhanced her enormous, sapphire blue eyes that drew him in.

She reached past John to David. "Hello, Courtney Millen."

"David Mathews," he said politely then picked up his longneck and took a long swig, but warily watched the scene.

"To be honest with you, Courtney, can I call you Courtney?"

"Of course." She smiled.

"Well, are you married, engaged, single, kids?" she asked and reached into her designer purse and pulled out a small notepad.

He chuckled. "I'm single, no kids, and not home too much. I travel extensively with my job."

"Okay, have you thought about a condo?" she asked.

"No, I’d like to have a yard. When I'm home I like to entertain friends. You know, watch football, barbeque. But I'm not looking for something with three bedrooms,” he answered truthfully. If he actually was in the market that description would be what he wanted in a home.

"Yeah, I suppose." John shrugged and took a swig from his beer.

"I like the east suburbs side of the city. From what I've been told there's more to do there and nice neighborhoods." And close to Courtney's work.

"Well, you're information is correct,” she said, furiously scribbling on her notepad. "If you want me to I can look into some homes for you." She pulled out a business card from her purse and handed it to him. "My office and cell numbers. I'll let you think about it over the weekend. If you decide you would like to look for a home call me Monday and I'll pull up some homes to get started."

"Thanks, Courtney. I appreciate it,” he said. Her name rolled beautifully off his tongue.

Affectionately, he smiled at his girlfriend. His eyes gleamed with obvious adoration. He chastely kissed her lips. Clearly marking his territory. He glanced up at the two men seated next to his best girl and surveyed them with keen eyes.

"I may have just picked up another client, honey. He needs a home." Courtney beamed and flashed John a brilliant smile.

Struck stupid, he felt as if he'd been hit by lightning. That breathtaking smile would be permanently burned into his memory.

"Ah." Darren nodded. "Well, you're in good hands if you go with my girl here. She's the best and brightest in real estate,” he bragged.

Finally Mr. Murphy ordered a drink off the overheated bartender but not before he granted her with a flirtatious wink. Typical. The man was quite aware of his affect on women. While the bartender fumbled for his drink, he took the seat on the other side of Courtney, who abandoned their potential business interaction to focus on her long-time boyfriend.

Damn it, Darren Murphy could have any woman he wanted. In fact for many years he had. But to the man's credit, since the day he met her, he only had eyes for Courtney. No girlfriends on the side. Didn't fool around behind her back. No mistresses to coerce and turn on Mr. Murphy. They determined his past lovers were kept close to the chest within his mob community. Somehow he changed into a one-woman man and that made their job much more difficult. But Courtney was considered an outsider of his world, which was why they initiated their focus on her.

When Darren stepped into the bar to meet the love of his life for their usual Friday happy hour meeting
, he zeroed in on the man seated too close to her and his body language. Of course the man was attracted to his Court. Why wouldn't he be? Gorgeous, brilliant, and kind, in addition, her job made her innately outgoing. But the sight of her speaking to another man in a bar did
not
sit well with him.

He strode with purpose up to his girl and made certain to show she was taken. Yes, totally caveman, but he didn’t give a shit. Since Courtney refused the ring he desperately wanted to give her, he found other mannerisms to make certain men knew she was spoken for. He made territorial contact as he kissed her soft cheek and took in her heady scent. Naturally she abandoned the guy and focused on him, which had his heart expand even more, if possible, over her loyalty to him. God, he loved and adored her.

Once the bartender served Darren his drink, and Courtney focused entirely on him, he brushed her beautiful hair off her shoulder. Parting his legs, he pulled her bar stool closer to him then leaned over and brushed his lips against hers.