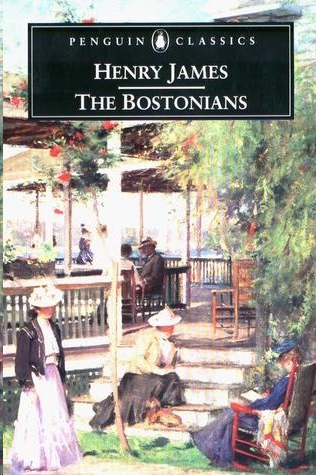 The World of Henry James and The Bostonians

Inspired by Henry James and The Bostonians

From the Pages of

“I pretend not to prevaricate.” (page 3)

“A radical? She’s a female Jacobin—she’s a nihilist. Whatever is, is wrong, and all that sort of thing. If you are going to dine with her, you had better know it.” (page 5)

She was heroic, she was sublime, the whole moral history of Boston was reflected in her displaced spectacles; but it was a part of her originality, as it were, that she was deliciously provincial.

Miss Chancellor would have been much happier if the movements she was interested in could have been carried on only by the people she liked, and if revolutions, somehow, didn’t always have to begin with one’s self—with internal convulsions, sacrifices, executions. A common end, unfortunately, however fine as regards a special result, does not make community impersonal. (pages 104-105)

There were so many things that she hadn’t yet learned to dislike, in spite of her friend’s earnest efforts to teach her. (page 113)

Though she had grown up among people who took for granted all sorts of queer laxities, she had kept the consummate innocence of the American girl, that innocence which was the greatest of all, for it had survived the abolition of walls and locks. (pages 113-114)

Olive had a standing quarrel with the levity, the good-nature, of the judgments of the day; many of them seemed to her weak to imbecility, losing sight of all measures and standards, lavishing superlatives, delighted to be fooled. The age seemed to her relaxed and demoralised, and I believe she looked to the influx of the great feminine element to make it feel and speak more sharply. (page 118)

Civilisation, under such an influence, in such a setting, appeared to have done its work; harmony ruled the scene; human life ceased to be a battle. She went so far as to ask herself why one should have a quarrel with it; the relations of men and women, in that picturesque grouping, had not the air of being internecine. (page 143)

It came home to him that his opinions were stiff, whereas in comparison his effort was lax; and he accordingly began to wonder whether he might not make a living by his opinions. (page 175)

There was such a risk that a slim provincial girl, pretending to fascinate a couple of hundred
blasé
New Yorkers by simply giving them her ideas, would fail of her effect, that at the end of a few moments Basil Ransom became aware that he was watching her in very much the same excited way as if she had been performing, high above his head, on the trapeze. (page 244)

“The whole generation is womanised; the masculine tone is passing out of the world; it’s a feminine, a nervous, hysterical, chattering, canting age, an age of hollow phrases and false delicacy and exaggerated solicitudes and coddled sensibilities, which, if we don’t soon look out, will usher in the reign of mediocrity, of the feeblest and flattest and the most pretentious that has ever been. The masculine character, the ability to dare and endure, to know and yet not fear reality, to look the world in the face and take it for what it is—a very queer and partly very base mixture—that is what I want to preserve, or rather, as I may say, to recover; and I must tell you that I don’t in the least care what becomes of you ladies while I make the attempt!” (page 310)

“Think how delightful it will be when your influence becomes really social.” (page 359)

But though she was glad, he presently discovered that, beneath her hood, she was in tears. It is to be feared that with the union, so far from brilliant, into which she was about to enter, these were not the last she was destined to shed. (page 414)

The Bostonians
was initially serialized in
The Century Magazine
between 1885 and 1886, and published in volume form in 1886.

Published in 2005 by Barnes & Noble Classics with new Introduction,

Notes, Biography, Chronology, A Note on the Text, Inspired By,

Comments & Questions, and For Further Reading.

Comments & Questions, and For Further Reading

All rights reserved. No part of this publication may be reproduced or
transmitted in any form or by any means, electronic or mechanical,
including photocopy, recording, or any information storage and
retrieval system, without the prior written permission of the publisher.

Produced and published in conjunction with:

The writer Henry James was born into a wealthy family in New York City in 1843. His father, Henry, Sr., was a religious freethinker and follower of the philosopher Emanuel Swedenborg and associated with many of the literary men of his day, including Nathaniel Hawthorne and Ralph Waldo Emerson. Young Henry was educated privately in New York, Geneva, Paris, and London; the family lived alternately in Europe and the United States for much of his childhood.

He began his literary career writing for magazines. Having dropped out of Harvard Law School to pursue writing, he associated with the literary set in Cambridge, Massachusetts, and was a good friend of budding novelist and critic William Dean Howells. In 1864 James’s first published piece of fiction, the story “A Tragedy of Error,” appeared in
Continental Monthly.
He also wrote reviews and articles for
Atlantic Monthly
and
The Nation.
He frequently traveled to Europe and in 1876 settled permanently in London.

James is often cited as one of literature’s great stylists; it has been said that his writing surrounds a subject and illuminates it with a flickering light, rather than pinning it down; according to Virginia Woolf in her diaries, he spoke in the same way. His style became more and more indirect as he moved from his early period, when he produced novels that considered the differences between American and European culture and character—
Roderick
Hudson (1876),
The American
(1877), The
Europeans
(1878),
Daisy Miller
(1879),
Washington Square
(1881), and
The
Portrait
of a Lady
(1881)—to his middle period, when he wrote two novels about social reformers and revolutionaries,
The Bostonians
and
The Princess Casamassima,
both in 1886, as well as the novellas
The Aspern Papers
(1888) and
The Turn of the Screw
(1898).

In 1898 James retreated to Lamb House, a mansion he had purchased in Rye, England. There he produced the great works of his final period, in which in complex prose he subtly portrayed his characters’ inner lives:
The Wings of the Dove
(1902),
The Ambassadors
(1903), and
The Golden Bowl
(1904). He returned to the United States for the last time to supervise production of a twenty-six-volume edition of his most important fictional works that was published between 1907 and 1917.
The American Scene
(1907), an account of his last journey to America, is highly critical of his native land. He became a British citizen in 1915. Shortly after receiving the Order of Merit, Henry James died, on February 28, 1916, leaving behind a prodigious body of work: twenty completed novels, 112 stories, and twelve plays, as well as voluminous travel writing and literary journalism and criticism.

The World of Henry James and
The Bostonians

Scipio Africanus by B.h. Liddell Hart
More Than Blood by Amanda Vyne
Glory and the Lightning by Taylor Caldwell
Hooked By Love by Lockhart, Cate
Coming Around Again by Billy London
Dark Horse by Marilyn Todd
Ithaca by Patrick Dillon
Fog Magic by Julia L. Sauer
Alluvium by Nolan Oreno
Kiss of the Highlander by Karen Marie Moning
Our partner