Read The Boys from Biloxi: A Legal Thriller Online

The Boys from Biloxi: A Legal Thriller 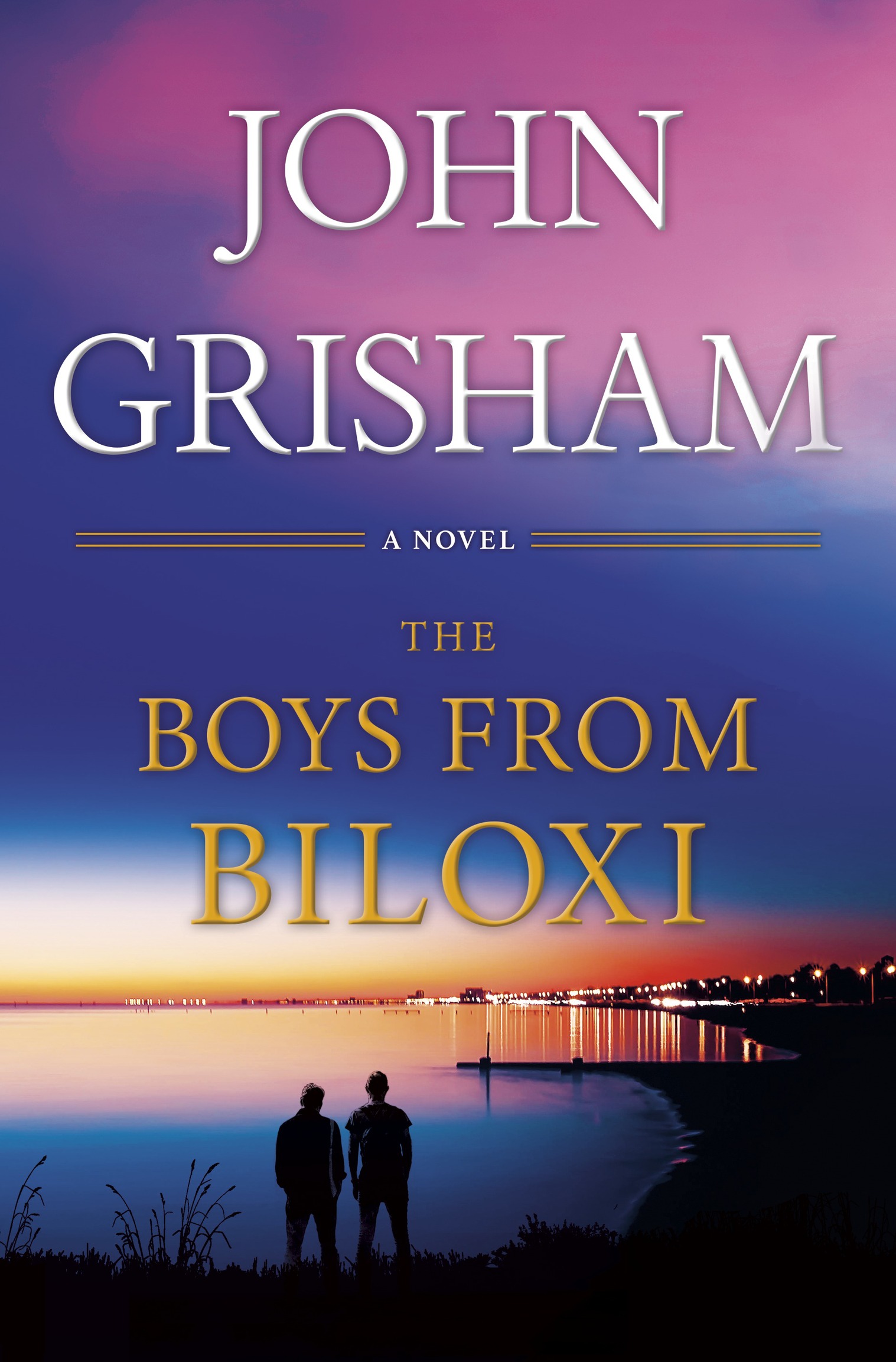 A Time to Kill

The King of Torts

A Time for Mercy 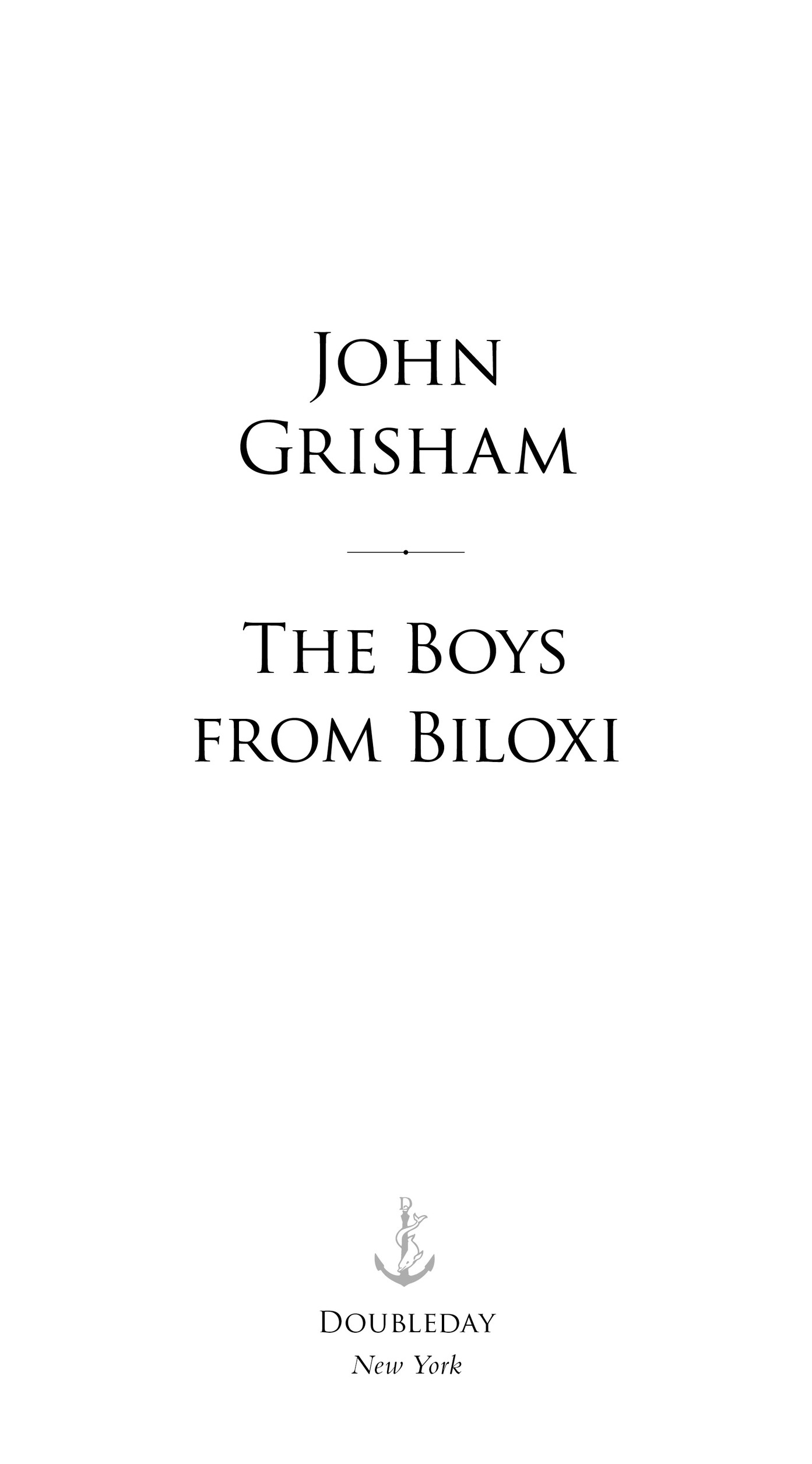 Doubleday
and the portrayal of an anchor with a dolphin are registered trademarks of Penguin Random House LLC.

Part One: The Boys

A hundred years ago, Biloxi was a bustling resort and fishing community on the Gulf Coast. Some of its 12,000 people worked in shipbuilding, some in the hotels and restaurants, but for the majority their livelihoods came from the ocean and its bountiful supply of seafood. The workers were immigrants from Eastern Europe, most from Croatia where their ancestors had fished for centuries in the Adriatic Sea. The men worked the schooners and trawlers harvesting seafood in the Gulf while the women and children shucked oysters and packed shrimp for ten cents an hour. There were forty canneries side by side in an area known as the Back Bay. In 1925, Biloxi shipped twenty million tons of seafood to the rest of the country. Demand was so great, and the supply so plentiful, that by then the city could boast of being the “Seafood Capital of the World.”

The immigrants lived in either barracks or shotgun houses on Point Cadet, a peninsula on the eastern edge of Biloxi, around the corner from the beaches of the Gulf. Their parents and grandparents were Poles, Hungarians, Czechs, as well as Croatians, and they had been quick to assimilate into the ways of their new country. The children learned English, taught it to their parents, and rarely spoke the mother tongues at home. Most of their surnames had been unpronounceable to customs officials and had been modified and Americanized at the Port of New Orleans and Ellis Island. In Biloxi cemeteries, there were tombstones with names like Jurkovich, Horvat, Conovich, Kasich, Rodak, Babbich, and Peranich. They were scattered about and mixed with those of Smith, Brown,
O’Keefe, Mattina, and Bellande. The immigrants were naturally clannish and self-protective, but by the second generation they were intermarrying with the early French families and all manner of Anglos.

Prohibition was still the law, and throughout the Deep South most Baptists and Methodists righteously pursued the dry life. Along the Coast, though, those of European descent and Catholic persuasion took a dimmer view of abstinence. In fact, Biloxi was never dry, regardless of the Eighteenth Amendment. When Prohibition swept the country in 1920 Biloxi hardly noticed. Its bars, dives, honky-tonks, neighborhood pubs, and upscale clubs not only remained open but thrived. Speakeasies were not necessary because booze was so prevalent and no one, especially the police, cared. Biloxi became a popular destination for parched Southerners. Add the allure of the beaches, delicious seafood, a temperate climate, and nice hotels, and tourism flourished. A hundred years ago the Gulf Coast became known as “the poor man’s Riviera.”

As always, unchecked vice proved contagious. Gambling joined drinking as the more popular illegal activities. Makeshift casinos sprang up in bars and clubs. Poker, blackjack, and dice games were in plain view and could be found everywhere. In the lobbies of the fashionable hotels there were rows of slot machines operating in blatant disregard for the law.

Brothels had been around forever but kept undercover. Not so in Biloxi. They were plentiful and serviced not only their faithful johns but police and politicians as well. Many were in the same buildings as bars and gambling tables so that a young man looking for pleasure need only one stop.

Though not flaunted as widely as sex and booze, drugs like marijuana and heroin were easy to find, especially in the music halls and lounges.

Journalists often found it difficult to believe that such illegal activity was so openly accepted in a state so religiously conservative. They wrote articles about the wild and freewheeling ways in
Biloxi, but nothing changed. No one with authority seemed to care. The prevailing mood was simply: “That’s just the Biloxi.” Crusading politicians railed against the crime and preachers thundered from the pulpits, but there was never a serious effort to “clean up the Coast.”

The biggest obstacle facing any attempts at reform was the longtime corruption of the police and elected officials. The cops and deputies worked for meager salaries and were more than willing to take the cash and look the other way. The local politicians were easily bought off and prospered nicely. Everyone was making money, everyone was having fun, why ruin a good thing? No one forced the drinkers and gamblers to venture into Biloxi. If they didn’t like the vice there, they could stay home or go to New Orleans. But if they chose to spend their money in Biloxi, they knew they would not be bothered by the police.

Criminal activity got a major boost in 1941 when the military built a large training base on land that was once the Biloxi Country Club. It was named Keesler Army Airfield, after a World War I hero from Mississippi, and the name soon became synonymous with bad behavior from tens of thousands of soldiers getting ready for war. The number of bars, casinos, brothels, and striptease joints increased dramatically. As did crime. The police were flooded with complaints from soldiers: rigged slots, floating roulette, cheating dealers, spiked drinks, and sticky-fingered prostitutes. Since the owners were making money they complained little, but there were plenty of fights, assaults on their girls, and broken windows and whiskey bottles. As always, the police protected the ones who paid them, and the jailhouse doors revolved with GIs. Over half a million of them passed through Keesler on their way to Europe and the Pacific, and later Korea and Vietnam.

Biloxi vice was so profitable that it naturally attracted the usual assortment of characters from the underworld: career criminals, outlaws, bootleggers, smugglers, rumrunners, con men, hit men, pimps, leg-breakers, and a more ambitious class of crime lords.
In the late 1950s, a branch of a loose-knit gang of violent thugs nicknamed the Dixie Mafia settled in Biloxi with plans to establish their turf and take over a share of the vice. Before the Dixie Mafia, there had always been jealousy among the club owners, but they were making money and life was good. There was a killing every now and then and the usual intimidation, but no serious efforts by one group to take over.

Other than ambition and violence, the Dixie Mafia had little in common with the real Cosa Nostra. It was not a family, thus there was little loyalty. Its members—and the FBI was never certain who was a member, who was not, and how many claimed to be—were a loose assortment of bad boys and misfits who preferred crime over honest work. There was no established organization or hierarchy. No don at the top and leg-breakers at the bottom, with mid-level thugs in between. With time, one club owner managed to consolidate his holdings and assume more influence. He became “the Boss.”

What the Dixie Mafia had was a propensity for violence that often stunned the FBI. Through its history, as it evolved and made its way south to the Coast, it left behind an astonishing number of dead bodies, and virtually none of the murders were ever solved. It operated with only one rule, one hard-and-fast, cast-in-stone blood oath: “Thou shalt not snitch to the cops.” Those who did were either found in ditches or not found at all. Certain shrimp boats were rumored to unload weighted corpses twenty miles from shore, into the deep, warm waters of the Mississippi Sound.

In spite of its reputation for lawlessness, crime in Biloxi was kept under control by the owners and watched closely by the police. With time, the vice became roughly concentrated into one principal section of town, a one-mile stretch of Highway 90, along the beach. “The Strip” was lined with casinos, bars, and brothels, and was easily ignored by the law-abiding citizens. Life away from it was normal and safe. If one wanted trouble, it was easy to find. Otherwise, it was easy to avoid. Biloxi prospered because of
seafood, shipbuilding, tourism, construction, and a formidable work ethic fueled by immigrants and their dreams of a better life. The city built schools, hospitals, churches, highways, bridges, seawalls, parks, recreational facilities, and anything else it needed to improve the lives of its people.

Capture by Annabelle Jacobs
Secrets Of Bella Terra by Christina Dodd
Brass Ring by Diane Chamberlain
Cold Light of Day by Anderson, Toni
Geography by Sophie Cunningham
Lust - 1 by Robin Wasserman
The Treatment and the Cure by Peter Kocan
The Day It Happened (A Miranda's Rights Mystery Book 0) by Lanier, Linsey
Of Foreign Build by Jackie Parry
My Pops Is Tops! by Nancy Krulik
Our partner