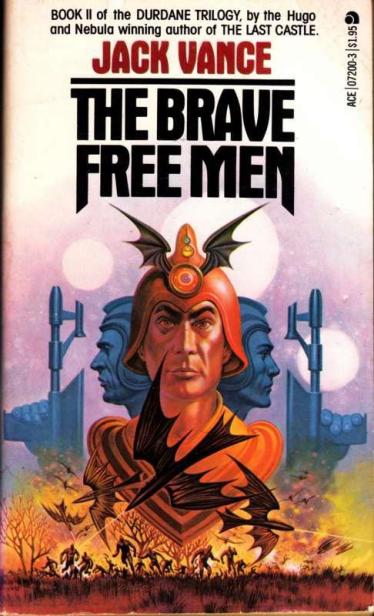 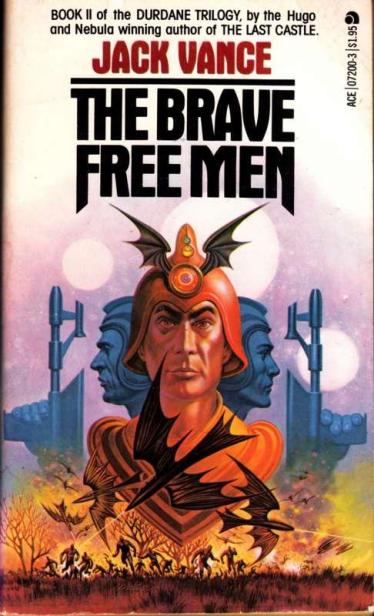 To fight the Rogushkhoi a special corps has been formed:

If you are brave;

If you would lose your torc;

If you would fight for Shant;

You are invited to join the Brave Free Men.

The corps is elite.

Present yourself to the agency at Garwiy City.

And so they came streaming into the city by the hundreds, young and old alike, desperate to gain their freedom and risk their lives to fight the fiendish invader. But among the fiercely dedicated leaders of their cause was one man who would betray them all
—
unless he could be found, and stopped, in time.

The Durdane Trilogy by Jack Vance

A Division of Charter Communications Inc

This story originally appeared in serial form in
The Magazine of Fantasy and Science Fiction.

All rights reserved. No part of this book may be reproduced in any form or by any means, except for the inclusion of brief quotations in a review, without permission in writing from the publisher.

Scanned and Proofed by eBookMan version 1.0

In a chamber high under the dormers of Fontenay's Inn, Etzwane stirred on his couch. He had slept but little. Presently he arose and went to the window, where the stars had paled on the violet dawn. The far slopes of the Ushkadel showed only the occasional green sparkle of a street lamp; the Aesthete palaces were dark.

In one of these palaces, thought Etzwane, the Faceless Man had slept no better than himself.

He turned away from the window and went to the washstand. A carbon-fume mirror gave back his image, a face altered both by the gloom of dawn and the umbral quality of the mirror. Etzwane peered close. This unreal, somewhat menacing person might well be himself most truly: the face sardonic, drooping of mouth, hollow of cheek; the skin sallow with a leaden sheen; the eyes dark holes, punctuated by a pair of glittering reflections. He thought: here stands Gastel Etzwane, first Chilite Pure Boy, then Pink-Black-Azure-Deep Greener, now a man of enormous power. He spoke to the image: "Today is a day of important events; Gastel Etzwane must not allow himself to be killed."
The
image gave back no reassurance.

He dressed and went down to the street. At a booth on the riverbank he ate fried fish and bread and considered his prospects for the day.

In broad essence the job was simple. He must go to Sershan Palace and there compel Sajarano, the Anome of Shant, to do his bidding. If Sajarano demurred, Etzwane need merely press a button to explode his head, for now Sajarano wore a torc and Etzwane did not. It was work of stark and brutal simplicity—unless Sajarano divined his solitary condition, his lack of ally or confederate, in which case Etzwane's situation became precarious.

With his breakfast finished there was nothing to deter him; he set forth up Galias Avenue. Sajarano, he reflected, would desperately be seeking to escape from his intolerable predicament. Etzwane asked himself: what, in Sajarano's place, would be his own response? Flight? Etzwane stopped short. Here was a contingency he had not considered. From his pouch he brought the pulse-emitter, once Sajarano's basic tool of law enforcement. Etzwane encoded the colors of Sajarano's torc. The yellow button would now—if necessary—detonate the torc, thereby removing Sajarano's head. Etzwane pushed the red "Seek" button. The box hummed, the sound fluctuating with change of direction. At maximum the box pointed toward Sershan Palace. Etzwane proceeded, more thoughtful than ever. Sajarano had not taken to flight. He might have evolved a strategy more active.

Galias Avenue terminated at the Marmione Plaza, where a fountain of milk-white water played over artifacts of purple glass; the Koronakhe Steps opposite, constructed by King Caspar Pandamon, rose toward the terraces of the Ushkadel. At the Middle Way Etzwane left the steps and proceeded eastward, around the sweep of the Ushkadel. The prismatic Palace Xhiallinen rose above him; here lived Jurjin, the Faceless Man's "Benevolence." Among a dozen other mysteries, this: why had Sajarano selected so conspicuously beautiful a girl for his deputy? . . . The mystery, in this case, might be more apparent than real, so Etzwane speculated. The Anome, like any man, could suffer the pangs of love. Jurjin of Xhiallinen perhaps had reacted coolly to the attentions of Sajarano, who was neither handsome, dashing, nor distinguished. Perhaps she wondered when the Faceless Man had ordered her into his service and commanded her to take no lovers. In due course the Faceless Man might have ordered her to look kindly upon Sajarano. So Etzwane conjectured. . . . He came to the Palace Sershan, neither more nor less splendid than any of the others. Etzwane halted, to review all circumstances. The next half-hour would determine the future of Shant; each minute carried more weight than all the days of a normal man's life. He looked up and down the. facade of Sershan Palace. Columns of crystal, more lucid and transparent than air itself, fractured the beams of the triple suns; the violet and green domes beyond sheltered chambers where sixty Sershan generations had lived, celebrated their festivals, and died.

Etzwane trudged forward. He crossed the loggia, approached the portico, and here he paused. Six doors of inch-thick glass, each fifteen feet high, barred his way. No light or movement appeared within. Etzwane hesitated, uncertain how to proceed. He began to feel foolish, hence angry. He rapped on the glass. His bare knuckles made little noise; he pounded with his fist. He saw movement within; a moment later a man came around the side of the place. It was Sajarano himself.

"These are ceremonial doors," said Sajarano in a mild voice. "We seldom open them; would you come this way?"

In glum silence Etzwane followed Sajarano to a side entrance. Sajarano motioned him within. Etzwane halted and searched Sajarano's face, to which Sajarano returned a faint smile, as if he found Etzwane's wariness amusing. With his hand on the yellow button Etzwane entered the palace.

"I have been expecting you," said Sajarano. "Have you breakfasted? Perhaps you'll take a cup of tea. Shall we go up to the morning room?"

He led the way to a sunny chamber with a floor of green and white jade tiles. The wall to the left was shrouded in dark green vines; the wall to the right was clear white alabaster. Sajarano motioned Etzwane to a wicker chair beside a wicker table, then at a sideboard served himself a few morsels of food and poured tea into a pair of silverwood cups.

Etzwane carefully seated himself; Sajarano took the chair opposite, his back to the ceiling-high windows. Etzwane studied him with somber calculation, and Sajarano once again gave back his faint smile. Sajarano was not an imposing man physically; his features were small; under a broad high forehead his nose and mouth seemed almost immature, his chin was a nubbin. The Anome of popular conception was vastly different from this mild, reasonable man.

Sajarano sipped his tea. Best to take the initiative, thought Etzwane. He spoke in a careful monotone: "As I previously mentioned, I represent that segment of the public which is seriously concerned in regard to the Roguskhoi. We believe that if decisive steps are not taken, in five years there will be no more Shant—only a great horde of Roguskhoi. As the Anome it is your duty to destroy these creatures; such is the trust the people of Shant repose in you."