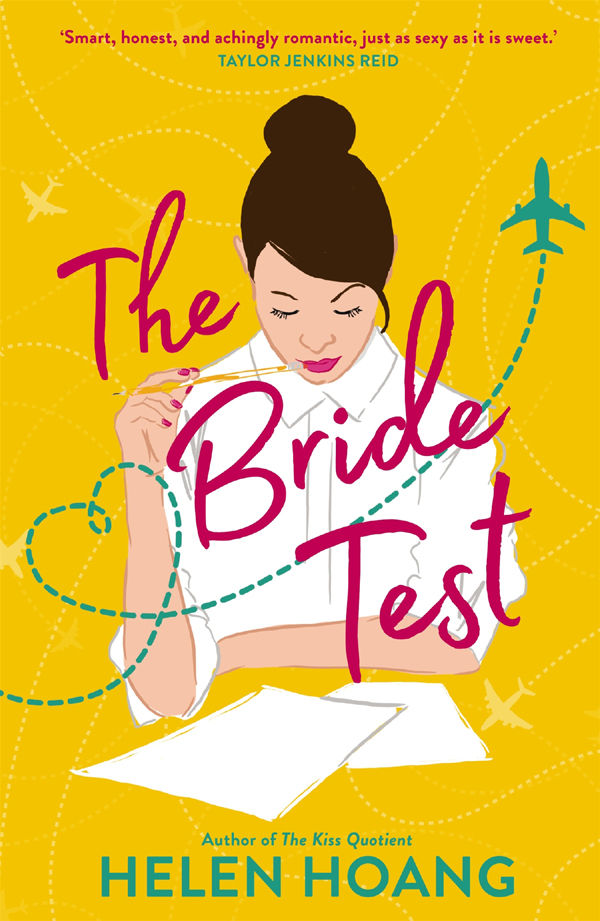 ‘This is such a fun read, and it’s also quite original and sexy and sensitive.’

‘
The Kiss Quotient
is the perfect balm for any reading slump and a wonderful palate cleanser for the summer. It also might just be the best book you read all year.’

‘Hoang’s witty debut proves that feelings are greater than numbers, no matter how you add things up.’

‘Hoang knocks it out of the park with this stellar debut.’

‘A riveting, compulsively readable romance that brims with feeling and warmth.’

‘An absolute delight—charming, sexy, and centered on a protago nist you love rooting for.’

‘A vividly romantic tale filled with depth, humor and a universal sense of humanity.’ 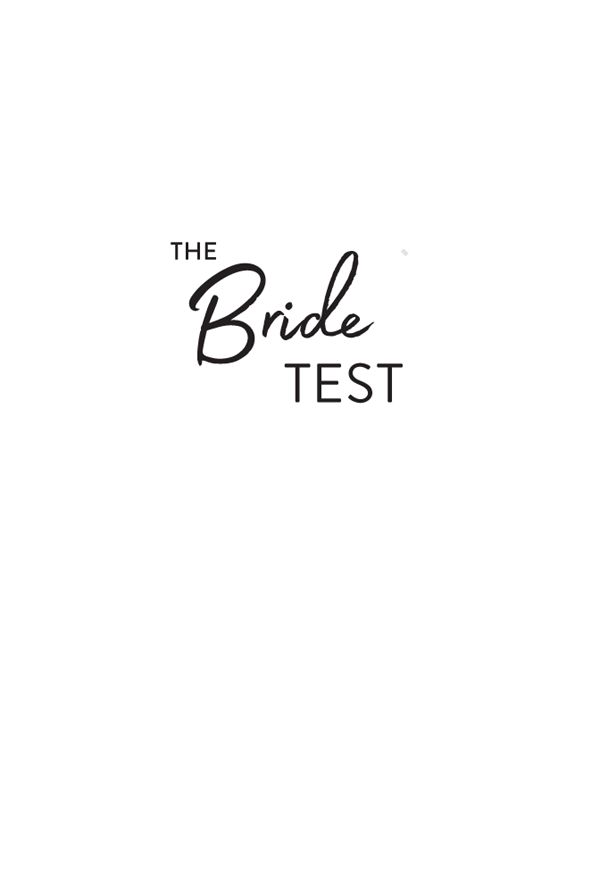 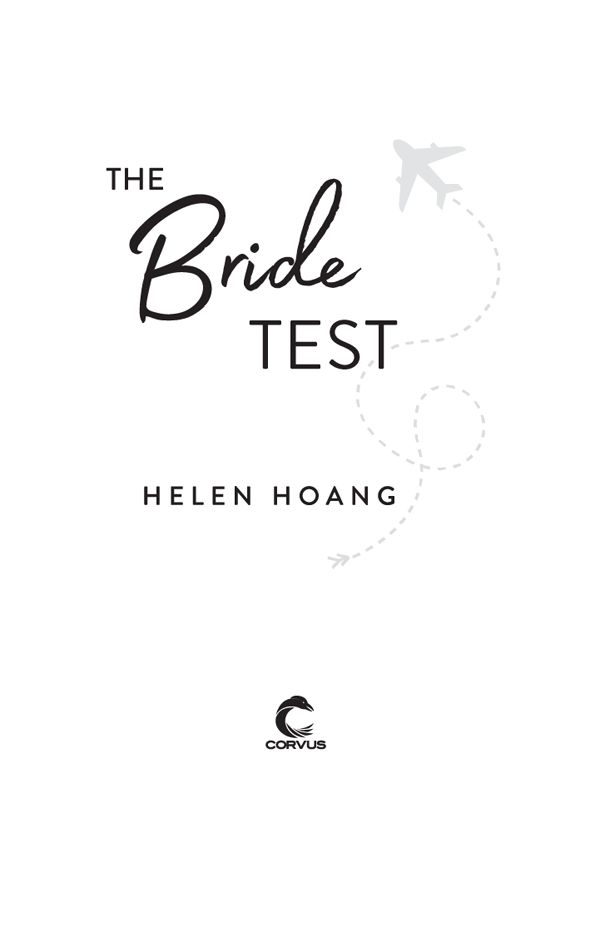 First published in 2019 in the United States of America by Berkley, an imprint of
Penguin Random House LLC.

First published in 2019 in Great Britain by Corvus, an imprint of Atlantic Books Ltd.

The moral right of Helen Hoang to be identified as the author of this work has been asserted by her in accordance with the Copyright, Designs and Patents Act of 1988.

This novel is entirely a work of fiction. The names, characters and incidents portrayed in it are the work of the author’s imagination. Any resemblance to actual persons, living or dead, events or localities, is entirely coincidental.

Mẹ
Thank you for loving me and teaching me
how to chase my dreams.
I’m proud to be yours.

Johnny
I still miss you, but especially at weddings.
Love, always.

But his eyes were dry.

If they stung, it was due to the heavy incense fogging the funeral parlor’s reception room. Was he sad? He thought he was sad. But he should be
sadder
. When your best friend died like this, you were supposed to be destroyed. If this were a Vietnamese opera, his tears would be forming rivers and drowning everyone.

Why was his mind clear? Why was he thinking about the homework assignment that was due tomorrow? Why was he still functioning?

His cousin Sara had sobbed so hard she’d needed to rush to the bathroom to vomit. She was still there now— he suspected— being sick over and over. Her mom, Dì Mai, sat stiffly in the front row, palms flat together and head bowed. Khai’s mom patted her back from time to time, but she remained unresponsive. Like Khai, she shed no tears, but that was because she’d cried them all out days before. The family was worried about her. She’d withered down to her skeleton since they’d gotten the call.

Rows of Buddhist monks in yellow robes blocked his view of the open casket, but that was a good thing. Though the morticians had done their best, the body looked misshapen and wrong. That was not the sixteen-year-old boy who used to be Khai’s friend and favorite cousin. That was not Andy.

The only parts of him that survived were the memories in Khai’s head. Stick fights and sword fights, wrestling matches that Khai never won but refused to lose. Khai would rather break both of his own arms than call Andy his daddy. Andy said Khai was pathologically stubborn. Khai insisted he merely had principles. He still remembered their long walks home when the weight of the sun was heavier than their book-filled backpacks and the conversations that had taken place during those walks.

Even now, he could hear his cousin scoffing at him. The specific circumstances eluded him, but the words remained.

Nothing gets to you. It’s like your heart is made of stone.

He hadn’t understood Andy then. He was beginning to now.

The droning of Buddhist chants filled the room, low, off-key syllables spoken in a language no one understood. It flowed over and around him and vibrated in his head, and he couldn’t stop shaking his leg even though people had given him looks. A furtive glance at his watch confirmed that, yes, this had been going on for hours. He wanted the noise to stop. He could almost envision himself crawling into the coffin and shutting the lid to block the sound. But then he’d be stuck in a tight space with a corpse, and he wasn’t sure if that would be an improvement over his current predicament.

If Andy were here—
alive
and here— they’d escape together and find something to do, even if it was just going outside to kick rocks around the parking lot. Andy was good that way. He was always there when you needed him. Except for now.

Khai’s big brother sat beside him, but he knew Quan wouldn’t want to leave early. Funerals existed for people like Quan. He needed the closure or whatever it was people got from them. With his intimidating build and the new tattoos on his neck and arms, Quan looked like one badass motherfucker, but his eyes were rimmed red. From time to time, he discreetly brushed the moisture from his cheeks. Just like always, Khai wished he could be more like his brother.

A metal bowl rang, and the chanting stopped. Relief was instant and dizzying, like an enormous pressure had suddenly dissolved. The monks worked with the pallbearers to close the casket, and soon a procession filed sedately down the center aisle. Because he disliked standing in lines and the claustrophobic press of bodies, Khai stayed seated as Quan got to his feet, squeezed his shoulder once, and joined the exodus.

He watched as relatives trudged past. Some cried openly. Others were more stoic, but their sadness was obvious even to him. Aunts, uncles, cousins, distant relations, and friends of the family all supported each other, joined together by this thing called grief. As usual, Khai was not a part of it.

A group of older women that consisted of his mom, Dì Mai, and two of his other aunts brought up the end of the line because of a near-fainting spell, sticking close in adulthood just like everyone said they had as young girls. If it weren’t for the fact that they all wore black, they could have been attending a wedding. Diamonds and jade hung from their ears, throats, and fingers, and he could smell their makeup and perfume through the haze of the incense.

As they passed his row, he stood and straightened the hand-me-down suit coat from Quan. He had a lot of growing to do if he was ever going to fill this thing out. And pull-ups. Thousands of pull-ups. He’d start those tonight.

When he looked up, he discovered the ladies had all paused next to him. Dì Mai reached a hand toward his cheek but stopped before touching him.

She searched his face with solemn eyes. “I thought you two were close. Don’t you care that he’s gone?”

His heart jumped and started beating so fast it hurt. When he tried to speak, nothing came out. His throat was swollen shut.

“Of course they were close,” his mom chided her sister before tugging on her arm. “Come, Mai, let’s go. They’re waiting for us.”

With his feet frozen to the floor, he watched as they disappeared through the doorway. Logically, he knew he was standing in place, but he felt like he was falling. Down, down, down.

Ever since his elementary school teacher insisted his parents take him to a psychologist, he’d known he was different. The majority of his family, however, had discounted the resulting diagnosis, saying he was merely “a little strange.” There was no such thing as autism or Asperger’s syndrome in the countryside of Vietnam. Besides, he didn’t get into trouble and did well in school. What did it matter?

The words wouldn’t stop echoing in his head, bringing him to an unwelcome self-realization: He was different, yes, but in a
bad
way.

Andy had been right. Khai’s heart really was made of metaphorical stone.

The knowledge spread over him like petroleum in an oil spill. He didn’t like it, but there was nothing to do but accept it. This wasn’t something you could change. He was what he was.

He unfisted his hands, worked the fingers. His legs moved when he commanded them. His lungs drew breath. He saw, he heard, he experienced. And it struck him as being incredibly unfair. This was not what he would have chosen. If he could have chosen who went in that casket.

The chanting started again, signaling the funeral was nearing its end. Time to join the others as they said their final good-byes. No one seemed to understand it wasn’t
good
-bye unless Andy said it back. For his part, Khai would say nothing.

Tempestuous Miracles by Anya Byrne
Wedded in Passion by Yvette Hines
Enter Helen by Brooke Hauser
Daughter of Mine by Anne Bennett
Nora & Kettle by Lauren Nicolle Taylor
Choices by Sara Marion
The Girl Who Never Came Back by Cross, Amy
Falling More Slowly by Peter Helton
Play the Game by Nova Weetman
Savor by Xavier Neal
Our partner