Read The Bridges at Toko-ri Online

The Bridges at Toko-ri 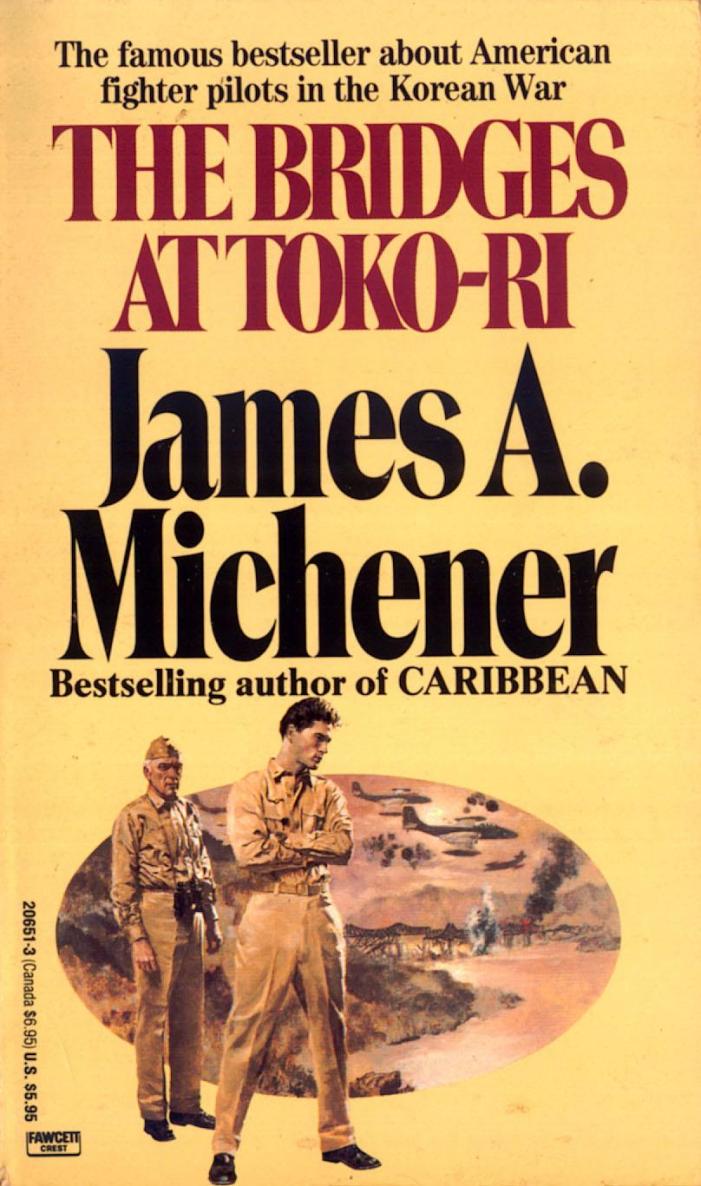 In a field three miles from a village, Brubaker
lay
hiding in a rice paddy. What
was he
doing here, he wondered. Why wasn’t he at home in Denver tending to his law practice, having dinner with his wife and daughters. He looked up and saw the enemy soldiers closing
in ...

TALES OF THE SOUTH PACIFIC*

THE FIRES OF SPRING*

THE WATERMEN THE COVENANT*

THE BRIDGE AT ANDAU*

JAPANESE PRINTS: FROM EARLY MASTERS TO THE MODERN

PRESIDENTIAL LOTTERY: THE RECKLESS GAMBLE IN OUR ELECTORAL SYSTEM

KENT STATE: WHAT HAPPENED AND WHY*

Sale of this book without a front cover may be unauthorized. If this book is coverless, it may have been reported to the publisher as “unsold or destroyed” and neither the author nor the publisher may have received payment for it.

All rights reserved under international and Pan-American Copyright Conventions, including the right to reproduce this book or portions thereof in any form.
Published in the United States by Ballantine Books, a division of Random House, Inc., New York, and simultaneously in Canada by Random House of Canada Limited, Toronto.

This edition published by arrangement with Random House, Inc.

To MARSHALL U. BEEBE

THE SEA was bitter cold. From the vast empty plains of Siberia howling winds roared down to lash the mountains of Korea, where American soldiers lost on patrol froze into stiff and awkward forms. Then with furious intensity the arctic wind swept out to sea, freezing even the salt spray that leaped into the air from crests of falling waves.

Through these turbulent seas, not far from the trenches of
Korea,
plowed a considerable formation of American warships. A battleship and two cruisers, accompanied by fourteen destroyers to shield against Russian submarines, held steady course as their icy decks rose and fell and shivered in the gale. They were the ships of Task Force 77 and they had been sent to destroy the communist-held bridges at Toko-ri.

Toward the center of this powerful assembly rode two fast carriers, the cause of the task force and its mighty arm. Their massive decks pitched at crazy angles, which for the present made takeoffs or landings impossible. Their planes stood useless, huddled together in the wind, lashed down by steel cables.

It was strange, and in some perverse way resolutely American, that these two carriers wallowing in the dusk bore names which memorialized not stirring victories but humiliating defeats, as if by thus publishing her indifference to catastrophe and her willingness to surmount it, the United States were defying her enemies. To the east, and farther out to sea, rode the
Hornet
, whose predecessor of that name had absorbed a multitude of Japanese bombs and torpedoes, going down off Guadalcanal, while the inboard carrier, the
Savo
, would forever remind the navy of its most shameful defeat in history, when four cruisers sank helpless at
Savo
Island, caught sleeping by the audacious Japanese.

Now, as night approached the freezing task force, the bull horn on the
Savo
rasped out, “Prepare to launch aircraft!” And it was obvious from the way her deck was arranged that the carrier already had some planes in the skies over Korea, and every man who watched the heaving sea wondered how those planes could possibly get back aboard.

The bull horn, ignoring such problems, roared, “Prepare to launch helicopter!” and although the deck pitched in abandon, rotors began to turn, slowly at first and then with lumbering speed.

Now the great carrier struck a sea trough and slid away, her deck lurching, but relentlessly the bull horn cried, “Move jets into position for launching,” and the catapult crew, fighting for footing on the sliding deck, sprang swiftly into action, inching two heavy Banshees onto the catapults, taking painful care not to allow the jets to get rolling, lest they plunge overboard with some sudden shifting of the deck.

The doctor, who had to be on deck in case of crash, looked at the heaving sea and yelled to the crane operator, “They may launch these jets, but they’ll never get ’em back aboard.”

The craneman looked down from his giant machine, which could lift a burning plane and toss it into the sea, and shouted, “Maybe they’re planning to spend the night at some air force field in Korea. Along with the ones that are already up.”

But at this instant all ships of the task force swung in tight circles and headed away from the open sea, straight for the nearby cliffs of Korea, and when the turn was completed, the deck of the
Savo
mysteriously stabilized. The effects of wind and sea neutralized each other, and planes returning from the bombardment of Korea now had a safe place to land.

But before they could do so the bull horn cried eerily into the dusk, “Launch helicopter!” and the crazy bird, its two rotors spinning so slowly the blades could be seen, stumbled into the air, and the horn cried, “Launch jets!”

Then, as the great carrier rode serenely amid the storms, the catapult officer whirled one finger above his head and a tremendous, almost unbearable roar arose and twin blasts of heat leaped from each Banshee, burning the icy air more than a hundred feet aft. Now the officer whirled two fingers and the roar increased and white heat scorched the deck of the carrier and the twin engines whipped to a meaningless speed of 13,000 revolutions a minute and the Banshee pilot, forcing his head back against a cushion, saluted and the catapult officer’s right hand whipped down and the catapult fired.

Nine tons of jet aircraft were swept down the deck at a speed of more than 135 miles an hour. Within less than 150 feet the immense Banshee was airborne, and by the time it reached the forward edge of the carrier, it was headed toward its mission. Four times the catapults fired and four times heavy jets leaped into the darkening sky and headed for the coastline of Korea.

As soon as they had left, the bull horn wailed, “Respot planes.
On the double.
We must recover the Korean jets immediately.”

When this announcement was made thirty old-fashioned propeller planes were already lashed down on the after part of the flight deck in precisely that area needed for landing the jets which now appeared overhead. The prop planes had been stowed there to permit catapult take-offs, and now they must be moved forward. So on the wooden deck, swept by icy winds, hundreds of young men in varicolored uniforms sped to the task of clearing the landing space. Men in green stowed the catapult gear so that no remnant of the powerful machine was visible. Other men in yellow leaped upon the deck and began to indicate the course each plane must follow on its way to forward stowage. Dozens of tough young men in blue leaned their shoulders against the planes, swung them laboriously into position and pushed them slowly into the biting wind. In blazing red uniforms other men checked guns or fueled empty craft while plane captains in brown sat in cockpits and worked the brakes to prevent accident.
Darting about through the milling, pushing, shouting deck hands three-wheeled jeeps of vivid yellow and lumbering tractors in somber gray hurried to their jobs, while over all towered the mighty arms of the enormous black and sinister crane.
Behind it lurked two weird men in fantastic suits of ashen gray asbestos, their faces peering from huge glassine boxes, ready to save the pilot if a crashed plane should burn, while in back of them, clothed in snowy white, the doctor waited, for death was always close upon the carrier deck.

So in an age of flight, in the jet age of incredible speed, these men pushed and pulled and slipped upon the icy deck and ordered the heavy planes with their bare hands. Upon trailing edges burdened with ice they pushed, their faces open to the freezing wind, their eyes heavy with frozen salt and the knuckles of their hands covered long since with protecting scars. And as they moved, their bright colors formed the pattern of a dance and after they had swarmed upon the deck for some minutes the
Savo
was transformed and from the lowering shadows the jets prepared to land.

This intricate operation was guided by one man. From the admiral’s country he had directed the task force to run toward the communist coast. The last four jets had been dispatched at his command. He had placed the ships so that the operations of one would not trespass the allotted space of the other, and it was his responsibility to see that his carriers faced the wind in such position that smoke trailed off to one side rather than directly aft and into the faces of incoming pilots. Now he stood upon his bridge and watched the mountains of Korea moving perilously close.

Admiral George Tarant was a tall narrow man with a sharp face that was sour and withdrawing like those of his Maine ancestors. Battle-wizened, he had fought the Japanese with his own carrier at Saipan, at Iwo Jima and at Okinawa, where his austere and lonely presence had brought almost as much terror to his own fliers as it had to the enemy.

He was known through the navy as George the Tyrant, and any aviator who wanted to fetch a big laugh would grab a saucer in his left hand, a coffee cup in his right, lean back in his chair and survey the audience sourly, snorting, “Rubbish.” Then the mimic would stare piercingly at some one pilot, jab the coffee cup at him and growl, “You, son. What do you think?”

But men who served with Tarrant soon forgot his tyranny and remembered his fantastic skill in operating a task force. His men said flatly, “He can do it better than anyone else in the world.” He knew the motion of the sea and could estimate whether a morning swell would rise to prevent recovery of afternoon planes or subside so that even jets could land freely. He was able to guess when new gales of bitter Siberian air would rush the line of snowstorms out to sea and when the snow would come creeping softly back and throw a blizzard about the task force as it slept at night. And he had a most curious ability to foresee what might trouble the tin-can sailors serving in the remote destroyers.

He fought upon the surface of the sea and in the sky. He sent his planes inland to support ground troops or far out to sea to spot Russian submarines. His was the most complex combat command of which one man’s mind was capable and on him alone depended decisions of the gravest moment.

For example, the position he was now in, with mountains closing down upon him, was his responsibility.
Early that morning his aerologist had warned, “Wind’s coming up, sir.
You might run out of ocean by late afternoon.”

He studied the charts and growled, “We’ll make it.”

Now his navigator warned, “We can’t hold thus course more than sixteen minutes, sir.” The young officer looked at the looming coastline as if to add, “After that we’ll have to turn back and abandon the planes.”

Dead Love by Wells, Linda
We Won't Feel a Thing by J.C. Lillis
Fascination -and- Charmed by Stella Cameron
Sacred Is the Wind by Kerry Newcomb
Loving The Country Boy (Barrett's Mill Book 4) by Mia Ross
Best Friends For Ever! by Chloe Ryder
A Very Russian Christmas by Krystal Shannan
Sarah Mine by Colton, Riann
East by Edith Pattou
All Hallows Heartbreaker by Delilah Devlin
Our partner