Read The Burglar in the Library Online

The Burglar in the Library 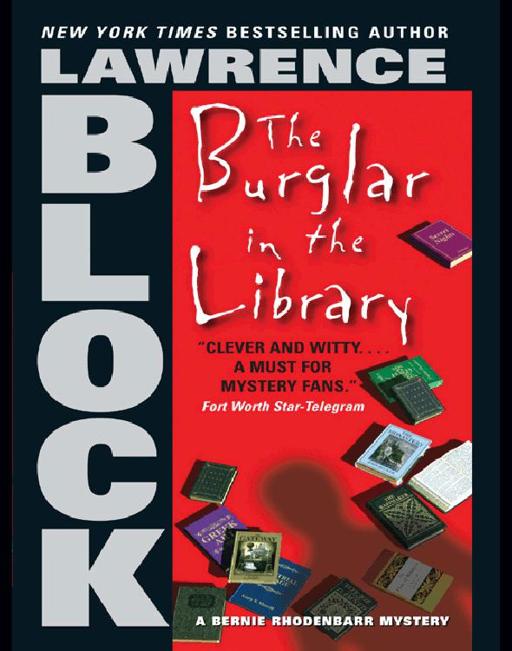 The Burglar in the Library
LAWRENCE BLOCK

At three in the afternoon on the first Thursday in…

I should start at the beginning.

That was Tuesday night. The following day Carolyn bought the…

Chandler never mentioned a second meeting, I told Carolyn, and…

We had a short wait on the platform at Whitham…

After dinner we drifted from room to room, getting our…

Our next stop was the library. I’d already seen a…

Let’s say you had this old tweed jacket.

The bookshelves in the Great Library of Cuttleford House extended…

I stayed where I was, under the watchful gaze of …

The library, when I finally got to it, was dark.

Any number of things can set a person screaming. A…

What we needed to do, Nigel Eglantine insisted, was remain…

Thinking back, I saw how close Carolyn had come to…

There were no screams or gasps in response to Nigel’s…

“She was a good cook,” Cissy Eglantine said.

“Jonathan Rathburn,” Nigel Eglantine said, and put the tips of…

Dinner, it turned out, was the joint effort of Cissy…

It was around seven in the morning when Carolyn Kaiser…

At least that’s how I figure it went.

There was a sound that may have been Carolyn catching…

They were all in the library.

It was Earlene Cobbett, of course, and I’ll spare you…

“That’s it,” Littlefield said. “Lettice, grab your coat. We’re out…

Four days later I was perched on a stool behind…

OTHER BOOKS BY LAWRENCE BLOCK

A
t three in the afternoon on the first Thursday in March, I got Barnegat Books settled in for the weekend. I dragged my table of bargain books inside, closed the door, and turned the cardboard sign in the window from
OPEN
to
CLOSED
. I ran the cash-register tape—the work of a moment, alas—and took the checks to my desk in the back room, where I filled out a deposit slip and prepared a mail deposit. I returned with a box a little over a foot in length. It was shaped like a little house in a child’s drawing, peaked roof and all, with a handle where the chimney ought to be. I opened the hinged top, set it on the floor, and looked around for Raffles.

He was in the window, treating himself to a few rays. I called his name, which might have worked if he’d been a dog, but he’s not and it didn’t. Raffles is a cat, a declawed unmanned tailless gray tabby, and if he even knows his name he’s not letting on. True to form, he didn’t stir at the sound of
my voice, but lay motionless in what little sunlight there was.

So I crumpled a sheet of paper, and that worked. We have a training ritual that involves my hurling paper balls for him to run down and kill. It probably looks like a game to the casual observer, but it’s serious business, designed to sharpen his mousing skills. I guess it’s working; I stopped finding gnawed book spines and suspicious organic matter on my shelves the day he moved in.

I threw the ball of paper and he was off and running. He had it before it stopped rolling, sank the memory of his claws deep into it, took it in his mouth, shook it fiercely to and fro, and left it for dead.

A dog would have brought it back so I could throw it again. A cat wouldn’t dream of it. “Good job,” I said, and crumpled a fresh sheet, and he made another clean kill. I congratulated him again, prepared a third paper ball, and tossed it gently into the open cat carrier.

A few minutes later there was a knock on my door. “We’re closed,” I called out without looking. My eyes were on Raffles, who had removed himself to an open spot in the Philosophy & Religion section, on the same high shelf with the bust of Immanuel Kant.

The knock was repeated, and so was my response. “Closed for the weekend!” I sang out. “Sorry!”

So I looked, and of course it was Carolyn, looking larger than life in a down-filled parka. There was a suitcase at her feet and a frown on her brow. I let her in and she blew on her hands and rubbed them together. “I thought you’d be ready by now,” she said. “We’ve got a train to catch, remember?”

“He won’t get in the cat carrier.”

She looked at me, then at the cat carrier, then bent over to retrieve two paper balls from it.

“I thought maybe I could get him to jump in after them,” I said.

“You thought that, huh?”

“He’s sitting up there with the father of the categorical imperative,” I said. “Which figures, because it’s imperative that he get in the cat carrier, and he’s categorically opposed to it. I don’t know, Carolyn, maybe it’s a mistake to take him. We’re only going to be gone three nights. If I put out plenty of food and water for him, and leave the radio on to keep him company…”

She gave me a look, shook her head, sighed, and clapped her hands fiercely together, calling the cat’s name in a loud voice. Raffles sprang down from his perch and flattened himself against the floor. If he’d lowered his center of gravity one more inch he’d have been in the basement.

She bent over, picked him up, and put him in the carrier. “Now you stay there,” she told him, in a tone that brooked no argument, and snapped the lid shut to give him no choice in the matter. “You
can’t con them into it,” she explained. “You have to get physical. Ready, Bern?”

“I hope that coat’s warm enough. The temperature must have dropped twenty degrees since lunch. And the forecast’s calling for snow north of the city.”

“It’s March already. I know the groundhog saw his shadow, but the extra six weeks of winter are almost up. Even if we do get a little snow, it won’t stick around long.” I took my suitcase in one hand and Raffles’s carrier in the other and let Carolyn hold the door for me. Outside, I went through what you have to go through to close up a store in New York, hauling the steel gate across, fastening innumerable padlocks. These chores are best performed barehanded, and by the time I was done my fingers were numb.

“It’s cold, all right,” I admitted. “But we’ll be cozy at Cuttleford House. Snow on the roof, a fire on the hearth—”

“Kippers for breakfast. Afternoon tea with cream and clotted scones.” She frowned. “Is that right, Bern? Or should it be the other way around?”

“No, it’s right. Kippers for breakfast, scones for tea.”

“I know that part’s right,” she said. “It’s just a question of which is supposed to be clotted, the cream or the scones, and I’m pretty sure it’s the cream. ‘Scones and clotted cream.’ Yeah, that sounds better.”

“Either one sounds good about now.”

“And all those other great English dishes. Bangers and mash, bubble and squeak, toad-in-the-hole. What exactly
is
toad-in-the-hole, Bern, do you happen to know?”

“It always makes me think of
The Wind in the Willows.
I bet it’s good, though, and it makes you feel all safe and secure and cozy when you eat it. How about bubble and squeak, Bern? Any idea what that is?”

“Maybe it’s the sound the toad makes,” I suggested, “when you yank him out of the hole.”

“And sherry trifle,” she said. “That’s a dessert. I know that much.”

“It sounds like a frivolous girl,” I said. “‘Sherry Trifle—she’ll boost your blood sugar while she breaks your heart.’”

“Reminds me of a little cupcake I met a couple of weeks ago at Pandora’s.”

That was a conversation stopper, all right, and for the next hour or so neither of us said very much. We caught a cab to Grand Central and a train to Whitham Junction, where we’d transfer to a spur line leading north and east to Pattaskinnick, a hamlet nestled at the juncture of New York, Connecticut, and Massachusetts. There we could hire a taxi to carry us the last three or four miles to Cuttleford House.

On the way up to Whitham Junction we sat on the left-hand side of the train so that we could look out the window at the Hudson. Two of our three
pieces of luggage rode in the rack overhead. The third rested on the floor between my feet, emitting an occasional meow.

“It’ll be close enough, Bern. Raffles, there might even be some genuine English mice for you.”

“There’s a charming thought,” I said. “I hope they haven’t spent the past fifty years grazing on the library.”

“If it’s a real English country house,” she said, “they’ve got cats of their own.”

“I’m sure they’ll be thrilled to see Raffles.” I nudged his case with my foot. “I don’t see why we had to bring him. He was perfectly comfortable at the store.”

“You left your cats.”

“Ubi and Archie have each other for company. Besides, Fred from across the hall is going to pop in once a day to feed and water them. I’d have done the same for Raffles, but since you invited me along—”

She patted my hand. “Incidentally,” she said, “I really appreciate it, Bern. It’s great of you to bring me.”

“I guess that wouldn’t be much fun.”

“I’d go nuts,” I said. “Just sitting around twiddling my thumbs, waiting for the scones to clot.”

“Whatever. You’re my best friend, Carolyn. There’s nobody I’d rather be taking to Cuttleford House.”

“That’s a sweet thing to say, Bernie. Even if it’s not exactly true.”

“Bern,” she said, “let’s have a quick reality check here, okay? A romantic weekend at an English country house in the dead of winter—”

“Forget the calendar, Bern. It’s too cold to go for a walk in the woods. There’ll be a fire on the hearth and frost on the counterpane.”

“A counterpane’s like a bedspread,” I said, “and I hope there won’t be any frost on ours.”

“Well, you know what I mean. Now go ahead and tell me you wouldn’t rather be spending the weekend with a beautiful woman.”

The conductor came through. “Next stop Whitham Junction,” he announced. “Change here for…” and he named a string of places no one ever heard of, Pattaskinnick among them. Carolyn nudged me and pointed out the window. Snow was falling.

“I think it’s beautiful,” she said, “and I hope it doesn’t stop. I hope it snows all weekend.”

I might have bridled at that if I’d been paying attention. But my mind was otherwise engaged, so much so that I missed what she said next. When I’d let a couple of lines pass without comment, she said, “Bernie?”

“Sorry. I guess I was lost in space.”

“Uh-huh. It’s okay, Bern. It’s only natural. You took a real shot to the heart, and now you’re on this trip with me instead of her, and it stands to reason you’re going to spend a certain amount of time mooning over the woman.”

“I don’t think I was mooning,” I said. “As a matter of fact I wasn’t thinking of Miss Lettice Runcible at all.”

I stood up, got our bags down from the overhead rack. “As it happens,” I said, “I was thinking of Raymond Chandler.”

Ria Cantrell - Celtic Storm 03 by Knight Storm
Color Blind by Gardin, Diana
When No One Was Looking by Rosemary Wells
Mr Badger and the Missing Ape by Hobbs, Leigh
The Best of Planet Stories, No. 1 by Leigh Brackett, editor
The Corrections: A Novel by Jonathan Franzen
The Commander's Desire by Green, Jennette
The Scoundrel's Bride by Geralyn Dawson
Double Alchemy: Climax by Susan Mac Nicol
Savage Enchantment by Parris Afton Bonds
Our partner