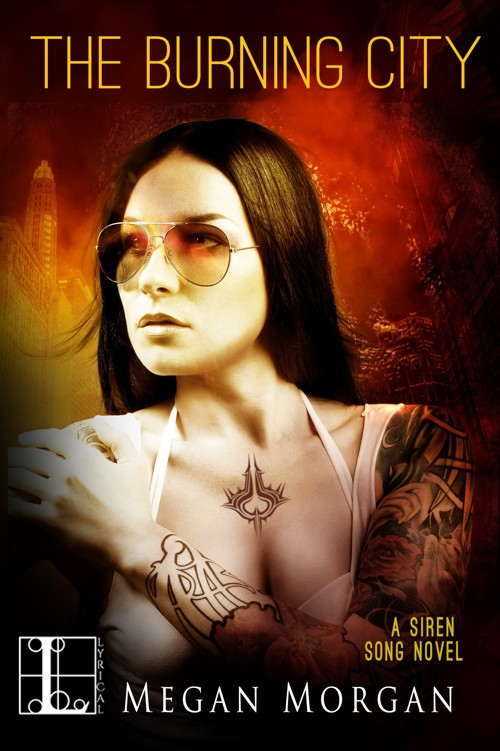 When the smoke clears, who will be left standing?

Tattoo artist June Coffin has another, more hidden talent: she’s a Siren who can influence people with the sound of her voice. But in the wake of a murder and shake-up at the Institute of Supernatural Research, her own powers are starting to kill her. The only chance she has of saving herself—as well as her kidnapped brother and best friend—is to become a vampire. But joining the ranks of the vengeful vamp, Occam Reed, is the last thing June wants to do.

Occam isn’t the only danger June needs to worry about. Power hungry telepath Robbie Beecher will stop at nothing to gain control over Chicago. He’ll destroy anyone who gets in his way—and June’s lover, Sam, is high on the hit list since his bid for Mayor. With the city and June’s heart being pulled in different directions, it’s only a matter of time before the powder keg explodes…and time isn’t something June has much of left. With a city on fire, can she rise from its ashes?

On June Coffin’s first official day of liberation, the day she could finally show herself to the world without fear of repercussion, she stood in a cemetery under the blazing July sun sweating her ass off—literally. Sweat trickled down the crack of her ass, and she struggled not to squirm.

Despite the venue, the conservative black dress she wore wasn’t for mourning but to cover the majority of her tattoos. God forbid she appear anything but vanilla and meek on this day when the Chicago public would turn out to pity her. She’d been shot, hunted, taken prisoner, and unfairly maligned during the past six months, but being digestible for the viewing public remained priority number one.

Sam Haain, her boyfriend—God, that was weird to say—stood a few yards away in front of a pillar gravestone. He had dressed up too, in a suit and tie. She’d never had a thing for men in suits, but the way he wore his changed her mind. Maybe he’d had it tailored, or maybe he just possessed a body made for a suit. He’d pulled his long dark hair back, because propriety, after all. Their handlers had warned them repeatedly they needed to be “professional and presentable.”

“How much time do we have?” she asked Aaron Jenkins, who stood beside her.

Aaron also wore a suit, nearly the same shade of gray as his hair; however, she rarely saw him in less.

“Twenty minutes before we absolutely must be on our way.” He squeezed her arm. “I’ll wait in the car.”

He walked back toward the black limousine parked on the pathway. He hadn’t approached the pillar, despite the fact his daughter lay beneath it.

June fanned herself. Her tits were sweating too. Wearing a bra sucked.

She walked over to Sam. His hands were tucked in his pants pockets. He’d taken his sunglasses off, and they dangled out of one pocket, his thumb hooked around them.

The pillar was slender and tapered as it rose, with an ornamental orb on top. The white granite glittered in the sunlight. The words “Mary Ellen Jenkins” had been carved into the base of the stone. June had known her only as Muse, and only heard her real name for the first time after she died.

Muse had been born in 1986. Twenty-eight, a year younger than June.

“Yeah, it’s nice.” Sam pulled his hand out of his pocket and slipped his arm around her shoulders. “Simple and graceful. She’d like it.”

June leaned against his side, her head barely reaching his shoulder. Tall men gave her a reason to like being short.

“She didn’t, actually. She hated it. She said it made her look like a ghost.”

June tilted her face up.

Sam squinted at her. He had a strong jaw and dark eyes, was clean-shaven, and had a copper tint to his skin. Over the past month, as her emotions had grown stronger, his features seemed to stand out clearer in her love-addled vision.

“It was her condition,” he said. “Most dyes gave her a rash. Her autoimmune response was out of whack.”

June struggled for something to say. So many revelations about Muse. But then, June hadn’t really known her. She’d wanted to, more than ever now that she was gone. June regretted deeply she hadn’t tried to get to know her better when she was alive.

“Wow.” June focused on the pillar. “She suffered a lot, didn’t she?”

“She did.” Sam’s voice was hushed, as hushed as the sprawling somber yard around them. “This is the first time I’ve gone out to meet the public without her.” He wormed his fingers under the shoulder of June’s dress. “She won’t be there to watch my back. It makes me nervous.”

Muse had kept Sam safe with her mindreading, and when necessary, her knives. Going out in public without her made June uneasy as well.

“I doubt anyone will try to hurt us,” June said. “After all, we’ve gone from villains to heroes. The biggest challenge we’ll face is resisting the urge to tell everyone to eat shit.”

“You should probably let me do most of the talking.” He tugged her bra strap.

She swatted his hand. “Stop it. And I plan to say as little as possible.”

“I’m sure it’s Aaron and me they’ll want to talk to the most.” He released the strap, making it snap her shoulder. “You look nice, by the way.”

She yanked at the sides of her dress, wiggling it down over her hips. The fabric was form fitting and sheer, supposedly to make it cooler. False advertising.

“This is ridiculous,” she complained. “I’m the victim. Why do I have to be presentable? I can’t believe they told me to take out my piercings too. I didn’t take my posts out, though. That’s why I have to wear a bra. God forbid anyone sees my nipples.”

“They should be honored to see your nipples.” He glanced down. “What about the other one? Did you take that out?”

She pushed her sunglasses up her nose. “Of course, because I plan on flashing my vagina at the crowd.”

He pulled her against him and kissed the top of her head. She had her hair pulled up, and at least that looked cute. Her first indulgence once she got out of hiding had been to have her hair done. The light brown roots were gone, all of it a nice solid black again. She’d been tempted to add some unnatural color as well, a few streaks, but ultimately decided against it. After all she’d been through, she wasn’t feeling the punk vibe. Her mother would be relieved.

“Are you ready for this?” he murmured against her hair. “It’s going to be a circus, you realize.”

“No, but it’s too much to hope they’d let us get back to our lives in peace. Or, as much peace as possible. Just leave us alone and let us find Robbie and Occam.”

Her stomach lurched at speaking the vampire’s name. Her brother, Jason, and best friend, Diego, had been Occam’s prisoners for over a month now—longer than her brother had been held captive at the Institute. She had to make a choice soon: let Occam turn her into a vampire, or let him end their lives. Not a choice she could even remotely come close to making.

She prayed every day that he held them prisoner as disinterestedly as he’d held Micha Bellevue before them. A dirty mattress and bags of chips for sustenance was better than the other possibilities.

“Of course they can’t leave us be,” Sam said. “They need to ask us what it was like to be hunted and lied about for months on end. That’s the human interest part.”

“I wouldn’t call that human.”

“You realize it will be a long time before our lives get back to normal. Even if we hunt Robbie and Occam down tomorrow. Even if I kill that monster and you get Jason and Diego back.”

She looked down at her feet cushioned in the bright green grass, her bare toes peeking from her black flats. She wouldn’t risk wobbling around on heels in front of a crowd. Her toenails were painted black, her one “screw you” to the polite world.

“I know,” she said. “I don’t know that we’ll ever be normal again. But I’ve come to terms with that.”

“After today, we’ll at least be out of FBI custody.”

She lifted her head and took in the graveyard. The world was a cemetery, and in the end, that was where they’d end up. She would make her own gravestone, though.

“We just have to get through this,” she said. “So we can begin doing what needs to be done.”

He rubbed her back. “Don’t worry. I have a little surprise.”

“You know if I have an audience, I’m going to talk.” He slipped his sunglasses on and tugged at the lapels of his jacket. “They should know better than to put me on a stage.”

“Sam. What are you planning?”

“Something I’ve been thinking about for a long time.” He looked at the pillar. “Something I discussed with her. She’d be proud.”

He smoothed his tie. “You’d better get used to this. They’ve kept me in the shadows way too long. I’m going to run my mouth all I want. They owe me that.”

She put her hands on her hips.

“You should take advantage of it too,” he said. “They’re giving us a platform to air our grievances.”

“Tell me what you’re planning. I don’t want to be caught off guard.”

He smirked smugly. Once, she’d wanted to slap that smirk off his face. She still did, but she would do it lovingly. Despite all the crap he’d been through lately, his self-assured punchy attitude hadn’t dulled.

“You should fix your lipstick,” he said. “You want to look your best for the gawkers, don’t you?”

She touched her lips. “What’s wrong with my lipstick? I just put it on before we—”

He swept in and kissed her, hard. She made a sound between an angry yelp and a grunt into his mouth and pushed at his chest. When he stepped back, his lips were smeared with her bright red lipstick.

He wiped his mouth with the back of his hand. “Like I said, fix your lipstick.”

She huffed. “Way to be disrespectful, you friggin’ meathead. Right on top of her grave.”

Dance of the Stones by Andrea Spalding
The Brothers of Glastonbury by Kate Sedley
Alternate Worlds: The Fallen by Kaitlyn O'Connor
Sloppy Seconds: The Tucker Max Leftovers by Tucker Max
The Puffin of Death by Betty Webb
Puritan Bride by Anne O'Brien
A Girl Between by Marjorie Weismantel
Privileged to Kill by Steven F. Havill
Untamed by Hope Tarr
One Smooth Move by Matt Christopher
Our partner