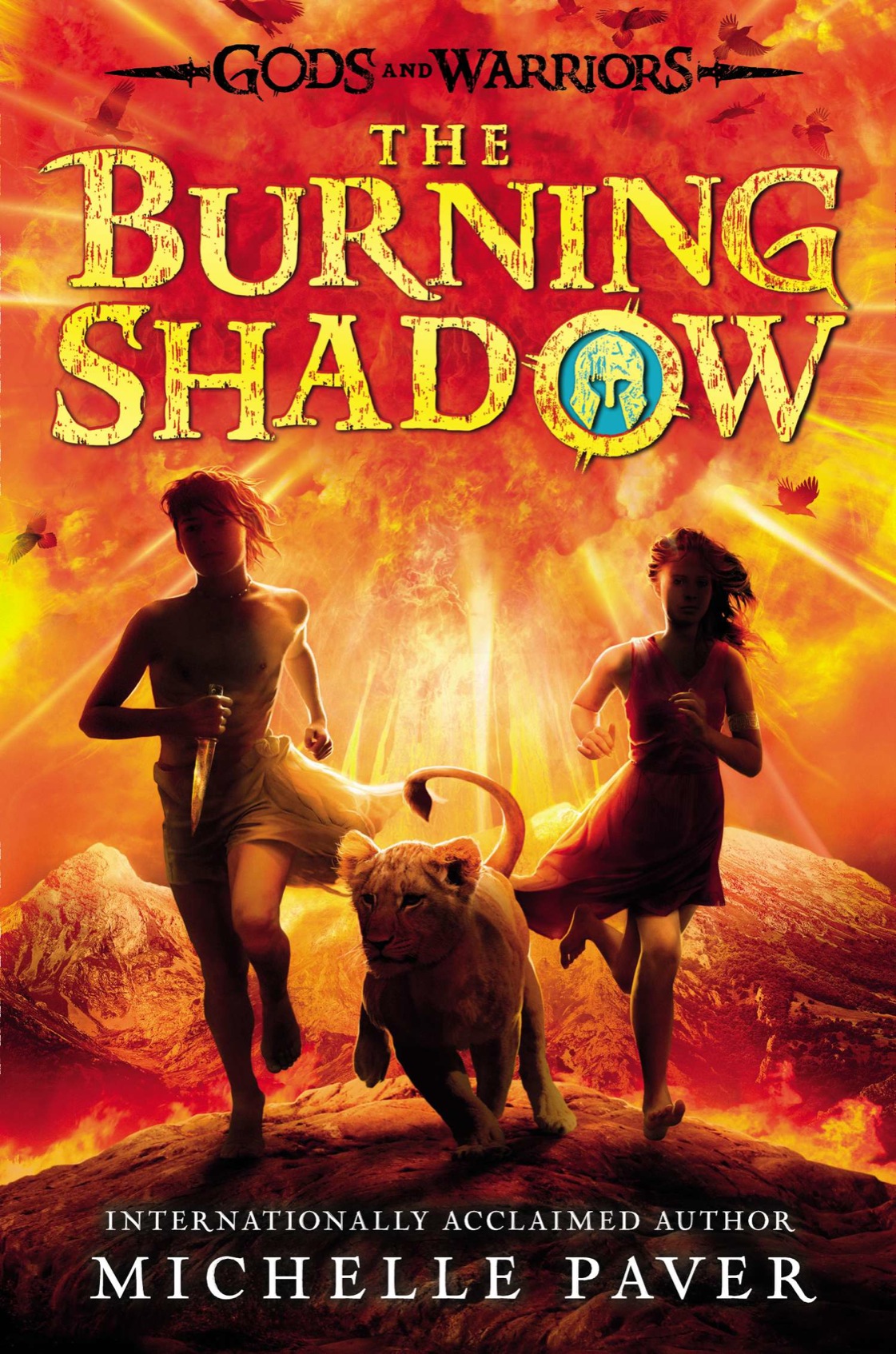 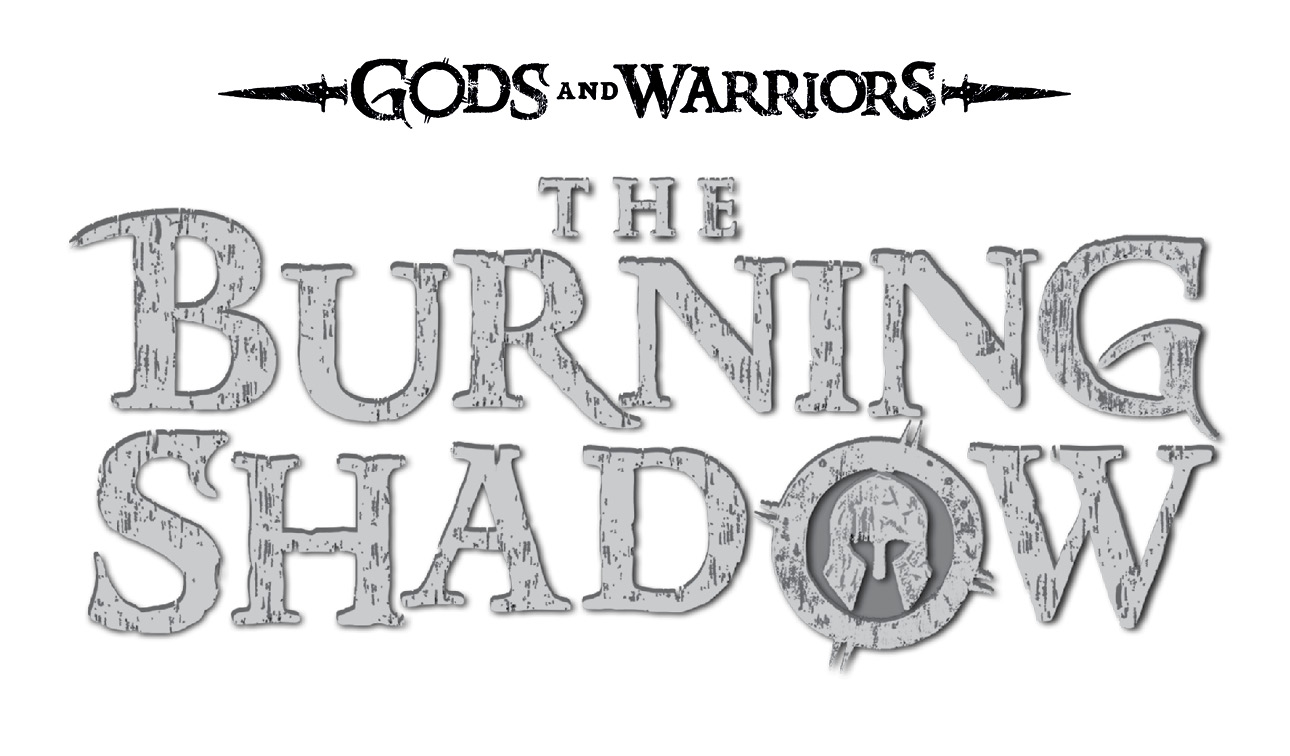 The burning shadow / by Michelle Paver.

Summary: “In his search for his sister, Issi, Hylas is kidnapped and sold into slavery and

must escape the Crows with the help of his friend Pirra and a lion cub”âProvided by publisher. 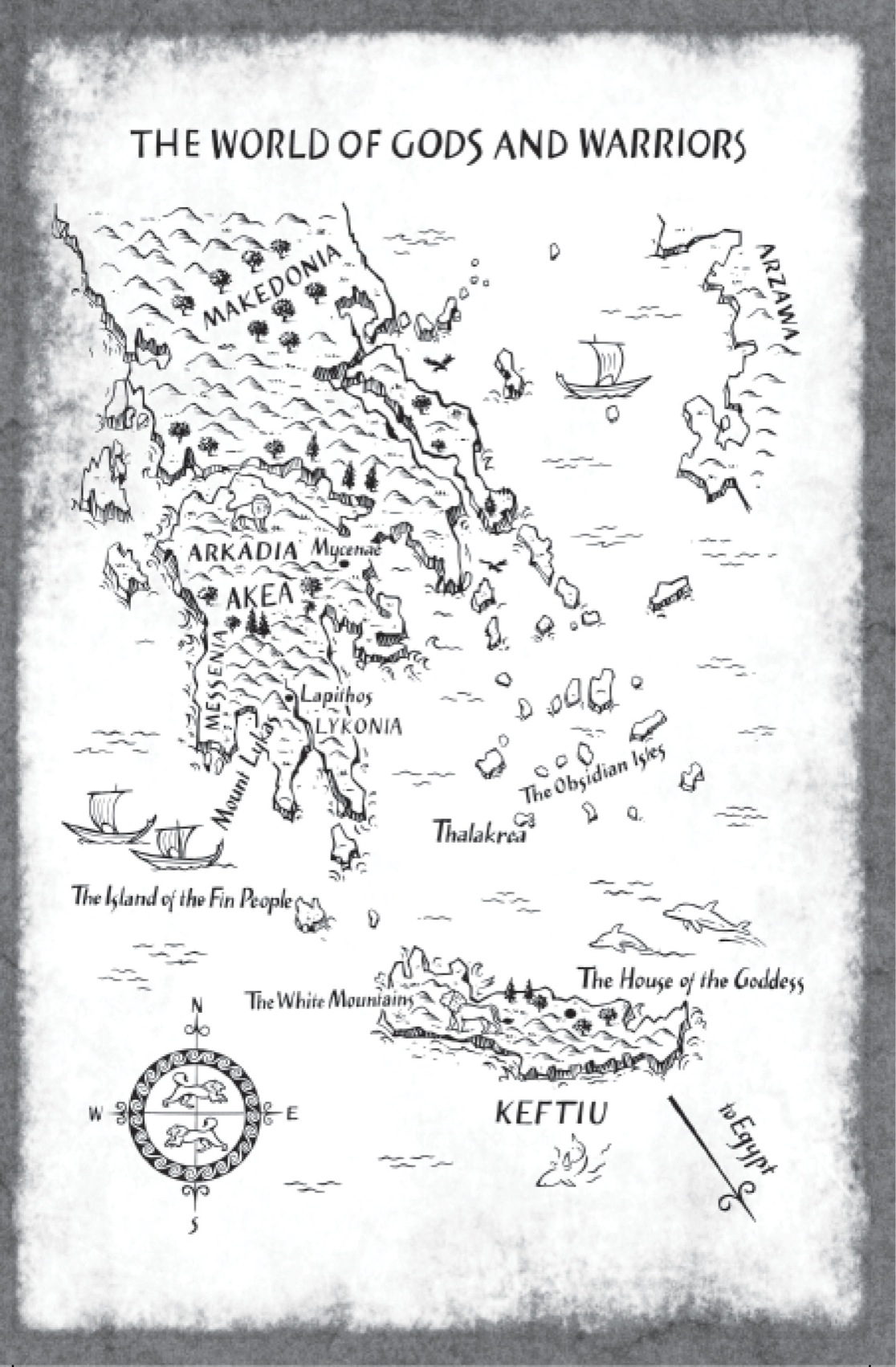 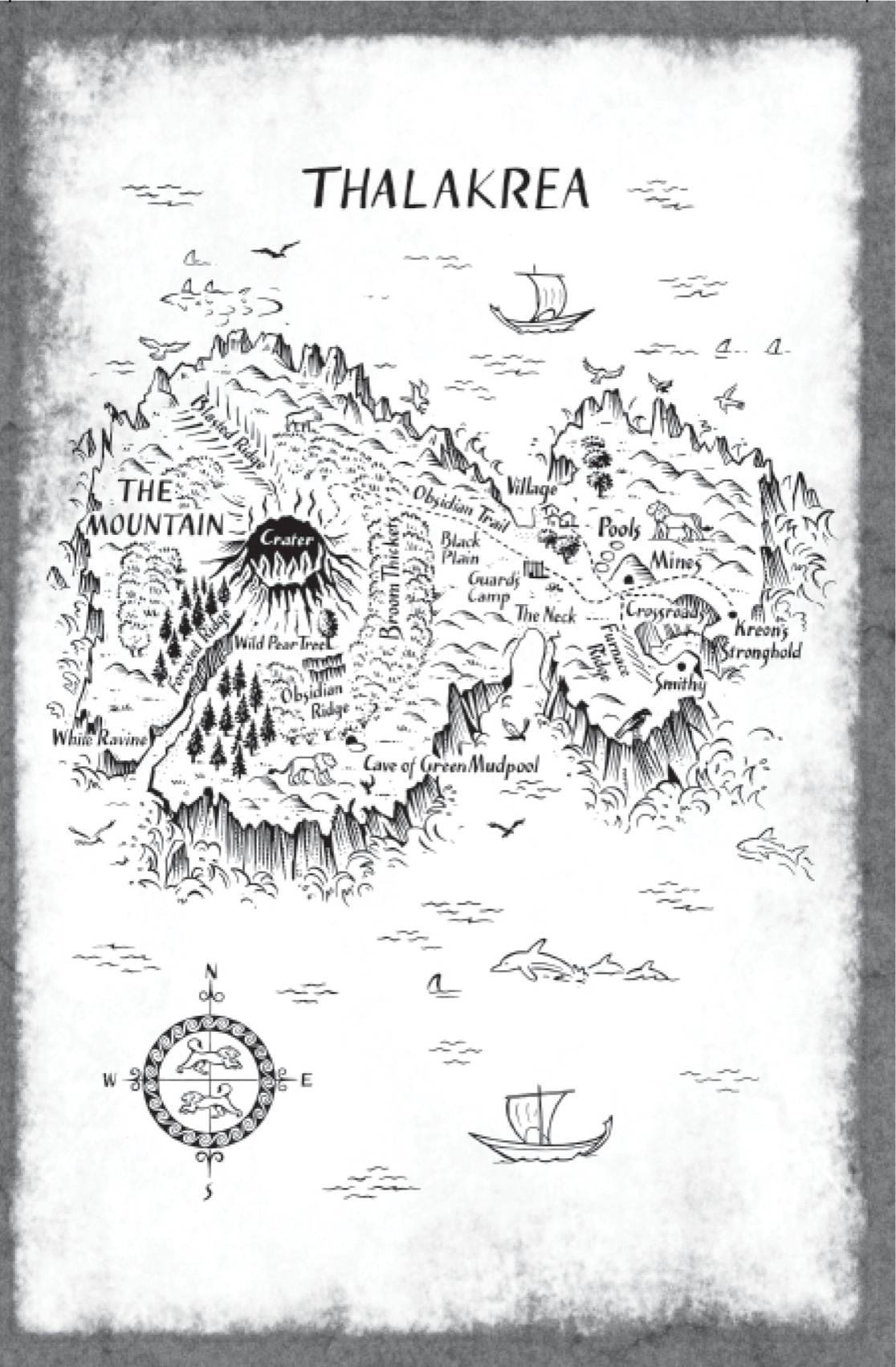 The boar threw him an irritable look and went on wallowing in the mud. She and her piglets were having a lovely time at the spring, and she wasn't going to make room for some scrawny boy who needed a drink.

A chill east wind tore across the hillside, rattling the thistles and probing the holes in Hylas' tunic. He was tired, footsore, and his waterskin had been empty since last night. He had to reach that spring.

Loading a pebble in his slingshot, he landed the boar a smack on the rumpâwhich she ignored. He blew out a long breath. Now what?

Suddenly the boar scrambled to her feet, jerked up her tail, and fled, with her piglets racing after her.

Hylas dropped to a crouch behind a thornbush. What had she sensed?

At that moment, the wind dropped to nothing. The hairs on the back of his neck rose. The silence felt thick and strange.

The lion came out of nowhere.

Bounding down the slope above him, it halted two paces from where he hid.

He didn't dare breathe. The lion was so close that he could smell the musky heat of its fur, and hear the dust settling around its enormous paws. He saw how its tawny mane stirred in the windless air. Silently, he begged it to spare his life.

The lion turned its great head and looked at him. Its golden eyes were stronger than the Sunâand it
knew
him. It saw his spirit, like a pebble at the bottom of a deep, clear pool. There was something it wanted him to do. He didn't know what, but he felt its command.

Again the lion lifted its head and tasted the air. Then it bounded down the hill. Hylas watched it leap a clump of boulders and land without a soundâthen vanish into a thicket. Now all that was left was its musky scent and the prints of huge paws.

The wind returned, hissing dust in Hylas' eyes. Shakily, he rose to his feet.

Near the spring, the lion's tracks were filling with water. Hylas knelt by a paw print as big as his head. Water from the paw print of a lion gives you strength. He stooped and drank.

Something heavy smacked into him and knocked him off his feet.

“That might've made you stronger,” said a voice, “but it didn't make you lucky.”

“Where are they taking us?” moaned the boy next to Hylas.

No one answered. No one knew.

The ship was packed: ten slaves tied to the oars on either side, twenty huddled on deck, and eight fat overseers with copper-tipped whips.

Hylas sat crammed against the side of the creaking, pitching vessel. His wrists throbbed, the rawhide collar was chafing his neck, and his scalp hurt. Two days before, one of the slavers had hacked his fair hair short.

“Where you from?” the slaver had barked, stripping him of his gear and tying him up with brutal efficiency.

“He's on the run,” his companion had muttered, peeling back Hylas' lips to check his teeth. “You can always tell.”

“That true, boy? Why're you missing a bit of your ear? They do that to thieves where you're from, eh?”

Hylas had stayed grimly silent. He'd paid a herdsman the last of Pirra's gold to cut off the bottom of his earlobe, because the notch in it would have marked him as an Outsider.

“He understood that,” said the smaller one, “so he must be Akean. Which part, boy? Arkadia? Messenia? Lykonia?”

“Doesn't matter,” the other growled. “He looks strong enough, he'll do for a spider.”

And who
were
they? They wore rough wool tunics and greasy sheepskin cloaks, more like peasants than Crow warriors; but they might be working for the Crows. They mustn't find out who he was.

A wave splashed him in the face, wrenching him back to the present. The boy beside him groaned and threw up in Hylas' lap.

The boy gave a feeble snarl.

Trying to ignore the smell of vomit, Hylas turned back to the Sea. The ship sat low in the water, and he'd been watching for dolphins. So far, nothing. He thought of Spirit, whom he'd befriended last summer. At least the dolphin was happy and free with his pod. Hylas clung to that.

And maybe far away on Keftiu, Pirra had managed to escape. She was the daughter of the High Priestess, and unimaginably rich, but she'd told him once that she would do anything to be free. At the time, he'd thought she was mad. Now he knew better.

A fin sliced the water, alarmingly close to where he sat. The shark fixed him with its lightless black eye and sank out of sight.

That's why no dolphins, thought Hylas. Too many sharks.

“That's the seventh since we set out,” said the man on the other side of the seasick boy. He had a broken nose that had set crooked, and there was a weariness in his brown eyes, as if he'd seen too many bad things.

“Why are they following us?” mumbled the seasick boy.

A whip cracked out and struck his cheek. “No talk!” yelled a fat-bellied overseer.

Blood trickled into the man's beard. His expression didn't change, but something in his stare told Hylas that he was picturing burying a knife in the overseer's hairy paunch.

Judging by the Sun, Hylas guessed that they'd been heading southeast since dawnâwhich meant a long way from Akea. He was furious with himself. All his efforts wiped out by a moment's carelessness.

Sorry, Issi, he told her in his head.

The familiar guilt gnawed at his guts. His one memory of his mother was of her telling him to look after his little sisterâand he'd failed. The night the Crows had attacked their camp, he'd decoyed them away, but afterward he hadn't been able to find Issi. Did she know that he'd done it for her? Or did she think he'd abandoned her to save his own skin?

That had been a year ago. Since then, all he'd found out was that Issi
might
be in Messenia, the westernmost chieftaincy of Akea. Last summer he'd bought passage on a ship, but it had wandered from island to island before putting in at Makedoniaâhopelessly far north.

For eight moons he'd struggled through an unknown land of hostile peasants and savage dogs: always in hiding, always on his own. The image of his fiery, talkative little sister had gradually faded, till he could scarcely remember her face. That frightened him more than anything.

He must have slipped into a doze, because he was woken by a ripple of apprehension among the slaves. They were approaching land.

In the red glare of sunset, Hylas saw a vast, black, cloud-wreathed mountain rising from the Sea. Its peak was weirdly flat, as if some god had lopped it off in a fit of rage.

Below it, he made out a bay of charcoal sand between twin headlands that curved inward, like jaws agape. As the ship slid between them, he heard the screams of seabirds and a din of hammers. He caught a strange smell, like rotting eggs.

Craning his neck at the western headland, he glimpsed smoky fires high on a ridge. On the opposite headland, a steep rocky hill was crowned by a massive stone wall spiked with torches, like all-seeing eyes. That had to be the stronghold of a chieftain. From there you'd have an eagle's view of the whole island. You'd see everything.

“What
is
this place?” whimpered the seasick boy.

The man with the broken nose had gone pale beneath his windburn. “It's Thalakrea. They're sending us down the mines.”

The man threw him a sharp look, but just then an overseer grabbed Hylas' collar and hauled him to his feet. “It's where you're going to spend the rest of your life.”