Read The Cartographer of No Man's Land: A Novel Online

The Cartographer of No Man's Land: A Novel 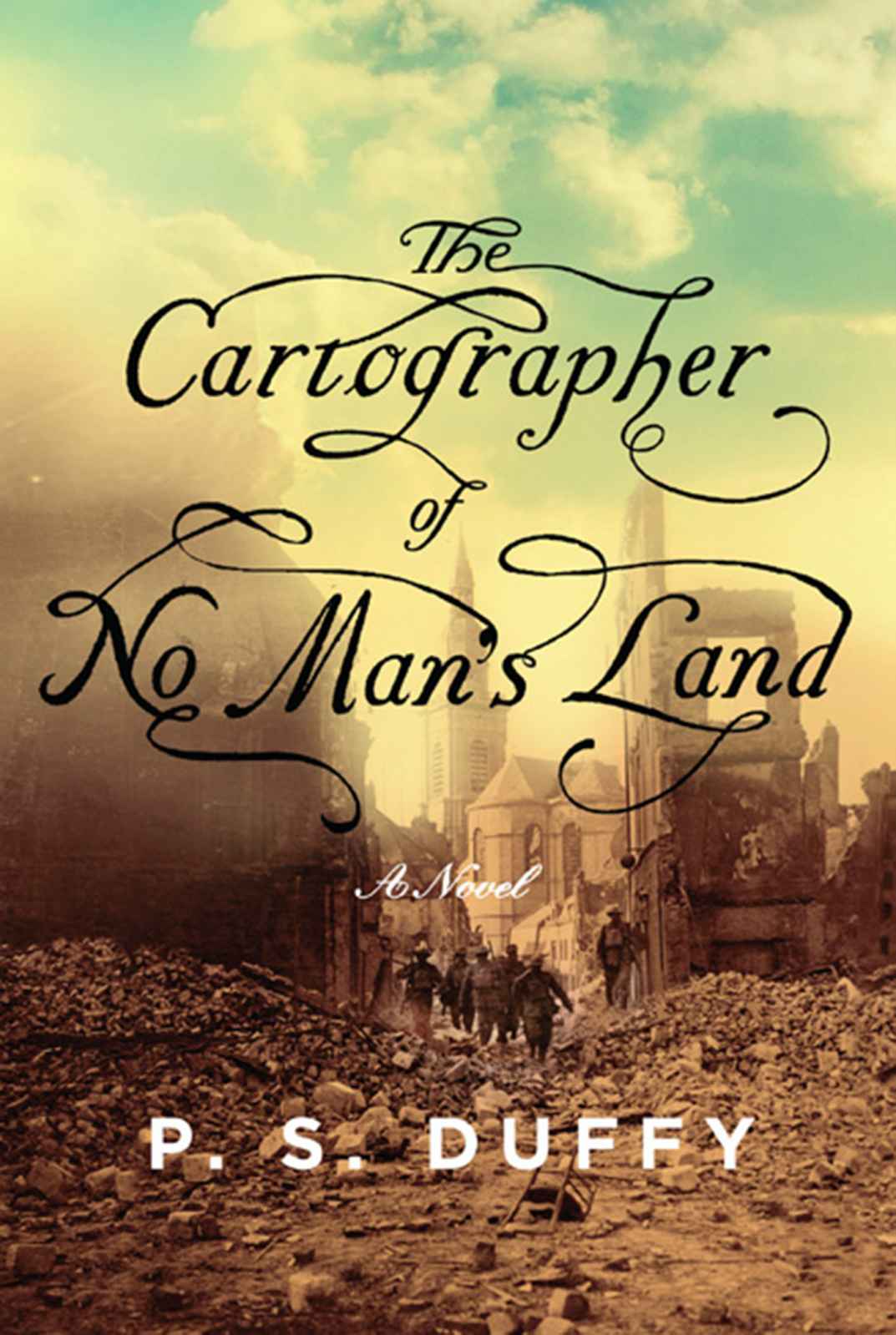 T
he boy had been laughing under the clouds on a flat gray sea as his father sang an old and funny song about all the fishes climbing upon the seaweed trees. But then the sun broke through in a banded stream that coursed across the water to their boat. His father stopped singing and stopped rowing and looked about. And the boy stopped swinging his legs beneath his seat and looked about as well. His hair ruffled in the breeze. All around them the sun revealed water dancing in a way not firmly lashed to the here and now. It mesmerized the senses, suffusing everything in its catchy-caught ripples upon the open water, so that there was nothing but the dance.

His father drew in the heavy oars, and the sound of their smooth, worn wood slipped into the boat. The light was golden against the floorboards. The spangled sea was so bright they could not tear their eyes from it—rippling, flickering, drawing them in. His father drew the boy toward him without taking his eyes off the silver sea. The boy turned between his father’s long legs and rested a small hand on his father’s knee. His father circled him with his arm and felt the boy’s heart beat into his hand.

In all this world there was only the gently rocking boat and dancing water. All time—past, present and future—gathered and expanded and released. There were no boundaries, and there was no fear of being without them.

The boy wanted to reach out to catch the water’s dance, but more than that he wanted to remain forever leaning lightly against the rough wool of his father’s shirt, with his father’s hand resting against his chest.

They stayed like that, the boy and his father, until a wide breeze blew over the boat, and his father said quietly, “We have witnessed God’s beauty, had an encounter with the Divine.” Or maybe that’s only what he thought. What he may have said was nothing at all as the breeze freshened and a deep blue returned to the water, and the waves grew rougher and stopped shimmering. He took up the oars and shoved them through the wooden pins. The boy turned and hopped back up on his seat. His father pulled in long smooth strokes and sang once again of all the fishes in the sea climbing upon the seaweed trees.

A
ngus MacGrath unbuttoned his greatcoat and leaned back against the one tree left on the bank of a river he did not know. Not far downstream, a private, standing waist-deep in the river, squeezed a bar of soap between his hands. It shot upward, and four or five other soldiers lunged for it, splashing and falling over themselves. Their uniforms, boots, and rifles lay in a heap by a jagged row of blackened tree stumps. Under a weak early morning sun, bands of mist rose from the cold river, occasionally engulfing the soldiers so that they took on a dream-like quality of white arms and torsos appearing and disappearing.

Above the river on a low stone bridge sat the engine of the troop train where, a day into their journey, it had lurched to a stop, unable or unwilling to carry on. Sunk between endless flat fields, the tracks ran east-northeast toward the Front. Angus flipped open his old pocket compass for confirmation, for comfort, really, and slipped it back in his pocket. He figured they’d be on the march soon, the engine still on the bridge.

While repairs were attempted, the ranks milled about the train, grousing over the delay, but grateful for it all the same. And for the sudden break in the weather. Housed in drafty huts in a camp thick with mud near Le Havre, most of them hadn’t bathed since they’d crossed the Channel and arrived on French soil five days earlier. Those in the river were taking up a challenge. “Baptism and bless me!” one shouted, wading in. “Sweet Jesus, it’s freezing!” cried another, plunging in after him. In the train, the owl-faced ranking officer drank steadily from his flask.

Like Angus, the boys in the river and those cheering them on from the bridge were fresh recruits from battalions broken up after training in England to be bled into existing battalions. Most would join the 61st. But Angus had been singled out and reassigned to replace a dead lieutenant in the 17th Royal Nova Scotia Highlanders—a decision no more random than any he’d encountered since joining up. If there was one thing Angus, now Lieutenant MacGrath, had learned, it was that there was no predicting how things would turn out. Of all the predictions he might have made, himself as an officer in the infantry was not among them.

In the state of suspension between the world as he’d known it and the absolute unknown, Angus considered the interplay of light and mist, the hazy edges, blank spaces and mute eddies at the river’s edge. Above him, the sky turned a gauzy gray, and a fine rain fell. He tipped his head back and closed his eyes.

Rain. It had been a constant in the collected bits and pieces of the past few months. It had slicked the deck of the ship that carried him to England and slanted in rushes off the tents in the camp where he’d held a rifle for the first time, adjusted to the heft and length and balance of it, and where, surprisingly, he’d found he was a good shot. And where, not surprisingly, he’d found a heady release in charging straw-filled burlap bags, bayonet plunging into their sodden bellies.

Rain and rage. Rain and regret. He’d been sent over with assurances in a letter from Major Gault to a Colonel Chisholm that he’d be a cartographer. In London. Behind the lines. But Gault was unknown to Chisholm, and there being no shortage of cartographers, Angus had been dispatched to the infantry, where shortages were never-ending. “The infantry?” A chasm of disbelief had opened up.

“You heard me,” Chisholm’s adjutant had snapped. “You can bloody well draw terrain maps on the field. Meantime, the infantry can use your other skills—the ones you’ll get soon enough.”

And get them he did, with the rest of the 183rd, in an onslaught of rain that left bedding heavy and damp, uniforms drenched, and the camp awash in mud. Good preparation for the Front, he was told.

Rain had dripped steadily into a bucket by the major’s desk the day Angus was told he’d been promoted to lieutenant. “Your education is one thing,” the major had sighed. “Not orthodox exactly, with time in divinity school, but nothing in this war is orthodox. This is a citizen army, and we—”

Can’t be too choosey?

“What I mean to say is that combined with your age and maturity—and the fact that you’ve been a captain of, what was it, a cargo vessel? In the Maritimes?” He tapped his pen on the desk.

“Understand you were headed for cartography.” The major coughed, put the pen down, picked it up again. “Look, you seem to have your head on straight. You’re steady, well educated, and Sergeant Campbell thinks, as do I, that you’ll be well placed as a first lieutenant.”

Campbell? Campbell the bulldog had recommended
him
? That very morning he’d slapped up glossy photos on an easel, depicting in revolting detail just what a bayonet could and should do. Disemboweling men was quite another thing from ripping through straw targets. When he’d closed by saying the pictures were of
Allied
soldiers, he had men frothing for revenge. Head down, Angus had not joined in. Aww . . . squeamish? Campbell had mocked. Angus had known better than to reply. Squeamish was the least of it.

“Well?” the major asked impatiently. “First lieutenant. What have you to say to that?”

Angus had had little to say. Lieutenants were as expendable as the rank and file—more so. They dropped like flies, leading the charge. His education was hardly the preparation called for, but at thirty-four, age he did have. “Maturity” was a kind way of putting it. What did he think? He was astounded and afraid. How exactly did one grow into the hope of taking another man’s life?

All that was left to say was, “I’ll do my best to honor the regiment. Thank you, sir.”

“Yes, yes, of course,” the major said, turning back to his paperwork. But then looked Angus in the eye and said, “I’m sure you will, MacGrath.”

Standing outside on the rickety steps, Angus wasn’t so sure. He turned up the collar of his coat against the heavy mist. “Lieutenant MacGrath,” he repeated softly. That night, the rain’s steady drumming took on the beat of a cold rain on the
Lauralee’
s canvas. It called up the rush of her bow wave curling and falling back, the lull of it transformed to repetitive regret.

Three weeks after his promotion, on leave in London, the rain stopped and the skies suddenly cleared. All around him black umbrellas came down, were shaken and folded. People were smiling, and the puddles, shimmering on gray flagstone, took on the pale blue of the sky and caught the reds and blues and whites of the Union Jack in a child’s hand. Without effort, Angus reproduced the image in a quick sketch in a pub, right down to the fragmented reflection. He wanted to memorialize blue sky in case he never saw it again, he’d said to the amusement of his fellow officers. The drawing was in charcoal.

Now, as the men hopped about in the cold and toweled off with an army blanket, Angus let that memory of color and reflected sky engulf him. Allowed himself the luxury of going further back—to the tall white house on the hill above the bay, and the low-roofed sheds behind it, to the sharp smell of turpentine, the twist of sable brushes in the dented tin can, the paint-splattered floorboards. And on down the hill to the stony beach where seaweed draped over itself in the low tide and where Hettie Ellen, hair coming loose in the wind, leaned against a boulder, watching Simon Peter skipping rocks with ease, one after another, three, four, five skips. And beyond them to the
Lauralee
, nodding at her mooring, bright work gleaming in the last, long rays of sunlight.

Idealized images, every one. Angus knew it. He dealt in such images, after all. Could paint them, could sell them. And had. Idealized or not, they flooded through him in all their tender beauty—fragile strands of memory which even the faint crump of distant artillery could not touch—until it did, and the memories spun out and away, replaced by the unadorned image of his father, slumped at his desk, unable to comprehend how Angus could have turned against him.