The Cases of Susan Dare 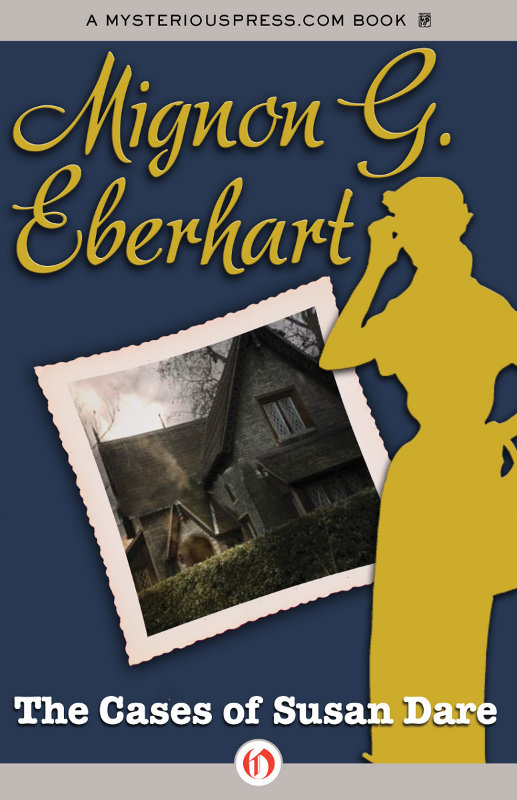 The Man Who Was Missing

S
USAN DARE WATCHED A
thin stream of blue smoke ascend without haste from the long throat of a tiger lily. Michela, then, had escaped also. She was not, however, on the long veranda, for the clear, broadening light of the rising moon revealed it wide and empty, and nothing moved against the silvered lawn which sloped gently toward the pine woods.

Susan listened a moment for the tap of Michela’s heels, did not hear it or any other intrusive sound, and then pushed aside the bowl of lilies on the low window seat, let the velvet curtains fall behind her, and seated herself in the little niche thus formed. It was restful and soothing to be thus shut away from the house with its subtly warring elements and to make herself part of the silent night beyond the open windows.

A pity, thought Susan, to leave. But after tonight she could not stay. After all, a guest, any guest, ought to have sense enough to leave when a situation develops in the family of her hostess. The thin trail of smoke from the lily caught Susan’s glance again and she wished Michela wouldn’t amuse herself by putting cigarette ends in flowers.

A faint drift of voices came from somewhere, and Susan shrank farther into herself and into the tranquil night. It had been an unpleasant dinner, and there would be still an hour or so before she could gracefully extract herself and escape again. Nice of Christabel to give her the guest house—the small green cottage across the terrace at the other side of the house, and through the hedge and up the winding green path. Christabel Frame was a perfect hostess, and Susan had had a week of utter rest and content.

But then Randy Frame, Christabel’s young brother, had returned.

And immediately Joe Bromfel and his wife Michela, guests also, had arrived, and with them something that had destroyed all content. The old house of the Frames, with its gracious pillars and long windows and generous dim spaces, was exactly the same—the lazy Southern air and the misty blue hills and the quiet pine woods and the boxed paths through the flowers—none of it had actually changed. But it was, all the same, a different place.

A voice beyond the green velvet curtains called impatiently: “Michela—Michela—”

It was Randy Frame. Susan did not move, and she was sure that the sweeping velvet curtains hid even her silver toes. He was probably at the door of the library, and she could see, without looking, his red hair and lithe young body and impatient, thin face. Impatient for Michela. Idiot, oh, idiot, thought Susan. Can’t you see what you are doing to Christabel?

His feet made quick sounds upon the parquet floor of the hall and were gone, and Susan herself made a sharply impatient movement. Because the Frame men had been red-haired, gallant, quick-tempered, reckless, and (added Susan to the saga) abysmally stupid and selfish, Randy had accepted the mold without question. A few words from the dinner conversation floated back into Susan’s memory. They’d been talking of fox hunting—a safe enough topic, one would have thought, in the Carolina hills. But talk had veered—through Michela, was it?—to a stableman who had been shot by one of the Frames and killed. It had happened a long time ago, had been all but forgotten, and had nothing at all to do with the present generation of Frames. But Christabel said hurriedly it had been an accident; dreadful. She had looked white. And Randy had laughed and said the Frames shot first and inquired afterwards and that there was always a revolver in the top buffet drawer.

“Here she is,” said a voice. The curtains were pulled suddenly backward, and Randy, a little flushed, stood there. His face fell as he discovered Susan’s fair, smooth hair and thin lace gown. “Oh,” he said. “I thought you were Michela.”

Others were trailing in from the hall, and a polite hour or so must be faced. Queer how suddenly and inexplicably things had become tight and strained and unpleasant!

Randy had turned away and vanished without more words, and Tryon Welles, strolling across the room with Christabel, was looking at Susan and smiling affably.

“Susan Dare,” he said. “Watching the moonlight, quietly planning murder.” He shook his head and turned to Christabel. “I simply don’t believe you, Christabel. If this young woman writes anything, which I doubt, it’s gentle little poems about roses and moonlight.”

Christabel smiled faintly and sat down. Mars, his black face shining, was bringing in the coffee tray. In the doorway Joe Bromfel, dark and bulky and hot-looking in his dinner coat, lingered a moment to glance along the hall and then came into the room.

“If Susan writes poems,” said Christabel lightly, “it is her secret. You are quite wrong, Tryon. She writes——” Christabel’s silver voice hesitated. Her slender hands were searching, hovering rather blindly over the tray, the large amethyst on one white finger full of trembling purple lights. It was a barely perceptible second before she took a fragile old cup and began to pour from the tall silver coffee pot. “She writes murders,” said Christabel steadily. “Lovely, grisly ones, with sensible solutions. Sugar, Tryon? I’ve forgotten.”

“One. But isn’t that for Miss Susan?”

Tryon Welles was still smiling. He, the latest arrival, was a neat gray man with tight eyes, pink cheeks, and an affable manner. The only obvious thing about him was a rather finical regard for color, for he wore gray tweed with exactly the right shades of green—green tie, green shirt, a cautious green stripe in gray socks. He had reached the house on the heels of his telephoned message from town, saying he had to talk business with Christabel, and he had not had time to dress before dinner.

“Coffee, Joe?” asked Christabel. She was very deft with the delicate china. Very deft and very graceful, and Susan could not imagine how she knew that Christabel’s hands were shaking.

Joe Bromfel stirred, turned his heavy dark face toward the hall again, saw no one, and took coffee from Christabel’s lovely hand. Christabel avoided looking directly into his face, as, Susan had noticed, she frequently did.

His question hung in the air. Christabel did not reply, and Joe Bromfel did not appear to hear it. Susan said:

“They must have. After all, people don’t murder just—well, just to murder.”

“Just for the fun of it, you mean?” said Tryon Welles, tasting his coffee. “No, I suppose not. Well, at any rate,” he went on, “it’s nice to know your interest in murder is not a practical one.”

He probably thought he was making light and pleasant conversation, reflected Susan. Strange that he did not know that every time he said the word “murder” it fell like a heavy stone in that silent room. She was about to wrench the conversation to another channel when Michela and Randy entered from the hall; Randy was laughing and Michela smiling.

At the sound of Randy’s laugh, Joe Bromfel twisted bulkily around to watch their approach, and, except for Randy’s laugh, it was entirely silent in the long book-lined room. Susan watched too. Randy was holding Michela’s hand, swinging it as if to suggest a kind of frank camaraderie. Probably, thought Susan, he’s been kissing her out in the darkness of the garden. Holding her very tight.

Michela’s eyelids were white and heavy over unexpectedly shallow dark eyes. Her straight black hair was parted in the middle and pulled severely backward to a knot on her rather fat white neck. Her mouth was deeply crimson. She had been born, Susan knew, in rural New England, christened Michela by a romantic mother, and had striven to live up to the name ever since. Or down, thought Susan tersely, and wished she could take young Randy by his large and outstanding ears and shake him.

Michela had turned toward a chair, and her bare back presented itself to Susan, and she saw the thin red line with an angle that a man’s cuff, pressing into the creamy flesh, had made. It was unmistakable. Joe Bromfel had seen it, too. He couldn’t have helped seeing it. Susan looked into her coffee cup and wished fervently that Joe Bromfel hadn’t seen the imprint of Randy’s cuff, and then wondered why she wished it so fervently.

“Coffee, Michela?” said Christabel, and something in her voice was more, all at once, than Susan could endure. She rose and said rather breathlessly:

“Christabel darling, do you mind—I have some writing to do—”

“Of course.” Christabel hesitated. “But wait—I’ll go along with you to the cottage.”

Christabel turned to Tryon Welles and neatly forestalled a motion on his part to accompany her and Susan.

“I won’t be long, Tryon,” she said definitely. “When I come back—we’ll talk.”

A clear little picture etched itself on Susan’s mind: the long, lovely room, the mellow little areas of light under lamps here and there, one falling directly upon the chair she had just left, the pools of shadows surrounding them; Michela’s yellow satin, and Randy’s red head and slim black shoulders; Joe, a heavy, silent figure, watching them broodingly; Tryon Welles, neat and gray and affable, and Christabel with her gleaming red head held high on her slender neck, walking lightly and gracefully amid soft mauve chiffons. Halfway across the room she paused to accept a cigarette from Tryon and to bend to the small flare of a lighter he held for her, and the amethyst on her finger caught the flickering light of it and shone.

Then Susan and Christabel had crossed the empty flagstone veranda and turned toward the terrace.

Their slippered feet made no sound upon the velvet grass. Above the lily pool the flower fragrances were sweet and heavy on the night air.

“Did you hear the bullfrog last night?” asked Christabel. “He seems to have taken up a permanent residence in the pool. I don’t know what to do about him. Randy says he’ll shoot him, but I don’t want that. He
is
a nuisance of course, bellowing away half the night. But after all—even bullfrogs—have a right to live.”

“Christabel,” said Susan, trying not to be abrupt, “I must go soon. I have—work to do—”

Christabel stopped and turned to face her. They were at the gap in the laurel hedge where a path began and wound upward to the cottage.

“Don’t make excuses, Susan honey,” she said gently. “Is it the Bromfels?”

A sound checked Susan’s reply—an unexpectedly eerie sound that was like a wail. It rose and swelled amid the moonlit hills, and Susan gasped and Christabel said quickly, though with a catch in her voice: “It’s only the dogs howling at the moon.”

“They are not,” Susan said, “exactly cheerful. It emphasizes—” She checked herself abruptly on the verge of saying that it emphasized their isolation.

Christabel had turned in at the path. It was darker there, and her cigarette made a tiny red glow. “If Michela drops another cigarette into a flower I’ll kill her,” said Christabel quietly.

White Lies by Jeremy Bates
The Envoy by Wilson, Edward
Virgin Prisoner: Bred to the Beast (Werewolf Breeding Erotica) (Bred to the Beast: The Virgin Trilogy) by Tucker, Fannie
The Big Bam: The Life and Times of Babe Ruth by Montville, Leigh
The Minstrel's Melody by Eleanora E. Tate
Gifted by Beth Evangelista
The Gamal by Ciarán Collins
Reach for Tomorrow by Lurlene McDaniel
Up to No Good by Carl Weber
The Second Book of the Dun Cow: Lamentations by Walter Wangerin Jr.
Our partner