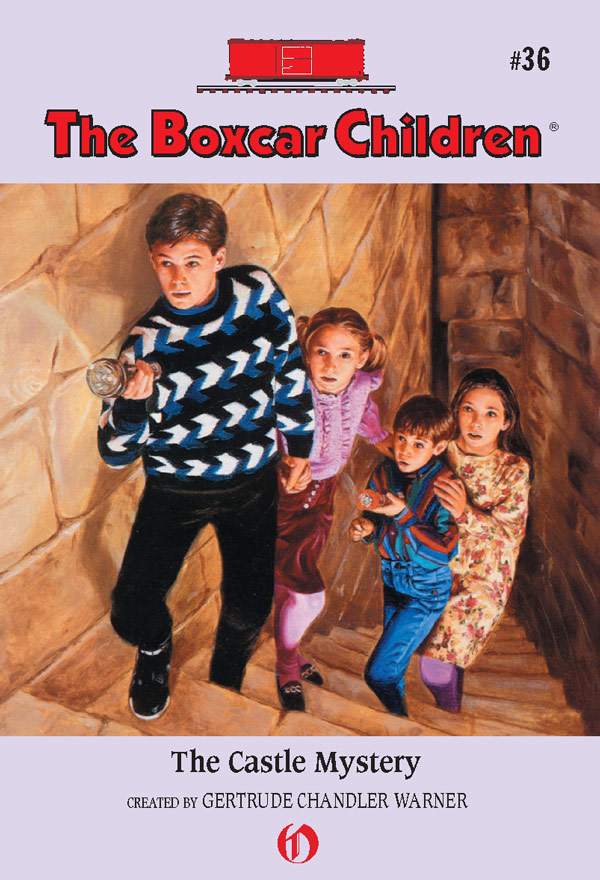 A
big black car drove through the dark green woods. James Alden turned on the headlights.

“Hmm, I can't see much better,” Mr. Alden told Jessie and Henry, his two older grandchildren, who were sitting up front with him. “Guess I'll have to go slower.”

Wet black branches scraped against the side of the car.

In the backseat, ten-year-old Violet shivered. “I hope it's not too much longer, is it, Grandfather?” she asked.

“No, we're almost there,” Grandfather said.

Whenever the road dipped down, a thick fog settled around them. Finally, the car reached a clear stretch of road.

“Look across the lake,” Mr. Alden said. “It's awfully misty, but I bet you can spot Drummond Castle.”

Six-year-old Benny pressed his nose against the window. “I see something big and gray. I can't tell if it's a rock or a castle.”

Fourteen-year-old Henry turned to Benny. “It's a rock
and
a
castle. I read in Grandfather's magazine on antiques that Drummond Castle is a smaller copy of a real castle in Germany. Only this one is built on a cliff with a cave underneath!”

“Sounds like a good place for a mystery!” Benny said.

The last Drummond, William Drummond III, had died, and Grandfather's friend, Carrie Bell, had been hired by the Drummond Foundation to turn his magnificent home into a museum. Knowing how much the Aldens would enjoy visiting a castle, Carrie had invited them to help out. 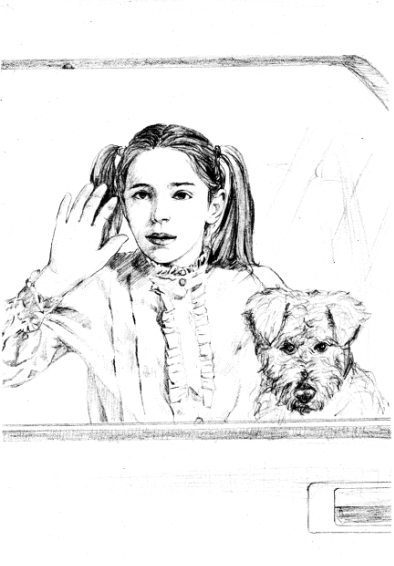 For some time now, the children had been living with Mr. Alden. He had found his grandchildren staying in a boxcar out in the woods. Now the boxcar was just a cheery playhouse in Mr. Alden's backyard. Henry, Jessie, Violet, and Benny lived in a real house with a proper kitchen and real bedrooms.

The children tried to make out the castle in the distance. They liked staying in new places, especially if they were old places!

For a second, Mr. Alden took his eyes off the road to look at the castle. Just as he was turning back, Henry yelled: “Watch out, Grandfather. There's a car coming! Pull over! Pull over!”

Two bright headlights cut through the fog and raced straight toward the Aldens' car.

“There's no room for it to get by!” Jessie cried out.

Mr. Alden leaned on his horn. He flashed his headlights on and off. The car kept on coming. Finally Grandfather pulled the car into a clearing. The red Jeep raced by as if it were on a two-lane highway, not a narrow, twisty road. The woman at the wheel didn't seem to have any idea that she had almost caused an accident.

Benny and Violet sank back into their seats. They were a little scared, a little tired, and very hungry. It had been a long day.

Their dog, Watch, who was sitting in the backseat, too, let out a sad, hungry cry. Poor Watch had been so good on the long drive. Still, this delay was too much even for a well-behaved dog.

“There, there,” Violet crooned. She reached into a bag and gave Watch a dog biscuit.

The treat helped, but the children could see that Watch needed more than a biscuit. He needed a short walk to stretch his legs.

Mr. Alden turned off the engine. “That was a close call. Let's all get a breath of air.”

The children opened the car doors. They were glad to sniff the fresh piney breezes. So was Watch, who pulled Violet to this tree and that.

Grandfather handed Jessie his binoculars. “See if you can get these focused for Benny.” He pointed across the lake. “Drummond Castle is just past that island. I'm sure Benny would like a better look at the place we'll be staying in, wouldn't you now, Ben?”

“You know I would,” Benny answered with a big smile.

Mr. Alden always knew what his youngest grandson liked â castles and caves, mysteries and adventures. When Jessie showed her little brother where to point the binoculars, Benny had a feeling a big adventure was coming up. Through the glasses he could see a tall, gray stone castle with two towers that faced each other.

“Look, look, Henry,” Benny handed his older brother the binoculars. “There's even a light shining in one of the towers! Maybe it's a ghost.”

Mr. Alden patted Benny's head. “I hate to disappoint you, Benny,” he said, “but it's more likely to be Caroline getting your sleeping quarters ready. She said that one of the towers was just the place for four lively children.”

“Well, let's get going!” Benny cried. He opened the car door, then whistled for Watch to hop in.

The Aldens didn't mind the rest of the ride around the lake now that the castle was in sight.

“It's like a castle in the air,” Jessie said when she looked down at the steep drop off the road.

“Don't look down, whatever you do!” Henry told Benny with a laugh.

Benny, of course, did just that. “Oooo. We're so high up!” he said happily. “Come on, Violet. Open your eyes. It's steep, but it's really pretty. Take a look.”

“We're there!” Henry yelled a few minutes later. “You can look now, Violet!”

Drummond Castle was not at all what she'd expected. Black branches of overgrown vines twisted through the arches of a stone porch. In some places the branches climbed so high, they seemed to strangle the castle. Many of the famous stained glass windows the children had seen in old pictures were boarded up to protect them from damage. The two castle towers disappeared into the fog. The whole place was covered in gloom.

Jessie saw Violet's disappointment. She took her younger sister's hand. “Come on. Let's find Carrie Bell. Grandfather told me she couldn't wait for us to help her fix up this place. It will look much prettier when the fog lifts.”

“I guess so,” Violet said in a quiet voice. “I do so want to see what a castle looks like, even though it's not a real one. I just wish it looked more like it belonged in a fairy tale instead of a â¦ .”

A Shadow at the Door

T
he Aldens unpacked the trunk of the car. Violet kept her eyes on her belongings, not the castle. If only the fog would go away.

But now that they were closer, the castle seemed a little less scary.

Grandfather put his arm around Violet. “You know this castle was built as a home when the first Drummonds came back from their honeymoon in Germany. The first William Drummond built it for his bride â not to keep out armies or dragons.”

This made Violet feel a little better. “The stained glass windows make pretty patterns,” she noticed.

Jessie and Violet stared at a particularly beautiful round window right over the entrance. “That one is the prettiest,” Jessie said. “There's a face painted in the center. See.”

The Aldens looked up to where Violet was pointing. All they saw was the face of a young knight painted on the central piece of the stained glass.

A beautiful carved stone porch encircled the ground level of the castle. The Aldens went up the steps to ring the bell.

After the third bang, a huge oak door creaked opened. A long shadow stood there.

“Who're you?” the shadow barked.

The Aldens took a closer look. The shadow was actually a man about Mr. Alden's age but tall, thin, and gruff. The light behind him in the huge hallway had made him seem like a shadow.

Before the Aldens could answer, Carrie Bell came to greet her friends. “Why James, you made it at last!” the smiling older woman said. “I'm sorry you had such a poor day to travel. Our old lake road can be a real challenge in the fog.”

“Well, it seems to be clearing now.” Mr. Alden turned back to the man. “How do you do, sir? I am James Alden, and these are my grandchildren, Henry, Jessie, Violet, and Benny.”

These words seemed to frighten the man. Without saying a thing, he disappeared down a dark hall.

“Oh, Mr. Tooner, come back and meet the Aldens,” Carrie called out.

But the man didn't even slow down.

Carrie lowered her voice. “Don't mind poor Mr. Tooner. He's been the caretaker here for many years, just like his father before him. He's very worried about Drummond Castle becoming a museum after it's restored. He does a wonderful job caring for the castle, but he needs help. That's what we're all here for.” Carrie turned to Benny. “I heard you make the lion on the door knocker growl, Benny! Now watch this.”

Carried gathered the Aldens' umbrellas and stuck them inside the mouth of a ferocious-looking lion statue. “How do you like that?” Carrie asked.

Benny laughed at how silly the lion looked with a mouthful of umbrellas. “He doesn't look nearly so mean now!”

Even Violet had to laugh. She just wished that the big humps of furniture covered with white dust sheets looked as silly as that lion. She half expected some of them to start moving around the room!

Carrie took Violet by the hand. “All the furniture downstairs has been covered up since William Drummond III died last year. With all of you here to help out, we can make this big old place look homier very soon. Now come upstairs to your rooms.”

The Aldens followed Carrie up a winding staircase at the back of the castle. “I know this musty old place looks a bit gloomy today, but you children have a wonderful experience ahead of you. There are so many imaginative objects here like that silly door knocker and the umbrella stand. This castle is full of surprises.”

Carrie led the Aldens down a hall off the first landing. She pushed open a heavy wooden door. “This will be your room, James.”

Inside the huge room was a canopy bed and a fireplace, tall enough to stand in. Over in the corner stood a suit of armor.

Carrie lifted up Benny. “Raise the front of this armor headpiece.” she said.

Benny moved the metal flap, and gasped. Then he laughed. “Somebody put a picture of a boy's face under the helmet!” he told everyone.

Sure enough, a faded drawing of a smiling boy about Benny's age peeked out from under the armor headpiece. 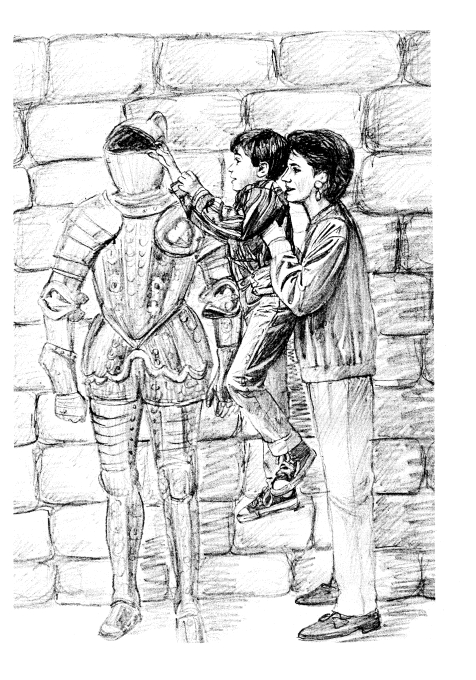 The Iron King by Julie Kagawa
The Reaper: No Mercy by Sean Liebling
Bluebottle by James Sallis
Is Everyone Hanging Out Without Me? (And Other Concerns) by Mindy Kaling
Whizz by Sam Crescent
Hot Shot by Matt Christopher
Death Lies Beneath by Pauline Rowson
Lying Eyes by Toni Noel
Tomb of the Lost by Noyce, Julian
The Miseducation of Cameron Post by Emily M. Danforth
Our partner