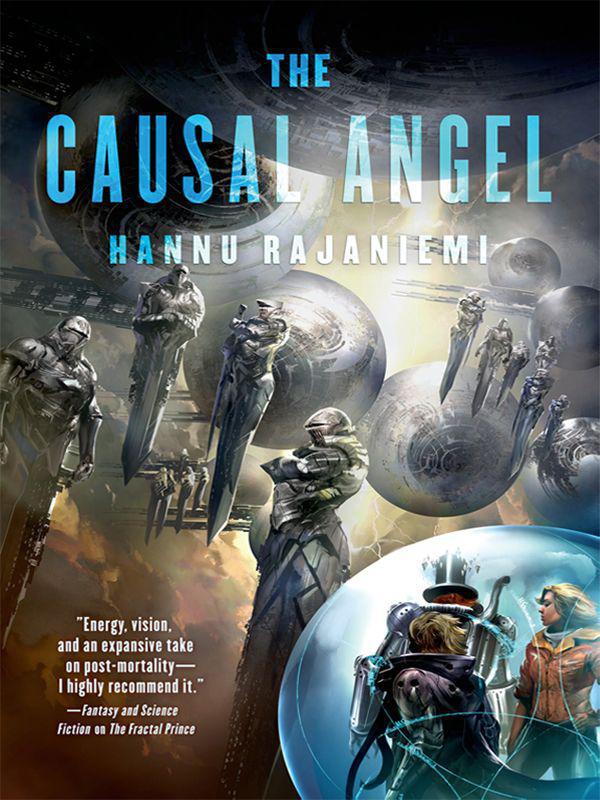 Copyright infringement is against the law. If you believe the copy of this e-book you are reading infringes on the author’s copyright, please notify the publisher at:
http://us.macmillanusa.com/piracy
.

Alone on the timeless beach, Joséphine Pellegrini finds herself disappointed by the end of the world.

The sun is almost down, an orange flare just beyond the edge of the calm expanse of the sea. The globe of Earth hangs in the sky. There are dark tendrils chasing each other in the white and blue, spreading like spilled ink. Matjek Chen’s Dragons, turning matter and energy and information into themselves. Soon, they will burrow into the crust of the dying world to swallow the remnants of the subterranean bacterial biosphere. When that last bastion of life is gone, they will devour each other, and only a dead globe of dust and rock will remain.

As Ragnaröks go, she has seen better. The last one was the glorious birth of something new. This is merely the final withering of an ancient placenta, long since overdue.

Still, she watches, for Matjek’s sake: it was the last thing he made before the All-Defector took him. Beautiful, brilliant, dangerous Matjek. It’s the kind of grand gesture she loved him for, a bit childish but larger than worlds. She allows herself to miss him for a moment, his fierce gaze, his calm smile.

She even forgives him for trapping her inside this mindshell. It is
old
, like the cocoon of flesh she hatched from, centuries ago. The fine white sand is cold beneath her veiny bare feet. When she hugs herself against the chill, the goose-pimpled flesh of her arms sags in her grip. A sharp pain scuttles up and down in her lower back like a crab.
Age is the cruellest of prisons.

She
would have been merciful in victory. She only wanted to show Matjek how to rule the Universe. And she would have spared him, in the end.

But her tools failed her. Traitorous, ungrateful Mieli, rebelling at the crucial moment, throwing away the glorious destiny Joséphine had planned for her.

And then there is her Jean.

The thief betrayed her. The Kaminari jewel, the key to Planck locks, the one Joséphine brought him back from hell to steal – it was a fake he made decades ago, to mock her. He will pay for that, dearly. Being eaten by wildcode inside Mieli’s ship is not nearly punishment enough.

Tools always break. She should have remembered that.

And now she is here, imprisoned by the All-Defector. It left her here after it saw the message inside the jewel.

I’m going to take everything, in the end
, it said.
But I still need you.

As if
she
was a tool to be used and discarded, when she gave that abomination everything. It was Joséphine who sent Mieli to retrieve the All-Defector from the Dilemma Prison, made sure it was hidden in the thief’s mind, ready to be unleashed if Jean was caught. A purpose it fulfilled admirably, until it ate Matjek and began to have delusions of grandeur.

It needs to be educated.

She takes a deep breath of the sea-scented air to fan the spark of incandescent rage in her chest.

She will not be caged by a twisted thing bred wrong in one of Sasha’s gogol hothouses. She will break this little prison, this tawdry childhood memory of Matjek’s, like he broke the Earth.

The All-Defector was a fool to leave her here alone.

Slowly, she sits down, ignoring the complaints of her bones. She digs her hands deep into the sand. It retains an echo of the imaginary day’s heat. She lets it run between her fingers. The grains catch the last rays of the sun. She looks closer, tries to see the shapes of the sand particles, all their jagged detail.

No vir, no sandbox, is ever perfect: she learned as much from Jean. And this one is a dream-vir, facsimile of an ancient jannah, not something made to cage a Founder. There will be demiurge gogols here, world-makers that fill the gaps when she looks too closely.

Just so.
Under her gaze, the fabric of the vir wavers for an instant. She pushes her Founder code into the crack:
the little red thing and the bed and the vow.
The veil of reality opens just a bit, lets her feel the firmament, the hard edges beneath the softness of the sand. It is locked with Matjek’s code, of course. But she can hear whispers.

Who? Founder! Xiao! Fear!
they say. The demiurges shudder and flee at her touch, but she speaks to them, coaxes them.
Wait. Stay. Play
!

She knows this copyclan. They are industrious and child-like, and very, very lonely.

They listen to her, suddenly curious. She smiles. She may be caged in a decrepit mindshell, she does not have her Prime aspect, but she is still Joséphine Pellegrini, ancient beyond reckoning, and she knows how gogols are tamed.
She
may be trapped here, but if she can command the demiurges, perhaps she can make a partial, a lesser shadow of herself that can slip through the cracks.

Paint the sky for me
, she tells them.
Paint far and wide. Paint the System.

Joyfully, they rush to obey. This is what they were told to do by their master, to shape the vir as if it was a dream, fill it with the stories other gogols gather from the distant outside world, and with stories told within.

The sky comes alive with fire and war.

Joséphine watches the System boil with motion like a nest of disturbed ants.

The demiurges show it to her as a swirling galaxy where each star is a ship. The Highway, the gravitational artery of the System, is flooding with refugees – the lesser civilisations of the Belt that have so long huddled close to the brilliance of the Sobornost, hoping to catch a spark. They flee, thinking the great reaping of their mind-wheat has finally come. Joséphine sneers: they should be so lucky as to serve the Great Common Task.

It is shadows on a cave wall compared to seeing through the billion eyes of her Prime aspect, but she is sure to glow with pleasure at the demiurges.
Well done. Now show me my sisters.

The sky expands, shows the Sun girdled with Sobornost sunlifting machines and smartmatter factories, unfolds into a high-dimensional map of the raions and oblasts and
guberniyas
, and the many-faceted virs within, countless gogols as signals in the neurons of the vast brain of the Sobornost, a cosmic web of thought. A brain at war with itself.

Her sisters are fighting the vasilevs and the hsien-kus. It is a confrontation that is long overdue, after baseline centuries and subjective aeons of scheming and backstabbing. She knows the pellegrini copyclan will lose. The Founders’ warminds and weapons are equal, and only numbers matter.

Still, it is not too late. A scheme is already unfolding in her mind. Something to unite all the Founders, that’s what she wanted in the first place. The All-Defector can still be her tool, an enemy that will force even the vasilevs and the hsien-kus to join her. Sasha will follow her, and the rest of them will fall in line—

Joséphine frowns. There is something wrong in the weave of the battle. The reflection of her myriad selves in the sky is skewed, like an image in a funhouse mirror.

Suddenly, she sees the pattern emerge, sees the hand of the All-Defector at work. She gazes into the face of an apocalypse, greater than any Matjek ever dreamt, woven out of orbits and battles and thoughtwisps.

She watches the war for a long time. It is like staring into the barrel of a gun, seeing the cylinder turning, inevitable and mechanical, the hammer coming down before the thunder and the white and the black.

It is then that she understands what the All-Defector truly is.

Finally, she closes her eyes, lies down on the cold sand, arms at her sides, in corpse pose. She listens to the white sound of the sea.

It wanted me to see that,
she thinks.
It knew what I was going to do. That’s why it left me here.

For the first time in centuries, a void grows inside her, a temptation to end things at last.

Are you sad?
the demiurges ask.
We will show you more! We are sky-painters, world-makers, singers, shapers!

She squeezes her hands into fists. Her knuckles ache. She sits up and looks down at the darkening beach. Her footprints follow the curve of the sea in an orderly row, one after another.

It is my turn to show you something,
she says.
If you help me, we can make you a friend.

We listen! We make! We shape!
says the chorus of the demiurges.

She starts walking, stepping into her own sandy impressions with slow, tired strides. Cold waves lap at her feet.

In the sky, the true end of the world begins. Joséphine ignores it. She is busy making a last hope, out of memories and sand.

THE THIEF AND THE LAST BATTLE

We are barely past the orbit of Mars when Matjek figures out the truth about Narnia and helps me find Mieli’s trail.

‘That can’t be the end!’ he says, holding up a book. It is a big, battered purple volume, with a circular window-like cover image that shows clashing armies. He has to lift it with both of his four-year-old hands. He struggles with its weight and finally slams it down onto the table in front of me.

The Last Battle
, by C.S. Lewis, I note with a sigh.
That means difficult questions.

For the past few subjective days, the tiny main vir of our ship, the
Wardrobe
, has been a calm place. I created it based on a dream Matjek told me about. It is an incense-scented labyrinth of high bookshelves full of haphazardly stacked books of all sizes and colours. Matjek and I usually sit at a rough wooden table in the small café area in the front, brightly lit by diffuse sunlight through the display windows.

Outside – painted on the imaginary glass for us by the vir – is the turbulent flow of the Highway, thousands of lightwisps, rockships, calmships, beamriders and other craft of every kind, reflected from the
Wardrobe
’s solar sails in a myriad glinting fragments. And somewhere in the back, in the shadows, the blue and silver books that hold the fractally compressed minds of the people and jinni and gods of Sirr whisper to each other with papery voices.

Until now, Matjek has been reading his books quietly, leaning his chin on his fists. Which has suited me fine: I have been busy looking for Mieli in the death cries of Earth.

‘They can’t just all die! It’s not fair!’ Matjek says.

I look at him and make my sole Highway-zoku jewel – an emerald crystal disc with a tracery of milky veins inside, a gift from a friendly cetamorph – spin between my fingers.

The boy answers with a disapproving stare. His eyes are earnest and intense, a piercing blue gaze that is at odds with his soft round face. It brings back uncomfortable memories from the time his older self caught me and took my brain apart, neuron by neuron.

See How She Falls by MIchelle Graves
A Sheriff in Tennessee by Lori Handeland
The Drop by Howard Linskey
All That He Wants by Olivia Thorne
Fosters: Blackhawk by L. Ann Marie
The Trenches by Jim Eldridge
A Long Walk Home: One Woman's Story of Kidnap, Hostage, Loss - and Survival by Tebbutt, Judith
Starlight Dunes by Vickie McKeehan
The Death Run (A Short Story) by Ruttan, Sandra
Dance With A Gunfighter by JoMarie Lodge
Our partner