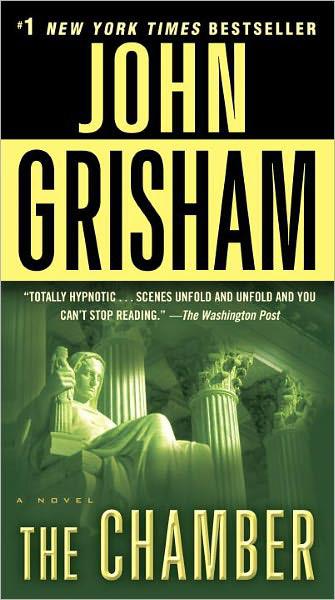 THE CHAMBER
A Dell Book

No part of this book may be reproduced or transmitted in any form or by any means, electronic or mechanical, including photocopying, recording, or by any information storage and retrieval system, without the written permission of the publisher, except where permitted by law. For information address: Doubleday, New York, New York.

T
he decision to bomb the office of the radical Jew lawyer was reached with relative ease. Only three people were involved in the process. The first was the man with the money. The second was a local operative who knew the territory. And the third was a young patriot and zealot with a talent for explosives and an astonishing knack for disappearing without a trail. After the bombing, he fled the country and hid in Northern Ireland for six years.

The lawyer’s name was Marvin Kramer, a fourth-generation Mississippi Jew whose family had prospered as merchants in the Delta. He lived in an antebellum home in Greenville, a river town with a small but strong Jewish community, a pleasant place with a history of little racial discord. He practiced law because commerce bored him. Like most Jews of German descent, his family had assimilated nicely into the culture of the Deep South, and viewed themselves as nothing but typical Southerners who happened to have a different religion. Anti-Semitism rarely surfaced. For the most part, they blended with the rest of established society and went about their business.

Marvin was different. His father sent him up North to Brandeis in the late fifties. He spent four years there, then three years in law school at Columbia, and when he returned to Greenville in 1964 the civil rights movement had center stage in Mississippi. Marvin got in the thick of it. Less than a month after opening his little law office, he was arrested along with two of his Brandeis
classmates for attempting to register black voters. His father was furious. His family was embarrassed, but Marvin couldn’t have cared less. He received his first death threat at the age of twenty-five, and started carrying a gun. He bought a pistol for his wife, a Memphis girl, and instructed their black maid to keep one in her purse. The Kramers had twin two-year-old sons.

The first civil rights lawsuit filed in 1965 by the law offices of Marvin B. Kramer and Associates (there were no associates yet) alleged a multitude of discriminatory voting practices by local officials. It made headlines around the state, and Marvin got his picture in the papers. He also got his name on a Klan list of Jews to harass. Here was a radical Jew lawyer with a beard and a bleeding heart, educated by Jews up North and now marching with and representing Negroes in the Mississippi Delta. It would not be tolerated.

Later, there were rumors of Lawyer Kramer using his own money to post bail for Freedom Riders and civil rights workers. He filed lawsuits attacking whites-only facilities. He paid for the reconstruction of a black church bombed by the Klan. He was actually seen welcoming Negroes into his home. He made speeches before Jewish groups up North and urged them to get involved in the struggle. He wrote sweeping letters to newspapers, few of which were printed. Lawyer Kramer was marching bravely toward his doom.

The presence of a nighttime guard patrolling benignly around the flower beds prevented an attack upon the Kramer home. Marvin had been paying the guard for two years. He was a former cop and he was heavily armed, and the Kramers let it be known to all of Greenville that they were protected by an expert marksman. Of course, the Klan knew about the guard, and the Klan knew to leave him alone. Thus, the decision
was made to bomb Marvin Kramer’s office, and not his home.

The actual planning of the operation took very little time, and this was principally because so few people were involved in it. The man with the money, a flamboyant redneck prophet named Jeremiah Dogan, was at the time the Imperial Wizard for the Klan in Mississippi. His predecessor had been loaded off to prison, and Jerry Dogan was having a wonderful time orchestrating the bombings. He was not stupid. In fact, the FBI later admitted Dogan was quite effective as a terrorist because he delegated the dirty work to small, autonomous groups of hit men who worked completely independent of one another. The FBI had become expert at infiltrating the Klan with informants, and Dogan trusted no one but family and a handful of accomplices. He owned the largest used car lot in Meridian, Mississippi, and had made plenty of money on all sorts of shady deals. He sometimes preached in rural churches.

The second member of the team was a Klansman by the name of Sam Cayhall from Clanton, Mississippi, in Ford County, three hours north of Meridian and an hour south of Memphis. Cayhall was known to the FBI, but his connection to Dogan was not. The FBI considered him to be harmless because he lived in an area of the state with almost no Klan activity. A few crosses had been burned in Ford County recently, but no bombings, no killings. The FBI knew that Cayhall’s father had been a Klansman, but on the whole the family appeared to be rather passive. Dogan’s recruitment of Sam Cayhall was a brilliant move.

The bombing of Kramer’s office began with a phone call on the night of April 17, 1967. Suspecting, with good reason, that his phones were tapped, Jeremiah Dogan waited until midnight and drove to a pay phone
at a gas station south of Meridian. He also suspected he was being followed by the FBI, and he was correct. They watched him, but they had no idea where the call was going.

Sam Cayhall listened quietly on the other end, asked a question or two, then hung up. He returned to his bed, and told his wife nothing. She knew better than to ask. The next morning he left the house early and drove into the town of Clanton. He ate his daily breakfast at The Coffee Shop, then placed a call on a pay phone inside the Ford County Courthouse.

Two days later, on April 20, Cayhall left Clanton at dusk and drove two hours to Cleveland, Mississippi, a Delta college town an hour from Greenville. He waited for forty minutes in the parking lot of a busy shopping center, but saw no sign of a green Pontiac. He ate fried chicken in a cheap diner, then drove to Greenville to scout the law offices of Marvin B. Kramer and Associates. Cayhall had spent a day in Greenville two weeks earlier, and knew the city fairly well. He found Kramer’s office, then drove by his stately home, then found the synagogue again. Dogan said the synagogue might be next, but first they needed to hit the Jew lawyer. By eleven, Cayhall was back in Cleveland, and the green Pontiac was parked not at the shopping center but at a truck stop on Highway 61, a secondary site. He found the ignition key under the driver’s floor mat, and took the car for a drive through the rich farm fields of the Delta. He turned onto a farm road and opened the trunk. In a cardboard box covered with newspapers, he found fifteen sticks of dynamite, three blasting caps, and a fuse. He drove into town and waited in an all-night café.

At precisely 2 a.m., the third member of the team walked into the crowded truck stop and sat across from Sam Cayhall. His name was Rollie Wedge, a
young man of no more than twenty-two, but a trusted veteran of the civil rights war. He said he was from Louisiana, now lived somewhere in the mountains where no one could find him, and though he never boasted, he had told Sam Cayhall several times that he fully expected to be killed in the struggle for white supremacy. His father was a Klansman and a demolition contractor, and from him Rollie had learned how to use explosives.

Sam knew little about Rollie Wedge, and didn’t believe much of what he said. He never asked Dogan where he found the kid.

They sipped coffee and made small talk for half an hour. Cayhall’s cup shook occasionally from the jitters, but Rollie’s was calm and steady. His eyes never blinked. They had done this together several times now, and Cayhall marveled at the coolness of one so young. He had reported to Jeremiah Dogan that the kid never got excited, not even when they neared their targets and he handled the dynamite.

Wedge’s car was a rental from the Memphis airport. He retrieved a small bag from the backseat, locked the car, and left it at the truck stop. The green Pontiac with Cayhall behind the wheel left Cleveland and headed south on Highway 61. It was almost 3 a.m., and there was no traffic. A few miles south of the village of Shaw, Cayhall turned onto a dark, gravel road and stopped. Rollie instructed him to stay in the car while he inspected the explosives. Sam did as he was told. Rollie took his bag with him to the trunk where he inventoried the dynamite, the blasting caps, and the fuse. He left his bag in the trunk, closed it, and told Sam to head to Greenville.

They drove by Kramer’s office for the first time around 4 a.m. The street was deserted, and dark, and
Rollie said something to the effect that this would be their easiest job yet.

“Too bad we can’t bomb his house,” Rollie said softly as they drove by the Kramer home.

“Yeah, I know. But the guard would be easy.”