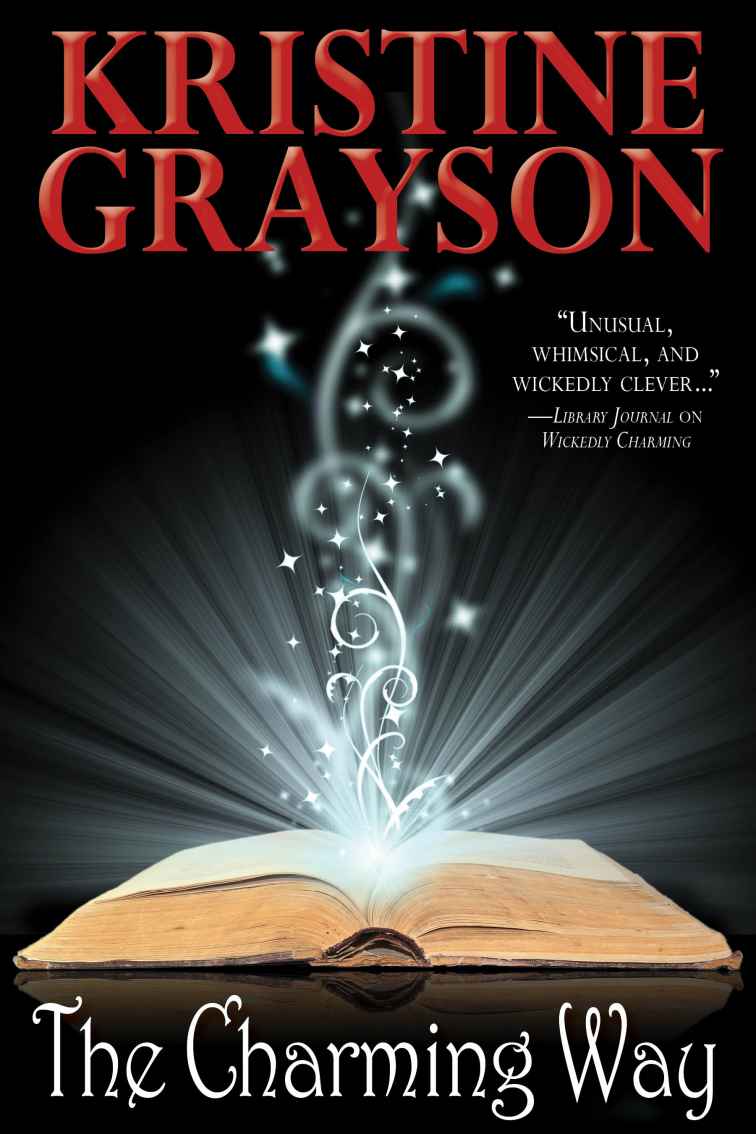 This book is licensed for your personal
enjoyment only. All rights reserved.

This is a work of fiction. All characters and
events portrayed in this book are fictional,
and any resemblance to real people or incidents is purely coincidental.

This book, or parts thereof, may not be
reproduced in any form without permission.

Every time someone wrote something down,
they got it wrong. She’d learned that in her exceptionally long life.

And now she was paying for it.

She stood with her hands on her hips
(which hadn’t expanded [much] since she was a beautiful young girl, who caught
the eye of every man) and looked at the pavilion, with the banner strung across
its multitude of doors.

The
Largest Book Fair in the World!
the banner proclaimed in bright red letters. The largest book fair with the
largest number of publishers, writers, readers and moguls—movie and
gaming and every other type the entertainment industry had come up with.

It probably should be called
Mogul Fair
(Mogul Unfair?). But they
weren’t pitching Moguls (although someone probably should; it was her
experience that anyone with a shred of power [present company included] should
be pitched across a room [or down a staircase] every now and then); they were
pitching books.

This season’s books, next season’s books,
books for every race, creed, and constituency, large books, small books and the
all-important evergreen books which were not, as she once believed, books about
evergreens, but books that never went out of style, like
Little Women
or anything by Jane Austen or, dammit, that villain
Hans Christian Andersen.

Not that he started it all. He didn’t. It
was those Grimm brothers, two better named individuals she had never met.

It didn’t matter that Mellie had set them
straight. By then, their “tales” were already on the market, poisoning the
well, so to speak. (Or the apple. Those boys did love their poisons. It would
have been so much better for all concerned if they had turned their attention
to crime fiction. They could have invented the entire category. But noooo. They
had to focus on what they called “fairies” as misnamed as their little
“tales.”) She made herself breathe. Even alone with her own thoughts, she couldn’t
help going on a bit of a rant about those creepy little men.

She made herself turn away from the
pavilion and walk to the back of her minivan. With the push of a button, the
hatchback unlocked (now
that
was
magic) and she pulled the thing open.

Fifty signs and placards leaned
haphazardly against each other. Last time, she’d only needed twenty. She hoped
she would use all fifty this time.

She glanced at her watch. One hour until
the Book Unfair opened.

Half an hour until her group showed up.

Mellie turned her attention to the
pavilion again. Impossible to tell where she’d get the most media exposure. Certainly
not at those doors, with the handicapped ramp blocking access along one side.

Once someone else arrived to help her
hand out the placards, she could leave for a few minutes and reconnoiter.

She wanted the maximum amount of airtime
for the minimum amount of exposure. She’d learned long ago that if you gave the
media too much time in the beginning, they’d distort everything you said.

Better to parcel out information bit by
bit.

The Book Unfair was only her first salvo.

But, she knew, it would be the most
important.

He parked his silver Mercedes at the far
end of the massive parking lot. He did it not so that he wouldn’t be
recognized—he wouldn’t anyway—but because he’d learned long ago
that if he parked his Mercedes anywhere near the front, the car would either
end up with door dings, key scratches, or would go missing.

He reached into the glove box and removed
his prized purple bookseller’s badge. He had worked two years to acquire that
thing. Not that he minded. It still amazed him that no one at the palace had
thought of opening a bookstore on the grounds.

It took some convincing—the
resident scholars had to prove to his father’s satisfaction that true
shopkeepers made a living at what they did, and in no way would a bookstore on
the palace grounds provide anyone’s living—but the bookstore finally
happened.

With it came a myriad of book catalogues
and discounts and advanced reading copies and a little bit of bookish swag.

He’d been in heaven. Particularly when he
realized he could attend every single book fair in the Greater World and get
free books.

Not that he couldn’t pay for his own
books—he could, as well as books for each person in the entire kingdom
(which he did last year, to much complaint: it seemed everyone thought they
would be tested on the contents of said gift book. Not everyone loved reading
as much as he did, more’s the pity).

Books had been his retreat since boyhood.
He loved hiding in imaginary worlds. Back then, books were harder to come by,
often hidden in monasteries (and going to those had caused some consternation
for his parents until they realized he was reading, not practicing for his
future profession). Once the printing press caught on, he bought his own
books—he now devoted the entire winter palace to his collection—but
it still wasn’t enough.

If he could, he would read every single
book ever written—or at least scan them, trying to get a sense of them. Even
with the unusually long life granted to people of the Third Kingdom especially
when compared with people in the Greater World (the world that had provided his
Mercedes and this quite exciting book fair), he would never achieve it. There
were simply too many existing books in too many languages, with too many more
being written all the time.

Those dismayed him the most.

He was told to come early. There was a
breakfast for booksellers—coffee and donuts, the website said, free of
charge. He loved this idea of free as an enticement. He wondered if he could
use it for anything back home.

The morning was clear with the promise of
great heat. A smog bank had started to form over the city, and he couldn’t see
the ocean, although the brochures assured him it was somewhere nearby. The
parking lot looked like a city all by itself. It went on for blocks, delineated
only by signs that labeled the rows with double letters.

The only other car in this part of the
lot wasn’t a car at all but one of those minivans built so that families could
take their possessions and their entertainment systems with them.

The attractive black-haired woman unloading
a passel of signs from the van looked familiar to him, but he couldn’t remember
where he had seen her before.

He wasn’t about to go ask her either. His
divorce had left him feeling very insecure, especially around women. Whenever
he saw a pretty woman, the words of his ex-wife rose in his head.

She had screamed them at him in that very
last fight, the horrible unforgettable fight when she took the glass
slipper—the thing that defined all that was good and pure in their
relationship—and heaved it against the wall above his head.

Not
so charming now, are you, asshole? Nope, not charming at all.

He had to concede she had a
point—although he never would have conceded it to her. Still, those
formerly dulcet tones echoed in his brain whenever he looked in the mirror and
saw not the square-jawed hero who saved her from a life of poverty, but a
balding, paunchy middle-aged man who would never achieve his full
potential—not without killing his father, and that was a different story
entirely.

Charming squared his shoulders and pinned
his precious name badge to his shirt. The name badge did not use his real name.
It used his nom de plum—which sounded a lot more romantic than The Name
He Used Because His Real Name Was Stupid.

He called himself Dave. Dave Encanto, for
those who required last names. His family didn’t even have a last
name—that’s how long they’d been around—and even though he knew
Prince was now considered a last name, he couldn’t bring himself to use it.

He couldn’t bring himself to use any
name, really. He still thought of himself as Charming even though he knew his
ex was right—he wasn’t “charming” any more. Not that he didn’t try. It
was just that charming used to come easily to him, when he had a head full of
black black hair, and an unwrinkled face, and the squarest of square jaws.

Prince Charming was a young man’s name,
in truth, and then only the name of an arrogant young man. To use that name now
would seem like wish fulfillment or a really bad joke. He couldn’t go with P.C.
because the initials had been usurped, and people would catch the double irony
of a prince trying to be p.c. with his own name change.

And as for Prince—that name was
overused. In addition to the musician, princes abounded. People named their
horses Prince, for heaven’s sake, and their dogs, and their surrogate children.
In other words, only the nutty named a human being Prince these days, and much
as Charming resented his father, he couldn’t put either of his parents in the
nutty category.

So he told people to call him Dave, which
was emphatically not a family name. Too many family names had been co-opted as
well—Edward, George, Louis, Philippe, even Harry not just by another
prince, but by some potter’s kid as well.

Dave, not David, a man who could go
anywhere incognito any time he liked. Gone were the days when people would do a
double-take, and some would say,
Aren’t
you…?
or
You know you look just like
that prince—whatsisname?—Charming.

Now they nodded and looked past him,
hoping to see someone more important. Which was why he preferred the Greater
World to the Third Kingdom. In the Greater World, they knew he wasn’t
the
Prince Charming. To them,
the
Prince Charming was a man in a fairy
tale, a creature of unattainable perfection, or—more accurately (he
believed) a cartoon character, an animated hero.

But as for magical powers, Charming had
none. Besides that all-encompassing charm, which Ella had told him in no
uncertain terms was gone now. Ella, who got his estates, half of his money, and
custody of their two daughters because—true to form—his father
wouldn’t let him contest the divorce over
girls
.

He sighed and started across the
monstrous parking lot. Several other cars were pouring into the first entrance,
way up front, near the doors. The parking there, he knew from the e-mails he
had gotten, was reserved for booksellers and the disabled—or the
differently abled, as he had been bidden to say. The e-mails claimed he would
need the close-in parking for the hundreds of pounds of books he would lug back
to his car at regular intervals. But he had lugged chain mail and two injured
companions over a hundred miles. He figured he could handle a few books.

BAYOU NOËL by Laura Wright
Tyler, Lynn - For Her Honor [For Her] (Siren Publishing Classic) by Lynn Tyler
Afterparty by Daryl Gregory
Natasha's Awakening by Melville, J. A
Drawing Dead by Andrew Vachss
Spain by Jan Morris
In Case of Emergency by Courtney Moreno
Love Ahead: Expect Delays by Astrid Amara
Poems 1959-2009 by Frederick Seidel
Double Jeopardy by Bobby Hutchinson
Our partner