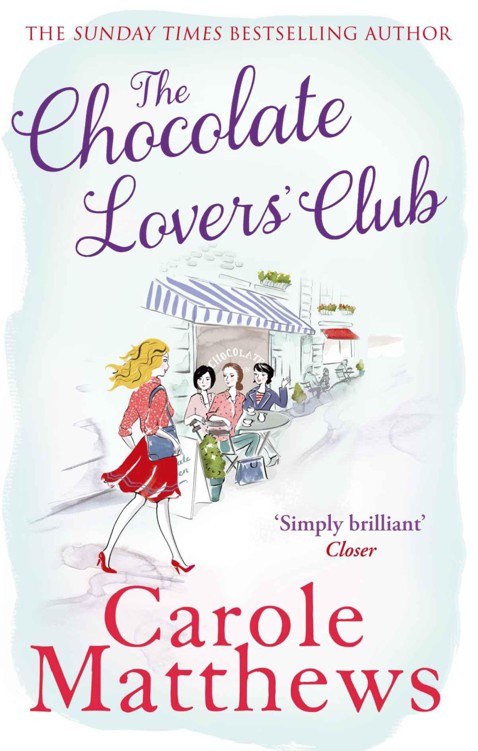 The research for this book has been very taxing – all that chocolate, so little time! A big thanks to all the people who have helped me with my quest and who have turned a passion for chocolate into a major addiction. To Lucy and Barry Colenso and the team at Thorntons – particularly Paul Hales – for their information and enthusiasm. To Sue Castlesmith at Hayley Conference Centres for the totally indulgent chocolate weekend which very nearly acted as aversion therapy. To my mum for agreeing to be smeared in the stuff. To Davina McCall for making great exercise DVDs that have very nearly helped me to keep pace with my calorie consumption. And to Lovely Kev for carrying out the arduous task of helping me eat all that chocolate with his usual verve.

T
here are two types of women, I’ve found. There are those who are addicted to chocolate and there are bitches. Bitches are the sort of women who say, ‘Oh, I couldn’t possibly eat a
whole
Mars Bar, they’re
so
sickly!’ Or, ‘I find
one
square of dark chocolate is
more
than enough, don’t you?’ Or, even worse, ‘I’m not really that
keen
on chocolate. I’m more of a savoury person.’ All said whilst nibbling conservatively on a Twiglet as if it’s a sufficient substitute for sheer pleasure. What’s all that about?

We, the members of The Chocolate Lovers’ Club, are out-and-out addicts. We love the world’s finest foodstuff in all its varied forms. No shame in that.

Today, my good friends and I are assembled at our club headquarters, a cosy haven in one of London’s more salubrious back streets. It’s called Chocolate Heaven – and chocolate heaven it is.

It’s also a week before Christmas and I’d like to describe an outdoor scene of Dickensian snowiness and charm, but I can’t because this is London in the era of global warming and, as such, the sky is school-skirt grey, it’s sheeting down with rain and there’s a gale blowing. We care not. Despite
the elements raging around us we’re out in force. Chantal, Autumn, Nadia and I, Lucy Lombard – chocoholic supreme and founder member of the club – are hunkered down on the sofa in front of the fire. It might not be a roaring log fire, but it’s the modern gas equivalent and works just as well for us, as we’re dug in for the duration. Frankly, no one else is going to get anywhere near our prime space this side of closing time. We have a plate of chocolate fancies in front of us – featherlight sponge topped with a swirl of cappuccino icing – and some delectable fudge brownies. There’s also a selection of the finest truffles known to man made with fresh cream and Madagascar chocolate – a personal favourite. Because they’re made of fresh cream they only last for a couple of days – as if that’s ever going to be a problem! Believe me, this is the closest you can get to an orgasm in a public place. A little appreciative moan escapes my lips.

The owners of Chocolate Heaven, Clive and Tristan, are gloriously gay men – you’re not going to get straight guys running a chocolate shop, right? – who indulge us as we’re their best customers by far. If they’d let us rope off this area and have a
VIPS ONLY
sign put up just for us then we would, but they churlishly insist on having other customers in this place even though they don’t eat nearly as much chocolate as we do.

Our damp coats are steaming gently in a heap next to us. My youthful blond bob, styled into a wondrous arrangement with a pair of straightening irons and pound of Frizz-ease, is now clamped flat to my head. Still, things are looking up. We all have glasses of hot chocolate, spiked
with the intense flavour of red chilli and topped with a veritable excess of whipped cream. My taste buds don’t know whether to swoon or set on fire. Contentment is but a hair’s breadth away. Well, it would be, except for one slight snag.

On the wall of Chocolate Heaven there is a cheery, pottery plaque. Clive, in festive mood, has covered it with a swathe of silver tinsel. It reads:

Survival tips for times of stress

This is our policy statement. Our solemn edict for the way we live our lives. I take a deep breath, get as far as three, then I push in another truffle. A deep sigh of relief escapes before I can edit it out. This is a time of
great
stress. I’m wearing my knickers that bear the legend
FORGET FALLING IN LOVE
,
I WANT TO FALL IN CHOCOLATE
– which might give you some hint as to the nature of my predicament.

‘Haven’t you heard from Crush yet?’ Nadia wants to know from beneath her frothy, cream moustache.

And that’s the slight snag. I shake my head. My current boyfriend, Mr Aiden Holby – aka Crush – is presently Missing In Action. In Australia.

Somehow, being MIA in Australia, on the other side of the globe, makes it worse. If he was MIA in, say, Belsize Park, then I could go round there on the bus or Tube and
bang on his door at regular intervals until I could find out exactly what was happening. As it is, I’m a bit stuck. My fervent emails to him have remained unanswered. My calm but concerned phone calls to him all trip straight to voicemail and, even though his computer tells mine that he’s online, there’s no response. I know not why. We were having long, transcontinental calls via our respective webcams – some of which were getting rather pleasantly steamy. Long live modern technology! Then nothing. Absolutely nothing.

Chantal snorts, loudly. It’s a snort that says, ‘He’s a bloke, what do you expect?’

‘Really,’ I insist. ‘He’s not like other guys.’ For ‘other guys’ read he’s not like Marcus, my bastard, bollocky, recently ex-fiancé, who was the most unfaithful man on the planet. Even if you count Bill Clinton, Tom Jones and Darren Day.

My American friend with the perfect hair and the overflowing bank account snorts again. I try to bite my lip. Even though she’s one of my very best mates in the world, relations between Chantal and me are still a little strained at the moment. This is due to the fact that she dated my ex-boyfriend – not Marcus, but another, much nicer one called Jacob. It’s a very confusing time for me right now. My love-life has been the romantic equivalent of a major pile-up on the M1. Tangled metal, sirens wailing, total gridlock, destruction, bodies everywhere. Excuse me, but I’ll have to ingest some more chocolate simply to keep my system going . . .

Let me fill you in while my chocolate hit kicks in. Jacob
and I enjoyed a brief but mutually satisfying fling, despite never having got down and really dirty, through a combination of very unfortunate circumstances. He was, unlike Marcus, a very lovely guy. Although the shine did rather go off the relationship when I discovered his chosen method of earning a living. Jacob told me he worked in the leisure industry, which wasn’t strictly a lie. It was just that he turned out to be a male prostitute. Why do I always find out that the men in my life have hidden depths way, way too late? My dear friend, Chantal,
did
know about Jacob’s choice of employment, however. And, I suppose, all things considered, that she didn’t really date him, she simply rented him by the hour. The knowledge that she slept with Jacob, even in a professional capacity – while I didn’t get anywhere near his underwear despite wanting to – has, as you can imagine, left things somewhat scratchy between us. Then I got back with Marcus which was a Big Mistake to end all Big Mistakes. He just proved to me that, basically, he cannot be trusted as far as I can throw him. He will never change his philandering ways and I will never again believe that he will. That phase of my life is now over. The debris has been cleared, the motorway of my life is flowing smoothly once more. I’ve matured emotionally and have moved on. Thankfully, I’m now in a loving relationship with my old boss, Aiden ‘Crush’ Holby. Except that he seems to be temporarily misplaced. Maybe it’s nothing more than a pesky traffic cone in the way.

‘Aiden will turn up,’ Autumn says, as if she’s talking about some slippers that I’ve recently lost. She twines a finger round one of her crazy, red curls and gazes earnestly
at me. I’d love to be like Autumn, whose glass is perpetually more than half-full. I mainly have one solitary drip left lurking miserably at the bottom. ‘There’ll be a perfectly plausible explanation,’ she continues. ‘You just wait and see.’

‘I’ll try him again later,’ I tell them. Then I stuff in a few truffles in a desperate manner and my aloof façade is completely blown.

Keeping a relationship going over such differing time zones was, I guess, always going to be a trial, but – believe me – Crush is worth it. He’s lovely, lovely, lovely. By far and away the best boyfriend I’ve ever had, and while it may not be an extensive list, there have been a few.

Aiden Holby and I both work for Targa, a data recovery company that, well, recover data. Don’t ask me anything more technical than that. As I’ve said, Aiden was my boss, which is where my little ‘crush’ on him began – hence the nickname foisted upon him by The Chocolate Lovers’ Club. Now Crush has been promoted to Head of International Something-or-another, terribly important, and that’s why he’s in The Land Down Under while I’m stuck in London in the Sales Department in a temporary and unspecified role and pretty much pass the time trying to avoid doing anything too taxing. I may be the most permanent temp that Targa has ever had, but I don’t intend spending the rest of my days there. Oh no. I’m waiting to find my predestined role in life, you could say. Which, of course, is currently eluding me.

The Essex Serpent by Sarah Perry
Three Lives Of Mary by David M. Kelly
Human Again: A Dystopian Sci-Fi Novel (Cryonemesis Book 1) by Chaim, Moran
The English Spy by Daniel Silva
What to Expect the First Year by Heidi Murkoff
Weight Loss for People Who Feel Too Much by Colette Baron-Reid
Justification for Murder by Elin Barnes
Clara by Kurt Palka
Mistress of Redemption by Joey W. Hill
Wayward Spirits - A Prelude to The Dawning of Power (Godsland Series) by Brian Rathbone
Our partner