Read The Clue of the Hissing Serpent Online

The Clue of the Hissing Serpent 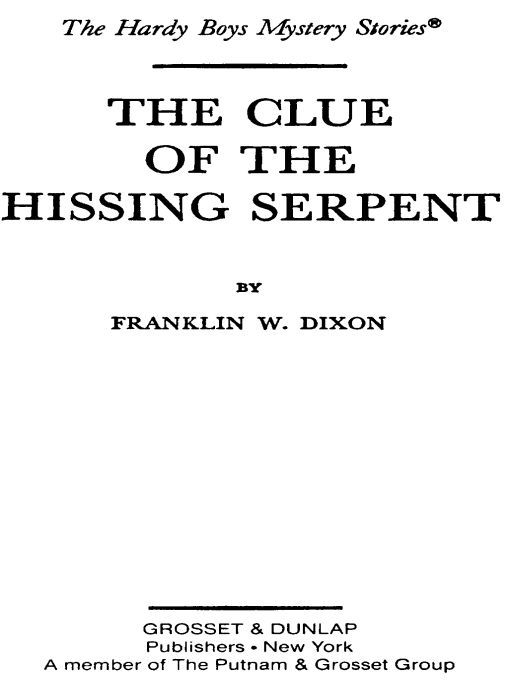 Table of Contents
Title Page
Copyright Page
Â
CHAPTER I - A Runaway Balloon
CHAPTER II - A Custom-made Rocket
CHAPTER III - Tricky Surveillance
CHAPTER IV - A Hissing Blast
CHAPTER V - Cat Trap
CHAPTER VI - A Risky Chance
CHAPTER VII - Aerial Surprise
CHAPTER VIII - A Tough Break
CHAPTER IX - A Gathering Storm
CHAPTER X - A Strange Hope
CHAPTER XI - Over the Cliff
CHAPTER XII - The King's Curse
CHAPTER XIII - The Third Man
CHAPTER XIV - The Oriental Connection
CHAPTER XV - Faked Out!
CHAPTER XVI - A Bold Caper
CHAPTER XVII - The Chinese Note
CHAPTER XVIII - Kim-Kim
CHAPTER XIX - The Payoff
CHAPTER XX - The Beggars of Tai Pak
Â
THE CLUE OF THE HISSING SERPENT
Why is a wealthy sportsman so frightened by the serpent design on a mysterious balloon that he begs Frank and Joe Hardy to protect him? And who stole the ancient, life-size chess king which is to be presented to the winner of the world chess championship?
These questions and others equally as baffling in this exciting mystery seem to defy explanations.
On the ground and in the air Frank and Joe find themselves the targets of diabolical enemies. An odd clue that they discover leads them across the Pacific to Hong Kong. There the young detectives match wits with their adversaries. How they help the police smash an international criminal organization provides an electrifying climax to one of the most challenging cases the Hardy boys have ever tackled. 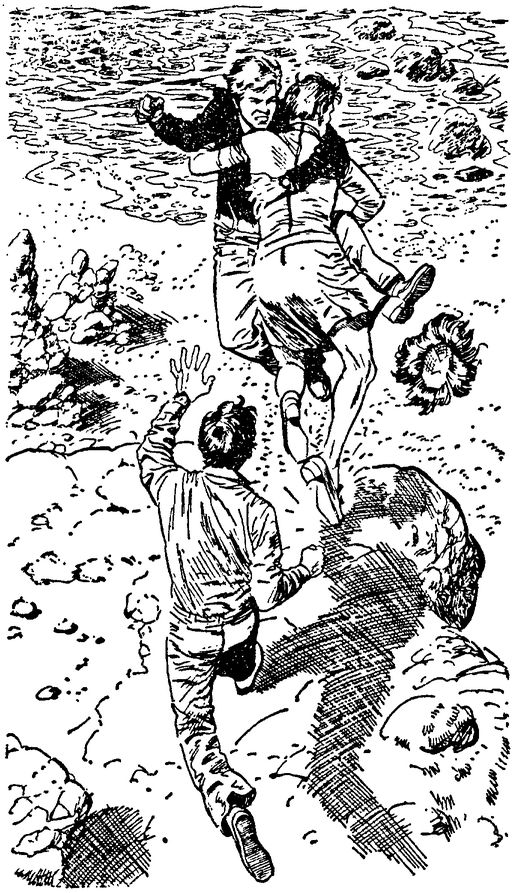 To Frank's horror, both fell over! 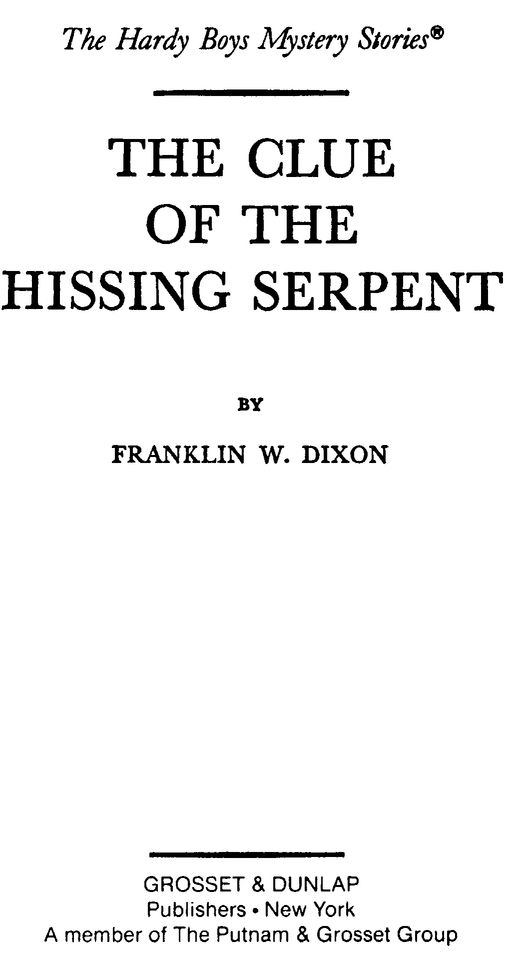 CHAPTER I
A Runaway Balloon
“YOUR father sounded desperate,” Aunt Gertrude said, looking worried. “He wants you to meet him at four o'clock in the lobby of the Treat Hotel at Oak Knolls. Better hurry!”
Frank and Joe Hardy had just arrived home from a swim at the Bayport pool when their agitated aunt met them at the kitchen door. The telephone message seemed innocent enough, but Aunt Gertrude always feared the worst for her famous detective brother Fenton.
“Oh, yes,” she continued, “he mentioned the word Falcon. What does that mean?”
“Falcon!
Holy crow, Frank, let's go!” Joe urged excitedly.
The boys bolted out the door and into their car. Joe took the wheel and they sped off.
Falcon was a secret word used by the two young detectives and their father. It meant
dan
ger ahead
. But what was the danger Fenton Hardy had foreseen in their meeting?
They mulled it over as they hit the speed limit and arrowed along the highway due west from Bayport. Mr. Hardy had not mentioned any new case. Hence, if there was danger, it had sprung up suddenly. Frank and Joe were worried.
Dark-haired Frank, who was eighteen, glanced at his watch. “Three o'clock. We should make it in time.”
Joe, a blond seventeen-year-old, nodded. “I just hope it doesn't rain. Might slow traffic.”
The sky, which had been bright and sunny during the morning, had turned ominously gray in the west and a chilly wind began to dissipate the late June heat.
“Looks like a storm is heading our way,” Frank said. “And traffic's slowing already. But it can't be because of the weather. I wonder what happened.”
“I guess there's been an accident.” Joe craned his neck out the window for a better look. But all he could see was a line of cars moving at a snail's pace. Horns were honking impatiently. Then traffic stopped completely.
People began stepping out of their cars, and Joe did the same. Suddenly his eyes grew wide in amazement.
“Frank! I see the trouble!”
“What is it?”
“A balloon! Flying pretty low and coming closer to the road. Everybody's stopped to look at it.”
Frank reached into the glove compartment and grabbed binoculars which the boys kept handy. He jumped out to scan the green-and-white striped balloon. Like a giant pendulum, it whipped dangerously back and forth.
“It must be caught in some kind of crazy wind current,” Frank said. “Here, take a look, Joe.”
Now the balloon was no more than a hundred yards away. Joe focused on the two passengers hanging desperately to the sides of the basket.
“What are they going to do?” he cried out. “Land on the highway?”
Suddenly the balloon veered to the right, coming to rest in a field beside the road not far from the Hardys.
Frank pulled the car over to the side. “Come on, Joe. Maybe we can be of some help.”
A lot of other motorists had the same idea, and soon a huge crowd raced across the pasture to where the balloon was gradually deflating.
The boys were in the forefront and reached it first. The two balloonists were just climbing out. Frank's jaw dropped open in amazement as the younger one turned around to face them. It was none other than their staunch buddy Chet Morton!
“Hello, Frank. Hi, Joe,” Chet said.
“What in the world are you doing here?” Joe demanded.
The chunky, freckle-faced youth squinted up at the collapsing balloon and remarked casually, “I'm taking lessons. Didn't want to tell you until I became a full-fledged balloonist.”
His companion walked up to the group. “Oh, fellows,” Chet said, “this is Mr. Albert Krassner. And these are my friends, Frank and Joe Hardy.”
The man seemed to be about forty, with thinning black hair and a paunch. He had a broad, fleshy face, full lips, a wide nose and slightly droopy eyelids, which made him look half asleep. Yet there was a brisk alertness in his voice as he spoke.
“Glad to meet you.” He extended a pudgy hand to the young detectives. “We really got into trouble. A sudden wind came up and we tried to land, but a faulty vent prevented us from getting down fast enough. We almost drifted onto the highway!”
“A faulty vent?” Joe asked.
Chet nodded. “You pull a cord to vent when you want to descend more rapidly than simply letting the balloon's air cool. The vent lets the air outâthe longer you hold it open, the quicker. Ten feet above the ground you rip the top if the wind is high. It pulls off the circular panel and lets the hot air out in a rush.” 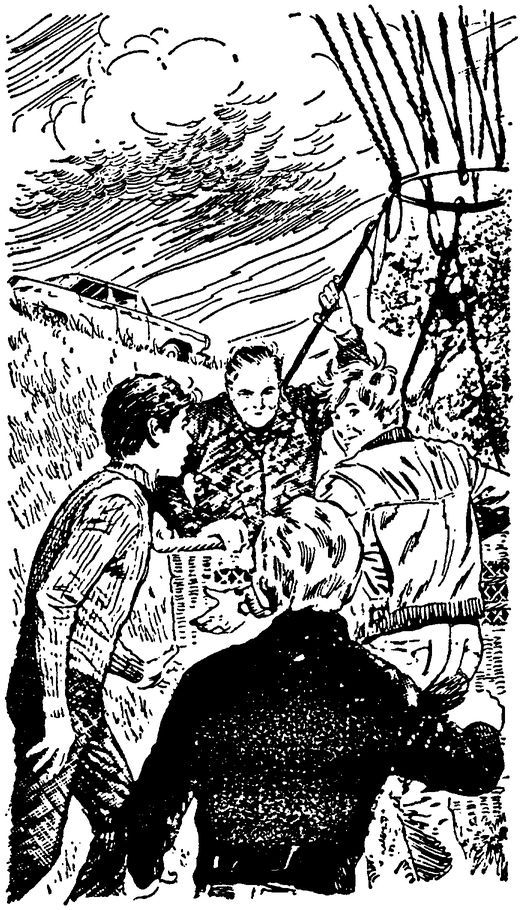 “Chet, what are you doing here?” Joe demanded.
“I see,” Joe said. “But you have to be just above the spot where you want to land to do that.”
“Right,” Chet said.
Krassner went back and continued to deflate the balloon, answering questions of other onlookers. The Hardys took Chet aside and asked him about his new friend.
“He's a rich guy,” Chet said. “An investment banker. Belongs to the Lone Tree Balloon Club near Oak Knolls.”
“How'd you meet him?” Frank inquired.
“I used to hang around the club,” Chet said. “Krassner took a liking to me and offered these lessons free.”
“This could have been your last lesson, Chet!” Frank said. “You almost got killed!”
“And if you're such a buddy of ours, how come you didn't let us in on your new hobby?”
“Now don't get sore,” said Chet. “I told you, I wanted to make it a surprise.”
“It sure was,” Frank said. Then he glanced at his watch. They had twenty minutes to reach their destination. “We've got to meet our dad at the Treat Hotel in Oak Knolls,” he said. “See you later.”
Traffic had started to unsnarl with the aid of two State Police men. As the boys hastened to their car, they saw a pickup truck drive across the field to retrieve the balloon. A small black sports car followed it.
“Probably Krassner's,” Joe commented. “Looks like an Italian job.”
The Hardys crept along for a while until they could pick up speed. Joe passed dozens of cars, but eased off on the gas when the needle exceeded the speed limit. “If we get a ticket, we'll never get there on time,” he said.
Finally they reached the exit for the small town of Oak Knolls. By now it was ten minutes past four. When they drove into the parking lot, the clock on the tower in the town square stood at four-twenty.
The boys rushed into the hotel. “Any message for Frank and Joe Hardy?” Frank asked the desk clerk.
“No, nothing. Were you expecting to meet someone?”
“Yes.” Frank looked worriedly about the lobby.
“Would you like accommodations?”
“No, thank you,” Joe replied. He noticed a meeting room off to one side with the door open. The boys walked in. The place smelled smoky and cigarette butts lay in numerous ashtrays. Printed agendas were scattered on folding chairs and long tables.
On a dais at the far end of the room stood a blackboard. Chalked on it were numbers indicating that a business meeting had taken place.
“Maybe Dad attended,” Frank mused. “It couldn't have ended long ago.” He took a closer look at the blackboard. In one corner something was printed in small letters. “Joe,” he exclaimed, “it says
Mayday Room 211 Falcon!”
“Dad's in trouble!” Joe said. “In Room 211!”