The Cold Hand of Malice 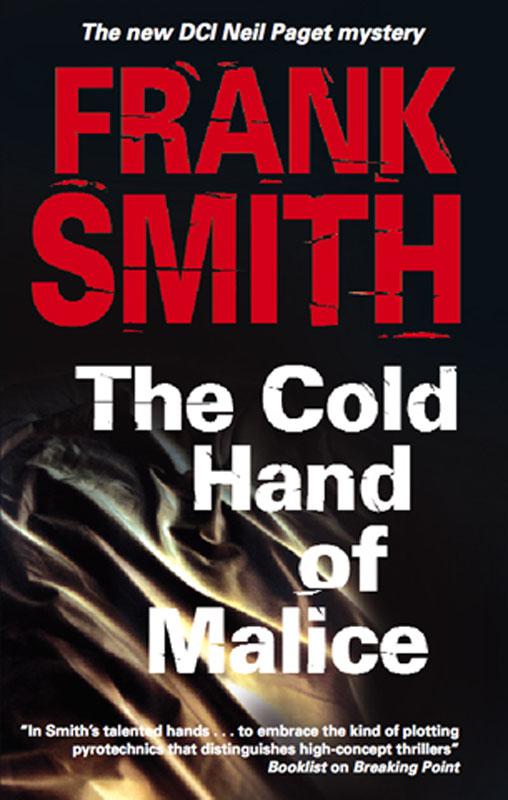 CANDLES FOR THE DEAD

THE COLD HAND OF MALICE

THE COLD HAND OF MALICE

First published in Great Britain and the USA 2009 by

The right of Frank Smith to be identified as the author of this work has been asserted in accordance with the Copyright, Designs & Patents Act 1988.

The cold hand of malice. – (A DCI Neil Paget mystery)

Detective Sergeant John Tregalles stirred in his chair as the television screen went blank. ‘What did you do that for?’ he demanded of his wife. ‘I was watching that.’

‘No, you weren’t,’ Audrey said placidly as she set the remote aside and went on with her knitting. ‘You were miles away; have been all evening. Hardly said a word since dinner. It’s not enough that you worked all through the weekend and now you’re into another week without a break and your mind’s still there, isn’t it? And you were quite short with Olivia when she came to say goodnight.’

‘Yes well, sorry, love. I didn’t mean to be. But you’re right, I was thinking about work. Perhaps I should go up and say goodnight properly.’

Audrey shook her head. ‘No need,’ she said. ‘The kids can read you just as well as I can. Olivia just looked at me and rolled her eyes as if to say “Dad’s off again”. She understands.’

‘I’ll have a word with her in the morning,’ he said, settling back in his chair. ‘It’s just that I’ve been trying to work out what to do about these burglaries. I spent all day today going over everything again, but I’ll be damned if I can see what else we can do. Trouble is, I’m lead on this one, and Paget phoned this afternoon to tell me he’ll be in tomorrow, and he wants to see a progress report. The problem is, there
isn’t
any progress, so God knows what I’m going to give him. And if Alcott decides to sit in, I’m dead!’

Audrey paused to look up and catch her husband’s eye. ‘I’m sure it can’t be
quite
that bad,’ she said soothingly. ‘What is it that makes this one so difficult, anyway? I know you’ve been on it for quite a while and I know you’ve not been happy about the way it’s going, but I don’t know much else except what I read in the papers. Would it help to talk it through the way we used to? I used to like to hear what was going on at work, but we haven’t done that for ages, and to tell the truth I miss it.

‘What’s it been now?’ she coaxed when Tregalles remained silent. ‘Must be a couple of months since all this started. How many have there been since then? Four . . .? Five . . .?’

‘Four more. The one last Wednesday makes it five altogether, and we’re no closer to a solution today than we were back then at New Year. It’s not so much what they take as it is the damage they do once they’re inside. Its getting worse each time, and that’s what worries me. God knows what might happen if an owner comes back while they’re in the house.’

‘So it’s vandalism, then.’ Audrey said. ‘I thought you said they were burglaries?’

‘They are burglaries, technically, according to the 1968 Theft Act,’ he said, ‘but you’re right, they do have more to do with vandalism than theft. Although unlawful damage is also part of the act as well, so—’

‘Dunbar Road, wasn’t it?’ Audrey broke in. She had no intention of being sidetracked into a discussion of what was or wasn’t a burglary. ‘The first one? New Year’s Eve? I remember reading about it in the paper.’

‘That’s right.’ Tregalles hunched forward on the edge of his chair, hands clasped in front of him. ‘Broke in through the back door. It looked straightforward enough at the time. Kids or young tearaways looking for money, making a mess of the place just for the hell of it when they didn’t find much. They took a few bits of cheap jewellery and odds and ends, then smashed a radio and the glass in a china cabinet in a fit of pique on their way out. Took some food with them as well; some cheese and cold beef from the fridge.

‘The next-door neighbour caught a glimpse of them when they knocked over a dustbin as they nipped over the garden wall. She was out in her greenhouse setting the heat for the night, so she went straight back in and phoned us. Uniforms found several footprints at the bottom of the wall, trainers by the look of the tread, which was almost worn off. Forensic said they could get a match – if we can bring them the shoes. They’d tracked in a bit of mud from the garden, but not enough to leave any worthwhile impressions behind, so all we were left with were a few bits of thread caught on the corner of a cabinet.

‘It was too dark for the neighbour to get a good look at them, but she was quite sure they were young by the way they went over the wall. Apart from that, we don’t have any kind of description. Uniforms reckoned they were dealing with a spur-of-the-moment job – kids looking for drug money, probably. They took down statements, spoke to some of the neighbours, but they knew from the start they were wasting their time.

‘Couple of weeks later there was another one in Abbey Road. Same sort of thing. Broke in through the back door while the owner was away at her sister’s wedding in Chester. She was only away the one night, but they must have known they wouldn’t be disturbed, because they stayed long enough to have a sit-down meal before they left. Took something like forty quid from a jug tucked away in one of the kitchen cupboards, but nothing else as far as she could tell. That’s when Uniforms decided it could be the same pair and the case was handed off to me.’

Audrey frowned. ‘And no one saw or heard anything suspicious? Didn’t see them come or go? Didn’t hear anything?’

Tregalles shook his head. ‘Not as far as we can find out. But then it was the middle of January, pitch dark from five o’clock on, and there were no lights anywhere near the back of the houses, so it’s hardly surprising that no one saw them. Which means we don’t even know
when
they went in. The house was empty from the Friday afternoon until midday Sunday, so it could have been any time after dark on Friday or Saturday night.

‘Ten days later there was another one in Westfield Lane. The couple there are both teachers, and they were out for the evening at a retirement party for a colleague. They left the house just before six, and came back around midnight to find the place had been broken into. Once again, nothing of any real value was missing, but there was broken crockery all over the kitchen floor. It looked as if someone had simply opened the cupboards and swept everything out, then gone through the house lashing out at anything that caught their eye. Mindless, stupid, idiotic vandalism. And to top it off they stopped to make sandwiches and drink two cans of beer before they left. SOCO’s done their best, but apart from a few dog hairs that shouldn’t have been there, and a few threads that might or might not belong to the villains, they couldn’t come up with anything worthwhile.’

Tregalles sat back in his chair, brow furrowed in concentration. ‘Number four was in View Street about three weeks ago,’ he continued. ‘Same sort of thing, but they did even more damage there. Went through every room. Broke good china, mirrors – they seem to have a thing about mirrors and glass – pictures, TV set. And they didn’t just bash the screen in; they battered the thing to bits. One of them uses some sort of pry bar – the one they use to break in the door, flat and heavy – while the other one uses a piece of pipe to bash things with. And, as usual, they stopped to have a meal. Took their time about it, too; a proper fry-up, which meant they had to know that the owners would be away for some time and they wouldn’t be disturbed. We found more dog hair on one of the kitchen chairs, but Forensic tells us they aren’t from the same dog.

‘Which isn’t exactly a fat lot of help in a country that’s got almost more bloody dogs than people, is it?’ He paused, and Audrey could hear the tension in his voice when he spoke again. ‘But this latest one in Holywell Street has me really worried,’ he said, ‘because it looked as if the place had been hit by a tornado. The woman, Mrs Pettifer, collapsed when she saw the damage. China, mirrors, TV, chair seats ripped, and a lovely old grandfather clock literally smashed to bits. And then they sat down and ate half an apple pie. Even heated up some custard to go with it, and the only clue they left behind was – you guessed it – more dog hair, but from different dogs again.’

Tregalles spread his hands in a helpless gesture. ‘I’m afraid it’s got me stumped, love,’ he confessed. ‘When I first took on the case I thought we were dealing with a couple of kids on drugs who liked to smash things, but these two are too careful. They haven’t left a single print behind, not even on the plates and knives and forks and spoons they used. In fact they washed them afterwards. About the only other thing we have are the marks made by the tools they used to get in and to smash things, but that won’t get us anywhere until we catch them – if we ever do. I keep telling myself that they simply have to make a mistake sometime, or someone will spot them going in or coming out, but that hasn’t happened so far.