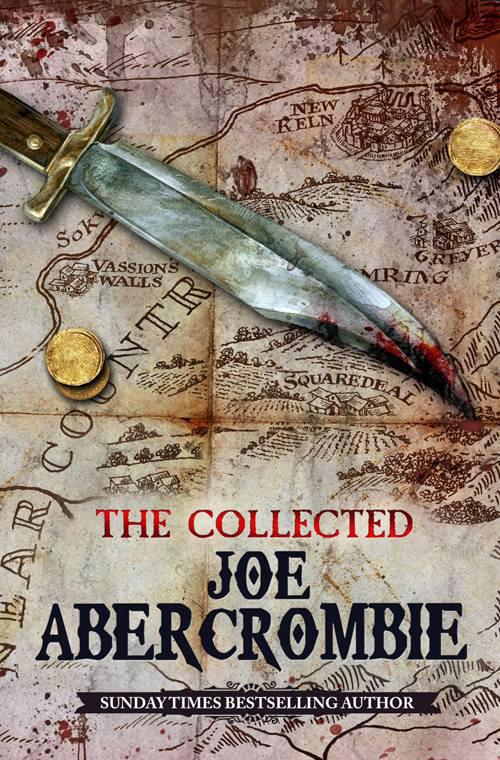 Before They Are Hanged

Before They Are Hanged

THE FIRST LAW: BOOK ONE

For the Four Readers
You know who you are

PART I – ‘The blade itself incites to deeds of violence’

No Choice at All

The Wide and Barren North

First of the Magi

An Offer and a Gift

The King of the Northmen

A Road Between Two Dentists

The Course of True Love

How Dogs are Trained

Barbarians at the Gate

The Remarkable Talents of Brother Longfoot

Her Kind Fight Everything

Never Bet Against a Magus

The House of the Maker

Each Man Worships Himself

Back to the Mud

The Tools we Have

L
ogen plunged through the trees, bare feet slipping and sliding on the wet earth, the slush, the wet pine needles, breath rasping in his chest, blood thumping in his head. He stumbled and sprawled onto his side, nearly cut his chest open with his own axe, lay there panting, peering through the shadowy forest.

The Dogman had been with him until a moment before, he was sure, but there wasn’t any sign of him now. As for the others, there was no telling. Some leader, getting split up from his boys like that. He should’ve been trying to get back, but the Shanka were all around. He could feel them moving between the trees, his nose was full of the smell of them. Sounded as if there was some shouting somewhere on his left, fighting maybe. Logen crept slowly to his feet, trying to stay quiet. A twig snapped and he whipped round.

There was a spear coming at him. A cruel-looking spear, coming at him fast with a Shanka on the other end of it.

‘Shit,’ said Logen. He threw himself to one side, slipped and fell on his face, rolled away thrashing through the brush, expecting the spear through his back at any moment. He scrambled up, breathing hard. He saw the bright point poking at him again, dodged out of the way, slithered behind a big tree trunk. He peered out and the Flathead hissed and stabbed at him. He showed himself on the other side, just for a moment, then ducked away, jumped round the tree and swung the axe down, roaring loud as he could. There was a crack as the blade buried itself deep in the Shanka’s skull. Lucky that, but then Logen reckoned he was due a little luck.

The Flathead stood there, blinking at him. Then it started to sway from side to side, blood dribbling down its face. Then it dropped like a stone, dragging the axe from Logen’s fingers, thrashing around on the ground at his feet. He tried to grab hold of his axe-handle but the Shanka still somehow had a grip on its spear and the point was flailing around in the air.

‘Gah!’ squawked Logen as the spear cut a nick in his arm. He felt a shadow fall across his face. Another Flathead. A damn big one. Already in the air, arms outstretched. No time to get the axe. No time to get out of the way. Logen’s mouth opened, but there was no time to say anything. What do you say at a time like that?

They crashed to the wet ground together, rolled together through the dirt and the thorns and the broken branches, tearing and punching and growling at each other. A tree root hit Logen in the head, hard, and made his ears ring. He had a knife somewhere, but he couldn’t remember where. They rolled on, and on, downhill, the world flipping and flipping around, Logen trying to shake the fuzz out of his head and throttle the big Flathead at the same time. There was no stopping.

It had seemed a clever notion to pitch camp near the gorge. No chance of anyone sneaking up behind. Now, as Logen slid over the edge of the cliff on his belly, the idea lost much of its appeal. His hands scrabbled at the wet earth. Only dirt and brown pine needles. His fingers clutched, clutched at nothing. He was beginning to fall. He let go a little whimper.

His hands closed around something. A tree root, sticking out from the earth at the very edge of the gorge. He swung in space, gasping, but his grip was firm.

‘Hah!’ he shouted. ‘Hah!’ He was still alive. It would take more than a few Flatheads to put an end to Logen Ninefingers. He started to pull himself up onto the bank but couldn’t manage it. There was some great weight around his legs. He peered down.

The gorge was deep. Very deep with sheer, rocky sides. Here and there a tree clung to a crack, growing out into the empty air and spreading its leaves into space. The river hissed away far below, fast and angry, foaming white water fringed by jagged black stone. That was all bad, for sure, but the real problem was closer to hand. The big Shanka was still with him, swinging gently back and forth with its dirty hands clamped tight around his left ankle.

‘Shit,’ muttered Logen. It was quite a scrape he was in. He’d been in some bad ones alright, and lived to sing the songs, but it was hard to see how this could get much worse. That got him thinking about his life. It seemed a bitter, pointless sort of a life now. No one was any better off because of it. Full of violence and pain, with not much but disappointment and hardship in between. His hands were starting to tire now, his forearms were burning. The big Flathead didn’t look like it was going to fall off any time soon. In fact, it had dragged itself up his leg a way. It paused, glaring up at him.

If Logen had been the one clinging to the Shanka’s foot, he would most likely have thought, ‘My life depends on this leg I’m hanging from – best not take any chances.’ A man would rather save himself than kill his enemy. Trouble was that the Shanka didn’t think that way, and Logen knew it. So it wasn’t much of a surprise when it opened its big mouth and sank its teeth into his calf.

‘Aaaargh!’ Logen grunted, and squealed and kicked out as hard as he could with his bare heel, kicked a bloody gash in the Shanka’s head, but it wouldn’t stop biting, and the harder he kicked, the more his hands slipped on the greasy root above. There wasn’t much root left to hold on to, now, and what there was looked like snapping off any moment. He tried to think past the pain in his hands, the pain in his arms, the Flathead’s teeth in his leg. He was going to fall. The only choice was between falling on rocks or falling on water, and that was a choice that more or less made itself.

Once you’ve got a task to do, it’s better to do it than to live with the fear of it. That’s what Logen’s father would have said. So he planted his free foot firmly on the rock face, took one last deep breath, and flung himself out into empty space with all the strength he had left. He felt the biting teeth let go of him, then the grasping hands, and for a moment he was free.

Then he began to fall. Fast. The sides of the gorge flashed past – grey rock, green moss, patches of white snow, all tumbling around him.

Logen turned over slowly in the air, limbs flailing pointlessly, too scared to scream. The rushing wind whipped at his eyes, tugged at his clothes, plucked the breath out of his mouth. He saw the big Shanka hit the rock face beside him. He saw it break and bounce and flop off, dead for sure. That was a pleasing sight, but Logen’s satisfaction was short-lived.

The water came up to meet him. It hit him in the side like a charging bull, punched the air out of his lungs, knocked the sense out of his head, sucked him in and down into the cold darkness . . .

‘The blade itself incites to deeds of violence’

Logen opened his eyes a crack. Light, blurry bright through leaves. This was death? Then why did it hurt so much? His whole left side was throbbing. He tried to take a proper breath, choked, coughed up water, spat out mud. He groaned, flopped over onto his hands and knees, dragged himself up out of the river, gasping through clenched teeth, rolled onto his back in the moss and slime and rotten sticks at the water’s edge.