The Collected Stories of Lorrie Moore 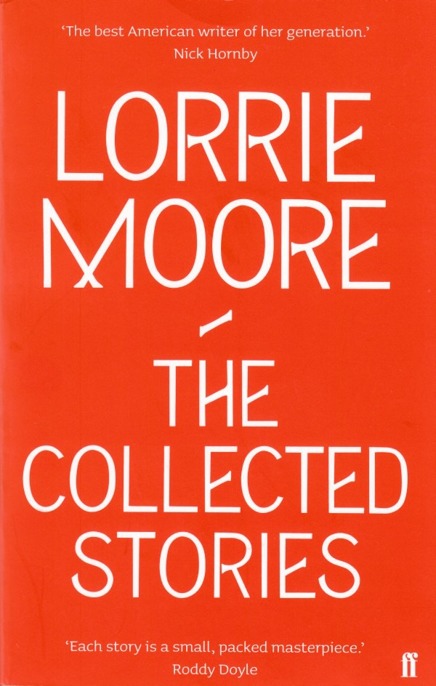 Which Is More Than I Can Say About Some People

What You Want to Do Fine

People Like That Are the Only People Here: Canonical Babbling in Peed Onk

Places to Look for Your Mind

Escape from the Invasion of the Love-Killers

Strings Too Short to Use

How to Be an Other Woman

The Kid's Guide to Divorce

How to Talk to Your Mother (Notes)

Amahl and the Night Visitors: A Guide to the Tenor of Love

How to Become a Writer

The Collected Stories of LORRIE MOORE

First published in 2008 by Faber and Faber Ltd

This paperback edition first published in 2009

The right of Lorrie Moore to be identified as author of this work has been asserted in accordance with Section 77 of the Copyright, Designs and Patents Act

This book is sold subject to the condition that it shall not, by way of trade or otherwise, be lent, resold, hired out or otherwise circulated without the publisher's prior consent in any form of binding or cover other than that in which it is published and without a similar condition including this condition being imposed on the subsequent purchaser

bake mckurty was
no stranger to the parasitic mixings of art and commerce, literature and the rich. "Hedge funds and haiku!" he'd exclaimed to his wife, Suzy—and yet such mixings seemed never to lose their swift, stark capacity to appall. The hustle for money met the hustle for virtue and everyone washed their hands in one another. It was a common enough thing, though was there ever enough soap to cut the grease? "That's what your lemon is for," Suzy would say, pointing at the twist in the martini he was not supposed to drink. Still, now and again, looking up between the crabmeat cocktail and the palate-cleansing sorbet sprinkled with, say, fennel pollen dust, he felt shocked by the whole thing.

"It's symbiosis," said Suzy as they were getting dressed to go. "Think of it being like the krill that grooms and sees for the rock shrimp. Or that bird who picks out the bugs from the rhino hide."

"So we're the seeing-eye krill," he said.

"A lot in this world has to do with bugs," said Bake.

"Food," she said. "A lot has to do with grooming and food. Are you wearing that?"

"Lose the—what are those?"

"I'm the sighted krill," she said. She smoothed his hair, which had recently become a weird pom-pom of silver and maize.

"Well, I wasn't going to say that either."

"You look good. Whatever it is your wearing. See? I say nice things to
you!"

He ripped off the suspenders. "Well, here. You may need these."

they were staying
at a Georgetown B and B to save a little money, a townhouse where the owner-couple left warm cookies at everyone's door at night to compensate for their loud toddler who by six a.m. was barking orders and pointing at her mother to fetch this toy or that. After a day of sightseeing (all those museums pre-paid with income taxes; it was like being philanthropists come to investigate the look of their own money) Suzy and Bake were already tired. They had come back early for a pre-dinner lie-down. "Tea and crumpets," suggested Bake.

"Crumpets?" Propped up on the bed with her elbow, Suzy had given him a look of cartoon seduction, one leg sprung shakily into the air.

"
Grumpets
?" said Bake "I'm too old for crumpets." Did all attraction lead to comedy—without exactly arriving? Did every marriage degenerate into vaudeville?

When they were ready to leave for the evening, they hailed a cab and recited the fundraiser's address to the cabbie who nodded and said ominously, "Oh, yes."

never mind good
taste, here at this gala even the usual diaphanous veneer of seemliness had been tossed to the trade winds. Voodoo economics had become doo-doo economics, noted Bake. The fundraiser for
Lunar Lines Literary Journal
—3LJ as it was known to its readers and contributors; "the magazine" as it was known to its staff, as if there were no others—was being held in a bank. Or at least a former bank, one which had recently gone under, and which now sold squid-ink orchietti beneath its vaulted ceilings, and martinis and granache from its former teller stations. Wood and marble were preserved and buffed, glass barriers removed. In the evening light the place was golden. It was cute! So what if subtle boundaries of occasion and transaction had been given up on? So what if this were a mausoleum of greed now danced in by all. He and Suzy had been invited. The passive voice could always be used to obscure blame.

His invitation, however, to this D.C. fundraiser seemed to Bake a bit of a fluke, since
Man on a Quarter, Man on a Horse
, Bake's ill-selling biography of George Washington (in a year when everyone was obsessed with Lincoln, even the efficiently conflated Presidents' Day had failed to help his book sales) would appear to fit him to neither category of guest. But
Lunar Lines
, whose offices were in Washington, had excerpted a portion of it, as if in celebration of their town. And so Bake was sent two free dinner tickets. He would have to rub elbows and charm the other guests—the rich, the magazine's donors who would be paying 500 dollars a plate. Could he manage that? Could he be the court jester, the town clown, the token writer at the table? "Absolutely," he lied.

Why had he come? Though it was named after the man he had devoted years of affectionate thought and research to, he had never liked this city. An ostentatious company town built on a marsh—a mammoth, pompous, chit-ridden motor vehicle department run by gladiators. High-level clerks on the take, their heads full of unsound soundbites and falsified recall. "Yes! How are you? It's been a while?" Not even "it's been a long time" because who knew? Perhaps it hadn't been. Better just to say, neutrally, "It's been a while," and no one could argue.

He clung to Suzy. "At least the wine is good," she said. They weren't really mingling. They were doing something that was more like a stiff list, a drift and sway. The acoustics made it impossible to speak normally and so they found themselves shouting inanities then just falling mute. The noise of the place was deafening as a sea, and the booming heartiness of others seemed to destroy all possibility of happiness for themselves.

"Soon we'll have to find our table," he shouted, glancing out at the vast room filled with a hundred white-clothed circles, flickering with candlelight. Small vases of heather sprigs that could easily catch fire had been placed in the center as well. So were little chrome cardholders declaring the table numbers. "What number are we?"

Suzy pulled the tag from what he facetiously called her "darling little bag" then shoved it back in. "Seventy-nine," she said. "I hope that's near the restroom."

"We flew here—remember? I wouldn't bring pot on an airplane."

"We're losing our sense of adventure. In all things."

"This is an adventure!"

At the ringing of a small bell everyone began to sit—not just the ones in wheelchairs, whom he had begun to envy. Bake let Suzy lead as they wended their way, drinks in hand, between the dozens of tables that were between them and number 79. They were the first ones there, and when he looked at the place cards and saw that someone had placed Suzy far away from him, he quickly switched the seating arrangements and placed her next to him, on his left. "I didn't come this far not to sit next to you," he said, and she smiled wanly, squeezing his upper arm. These kinds of gestures were necessary, since they had not had sex in six months. "I'm sixty and I'm on antidepressants," said Bake, when Suzy had once (why only once?) complained. "I'm lucky my penis hasn't dropped off."

They remained standing by their seats, waiting for their table to fill up: Soon a young investor couple from Wall Street who had not yet lost their jobs. Then a sculptor and her son. Then an editorial assistant from 3LJ. Then lastly, to claim the seat to his right, a brisk young Asian woman in tapping heels. She thrust her hand out to greet him. Her nails were long and painted white—perhaps they were fake: Suzy would know, though Suzy was now sitting down and talking to the sculptor next to her.

"I'm Linda Santo," the woman to his right said, smiling. Her hair was black and shiny and long enough so that with a toss of the head she could swing it back behind her shoulder and short enough that it would fall quickly forward again. She was wearing a navy-blue satin dress and a string of pearls. The red shawl she had wrapped over her shoulders she now placed on the back of her seat. He felt a small stirring in him. He had always been attracted to Asian women, though he knew he mustn't ever mention this to Suzy, or to anyone really.

"I usually go by 'Bake.'" He accidentally gave her a wink. One had to be very stable to wink at a person and not frighten them.

"
Bake
?" She looked a little horrified—if one could be horrified only a little. She was somehow aghast—and so he pulled out her chair to show her that he was harmless. No sooner were they all seated then appetizers zoomed in. Tomatoes stuffed with avocados and avocados with tomatoes. It was a witticism—with a Christmassy look though Christmas was a long way away.

"So where are all the writers?" Linda Santo asked him while looking over both her shoulders. The shiny hair flew. "I was told there would be writers here."

"No, I'm an evil lobbyist," she said, grinning slightly. "Are you a writer?"

"In a manner of speaking, I suppose," he said.

"You are?" She brightened. "What might you have written?"

"What might I have written? Or, what did I actually write?"

He cleared his throat. "I've written several biographies. Boy George. King George. And now George Washington. That's my most recent. A biography of George Washington. A captivating man, really, with a tremendous knack for real estate. And a peevishness about being overlooked for promotion when he served in the British army. The things that will start a war! And I'm not like his other biographers. I don't rule out his being gay."

The Serbian Dane by Leif Davidsen
Little Black Dress with Bonus Material by Susan McBride
The Prophecy by Melissa Luznicky Garrett
Dreams of the Forgotten by Lexi Ander
Come Pour the Wine by Cynthia Freeman
The Complete Works of William Shakespeare In Plain and Simple English (Translated) by SHAKESPEARE, WILLIAM
The Alpha Plague 3 by Michael Robertson
The Language of Paradise: A Novel by Barbara Klein Moss
Cupcakes, Trinkets, and Other Deadly Magic (Dowser Series) by Doidge, Meghan Ciana
Uninvited: An Unloved Ones Prequel #2 (The Unloved Ones Prequels) by Richey, Kevin
Our partner