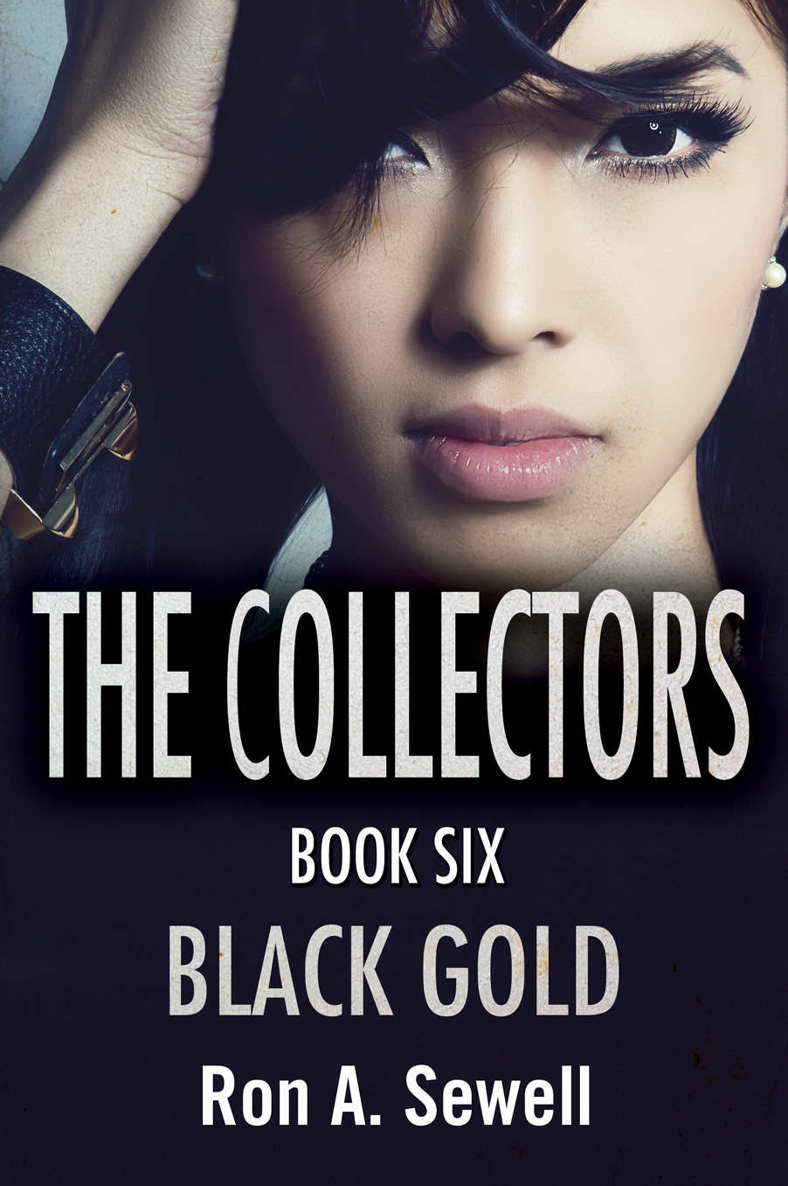 All rights reserved. No part of this book may be reproduced or transmitted in any form or by any means, electronic or mechanical, including photocopying, recording, or by any information storage system and retrieval system, without permission in writing from the copyright owner.

The Collectors – Book Six is published by Appolonia Books, who can be contacted at
[email protected]
.

The Collectors – Book Six is the copyright of the author Ron A Sewell 2015. All rights are reserved.

The cover is designed by Berni Stevens Design. All rights are reserved.

All characters are fictional and any resemblance to anyone living or dead is accidental.

With much thanks to

Also by Ron A Sewell

A Basketful of Sleepers

The Collectors Book One

“How are things, Mr Young?”

Second Officer Andy Young looked up from the electronic chart. “On course and on time, sir.”

Wood stared through the bridge windows. “I hope you realise if the fracking companies keep producing oil, we’ll be out of a job before long.”

Both officers sensed the fear in his voice. An intruder clad in a black coverall, pressed an Uzi machine pistol against the man’s head.

The slim woman spoke, her voice harsh. “On the deck. Hands behind your heads.” She sneered. “One word and I kill you.”

James stepped forward as a storm of anger rose within him. “I am the Captain of this vessel and you can’t...”

A flash of disgust filled her eyes. The Uzi shifted and fired. A gaping red hole appeared in his chest and a mass of blood and bone spewed from his back. The storm of bullets came to an end and the stench of cordite filled the bridge.

Andy’s face paled, his body shook as bile filled his throat. He and the helmsman dropped to the deck.

Terrified, Andy could not bring himself to look at the blood-covered corpse.

By way of the bridge doors, men armed with automatic rifles and machetes entered. In seconds they descended to the accommodation decks.

“I do what I want.” She kicked the corpse. “Dump this overboard.”

Her two minders nodded and without comment slung their weapons over their shoulders. Each grabbed an arm and together they dragged Wood’s body across the spotless deck, leaving a bloody trail.

The woman checked the controls, the radar, and eased back the throttles.

When her men returned she tossed a plastic bag full of heavy duty cable ties on the deck and pointed. “Tie those two.”

Secured, the men dragged Andy and the helmsman to the rear of the bridge.

Dazed, his heart pounding, Andy tried to fix into his memory her short, slim build, and the cut of her dark hair; though he was aware the description fitted thousands. He wanted to kill her but a sense of hopelessness swept over him as all he could do was watch.

From below came the crash of cabin doors broken open with blows from rifle butts. Men cried out in pain. Shots boomed along narrow passages. An unfamiliar language filled the air as officers and crew tumbled from their bunks.

In groups, the crew shivering with fear, a few naked, arrived on the bridge. They gathered but none said a word. Their attackers forced them to the deck and secured their arms and legs, pulling the cable ties tight. Three watched over them with weapons cocked.

One man, his face bloodied and bruised, they forced to his knees. His brow creased with unease. “Please don’t kill me, please.”

“Your name?” the woman demanded.

Her hard eyes locked on his. “This vessel will take time to slow. If you want to live, you and your crew will unload the oil into my tankers.”

A shiver passed through Daniel but his face remained fearful. “Do I have a choice?”

His breathing became rapid as his voice faltered, “And then you’ll kill us?”

He would never forget the symbol of fire and destruction on the back of her right hand, a red dragon’s head tattoo.

She grabbed a handful of his hair and yanked him to his feet.  From her pocket she pulled a folded sheet of paper. “Set this course and speed and don’t touch your Automatic Identification System. That remains operative. You will send this message to your owners.”

He read the note.
‘Computer programme causing power configuration fluctuations. Am continuing to maintain steerage way. Will inform when repairs are completed.’
“And if they ask questions?”

Her lips curled into a wicked smile as she tapped the barrel of her machine pistol against his chest. “You will answer. I need one day without interference to discharge your cargo.”

At the control console he punched several buttons on the keyboard to adjust the course and speed. From its clamp, he released the radio mike, set the company frequency and reported the glitch.

While her men kept an eye on the crew, two minders positioned themselves behind Daniel with their AK47s clutched in their hands. The woman watched as two tankers turned to port and starboard. Any miscalculation would be a disaster. After several hours, the three vessels with Goliath at the centre came together. Huge inflatable fenders separated each hull while the crews secured head and stern wires.

The butt of her Uzi poked Daniel. “Select your team. Have them secure the hoses and work the pumps.”

Frightened, Daniel gathered his thoughts. The stench of urine and excrement wafted across the bridge. “You can’t leave my crew trussed like turkeys for thanksgiving. Look at them.”

Her eyes did not blink as the barrel of her Uzi smashed into his face. His nose twisted to one side as blood poured through his fingers and onto his white shirt.

“Talk like that again and I’ll let you watch while I kill your crew one by one. Choose your men and transfer my oil.”

Stunned, he held a handkerchief to his face as he selected the chief engineer and five men.

One of the pirates cut the cable ties. The chief pointed to one of his junior engineers.

The younger man rubbed his wrists.

As circulation returned to their limbs, they staggered away and descended the central staircase. Daniel clenched his fists, turned and followed. Four armed men trailed behind them.

For a few minutes she examined the console and flicked several switches. Section by section the main deck illuminated.

A tall, thin man holding his AK47 entered and nodded.

She shouted at the guards, “Cut their leg ties and take these men aft.”

The terrified crew experienced a moment of dread as the guards dealt hard blows with their rifle butts before they sliced their leg bonds.

With her Uzi slung over her shoulder she said in an ice-cold voice, “You will board one of the lifeboats and leave.”

Eager to escape, each man clambered to his feet and hobbled to the stern.

Andy shouted, “Wait.” He held up his arms for the nearest pirate to cut the ties.

The man laughed and motioned with his hand across his throat.

Andy clambered up the access ladder and to his surprise found the entrance door unclipped. “Men, go to the far end, sit and secure your safety harnesses. Don’t touch anything.”

Before entering, his eyes scanned the lifeboat hull and ramp; it appeared untouched. On closing the access hatch he fastened the six clips and slid into the coxswain’s seat, secured his harness and prayed. “Right, heads hard back, standby.” He removed the wire from the safety pin and tugged it free. “Three, two, one.” With a jerk, he pulled the steel handle back hard. A sharp crack rang out as the release claw operated. The boat slid into the night and dived as an arrow into the sea. On striking the water it disappeared, to surface forty metres astern of Goliath.

The men cheered in unison.

“Mickey,” shouted Andy. “In the forepeak you’ll find a knife.”

On finding the knife, Mickey sliced the plastic ties of those nearest. On its journey aft each man freed another.

Andy pressed the engine start button. Silence. Taken aback he undid his harness and unscrewed the wing nuts securing the engine cover. He and the nearest man lifted it clear.

Sickened, he slumped back into his seat. “Bastards. Battery’s gone.”

Andy lifted his head. “Fucking bastards.” He punched the cover in frustration. “I hate this shit; we’ve no engine, lights, or radio. We’d better check the rations.”

“The emergency rations, drinking water are untouched and the solar-still is in one piece,” said Ramos, a general purpose rating.

Andy lifted his head and glanced forward. “What’s so funny?”

“Can’t stand fucking amateurs.” He held up his sat-phone. “Shoved it where the sun don’t shine. I can call the company and have the navy here in a couple of hours.”

“I’d rather you didn’t unless you want to kill those still on Goliath.”

“When do you suggest?”

Without taking his eyes off Andy, Arthur bellowed, “Let me get this straight. You want us to remain in this lifeboat and wait for you to decide when I use my phone. No fucking way.”

A huge, barrel-chested man behind Arthur tapped his right shoulder. As he turned, a clenched fist struck him between the eyes, the next to the side of his head.

Joe Block, a deckhand, removed the phone from Arthur and tossed it aft. “My brother’s on Goliath.”

Andy caught the phone. “Thanks. Survival’s not a problem; we have enough food and water, and can catch fish. I will head one shift and Arthur the other. Those who have crapped themselves can go for a seawater wash. Your clothes will dry in the sun.”

Arthur studied Andy. “Why me?”

“And why not? You’re an officer. You'll get your phone back in two days and then you can contact the world. Twelve hour shifts, those not required I suggest you sleep.”

Arthur turned to Joe. “You and the rest are my team. Those in front of me, Andy’s team. As the man said, sleep.”

Dawn crept over the horizon as six men, still wearing their clothes, jumped into the sea. Andy kept watch as he took the battery from the phone and placed it into his trouser pocket. The phone he slipped into his shirt pocket. He glanced at the cloud-free sky and smiled. “Great weather for a cruise.”

Now clean, he grabbed the men’s clothes and draped them over the craft. They swam for a few minutes longer before clambering on board and let the morning sun dry their skin.

Back inside he and his team removed the sea anchor from its container and cast it into the water to reduce their drift.

In amongst the stores he discovered fishing hooks and reels of line. He whistled as he went aft and utilising a life jacket as a cushion he sat on the stern. With weights added to the line he dropped the sparkling spinner with hook into the water.

Daniel led his team to the main deck. The men on the tankers alongside were busy shifting sixteen inch diameter hoses across the gap between them.

Chief engineer Harold Holt turned to his junior. “Tony, port side and I’ll manage starboard. Daniel, would you like me to straighten your nose?”

“Never knew you were a medic.”

“No, I’m an engineer,” said Harold, his face expressionless. “Sit on that locker and hold the sides. This will hurt.”  With his thumb on one side of the bent snout and finger on the other. “Are you ready Danny boy?”

He held up his thumb.

“On the count of three. One, two.” With a twist and a ‘fuck you’ from Daniel the nose straightened.