Read The Color of Water in July Online

The Color of Water in July 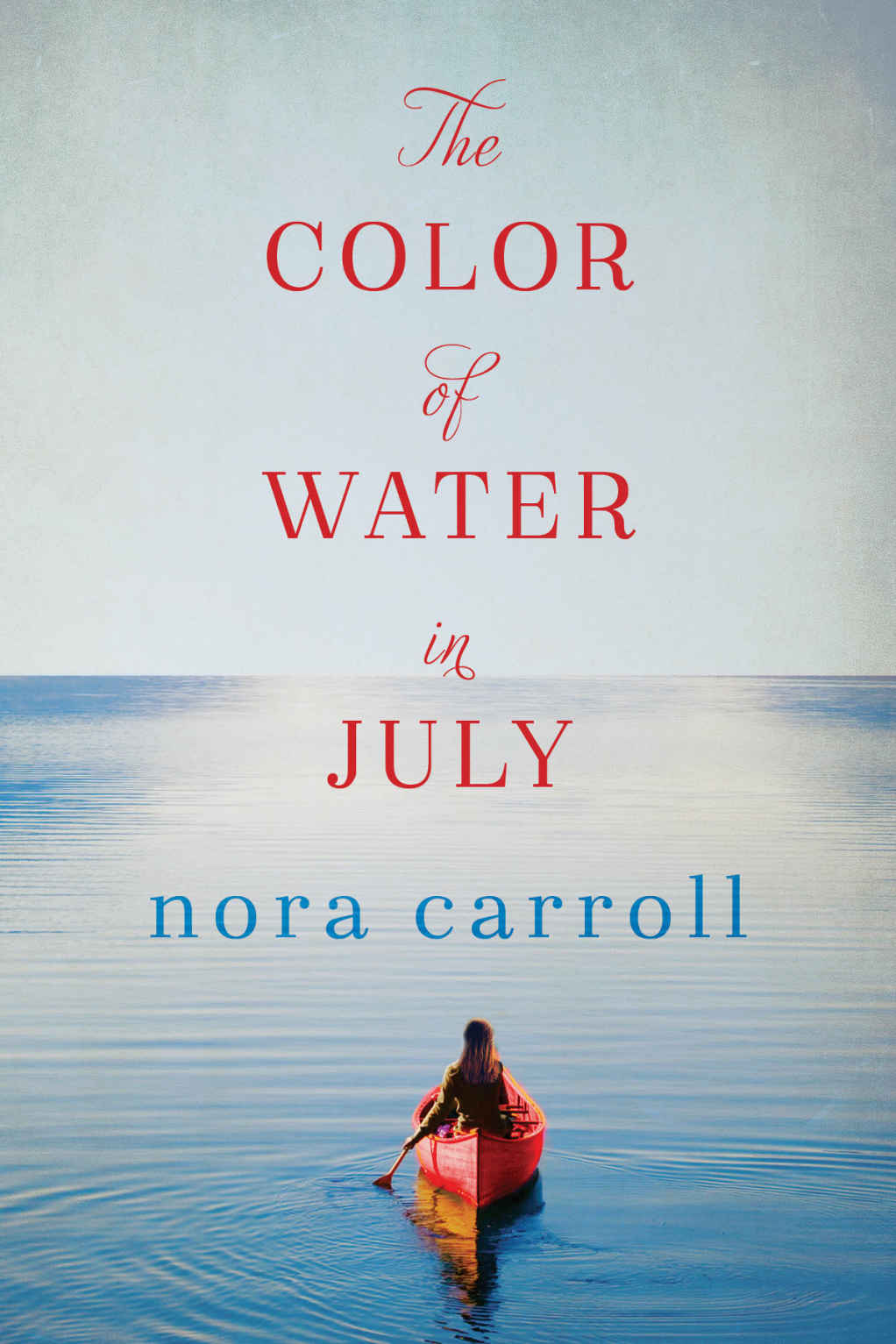 “Nora Carroll’s story of hidden family secrets is a tale beautifully woven through time. This elegant novel about a life-changing discovery by a woman returning to the lakeside cottage of her youth will transport you into a warm Michigan summer and keep you there until the very last secret is revealed. Carroll’s talent shines brightly in this mysterious, romantic, and mesmerizing debut.”

“The love that burned between characters in the book was very deep and emotional. So much so that it left me longing, hoping and wishing for the loves to be united.”

“You will be amazed at the ability of Nora Carroll’s writing.”

Amazon, the Amazon logo, and Lake Union Publishing are trademarks of
Amazon.com
, Inc., or its affiliates.

In memory of ZWL, who appointed me family historian, and CWC, who haunted my imagination.

There must be a precise moment when wet cement turns dry, when it no longer accepts footprints or scratched-in declarations of love; an ordinary moment, unnoticed, just like any. But in that moment, the facts of a life can change.

At the age of thirty-three, Jess thought she knew everything there was to know about leaving places: getting on a plane or stepping into a car, and moving forward, on to the next thing.

She had not yet learned the art of going back.

Normally, she didn’t go away in July. She usually stayed in the city—a form of atonement. No, that was silly. What did she have to atone for? It was just that she got more work done when the university was mostly empty—found it easier to concentrate on the eighteenth century in France when the marble library was an appealing respite from the New York heat.

She looked through the window grating. If you stood at just the right angle, you could see a sliver of the Hudson—today it was blue. Not a brilliant blue, but still a summer blue, the color of water in July.

From where she stood in the living room, she could see through the door into the kitchen where Russ stood at the stove, stirring hot oil with a wooden spoon, his wiry body taut and athletic, his gestures precise. It was warm in the kitchen. From time to time, he reached up to brush his longish brown hair out of his face, to push his wire-rimmed glasses farther up the bridge of his nose.

“Well, no.” She paused, weighing whether she could end her sentence there. “Actually, my grandmother left me some property that I need to take care of.”

She couldn’t even say it without feeling an odd squeeze in her chest, a faint flush in her cheeks. Even the expression—
that I need to take care of—
rang oddly in her ears, echoing like a kind of accusation.

Jess remembered the brief conversation with the real-estate agent.

“I see no need to actually be there,” she had told the agent.

“Of course you want to be there. I’m sure there are items in the cottage that have sentimental value.”

Since then, she had stayed in a keyed-up state of expectation. At night, lying in bed, she could feel her heart thumping in her rib cage, louder, more insistent than usual. The night before, she had pushed away her damp, sweaty sheets, got up to splash water on her face, and stared at herself, wan and surprised-looking in the bathroom mirror.

This could not properly be called returning. There was no call to feel like this. She was imputing qualities—breath, flesh, blood—to a structure made of pine board, shingle, and stone.

Jess truly believed that you could put the past behind you. She had not been back to the cottage in sixteen years.

“Your grandmother left you some property? I thought your grandmother was still alive.” Russ was chopping mushrooms now, using a cleaver so that the halves fell neatly apart.

“No, she died . . . last month.” Jess paused, momentarily flustered that she had never mentioned it to Russ.

“She was old . . . ” Jess realized she didn’t know exactly how old her grandmother had been. She was born in 1902. Jess did the math her in head. If she were still alive, she would have just turned ninety-four.

“She lived in a nursing home,” Jess said. “They told me she died in her sleep.”

“So tell me about the house,” Russ said.

“It’s just a summer cottage. It’s been in the family for a long time. I guess she thought my mother didn’t want it, so she left it to me.”

“What are you going to do with it?”

Russ turned back to the cutting board, starting to chop the green and red peppers, seeming to let the subject drop.

Had she really gotten off so easily? She was feeling guilty that she hadn’t invited him, especially since Russ was always on the scout for new locales for the magazine. Jess knew they were getting to that point, where it was almost expected that they would include each other in their plans—that was the point when Jess, in the past, had tended to bolt.

Well
,
it was barely worth mentioning. Such a short trip. She would be there and back over a long weekend and the place would be sold.

“How’s the piece on the Connecticut farmhouse coming?” she asked, hoping to change the subject.

“Country kitsch in Connecticut,” he said. “Would you believe they collect hand-painted duckies?”

“Very expensive, very tasteful duckies. But they have a ten-million-dollar view of the Long Island Sound. Makes for a great photo shoot.”

Russ was passionate about his work at
Architectural Home
.

“Okay, so now tell me all about this cottage in Michigan,” Russ said. “I didn’t know people did cottages in Michigan. Isn’t that a Maine kind of thing?”

Jess pictured the big old gabled cottage, perched up on a bluff above a clear blue Michigan lake. It had been her grandmother’s summer home for over ninety years. At one time in her life, it had been Jess’s favorite place on the face of the earth.

“It looks out over a spot called Hemingway Point. They say Hemingway used to fish there when he was young.”

“You’ve been there before?”

“Just, you know . . . didn’t want to go there anymore.” She hoped Russ couldn’t hear the catch in her throat, but he was concentrating on stirring the sauce and seemed to let the subject drop.

A few minutes later, they were seated across from one another at Jess’s battered kitchen table, the aroma of Russ’s fresh marinara sauce filling the room. Russ stabbed a forkful of spaghetti, expertly wrapping it around his fork so that it neatly tucked into his mouth. “It’s, like, a little cabin . . . ?”

Jess should have known he wouldn’t let it go that easily.

“Nine bedrooms?” She could feel the faint heat of embarrassment rising along her cheekbones. Her apartment in Fort Washington was a ratty sixth-floor walk-up in a marginal neighborhood—its only redeeming feature was the tiny sliver of a view.

“You’ve just inherited a nine-bedroom cottage on a lake across from Hemingway Point . . . and you didn’t even tell me?”

Jess nodded miserably, sorry that she had piqued his interest.

Jess could hear a note of professional interest creep into his voice. Russ was a house junkie—always on the lookout for new locales for the magazine.

“It’s very old—probably falling apart by now,” Jess said. She looked away from Russ, out the window.

“I’d love to see it,” Russ said. He was smiling at her, eager, interested. She should be happy—she had been telling herself recently that she might be in love with him.

“Do you want to come with me?” she said, regretting it as soon as she had opened her mouth.

Russ’s eyes lit up and he smiled.

“I was waiting for you to ask.”

Jess felt a thud of guilt when she realized that she had been trying to avoid asking him.

The road into the Wequetona Club was unprepossessing. Over the years, M-66 had been built up a bit, and so, where Jess had remembered only farms, they drove past the Jiffy Mart, Gail’s Nails, and the County Farm and Post. Pine Lake was not visible at all from the road. The gently rolling woods and meadows were unremarkable, except perhaps for a particular clarity of the light. At the crest of a hill, there was a turnoff onto a gravel lane.

“Here,” Jess said. Russ wheeled the rental car onto the dirt road, the tires crunching on gravel. Dense woods lined both sides of the road. As the car rounded a bend and the entrance came into view, Jess felt her stomach tighten. Two simple stone pillars flanked the road; a line of stately hemlocks lined up behind them. On one pillar hung a small black sign inscribed
W
EQUETONA
C
LUB
.

Just beyond, Jess saw the white wooden clubhouse, crisply painted and with red geraniums in the window boxes, surrounded by green Adirondack chairs. Off to the left were two lawn tennis courts, and, directly ahead, she caught her first glimpse of the lake. On this sunny July day, it was a fierce and glittery blue.

Jess wasn’t really listening anyway. She was just looking as the car crunched along, barely at a crawl. The lake, the trees, the prim row of cottages. Close her eyes and she could
still
see it, so deeply was this scene engraved in her mind, and so little did it change over time. Almost impossibly little. And yet didn’t it change? Because she herself had certainly changed. The last time she’d been here, she’d been full of dreams. Now, she liked to hide herself in libraries and study the forgotten dreams of others.

She reached over to clasp Russ’s hand, but she jarred his voice recorder, and he pulled his hand away, so she turned to look at the lake, so bright it almost blinded her.

“Over here,” she said to Russ. “We’re the last cottage on the south side. Just next to the woods.”

A Little Bit of Everything Lost by Stephanie Elliot
Nairobi Heat by Mukoma Wa Ngugi
LIKE RAIN by Elle, Leen
Success by Martin Amis
Yours for Eternity: A Love Story on Death Row by Damien Echols, Lorri Davis
An American Werewolf in Hoboken by Dakota Cassidy
After The Dance by Lori D. Johnson
Thrillers (Sex & Violence Book 2) by Close, Amanda
Cyrosphere: Hidden Lives by Deandre Dean, Calvin King Rivers
The Rise and Fall of Khan Noonien Singh, Volume One by Greg Cox
Our partner