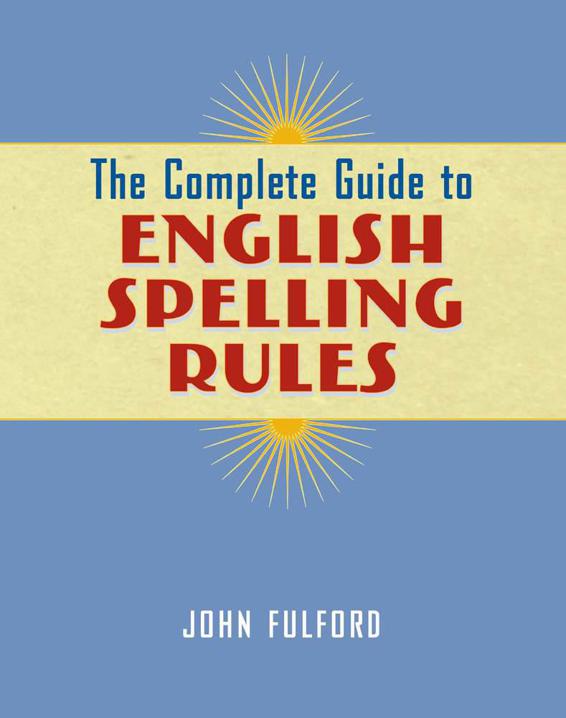 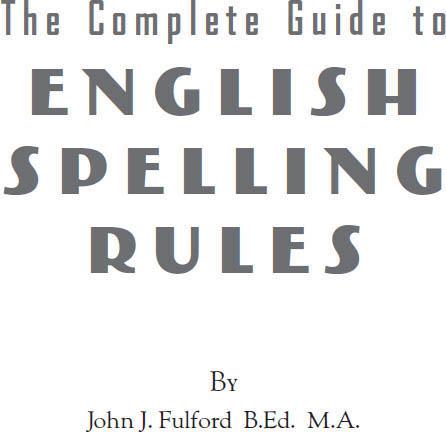 Published by
A
STORIA
P
RESS

In each of the countries peopled by Englishmen,
a distinct dialect will gradually be formed; the principal of which will be that of the United States. In fifty years from this time American English will be spoken by more people, than any other dialect of the language, and in one hundred and thirty years, by more people than any other language on the globe....

A Note on Usage in This Book

Chapter 10: The Past Tense

Chapter 17: Changing the
y
to
i

Chapter 18: Using
qu
Plus a Vowel

Chapter 19: The
i before e
Rule

Chapter 48: Using
of
and
off

Chapter 51: Using
fore
and
for

A
lthough English is described as a Germanic language, barely half of English words are of Germanic origin. English is a polyglot language that has borrowed words from almost every other language across the globe. The result is an extraordinary mixture of spellings that are either a great irritation or a source of fascination to the student. However, time and usage have tended to blend all the various spellings into a number of distinct groups, each of which have their own rules.

This book attempts to show that English spelling is not an illogical mish-mash of sounds and letters. On the contrary, English spelling does indeed have logical rules that govern how the words are spelled.

Many people believe that there can only be guides to English spelling and that because of its complexity, strict rules could not possibly exist. But I believe this to be illogical. English is the most important language in the world. It’s used in both diplomacy and international business and in every form of communication. When every word in a written communication must be clear and unambiguous, it is obvious that spelling must follow basic rules.

For a spelling rule to have validity, it must prove to be correct in a very high percentage of cases. When the number of exceptions to the rule is too high, then the rule is not valid. Almost all the spelling rules in this book are valid to a very high level. At least two of the rules are completely valid and have no exceptions whatsoever.

Because of the unique history of the language there are often exceptions to many of the rules, but when compared to the number of words that do indeed follow the rule, these exceptions often prove to be quite rare. It is interesting to note that when a particular spelling changes or an incorrect spelling becomes popular, it is often a move toward the spelling rule than a move away. It is clear that those who use the language want conformity to logical spelling rules.

Strange as it may seem, considering the importance of spelling, not much school time is devoted to spelling. Almost all the formal instruction is in the primary grades, and this usually consists of the memorization of a weekly list of twenty words. The emphasis is on rote memorization and the students are given little if any explanation of why the words are spelled that way. The amount of time devoted to spelling decreases in the middle grades, and in high school it is not taught as a subject. There are no college or university courses in spelling, nor are students in teacher training colleges given spelling proficiency tests. The result is that many classroom teachers may be poorly equipped to teach spelling. Adults who are good spellers will
find that their skill is due to constant reading rather than any actual study of spelling. They remember the correct way to spell a word and perhaps, by recognizing the root word and the various affixes, they can trace the origin of the word. But they do not know why the word is spelled that way.

E
nglish has been described as a “borrowing” language, and this is undeniably true. Although English is called a Germanic language, probably only half the words in the dictionary are of Germanic origin. The rest we have acquired from Latin and a score of other languages. English is thus a polyglot language that has always borrowed words from other languages and always will, so that today we can say that almost every language in the world has contributed at least a few words to English.

The Germans and Scandinavians, who invaded Britain after the Romans departed, each brought a different dialect, sometimes even a different language. There were Angles and Saxons from what is now Germany, Jutes and Danes from the land we now call Denmark, Frisians from the Netherlands, and Vikings from Norway and Sweden. Although the invaders all strove to carve out separate kingdoms on the island they had invaded, their languages gradually blended into a common tongue, but one with many regional variations. This was the period that produced the richness and the extraordinary diversity of regional accents and dialects that exist to this day in the British Isles.

The French that the Normans brought to England was not quite the same as the French spoken in other parts of France. This is because the Normans were descendants of the “Northmen,” or Vikings, who had settled in France. But their language was undeniably French, and it infused the Anglo-Saxon language with a very heavy dose of Latin-based words.

More Latin words arrived during the medieval period, when Latin was the international language of Europe, and the church, the universities, diplomacy, law, commerce, and many governments conducted their business in Latin. With the renewed interest in the classics during the Renaissance and the surge in literacy, Greek also became a subject of study and it too gave us many words.

Made to Love by Syd Parker
The Mourning After by Weinstein, Rochelle B.
Someone To Watch Over Me by Taylor Michaels
One Soul To Share by Lori Devoti
Bad Girls Book 1: The Temptress by Silver, Jordan
The Pickup by Nadine Gordimer
An Irish Country Wedding by Patrick Taylor
The Turkey Wore Satin by J.J. Brass
Trophy Husband by Lauren Blakely
Shore Lights by Barbara Bretton
Our partner