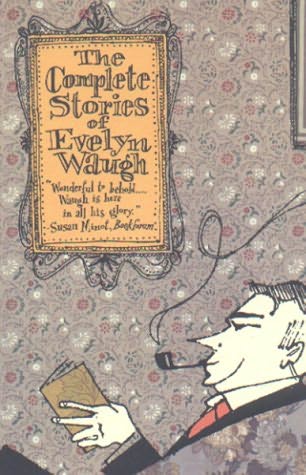 The Complete Stories Of Evelyn Waugh

EVELYN WAUGH wrote short fiction throughout his life. His literary career—which gained critical momentum in 1928, when his first book, a biography of Dante Gabriel Rossetti, and his first novel, Decline and Fall, were both published—actually commenced in 1926, with the publication of Waugh's first post-Oxford story.

Through the decades that followed, as Waugh produced sixteen novels and nearly a dozen nonfiction works, he continued to write short fiction. Most of his stories appeared originally in periodicals ranging from Harper's Bazaar to The Atlantic and Good Housekeeping. The stories were subsequently published in book form in Waugh's lifetime in such collections as Mr. Loveday's Little Outing and Other Sad Stories, Tactical Exercise, and Basil Seal Rides Again; an additional volume, Charles Ryder's Schooldays, was published posthumously.

The Complete Stories of Evelyn Waugh, which makes all of Waugh's short fiction available to American readers for the first time, is adapted from a scholarly edition compiled by Ann Pasternak Slater and published in Great Britain by the Everyman's Library. Following is bibliographical information regarding the initial publication of each of Evelyn Waugh s stories.

"A House of Gentlefolks," introduced as "The Tutor's Tale" in The New Decameron: The Fifth Day, ed Hugh Chesterman, Basil Blackwell, Oxford, 1927.

"Out of Depth," subtitled "An Experiment Begun in Shaftesbury Avenue and Ended in Time," Harper's Bazaar, London, December 1933.

"The Sympathetic Passenger," for the "Tight Corner" series in The Daily Mail, 4 May 1939.

"Compassion," The Month, August 1949. A shorter version appeared as "The Major Intervenes," The Atlantic, July 1949.

"The Curse of the Horse Race," Little Innocents: Childhood Reminiscences by Dame Ethyl Smith and others, Cobden-Sanderson, London, 1932.

"Antony, Who Sought Things That Were Lost," The Oxford Broom, June 1923.

A HOUSE OF GENTLEFOLKS

I arrived at Vanburgh at five to one. It was raining hard by now and the dreary little station yard was empty except for a deserted and draughty-looking taxi. They might have sent a car for me.

How far was it to Stayle? About three miles, the ticket collector told me. Which part of Stayle might I be wanting? The Duke's? That was a good mile the other side of the village.

With a little difficulty I found the driver of the taxi, a sulky and scorbutic young man who may well have been the bully of some long-forgotten school story. It was some consolation to feel that he must be getting wetter than I. It was a beastly drive.

After the crossroads at Stayle we reached what were obviously the walls of the park, interminable and dilapidated walls that stretched on past corners and curves with leafless trees dripping on to their dingy masonry. At last they were broken by lodges and gates, four gates and three lodges, and through the ironwork I could see a great sweep of ill-kept drive.

But the gates were shut and padlocked and most of the windows in the lodges were broken.

"There are some more gates further on," said the school bully, "and beyond them, and beyond them again. I suppose they must get in and out somehow, sometimes."

At last we found a white wooden gate and a track which led through some farm buildings into the main drive. The park land on either side was railed off and no doubt let out to pasture. One very dirty sheep had strayed on to the drive and stumbled off in alarm at our approach, continually looking over its shoulder and then starting away again until we overtook it. Last of all the house came in sight, spreading out prodigiously in all directions.

The man demanded eight shillings for the fare. I gave it to him and rang the bell.

After some delay an old man opened the door to me.

"Mr. Vaughan," I said. "I think his Grace is expecting me to luncheon."

"Yes; will you come in, please?" and I was just handing him my hat when he added: "I am the Duke of Vanburgh. I hope you will forgive my opening the door myself. The butler is in bed today—he suffers terribly in his back during the winter, and both my footmen have been killed in the war." Have been killed—the words haunted me incessantly throughout the next few hours and for days to come. That desolating perfect tense, after ten years at least, probably more ... Miss Stein and the continuous present; the Duke of Vanburgh and the continuous perfect passive.....

I was unprepared for the room to which he led me. Only once before, at the age of twelve, had I been to a ducal house, and besides the fruit garden, my chief memory of that visit was one of intense cold and of running upstairs through endless passages to get my mother a fur to wear round her shoulders after dinner. It is true that that was in Scotland, but still I was quite unprepared for the overpowering heat that met us as the Duke opened the door. The double windows were tight shut and a large coal fire burned brightly in the round Victorian grate. The air was heavy with the smell of chrysanthemums, there was a gilt clock under a glass case on the chimneypiece and everywhere in the room stiff little assemblages of china and bric-a-brac. One might expect to find such a room in Lancaster Gate or Elm Park Gardens where the widow of some provincial knight knits away her days among trusted servants. In front of the fire sat an old lady, eating an apple.

"My dear, this is Mr. Vaughan, who is going to take Stayle abroad—my sister, Lady Emily. Mr. Vaughan has just driven down from London in his motor."

Perhaps I ought here to explain the reason for my visit. As I have said, I am not at all in the habit of moving in these exalted circles, but I have a rather grand godmother who shows a sporadic interest in my affairs. I had just come down from Oxford, and was very much at a loose end when she learned unexpectedly that the Duke of Vanburgh was in need of a tutor to take his grandson and heir abroad—a youth called the Marquess of Stayle, eighteen years old. It had seemed a tolerable way in which to spend the next six months, and accordingly the thing had been arranged. I was here to fetch away my charge and start for the Continent with him next day.

"Did you say you came by train?" said the Duke.

"By the twelve fifty-five."

"But you said you were coming by motor."

"No, really, I can't have said that. For one thing I haven't got a motor."

"But if you hadn't said that, I should have sent Byng to meet you. Byng didn't meet you, did he?"

Lady Emily put down the core of her apple and said very suddenly:

"Your father used to live over at Oakshott. I knew him quite well. Shocking bad on a horse."