Read The Count of the Sahara Online

The Count of the Sahara 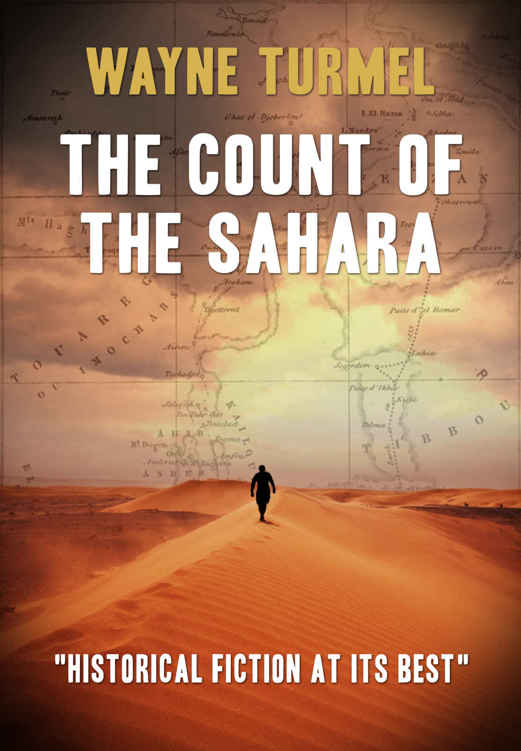 THE COUNT OF THE SAHARA

The Commandant stuck the tip of his little finger in the bullet hole and spit a curse between his teeth. “C’est des conneries.” It was, indeed, bullshit. In the old days, the Tuaregs would stage a raid, wave a few swords, put the fear of God into the locals, and disappear back into the desert. Now they had rifles and a disturbing lack of respect for French authority.

Commandant Beaumont examined the hole in the fender of the truck and its twin punched into the door panel. Another couple of years, he thought, and they’ll learn how to use them. Then the real trouble will start.

Squinting into the sun, he saw the culprit waving his rifle in the air and shouting his war cry. It never seemed to occur to these idiots that if they were close enough to shoot at the Legion troops, they could shoot back.

“Should I?” asked a fat Belgian sergeant. The muzzle of his rifle lay flat against the hood and he had a clear shot, clearly itching to take it. A six foot man in bright blue robes and a foot-high turban atop a seven foot camel made an awfully tempting, and almost un-missable, target.

“Hell, no. You’ll probably hit the camel, then we’re really screwed. Just let him do his little dance and go home.”

That’s what this job had come down to. If you killed a man out in the desert, no one said much of anything—it was the natural order of things. Kill a camel, though, and you have to listen to the bureaucrats and the local tribesmen and their women wailing and whining until you ended up paying reparations to the very people trying to kill you. It might be tempting to teach the idiot a lesson by making him trudge home in the sand and heat, but it wasn’t worth the aggravation or the paperwork.

Commandant Count Henri de Beaumont allowed himself a moment of nostalgia for the days when the Foreign Legion could do its job like men, instead of pansy shop clerks, then sighed and barked out, “The show’s over. Let’s get back”.

His men were spoiling for a fight, and he heard them grumble as they climbed aboard the two vehicles. Complaining was one of the few rights Legionnaires were free to exercise, as long as it didn’t reach the level of true insubordination. He was tired of these nuisance raids, too, but that’s all they were, just a flea bite. Let them gripe.

His head hurt, and he laid it back against the seat in hope of catching a nap on the way back to the fort. The young driver, a skinny, almost toothless private named Lemonde, wasn’t about to let that happen.

“Monsieur le Commandant, can I ask you something?”

“Why stir up trouble now? Things have been pretty quiet for a while. Is it the Communists?”

Beaumont chuckled. The idea of King Akhamouk believing anyone the equal of a Tuareg, let alone sharing anything with others, was ludicrous. There was no danger of the Red Menace extending this far into the Sahara. “No. It was the Americans.”

“Grave robbing, mostly. But they managed to piss off every tribe, Arab and inbred Pied-Noir between here and Algiers.”

“So why are they shooting at us?”

“Who else?” Beaumont’s shrug ended the conversation.

Lemonde slowed the car to twenty as they approached the village of Abalessa. Then he dropped to ten as he saw the herd of scrawny, scabby goats in the middle of the road. Hoping he wouldn’t have to come to a complete halt before the goats got out of the way, he let out a long blast of the horn. The animals just stopped in their tracks and looked up, annoyed at the soldiers’ impertinence.

Beaumont looked around him, bored. There was nothing special about this collection of dry brown huts and sullen dark faces. Like so many other villages in this part of Algeria, Abalessa was made up of share croppers; the descendants of slaves captured in blacker parts of Africa. Now they worked their own mostly useless land, paying a percentage to the Tuareg King and considerably less to the legal Algerian authorities. In many ways their status hadn’t changed one iota, although everyone seemed happy enough to pretend the tribute was now simply a condition of employment, and not actually indentured servitude.

He sat up straighter as Lemonde ground the car to a stop. He could hear the rumbling engine of the troop transport behind them, but not much else. Usually at this time of day it was mostly women and children in the village. The men should have been out hunting or inside the huts drinking and smoking, rather than out in the sun. As a rule, the soldiers were greeted with mild interest when they passed through places like this. Today, though, Beaumont saw something too much like defiance in their eyes.

Two long, slow, baritone blasts on the horn failed to scatter the livestock. “Goddammit.” Lemonde wrenched on the door handle and stepped out of the truck.

“Private, stop right there.” Lemonde froze where he was, with one boot still on the running board.

The commandant winced as doors slammed behind him. The second truck was already emptying out. He slid over to the driver’s side and leaned out the door to see half a dozen soldiers with rifles at the ready.

“Back in your vehicle. There’s no problem,” he shouted. The men, led by the fat Belgian sergeant, hesitated for the briefest moment, then reluctantly turned back to their truck. Looking back only a moment to ensure obedience, Beaumont glared at Lemonde. “Get your ass in here.”

The soldier shot the goats and their owner one last dirty look. From behind the crowd, Beaumont thought he heard a faint shout.

Lemonde must have heard it too. As the young private looked behind him, his eyes suddenly darted upwards and a jagged stone bounced off the side of his head. He fell to his knees in the dust next to his blood-stained kepi.

Beaumont heard the screaming of women and the angry roars of soldiers erupt around him as he climbed down from the vehicle to check on Lemonde. The skinny soldier was already rising and dusting himself off, oblivious to the blood streaming down his temple.

Beaumont nodded, but grabbed the young man by the chin and took inventory. Dust and sand mixed with blood in a muddy brown mess, but it wasn’t gushing. Lemonde’s eyes were as clear as they ever were, and he had as few teeth as he started with. He’d be okay.

The commandant turned his attention to the rest of his men. Five of them stood in a semi-circle, guns waving back and forth at the assembled villagers. He didn’t see the sergeant, Baldewijns. Where was that fat, Flemish bastard?

“Monsieur le Commandant”, came a shout from forty meters away, “I’ve got him.”

The soldier stood next to a reed-thin boy of no more than twelve who thrashed like a fish on a line. The lad broke free for a moment, but the older soldier reached out with a his ham-sized hand and, not having a shirt to grab onto, wrapped his fist in the boy’s black hair until there was a single yelp, and no more resistance.

Beaumont waved him over, then took a close look at the black faces surrounding him. Most showed surprise, a few appeared legitimately horrified. Only a handful of men actually looked angry and that was probably aimed as much at the little troublemaker as the Legionnaires. This wasn’t an insurrection; it was just a kid playing big-shot. That was easier to deal with.

Huffing and sweaty, Sergeant Baldewijns brought the rock thrower to his commander. He curled his fist to tighten his grip on the young man’s hair and pulled him to his knees. “Stay there, you little bastard.”

The young African knelt in the dust, trying to lock eyes with Beaumont in a warrior’s death stare, but his defiance was too mixed with fear to be convincing, and his gaze finally dropped to the ground in front of him. Something—tears or snot or both—made coin-sized wet patches in the sand.

“If you want to fight soldiers, you have to act like a man.” Baldewijns swung the butt of his rifle into the back of the kid’s head.

From behind him, a woman wailed. Beaumont turned to see an emaciated figure, likely the mother, sobbing into the shoulder of another, older female. A tall, grey-haired man stood next to her with his arms crossed. He gave her a withering look that shut her up, then returned his gaze to the Legionnaire.

Beaumont addressed the crowd in French, knowing that only a handful of people would understand him, but hopeful the village chief was among that number. “You saw, he attacked us unprovoked. He has to come with us.” He locked eyes with the older man. “Yes?”

The boy’s mother began another round of wailing, eliciting sympathetic murmurs from the other women. The chief said nothing for a moment, and then gave a single, silent nod.

“Bring him with us,” Beaumont told the Sergeant. Baldewijns gave an ugly sneering smile.

“Get up, scum.” Taking the skinny youngster by the neck with his meaty hands he turned towards the troop truck. With a shove, he bounced the boy off the rear fender of the Commandant’s car, then led him towards the half dozen or so grinning soldiers waiting there.

“Baldewijns, he can come with us in the car.” The fat soldier hesitated only a disappointed moment before leading his charge back to the commandant. His eyes challenged the officer but he obeyed and took two steps back.

Beaumont opened the rear door and pointed. The lad hung his head, took a brief look back to his mother, and climbed inside without another word. The heavy door slammed behind him.

“Are you okay, Lemonde?”

The soldier nodded unconvincingly. Beaumont ordered him back to the truck with the others, and called for another driver. Then he climbed in his own side of the vehicle, his eyes continually scanning the crowd for more trouble, but gratefully saw nothing worth worrying about.

“Let’s get out of here. But pull out slowly,” he ordered the driver.

As they pulled away, Beaumont stole a glance over at the sniffing, huddled youngster rocking silently in the back seat. On top of everything else, now he had to figure out what to do with this rock throwing brat that wouldn’t make things worse.

Brooding silently most of the way back to the fort at In Salah, he thought about what a complete cockup this had become. Who could have known? The Americans seemed harmless enough, but in a few short weeks they’d left a trail of chaos and damage no sandstorm could match. The tribes were dangerously unruly again. Every week new creditors crawled out of the dunes demanding satisfaction. The regional authorities, always a boil on his ass, would be even whinier and more demanding, if that were even possible.

In his mind’s eye, he saw the face of the expedition’s leader. If he ever met the arrogant son of a bitch again, he’d wipe that smug grin right off his face. What was his name? It was the Count something or other. Then he remembered.

Canyons Of Night by Castle, Jayne
Fire Storm by Shields, Ally
Best Of Everything by R.E. Blake, Russell Blake
Danger Guys on Ice by Tony Abbott
Adland by Mark Tungate
After the Storm by Maya Banks
Lie to Me (Sexual Misconduct Volume III) by Bethany Bazile
ExtremeCouponing by Sabrina York
My Year in No Man's Bay by Peter Handke
Rock Chick 03 Redemption by Kristen Ashley
Our partner