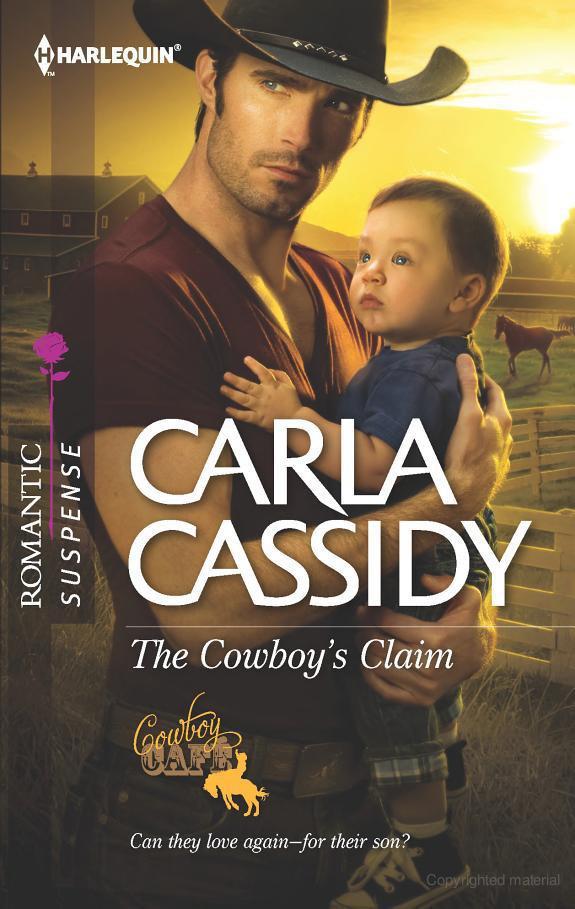 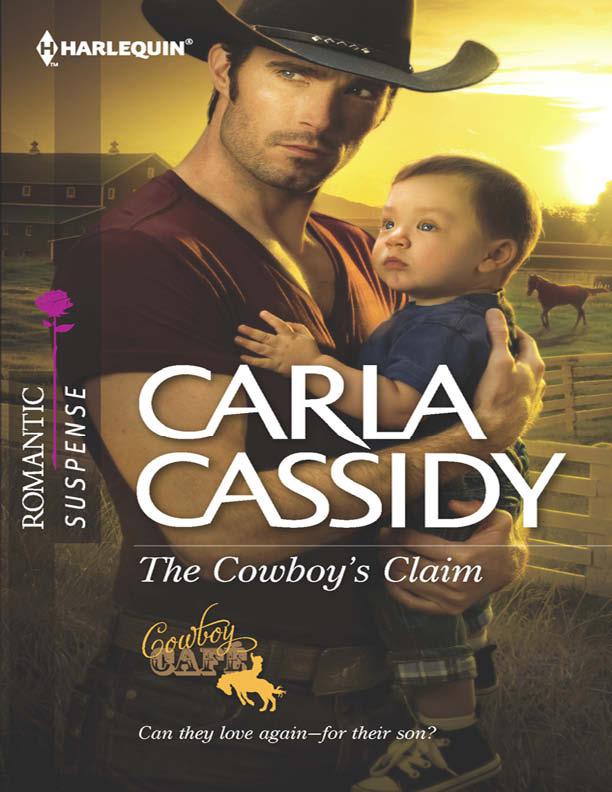 He wants his baby, she wants him gone.

No self-respecting cowboy wants to be a rich girl’s dirty little secret. That’s why Nick Benson left Grady Gulch, looking for greener pastures even as his heart was breaking. Little did he know that the beauty he left behind was carrying his child, a son. Or that his wealthy lover would be abandoned by her family because of their forbidden affair.

Now Nick has returned, and he wants to be a father to little Garrett. But Courtney Chambers has been taking care of herself long enough to distrust their renewed passion. Her little boy is her life now. Only when he disappears, does she realize how dangerous love can be....

She was so over him.

She’d moved on and he had no place in her heart, in her life. He deserved nothing from her but the plate of food she slid down in front of him along with the glass of milk and the edge of contempt that welled up inside her. So why, oh why, after everything that had happened did her heart still lurch more than a little bit at the sight of his thick dark hair, his chiseled features and those amazing blue eyes?

She started to leave the table, but gasped in surprise as he grabbed her by the wrist to stop her escape…

There is nothing more pure than a mother’s love, and sometimes that love requires sacrifices. In
The Cowboy’s Claim,
my heroine, Courtney, comes face-to-face with the man who fathered her child, a man she believes abandoned her—and the hot, handsome cowboy wants to be an active participant in his son’s life.

Sometimes as a mother we have to make choices that are difficult for us but are best for the child. I hate when that happens! Still, as Courtney chooses to do the right thing, she not only stirs up an old passion, but also a danger she’d never expected.

I hope you enjoy this book about reunion, and I hope I scare you just a little bit with the suspense.

As always, thanks for your support and keep reading!

Other titles by this author available in ebook format.

is an award-winning author who has written more than one hundred books for Harlequin Books. In 1995 she won Best Silhouette Romance from
RT Book Reviews
for
Anything for Danny.
In 1998 she also won a Career Achievement Award for Best Innovative Series from
RT Book Reviews.

Carla believes the only thing better than curling up with a good book to read is sitting down at the computer with a good story to write. She’s looking forward to writing many more books and bringing hours of pleasure to readers.

N
ick Benson tightened his grip on the steering wheel and fought against a press of anxiety as the road sign ahead read: Grady Gulch—5 Miles.

A man wasn’t supposed to feel this way when he was returning home after a two-year absence. He should be excited to connect with old friends and family, but instead each mile that took him closer to his hometown knotted the ball of anxiety in his belly tighter.

He hadn’t wanted to come back to Grady Gulch, Oklahoma. In the past two years, he’d begun to slowly build a new life working as a ranch hand on an old friend’s place in Texas.

Home had once been a happy place. Even though the Benson siblings had lost their parents at an early age, Nick’s eldest brother, Sam, had managed not only to keep the family ranch prosperous, but he’d also kept them together as a unit. Now all of that had changed. His sister was dead, his oldest brother was in jail and his other brother had fallen into the bottom of a bottle of booze.

His hands slowly unclenched from the steering wheel as in the distance he saw the massive billboard cowboy that topped the low, flat building of the Cowboy Café.

The café had been as much a part of Nick’s life as his brothers and sister had been. On impulse, as he reached the eating establishment he pulled into the parking lot, deciding that at least he could enjoy a home-cooked meal before driving on to the family ranch and beginning to deal with the difficult issues that awaited him there.

It was just after one in the afternoon, and he’d been on the road since early morning. He’d stopped at a convenience store along the way for soda and a bag of chips, but that was all he’d eaten since leaving Texas just after dawn that morning. As he found a parking space in the lot, his stomach gave a loud rumble of anticipation.

He turned off his engine and looked at the building for a moment, remembering all the good times he and his sister and brothers had shared here. It wasn’t unusual for the four of them to eat dinner together here at least twice a week.

Sam, the eldest and the most serious, played the role of parent, insisting that each of them order a side of vegetables to go with whatever else they had ordered. Adam emulated Sam, wanting to be just like the brother who was two years older than him. Meanwhile, Cherry was the one who would unscrew the top of the salt shaker just before Nick would salt his fries. She would sneak pickles off her brothers’ plates and flirt shamelessly with any cowboy who walked in. By the time the meal was over, they were all laughing together. Then had come the car accident, and the laughter had died.

Cherry was gone forever, but Nick had spent the past two years of his life trying to forget the other woman, and there were times in those two years he’d actually thought he’d been successful.

He finally got out of the truck and stretched with arms overhead to unkink the muscle knots that had claimed his body from hours behind the wheel. The scent of onions frying, potatoes and savory sauces filled the air, and his stomach rumbled with a new pang of hunger. Definitely time to fuel up. He had a feeling he was going to need all the strength he could muster to deal with whatever awaited him at the family ranch.

He knew that by walking into the café he’d probably be feeding the gossipmongers, but it wouldn’t be the first time and it probably wouldn’t be the last. Besides, might as well get it over with now, let people know he was back in town. By going inside the Cowboy Café, the word would shoot around Grady Gulch with the speed of a bullet.

As he walked into the restaurant, a little bell tinkled and he swept his black cowboy hat off his head, assuming the owner, Mary Mathis, still had her no-hats-while-eating rule in place.

Sure enough, as he looked at the wall next to the door, he saw an array of cowboy hats hanging from hooks, and he added his own to the unusual décor.

It was just late enough that the lunch rush was gone and there were only half a dozen people lingering either at the tables or at the long, polished counter.

As he made his way across the room to a booth on the other side, he was aware of several gazes following his progress. He slid into the booth and looked at the counter, where a waitress he’d never seen before poured coffee for one of the two men seated there.

He recognized one of the older men as George Wilton, the town’s resident curmudgeon. George had probably been sitting at the counter since early morning, drinking coffee and complaining about anything and everything that crossed his mind. Some things never changed.

He smiled as he saw a familiar pretty blonde hurrying toward him. “Nick Benson! Well, aren’t you a sight for sore eyes,” Mary Mathis exclaimed.

Nick smiled at the woman who had owned the café for the past five years. “Yeah, I figured it was time I get back here and take care of some business. But before heading to the ranch, I thought I’d fill my belly with some of your food and maybe a piece of your famous pie. Sounds like I’m going to need all the strength I can muster,” he said.

Mary’s smile turned sympathetic. “I’m so sorry for your troubles, Nick. But, there’s no question that Adam needs your help right now. The whole incident with Sam has nearly destroyed him. Rumor has it Adam is spending most of his time at The Corral, drinking himself into oblivion each night. He comes in here every once in a while looking like a broken, very hungover man.”

“That’s why I decided it was time to come home,” Nick replied. “I could tell by the phone calls I was getting from him that things were definitely reaching a crisis point.” He frowned as he thought of his older brother, who had in the past couple of weeks called him day and night, drunker than a skunk and begging him to come home.