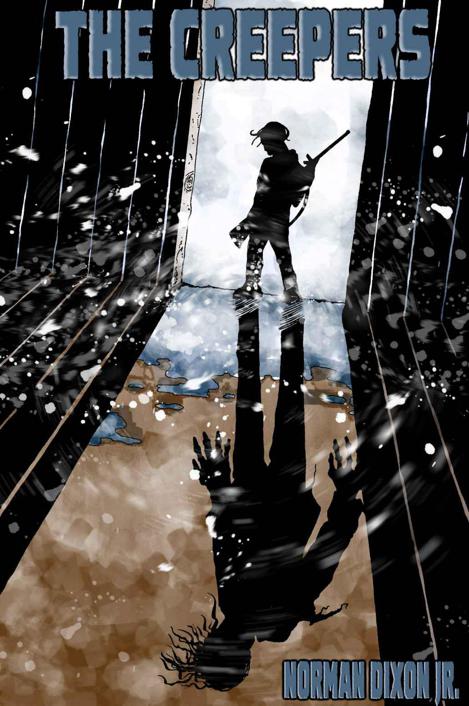 To Jeanette
always and still

“Come on, Bobby, I got something to show
ya."

Ryan ducked under the rusting fence. He
wriggled his way past the crude spikes and razor wire, stopping once to relieve
his shirt from a snag. He bounced up on the other side, grinning wide. “See?
Nothing to be afraid of. Nothing at all." He waved wildly at his brother.

Bobby froze. He looked back at the
Settlement. Silhouettes of workers moved along the crest of the hill, finishing
the day’s work on the farm. The guard tower poked the sky, a dark finger. It
would be empty, briefly, for a shift change this time of day. “But we’re not
supposed to be out there with the Creepers, Ryan. The Folks will be mad,” his
voice quivered. In the light of the setting sun he looked even younger than his
thirteen winters. Tears of doubt and embarrassment welled in his eyes.

Bobby balled his fists, pounded his
thighs, took a deep breath, and made his way under the fence. His sandy,
shoulder length curls forcing him to pause every few inches as they caught in
the razor-wire. The smell of sweet grass fresh in his nostrils, he made it to
the other side.

Ryan slapped him on the back. “See,
feels good doesn’t it?”

Bobby flinched at the word. He had heard
it before, on the fields, spoken in anger by the older boys as they tilled the
soil on a hot day. He never used it. The Folks simply would not stand for it.
They made little Terry Miller work latrine duty for three months, and he didn’t
even get the whole word out.

“But, nothing." Ryan turned to the
old, weeded over Still Water Road. It snaked down the right side of the
mountain, dangerously steep. He stood on his tippy-toes and shielded his eyes
from the sun. “You see that . . . in the old fields?" Ryan pointed off
into the distance.

Bobby strained to follow Ryan’s finger
to the horizon. He couldn’t see anything . . . nothing at all. Then he did,
just barely, shapes moving through the wildly growing fields, black blotches
like the videos of animals in those old nature discs the Folks played in
science class. Big shapes, vaguely human, hard to make out—but moving,
foraging, hunting. Bobby swallowed hard.

It was then, as Ryan skipped ahead,
throwing rocks over the edge of the road, that Bobby realized this was the
furthest he had ever been from the Settlement. He’d been further when he was an
infant, but he didn’t count that journey, because he could not remember it. He
looked back to the razor-wire fence, wishing silently he hadn’t followed Ryan.
But at the same time, he couldn’t resist the temptation of breaking the rules.
He was, after all, an outsider.

“Check this out, Bobby." Ryan knelt
at the side of the road beside a rusted out Ford pickup. He pulled the
driver-side door open with a grunting effort.

Bobby leaned over his shoulder. The
driver’s skull looked at him, gleaming white and empty-eyed from the center
console. He didn’t flinch, he didn’t run; he wasn’t afraid, he’d seen it all
before. Death was nothing new . . . he’d seen worse. It wasn’t the dead-dead
that you had to worry about. It was the Creepers you had to look out for, the
Creepers you had to be afraid of. That was the first lesson the Folks taught
them.

The lesson was always at the forefront
of Bobby’s consciousness, etched in the gray matter till death. He’d never
forget it. How could he? The day of the lesson, now four years removed, played
out every night in moments of waking terror, of piss and sweat-soaked sheets.
The other boys teased him about it, laughed at him, but they hadn’t been that
close to a Creeper, not a single one of them. They didn’t smell the fetid
breath, the wretched stink of decay. They’d never felt those hard fingers
gripping their flesh. Never heard the yellowed-teeth clack, not a single one of
them.

Bobby found his memories too intense to
stop. He was back in the school yard. It was a cold December day. Steely-gray
clouds, like ocean liners, drifted towards them, belching the first real snow
fall of winter. The fifteen boys stood in a circle around the old flagpole. The
tattered red, white and blue had been removed earlier that day in a ceremony.
Ol’ Randy played something called
Taps
on his battered bugle. The flag
and rope had been replaced by a long chain. At the end of the chain, a thick
iron collar, and clasped tightly inside that collar, a neck, the rotting,
flesh-torn neck of Bobby’s first lesson: a Creeper.

The boys shook from the cold, and from
fear, some even wet themselves, but not Bobby, he was too curious to be afraid.

Their teacher, the oldest of the Folks,
Ol’ Randy, stood to the left of the Creeper. His dark denim overalls did their
best to hide to the stains of dried blood from the slaughterhouse. Ol’ Randy
stood well over six feet tall. His gray hair hung to the middle of his back and
it was flecked with blood and bits of gristle. He held his trademark
sledgehammer, Tilda, in his massive, arthritic-knuckled hands. His face was
marked by a baseball-sized dent just under his right eye. The boys joked that
he slept with Tilda once too often, caressing her steel head on many a lonely
night. None of them would say this to his face. Truth is, nobody; not the boys,
not the other Folks and maybe, just maybe, not even Tilda knew how Ol’ Randy
came to bear the mark. Bobby suspected Ol’ Randy came by it in the First War.

Decades removed from the First War, Ol’
Randy stood before them, measuring them, eyeing them, meeting each gaze,
forcing them to look away, but not Bobby.

“So, not afraid, little Bobby
Carroll?" Ol’ Randy slapped Tilda’s head in his palm. He grinned, a broken
smile like a rundown picket fence in need of repair. “Not afraid at all?”

Bobby straightened himself like they
taught him; arms crossed, shoulders straight, feet spread evenly apart, chin
up, chin up boy . . . chin up. “No, sir.”

Bobby strode with confidence, but after
the day was out, Bobby would never be the same. He’d no longer walk tall, no
longer look anyone in the eye. No, at the end of the day Bobby Carroll would be
the little boy he was meant to be. They all would, but Bobby most of all. That
was the point of the first lesson. It was more of a reality check than an
introduction. Bobby stopped two paces from Ol’ Randy and the Creeper.

He could smell it now as the wind
stilled briefly. His stomach rolled. The lunch of fresh bread and vegetables rose
in the back of his throat. He swallowed, forcing the raw beets and bile down.
The Creeper wore a brand new orange jumpsuit, making it an easy target for the
guards in the tower—every precaution had to be taken on introduction day.

Bobby studied it. The Creeper’s exposed
flesh was cut in places, and a swarm of bloated black flies buzzed around its
head. The insects crawled in and out of its mouth and nostrils, but the Creeper
did not care. Its shaggy black hair hung over its face,
obscuring its milky eyeballs like a dirty, greasy stage curtain. The
Creeper moaned, begging for flesh while its useless tongue hung limply, a mound
of rot incapable of coherent speech. It was said that no thoughts ran through
their rotting minds, though, that was before they decimated the world.
Something ticked in there, a driving force—a
purpose.
The foul smelling
skin shone a dull brown like the belly of a cricket. Bobby was not afraid.

The Creeper strained against the chain,
clack
,
trying to reach Bobby. Ol’ Randy hit it in the gut with Tilda. The Creeper
slumped forward, moaned louder.

“Shut up ya’ puss bucket." After
another blow from Tilda, the moans died off. “That’s better." Ol’ Randy
spit a shiny black wad of chew at Bobby’s feet. “Now, little man, and th’rest
o’you boys,” he waved Tilda to include them all, “this’n here be a Creeper.”

Bobby stared into the Creeper’s vacant
gray-white eyes. He wondered what the last thing it ever saw was. Did it see
the rotten teeth of another descending onto its neck? Or did it see the ceiling
of a room as it waited for its first death, feeling the Fection spread? Bobby
would never know. That’s just how the world functioned. There was a lot of not
knowing, and people just dealt with it.

A stone smashed into the Creeper’s
forehead, splitting the dead flesh and cracking the skull beneath. The Creeper
rocked back and forth, arms stretched towards Bobby and the other boys, but the
chain kept it in check. The boys snickered and another stone busted its lip
wide open. There was no blood:
only maggoty,
sun-dried skin parting.

“Quit that laughing . . . this lesson’ll
save your life one day. Now pay ‘tention!" Ol’ Randy slapped its hands
aside and gripped its lower jaw in his powerful hands. He held it firm like an
old movie villain taunting the hero’s woman. The jaw cracked from the pressure
and its graying putrescent tongue lolled over its busted lip. Ol’ Randy looked
like a prize fighter with the big black glove on, but protection was necessary.

“Listen well, boys, listen well. Never,
ever want that Creeper juice on ya. No sir, be wary for the Creeper juice. It’s
the main source of the Fection. Ya get it on ya and well, you end up limbless
like Ted, or worse." Ol’ Randy pushed the dead thing away with the butt of
his hammer. “Who here knows ‘bout the Fection?”

Ol’ Randy looked past him.

None of the other boys volunteered.

Ol’ Randy shook his head. “Well, little
Bobby, Mr. Superstar that everyone loves to hate." He spit another wad.
“Always comes back to you. You other boys listen, and listen good, ya hear? You
can’t go through life havin’ someun else do ya work for ya. Little Bobby here
been the star pupil." He looked Bobby dead in the eye. “I been payin’
tention see. This ya’s first lesson wit me, but I been payin tention. You don’t
wanna answer for yaselves, well then I’m-a let Bobby answer. Go ahead, son.”

Bobby swallowed. He didn’t like the
gleam in Ol’ Randy’s eyes, it spoke of something off, something
not-quite-right. It
smacked of wrong. But he had
to speak up. After all, when one of the Folks asked you a question,
you answered—simple as that. There were punishments
for being silent. No individual thoughts, they could be dangerous. He readied
himself to answer.

“The Fection is a disease, sir.”

“Tell me sumtin’ I don’t know,
superstar." He nudged the Creeper aside.

“We don’t know how it started—”

“It’s a disease spread through contact,
from bites mostly, but if you just touch the juice you get it. That’s why so
many from the First Wars are missing parts. They had to cut them off to keep
the Fection from spreading." Bobby shuddered as he remembered the pictures
of the field hospitals: the piles of limbs on fire, the wounded, the blood, and
the sheer enormity of it all.

Hot Mahogany by Stuart Woods
The Andreou Marriage Arrangement by Helen Bianchin
White Bread by Aaron Bobrow-Strain
Polar Bared by Eve Langlais
Crush Control by Jennifer Jabaley
Wanting What You Get by Mila
Storm of Desire by Cara Marsi, Laura Kelly, Sandra Edwards
All Things Pretty by M. Leighton
Home Is Where My People Are: The Roads That Lead Us to Where We Belong by Sophie Hudson
Shadows In the Jungle by Larry Alexander
Our partner