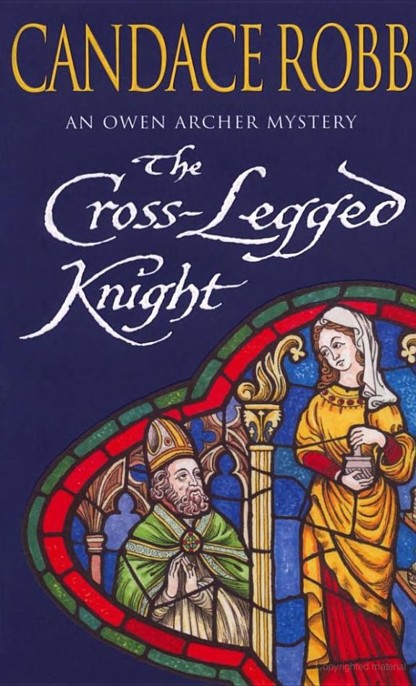 Published by Arrow Books in 2002

Candace Robb has asserted her right under the Copyright, Designs and Patents Act, 1988 to be identified as the author of this work

2. A Fire in Petergate

‘Ellis Peters has a cohort of pretenders snapping at her heels … most impressive of the bunch is Candace Robb. A definite tip for tomorrow.’
Time Out

‘Robb deftly interweaves a complex story of love, passion and murder into the troubled and tangled fabric of Welsh history, fashioning a rich and satisfying novel’
Publishers Weekly

‘Hugely, but subtly, detailed … complex, ambiguous and gripping. The resolution had me guessing almost to the very end’
Historical Novels Review

Candace Robb studied for a Ph.D. in Medieval and Anglo-Saxon literature and has continued to read and research medieval history and literature ever since. The Owen Archer series grew out of a fascination with the city of York and the tumultuous 14th century; the first in the series,
The Apothecary Rose
, was published in 1994, at which point she began to write full-time. In addition to the UK, Australia, New Zealand, South Africa, Canada and America, her novels are published in France, Germany, Spain, Denmark, Italy and Holland, and she is also available in the UK on audiobook and in large print.

In addition to the Owen Archer novels, she is the author of three Margaret Kerr Mysteries, set in Scotland at the time of Robert the Bruce.

The Cross-Legged Knight
is the eighth Owen Archer novel.

THE RIDDLE OF ST LEONARD’S

A GIFT OF SANCTUARY

A SPY FOR THE REDEEMER

THE GUILT OF INNOCENTS

A VIGIL OF SPIES

THE FIRE IN THE FLINT

I am indebted to Ed Robb for bringing to bear his 35 years of expertise in research at Shriners Children’s Hospital, a pediatric hospital for burns, in answering my many questions about burns and the healing methods available to Magda Digby; to Charlie Robb for all his support, particularly in mapping the city of York, describing the archbishop’s palace, and brainstorming on the plot; to Lynne Drew, Sara Ann Freed, Evan Marshall, and Patrick Walsh for patience and sympathetic support during a difficult year; to Joyce Gibb, Laura Hodges, and my generous colleagues on Chaucernet, Medfem, and Mediev-1 for advice and comraderie throughout this project; and to Jacqui, Mark, Nathaniel and Emily Weberding for their boundless love and compassion. 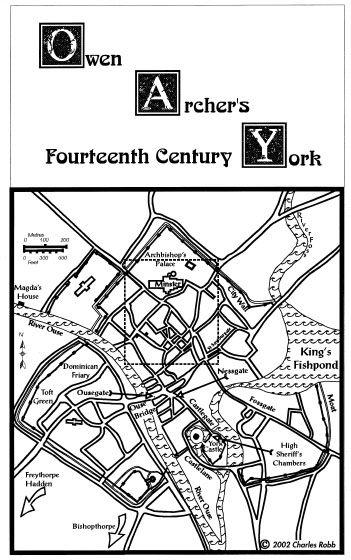 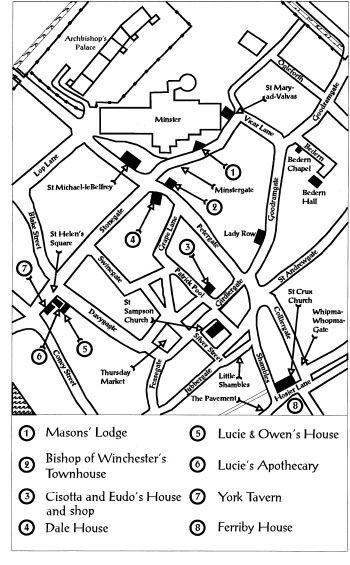 W
illiam of Wykeham, Bishop of Winchester and late Lord Chancellor of England, sat in the mottled shade of Archbishop Thoresby’s rose arbour wiping his irritated eyes and cursing all that had brought him riding to York four days ago. The horses’ hooves had stirred up summer’s dust and the mould from the autumn leaves. He and his entourage had ridden with cloths covering their faces from their chins to the bridges of their noses. Wykeham might have pampered himself within the curtains of a litter, but he had not wished anyone to misconstrue such a nicety, spread word that he had hidden from the curious along the way, or, worse yet, that he was ill, weak. So he had ridden north on the King’s Highway with his men, regretting that the rains of autumn had held off for his journey to York.

They had stopped frequently and broken their journey early in the evenings. Wykeham would have preferred a brisker pace, but now that the chain of lord chancellor no longer weighed down his neck, he did not push his men, for they, too, as his household, had lost
stature this past year. It was not as fine to be the household officers of the Bishop of Winchester as it had been to be the officers of the lord chancellor of the realm. Wykeham wanted them content. His enemies would be only too happy to make alliances with his staff.

He had used the time to pick at his wounded dignity. God knew he could have found better occupation for his hours in the saddle, but he was weak, too proud, he knew that of himself.

Their small wagon had creaked and groaned over the ruts in the road, its cargo the heart of a York knight who had gone in his dotage to France as a spy and had been caught and imprisoned, dying there while Wykeham was negotiating his ransom. The Pagnell family were making much of what they considered Wykeham’s failure, though he was of the opinion that Sir Ranulf Pagnell had simply been a foolish old man. However, as the family was influential in Lancastrian circles Wykeham had tried to appease them by escorting Sir Ranulf’s remains to York, the heart that he had coaxed from the French king with his own money. The Pagnells did not think even this sufficient retribution. For all his efforts, Wykeham was not to preside at the knight’s requiem. Indeed, he had not even been invited to attend.

As Wykeham sat in the archbishop’s garden, miserable in his self-pity, a shadow fell across him and the scent of lavender drew him from his thoughts. He squinted up, his eyes watering in the light. Brother Michaelo, the archbishop’s elegant secretary, stood before him.

Wykeham assumed the monk had come to deliver a message. ‘What news from Lady Pagnell?’

Michaelo bowed his head slightly. ‘The lady sends
her apologies, but she cannot meet with you until her departed husband’s month’s mind.’

Wykeham bristled. ‘How can there be a one-month mass for Sir Ranulf when we know not the date of his death?’

Lady Pagnell and her son and heir, Stephen, were being guided in this shunning of him by their Lancastrian friends, Wykeham was sure of it. But to press her would merely inspire accusations of cruelty to the widow in her mourning. He could ill afford to make himself more unpopular in the city than he already was.

Brother Michaelo held up to him a glass vial. ‘If I might suggest, My Lord Bishop, a soothing wash for your eyes? This is from Captain Archer’s wife. She is as skilled as any apothecary you might have in Winchester.’

Wykeham grunted. ‘I am in your debt. Take it to my servant. I shall try it later.’

‘I could assist you in applying a few drops now, My Lord Bishop.’