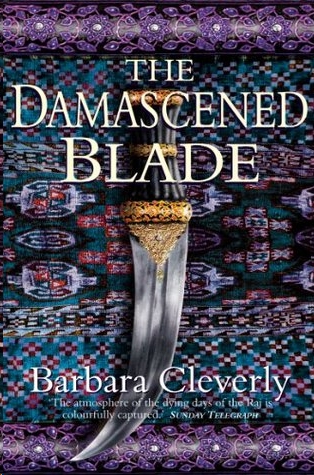 BARBARA CLEVERLY
was born in the north of England and is a graduate of Durham University. She now lives in the middle of Cambridge.

The Palace Tiger
is her fourth Joe Sandilands novel; her first,
The Last Kashmiri Rose
, was named by the
New York Times
as a ‘notable book of 2002’. To find out more about the series, visit the website
www.barbaracleverly.com
.

Praise for
The Damascened Blade

‘(
The Damascened Blade
) combines attention to colourful historical detail with a modern rendition of the classical mystery novel.’

‘American heiresses, handsome Afghan tribesmen – they are all here in spades. A great blood and guts block-buster.’

First published in the UK by Constable,
an imprint of Constable & Robinson Ltd 2003

This paperback edition published by Robinson,
an imprint of Constable & Robinson Ltd, 2004

The right of Barbara Cleverly to be identified as the author of this work has been identified by her in accordance with the Copyright, Designs and Patents Act, 1988

All rights reserved. This book is sold subject to the condition that it shall not, by way of trade or otherwise, be lent, re-sold, hired out or otherwise circulated in any form of binding or cover other than that in which it is published and without a similar condition being imposed on the subsequent purchaser.

Coming to the end of this novel, in August 2001, I wondered how many readers would be familiar with the setting – the North-West Frontier Province of the Indian Empire – or even its neighbour, Afghanistan. How many had heard of its fiercely independent inhabitants, the Pathan? Sadly, after the events in New York and the subsequent tracking down of suspected terrorists to Afghanistan, our television screens are filled with stark images: bleak khaki hills, precipitous mountain passes, bearded and hawk-like faces shouting defiance, sinewy hands clutching Kalashnikovs, and with foreboding I read again Disraeli’s judgement: ‘The soil is barren and unproductive. The country is intersected by stupendous mountains where an army must be exposed to absolute annihilation. The people are proverbially faithless.’

And I fear that coming events may once again prove the truth of this. Alexander the Great, the Moghul emperors, the Sikhs, the British, the Russians have all left graves behind in these hills. Is it about to happen again? But then another quotation comes to mind. The Indian Viceroy, Lord Curzon, in 1904 said: ‘No man who has read a page of Indian history will ever prophesy about the frontier.’

Prophesy? I wouldn’t dare. But this story may well conjure up something of the character of the land and its people which seem to me to remain unchanged through the centuries.

‘This isn’t human country! It was never meant that anyone should be here, stand, sit or walk here. This isn’t country worth fighting for. Leave it to bake in the summer, freeze in the winter; leave it to bury its dead or not even to bury its dead – leave them to bleach away to nothing in the sun. What did Bismarck say? “Not worth the good bones of one Pomeranian grenadier.” He was thinking of the Balkans or some other God-forsaken part of Europe but it’s even more true of this part of India. The North-West bloody Frontier! Not worth the bones of a single gallant native Scout. Not worth the bones of a Sandhurst-trained British officer.
My
bones! A subaltern, who has – dammit – only been in this foul oven for two weeks.’

The serrated and crumbling mountains, grey with hideous old age, black with seams of basalt, were empty, sterile and useless. Empty? Not quite. In the middle distance a lonely signal flag was frantically wagging. All the watching officers turned their binoculars on this. Someone read it off.
Under attack. Carrying wounded. Three dead. Can you help?

‘Now send,
Abandon the dead
.’ The signal flag swished again at his side. ‘And add,
Don’t abandon wounded
.’

Paddy Brownlow out there commanding the beleaguered patrol would know how to translate that – ‘Bring them in if you can – shoot them if you can’t.’ Any British officer falling into the hands of the Afridi would, without question, be tortured to death. A process which would generally be extended to cover two full days especially if the women came down to join in the fun, and the same fate awaited any Hindu soldiery who might have the bad luck to fall into enemy hands.

‘In that case, Neil, send
Retreat
and open covering fire on the ridge . . . now!’

The three twin Lewis guns burst into a wild and deafening rattle of sound. Chips of stone began to fly and whine away from the ridge. Surely nothing could live in that?

The little temple, derisively designated ‘the Tit’ by the British, stood half-way between the relieving force and the retreating men. A swelling dome surmounted by a blunt pinnacle, it was aptly named. The Colonel was only reasonably confident. Out there were thirty men carrying wounded under fire, doubtless running short of water, exhausted by three days in action with half a mile of country to cover and only the fragile support of his advancing relief force. But at least they’d picked up his signal and the scrambling retreat had started. Had started according to a well-worn formula: a practised leap-frog, one unit to lay back and give covering fire while another passed back through them to lay back in its turn. Orderly. Safe. Well-tried.

The Colonel turned to Neil. ‘Take over here, Neil, will you? I’m going in with the chaps. Just for once.’ His eye lighted on the young subaltern standing by. ‘You, Jock? Want to get a closer look at the Afridi? Come on then!’

At the double, the relieving force spread out across the naked hills under the cover of the three Lewis guns. Neil watched them with agonized pride. This was where months of practice bore fruit. How many times had they in the familiar hills around the fort attacked, defended and retreated from various familiar features? Here, though, was grim reality.

The two forces met in the shadow of the Tit. Seamed and cracked, shattered indeed by a hundred baking summers and a hundred frozen winters, little of the Tit but its dome remained to suggest that this once had been the peaceful abode of God in these hills. What must once have been a placid statement now provided at least a sketchy shelter for the relieving force to combine with the desperate patrol.

After a little congratulatory back-slapping and sighs of relief as the two units mingled, a careful roll was called. ‘Let’s enter up the scoreboard,’ said the Colonel. ‘Let’s make sure who’s here and who isn’t before we move. Hurry though. I don’t want to stay here longer than necessary.’

The word came back to him – ‘Four Scouts killed and five walking wounded if we get a move on. Jackie’s badly hit but I think we can move him along between us.’ And then after a long pause, ‘Harry’s missing.’

‘Anyone know what happened to Harry?’

‘Last I saw of him, he was strapping up Jackie’s shoulder. He was supposed to be behind us. Oh, Lord! I know what happened to him, poor sod! Got cut off and had to come back up the black nullah. Had to climb a cliff face.’

‘Anybody with him? You! Ahmad!’ The Colonel switched easily to Pushtu and continued, ‘Did you see what happened?’

It emerged that the three men who’d been with him had succeeded in negotiating the cliff face, one slightly wounded, one slashed across the face by a flying chip of stone. But Harry had been hit climbing the cliff and had fallen to its foot. He’d been shot through the shoulder and one arm was useless. He’d broken his leg in two places falling down the cliff.

Harry had tried to move but he couldn’t get his limbs to obey him. In his trouser pocket was a cyanide pill but he couldn’t reach it. With years of experience of the frontier behind him he understood the situation in all its stark reality. If he was lucky he was within a few hours of death; if he was unlucky, within a few days. Uncomplicated, honourable and kind-hearted, Harry was well liked by all and loved by his men. The Pathan troopers he commanded were as uncomplicated as himself. They had no question at all as to what they should do. Slinging their rifles across their shoulders, they were already forming up to go straight back in and get him out but the Colonel took one further look at the terrain. Harry lay at the end of a narrow defile, thirty feet wide at the most at its base, overlooked on both sides by towering cliffs and by Afridi, each commanding a wide field of fire through which a rescuing force would need to pass. It was a lethal option.

‘I’m going to have to give the order.’

Jock mopped his red face. His hands were shaking and his eyes unfocused with remembered terror at the mad forward dash. ‘Bloody country!’ He said it again to himself. ‘Who wants the bloody place? And these people? Leave them, for Christ’s sake, to kill each other as they always have and as soon as possible!’

He squinted up at the hills. Was he imagining it or had the enemy fire subsided? It was nearly dusk and the dark fell abruptly in these hills. Had they given up for the day and gone home to their tea? Not willing to answer back to the Lewis guns probably. He’d heard the Afridi, like all Pathan tribesmen, were clever tacticians, brave mountain fighters certainly – none braver – but they were careful and knew when to retreat. They had the skill to disappear into the hills as silently as they had arrived. Save your men and bullets to fight another day was their policy. He listened hopefully. Yes, that’s probably what they were doing. Getting out while the going was still good. It’s what he would have done himself.

The men had fallen silent and were obeying the Colonel’s command to prepare to withdraw back to the original position half a mile away, from where they could, under cover of darkness, make it back the five miles to their base at Fort Hamilton. Wounded were being tended, stretcher bearers were falling in.

The stillness was shattered by a thin and wavering scream. Rigid with fear, Jock said, ‘For God’s sake! What was that?’ His fellow officers couldn’t meet his eye. ‘What the hell was that?’ he asked again.

‘That was Harry,’ said one of them at last.

The scream was repeated again and again and again. The shrill note changed abruptly to a bubbling gurgle. The silent company went methodically about their business, flinging an occasional stony glance at their commander. But for Jock, disgusted terror and helplessness were turning to furious rage. He’d only met him short days ago but Harry had been kind to him from the moment of his arrival at the fort on attachment to the Scouts, welcoming, encouraging, joking and now in the throes of a hideous death. The subaltern was a Scotsman. He was, moreover, a hill man himself, a stalker by upbringing and, reared on tales of ancestral gallantry, he had considered himself a match for anyone. The cry – the despairing cry from the gathering darkness – was heard again and was now accompanied by shouts of laughter muffled by distance but ribald and derisive.

Last Tales by Isak Dinesen
The Colour of Milk by Leyshon, Nell
Red Snow by Christine Sutton
Tangled by Karen Erickson
Killing Time In Eternity - Edge Series 4 by Gilman, George G.
The Choices We Make by Karma Brown
Chasing Tara (Bryant Station Curves) by Rachels, Rayne
The Taste of Night by Vicki Pettersson
All for This by Lexi Ryan
Tagged for Terror by Franklin W. Dixon
Our partner