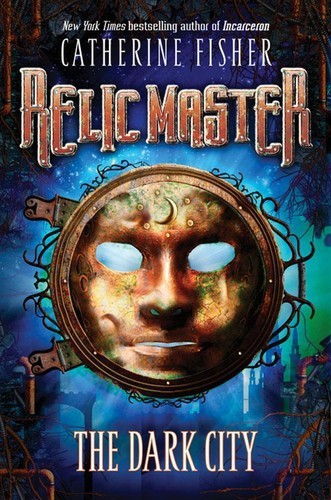 The Box of Flames

The house of Trees

First published in the United States 2011 by Dial Books

The dark city / by Catherine Fisher.

Summary: Sixteen-year-old Raffi, Master Galen, and a mysterious traveler, Carys, enter the ruined city of Tasceron seeking a relic that may save the world, while evading the Watch, a brutal organization opposed to the Order to which Raffi and Galen belong.

To Stephen Herrington for the idea 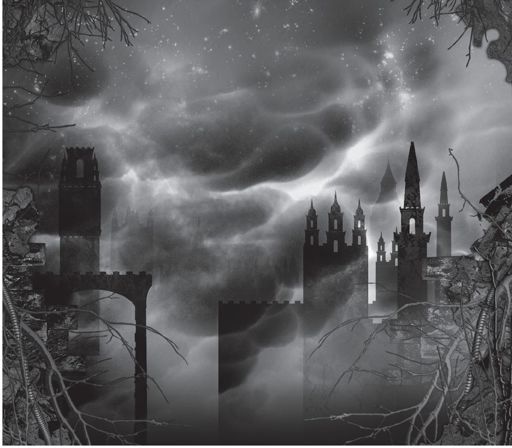 The Box of Flames

Litany of the Makers 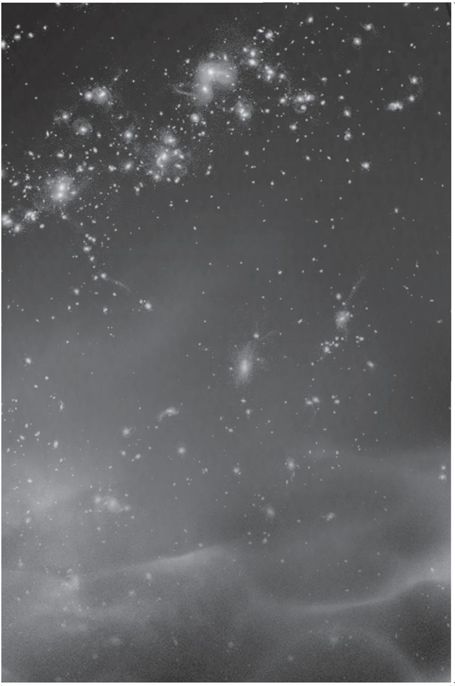 T
HE SEVEN MOONS were all in the sky at once. Tonight they made the formation that Galen called the web: one in the center—Pyra, the small red one—and the others in a circle around her. They glimmered over the treetops; it was a good omen, the sisters’ most perfect dance.

Raffi stared up at them with his arms full of wood. As an experiment, he let his third eye open and made tiny purple filaments of light spray from the central moon to all the others, linking them in a flaring pattern. After a while he changed the color to blue, managing to hold it for a few minutes, and even when it faded, a faint echo still lingered. He watched it till his arms were tired, then he held the wood more carefully and turned away.

That had been better than last time. He was getting quite good at it—he ought to tell Galen.

Gathering up more of the crumbling twigs, he moved through the dark trees resentfully. It was no use talking to Galen. The keeper was in one of his bitter moods; he’d only laugh, that short, harsh laugh of contempt.

The wood was very dry, rotting on the forest floor. Huge ants scurried out of it, and the armored woodgrubs that chewed slowly. He flicked a shower of them from his clothes.

The forest was quiet. Two nights ago a pack of woses had raged through here, tearing great holes in the leaf canopy; the wreckage still lay under the oaks. In the green gloom of the night, insects hummed; something whistled behind him in the wood. It was time he was getting back.

He pushed through hanging ivies and across a clearing deep in bracken, alert for snakes and the venomous blue spiders, but only shadows shifted and blurred among the trees, too far off to see or sense. He’d come farther than he’d thought and in the shafts of moonlight, red and pale and rose, the path looked unfamiliar, until the trees ended in a bank of dead leaves. He waded through them to the hillside, seeing the vast black hump of the cromlech and Galen’s fire like a spark in its shadow.

Somewhere behind him, far behind, something had tripped one of the sense-lines. The warning tweaked a tiny pain over one eye; he recognized it at once. The lines were well above ground; whatever it was, it was big, and coming this way. He listened, intent, but only the night sounds came to him, the insect buzz and the flittermice, the crackle of the fire.

Scattering wood, he ran down quickly.

“What’s the matter?” Galen sat carelessly against the slabs of the tomb, his coat tugged tight around him. “Scared of moths now?”

Raffi dumped the wood in a heap; dust rose from it. “One of the sense-lines just snapped!”

The keeper stared at him for a moment. Then he turned to the fire and began piling the wood onto the flames. “Did it now.”

“It could be anyone!” Raffi dropped to a crouch, almost sick with worry, the strings of purple and blue stones he wore around his neck swinging. He caught hold of them. “It could be the Watch! Put the fire out at least!”

Galen paused. When he looked up, his face was a mask of flame light and haggard shadows, his deep eyes barely gleaming, his hook nose exaggerated like a hawk’s. “No,” he said harshly. “If they want me, let them come. I’ve had enough of skulking in the dark.” He eased his left leg with both hands. “What direction?”

“From the mountains.” He mused. “Could just be a traveler.”

“Maybe.” Raffi was preoccupied. Another line had twanged in his skull, closer now.

Galen watched him. “So. Let’s put my pupil through his paces.”

“No better time.” He turned his lean face to the fire. “If it is an enemy, what might we put on the flames?”

Raffi, appalled, rubbed his hair. He was scared now; he hated Galen in this mood. “Bitterwort. Scumweed, if we had any, goldenrod to make him sleepy. Shall I do that?”

“Do nothing, unless I tell you. Say nothing.” Sharply, Galen raised his head, his profile dark against the smallest moon. “Have you got the blue box?”

Raffi nodded; he clutched it, in his pocket.

“Use it only if the danger is extreme.”

A twig snapped. Somewhere nearby a were-bird shrieked and flew off through the branches. Behind it, Raffi caught the snuffle of a horse.

He stood up, heart thumping. Behind him the cromlech was black and solid, the rock face gnarled under his palms, hollowed by a thousand years of frost and rain. Lichen grew on it, a green powder over the faint carved spirals. It felt like a great beast, fossilized and hunched.

Galen pulled himself up too, without his stick. His long hair swung forward, the tangled strings of black jetstones and green crystal catching the light, the heavy cowl of his coat high around his neck.

The keeper gave him a scornful glance. “Don’t worry. I won’t risk your life.”

“It’s not mine I’m worried about.” But Raffi muttered it sullenly under his breath, feeling for the powders and the blue box.

A horse came abruptly out of the wood.

It was tall, one of the thin, red-painted kinds they bred beyond the mountains, and the sweat on its long, skeletal neck made it ghostly in the sisters’ light. It walked forward and stopped just beyond the flicker of the fire. Staring into the dark, Raffi could just make out the rider: a dim, bulky figure muffled against the cold.

Raffi glanced into the trees. He couldn’t sense anyone else. He tried to look into the wood with his third eye, but he was too nervous; only shadows moved. The rider stirred.

“A fine evening, friends.” His voice was deep; a big man.

Galen nodded, his long dark hair swinging. “So it is. You’ve come far?”

The horse shifted, its harness clinking softly. The rider urged it a few steps forward, perhaps to see them better.

The horse’s fear was tangible, a smell on the air. It was terrified of the cromlech, or perhaps the invisible web of earth-lines that ran out from it. The man, too, sounded tense when he spoke again. “I don’t think so, keepers.”

Galen’s voice was quiet as he answered. “That’s an unlucky title. Why should we be keepers?”

“This is an unlucky place. Who else would be living here?” The rider hesitated, then swung himself down from the saddle and came forward a few steps, unwinding a filmy, knitted wrapping from his face.

They saw a powerful, thick-set man, black-bearded. A crossbow of some sort was slung on his shoulder. He wore a metal breastplate too; it gleamed in the light of the moons. Dangerous, Raffi thought. But nothing they couldn’t handle.

The stranger must have thought the same. “I bring no threat here,” he went on quickly. “How could I? There’s no doubt an armory of sorcery aimed at me as I stand.” He held up both hands, empty; a jewel gleamed on the left gauntlet. “I’m looking for a man named Galen Harn, a Relic Master.” He glanced at Raffi, expressionless. “And for his scholar, Raffael Morel.”

“Are you now,” Galen said bleakly. He shifted; Raffi knew that his leg would be aching, but the keeper’s face was hard. “And what do you want with them?”

Kinky Bet by Maggie Nash
Denying the Wrong by Evelyne Stone
Journey by Moonlight by Antal Szerb
Ursus of Ultima Thule by Avram Davidson
A Brief Chapter in My Impossible Life by Dana Reinhardt
Slow Sex: The Art and Craft of the Female Orgasm by Nicole Daedone
LYCCYX Episode 1: The Declaration by Barber, Brian
Captive Justice: A Private Investigator Mystery Series (A Jake & Annie Lincoln Thriller Book 4) by Rayven T. Hill
Cowboy Save Me: By Judith Lee (Tiller Brothers Book 1) by Lee, Judith
The Magic of You by Johanna Lindsey
Our partner