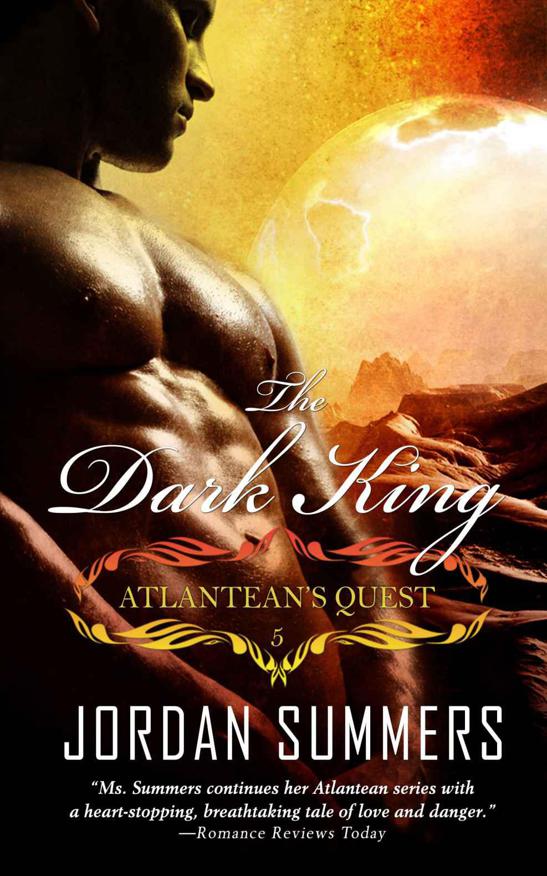 This ebook is licensed for your personal enjoyment only. This ebook may not be re-sold or given away to other people. If you would like to share this book with another person, please purchase an additional copy for each person you share it with. If you are reading this book and did not purchase it, or it was not purchased for your use only, then you should return to Amazon.com and purchase your own copy. Thank you for respecting the author's work.

Taylor Shelley has always had the worst taste in men. When her latest ex turns out to be part of the Russian mob, she's offered the chance to start a new life…on another planet.

No more bad boys for her.

Hades, The Dark King is both feared and rejected due to his mixed Atlantean/Phantom heritage. As King of the Phantoms, he rules his land via blood and claw. Hades doesn't have time to watch over a human female, even one as enticing as Taylor, but a debt is a debt. If keeping an eye on the woman for a week will clear the slates, then he'll do it.

Taylor isn't sure how a cage-fighter ended up on the throne, but she wants nothing to do with this royal bad boy.

What starts as an obligation, ends in a game of seduction where the players are evenly matched. There's only one rule to remember when playing with the Dark King—the house ALWAYS wins.

The warrior slipped into the communications room, during the shift change and shut the door behind him. Not that his presence would be questioned if he were found. No, the guards wouldn’t give him a second thought. But treason was best performed without an audience. He had minutes before the new guards arrived.

The red and white communication’s crystals sat upon a metal table in the center of the room. They glowed and pulsed, indicating that they were ready to use. In the corner, a green crystal coruscated, verifying that the energy field around the Walled City was active. Had the energy field been expanded to cover the surrounding areas, the crystal’s green color would’ve morphed to gold, signifying that they were under attack.

With a careful twist of his wrist, the beep turned into a signal, a beacon projected into space. The type of distress beacon a Slaver ship would be unable to resist. The warrior waited as long as he dared to ensure the message had gone out, then returned the crystals to their original positions.

Time to see how the Dark King handled unwanted company.

Once the Phantom people saw how unsafe their city was, Hades would have to accept his challenge for the throne.

Linx strode into the dank cavern. Flames lit the walls, casting long shadows over the wet rock. The musty air tickled his nostrils, making him want to sneeze. The ground crunched as the rock beneath his boots crumbled under his weight. Behind him, his mate’s sister, Taylor stared wide-eyed into the darkness. She hesitated at the entrance for a moment, then followed him inside. Her kitten heels tip-tapped on the stone as she rushed to catch up.

“Remember what I told you about the Dark King,” Linx said.

Taylor glanced at him. “I will, stop worrying.” She rubbed her hands over her arms to ward off a chill.

No, it was worse.

These days Hades loved to rule his Kingdom like some dark lord from the underworld, but that hadn’t always been the case. When he’d first risen to the throne, he'd railed against the voices of dissension. Strove to bring his people together. But eventually he became disillusioned by what the Phantom people were saying and decided to become the abomination they accused him of being. Neither the Phantom world nor the Atlantean one fully accepted him, but very few were stupid enough to challenge him.

Linx looked at the woman beside him. Perhaps her being here would create change. “I’ll bring Tabby as soon as I’m able to petition the Atlanteans for your status upgrade. I have no doubt that once they hear the circumstances under which you came here, they will accept you as a citizen of New Atlantis,” Linx said. “But it will take time.”

Taylor snorted. “Nice to know that bureaucracy exists everywhere in the universe.”

Linx smiled, but his grin faded as a regiment of towering guards came into view. The men were all Phantom Warriors. A bit of a surprise given the King's mixed heritage. The guards stood in front of a massive metal door that looked like something from medieval earth. Linx stepped forward. “Phantom Warrior Linx. I'm here to see the Dark King,” he said in a loud voice, officially announcing his arrival.

“State your business, Phantom,” the nearest guard ordered. His red eyes glowed in the darkness, but held all the warmth of a glacier.

Linx felt a clumsy touch in his mind as the Phantom tried to read his thoughts. He fought back a smile, then pictured himself in a state of undress.

The guard's face flushed and his gaze narrowed accusingly, then he straightened to attention.

Linx kept his expression innocent. “I have an appointment with the King. As for what it's about, that is none of your business. Just tell him that I'm here,” he said. If things went well, he'd leave his Royal Crankiness with more than a new charge to care for. It was time the Dark King joined the land of the living again.

The guard's jaw clenched and unclenched as an internal struggle took place. Eventually reason won out and he said, “One moment.” The other Phantoms continued to block the entrance as the lead guard stepped away.

It took fifteen minutes for the guard to return. Linx was sure that he’d kept them waiting on purpose. The Phantom barked an order and the guards slowly parted to reveal another door, this one made of thick stone, beyond the metal one they were blocking.

Taylor had never been more terrified in her life. Not even when the Russians were torturing her sister, Tabby, which was saying something. She had no idea what was on the other side of that great stone door, but if it was anything like the entrance to the cavern, then it wasn't going to be good. Whose idea was it to build a palace—scratch that—fortress inside a mountain? She didn't think things like this existed outside of the movies.

She'd been moved from what amounted to a windowless shipping container straight to Linx’s transport. He had made her duck down to avoid detection, so she hadn't seen much of New Atlantis or the Walled City. Heck, she'd barely gotten a glimpse of the light green sky. What she wouldn't give for a little sunshine. If it weren't for the tanned skin on the warriors they'd passed, Taylor would've thought she was being dropped off in the land of the mole people.

Linx looked back at her. "Ready?"

"As I'll ever be." She took a steadying breath.

"Before we go in, take this. You'll need it if there's any trouble." He handed her a small round disc that looked like a black pebble.

"What am I supposed to do with a rock? Throw it at him?" From what she'd seen of the Phantom Warriors, she'd need something a lot bigger than a pebble to stop one.

Linx didn't bother to hide his impatience. "It's a communication device. You can reach me any time by touching the top. Your sister made me promise to give you one. I'm pretty sure that Hades won't hurt you, so hopefully you won't have to use the device."

The mention of her sister, Tabby made Taylor's heart clench, which was why it took her a moment to register what else Linx had said. "Pretty sure?" As in he had some doubts about her safety. "Your lack of confidence in the Dark King is not reassuring," she said.

Linx sighed. "I'm positive he won't. No Phantom Warrior would ever raise his hand to a woman. The punishment for such things is...
severe
." He eyed her critically. "Besides, you're kind of his 'type'. He has a thing for long hair and full breasts."

Linx grinned. "Good point. Ultimately his taste in women matters not, since you'll be under his protection and you'll only be here a week tops."

"I think the King and I will be able to resist temptation for a week," she said dryly.

She pulled a face. “Ew, too much information.”

The hair on Taylor's arms rose.
What was that cat up to? And why didn't she think she was going to like it.
"Thanks for the device." She tossed the communicator into the air and caught it, then shoved it into her pocket.

He stepped forward. She followed close behind. More guards poured out of the shadows, blocking their entrance. Their fierce expressions never wavered as they frisked them, before they were allowed through the stone door.

Linx glared at the guard, who was a little too thorough in frisking Taylor, but he didn’t say a word. She gave him a small reassuring smile, but she was trembling by the time the Phantom finished. Taylor was used to men trying to cop a feel, used to them ogling her. When you take your clothes off for a living, you get used to a lot of things. But dealing with men and dealing with shape-shifting aliens were two very different things.

She thought about the pain and horror Tabby had gone through because of her poor judgment in men. If her twin could live through torture, then Taylor could survive the next week. Tabby may not think she was strong, but she was wrong. Taylor had learned to be strong, learned how to survive. She'd had to when she had gone into exotic dancing, since it wasn't exactly an accepted profession.

People looked down on her, but Taylor refused to look down upon herself. In her mind, she had nothing to be ashamed of...at least not until she hooked up with Sergei. Her mistakes from that day forth had piled up until Taylor was convinced she'd never see daylight again. Fortunately, her sister and the man—make that alien—standing beside her had saved her life, given her a second chance, and she was determined to make the best of it.

No more mistakes. No more screwed up relationships. A proper 'do-over'.

Linx stepped through the door. When she reached his side, he took her hand and placed her palm upon his arm before escorting her deeper inside the room. The move was oddly formal and caused butterflies to attack her stomach.