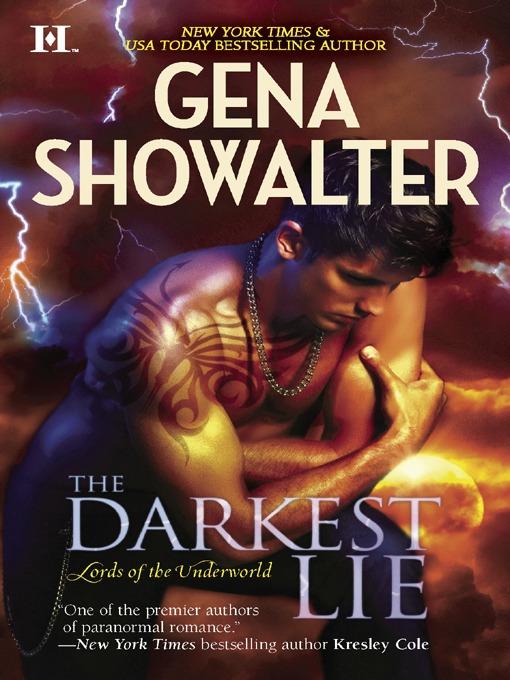 "The Showalter name on a book means guaranteed entertainment."

"[Showalter] infuses her stories with plenty of passion, hope and love. If you like your paranormal dark and passionately flavored, this is the series for you."

"Thanks to Showalter's great writing and imagination, this story, reminiscent of a reality show with all-powerful gods pulling everyone's strings, will really appeal."

"Showalter's darkly dangerous Lords of the Underworld trilogy, with its tortured characters, comes to a very satisfactory conclusion...[her] compelling universe contains the possibility of more stories to be told."

"In this new chapter the Lords of the Underworld engage in a deadly dance. Anya is a fascinating blend of spunk, arrogance and vulnerability--a perfect match for the tormented Lucien."

"A fascinating premise, a sexy hero and nonstop action, The Darkest Night is Showalter at her finest, and a fabulous start to an imaginative new series."

"The versatile Showalter...once again shows that she can blend humor and poignancy while keeping readers entertained from start to finish."

"A world of myth, mayhem and love under the sea!"

"Another sizzling page-turner from one of the premier authors of paranormal romance. Gena Showalter delivers an utterly spellbinding story!"

"Shines like the purest gem...Rich in imagery and evocative detail, this book is a sterling example of what makes romance novels so worthwhile."

Heart of the Dragon

"Lots of danger and sexy passion give lucky readers a spicy taste of adventure and romance."

"This couple is dynamite and Tristan's intense sensuality will have you sweating. [The Pleasure Slave] is definitely going on my keeper shelf."

Lords of the Underworld

I'm delighted to present The Darkest Lie, the sixth installment of my paranormal series, Lords of the Underworld. In a remote fortress in Budapest, twelve immortal warriors--each more dangerously seductive than the last--are bound by an ancient curse none has been able to break. When a powerful enemy returns, they will travel the world in search of a sacred relic of the gods--one that threatens to destroy them all.

In this story Gideon, the keeper of Lies, battles Scarlet, the keeper of Nightmares. And by "battles" I, of course, mean seduces, infuriates, utterly baffles and completely charms. She claims to be his long-lost wife. Only problem is, he can't remember her. But, oh, does he want her. And he'll do anything to have her...

Join me on a journey through this darkly sensual world, where the line between good and evil blurs and true love is put to the ultimate test. And don't miss Into the Dark (out now!), featuring two extended Lords of the Underworld eBooks in print for the first time, plus fun bonus material, as well as The Darkest Passion, Aeron's story, also available now. And stay tuned for more Lords of the Underworld tales coming in 2011 as the stakes get higher, the quest more dangerous and the romance hotter!

Wishing you all the best,

Other sexy, steamy reads from GENA SHOWALTER and HQN Books

The Lords of the Underworld series

Heart of the Dragon

Tales of an Extraordinary Girl

More stunning tales from Gena Showalter are coming your way!

In September 2010, watch for the sequel to Intertwined Unraveled

In honor of the keeper of Lies, I thought I'd write this dedication in Gideon Speak.

To someone who didn't (and doesn't) help me every step of the way: Margo Lipschultz.

To my hated wife: Max.

And firstly, to Gideon herself. To my complete delight, you made my job so easy, the words flowing like smooth, rich wine. You never once proved stubborn, drove me to the edge of insanity or put yourself in impossible positions that I then had to scramble to find ways out of.
Thank you.

GIDEON STARED down at the woman sleeping atop the bed of cloud-soft cerulean cotton.

Inky hair tangled around an innately sensual face, long lashes casting shadows over graceful cheeks. One of her hands rested at her temple, her fingers curling inward, her azure-painted nails gleaming in the golden glow of the lamp. Her nose was perfect in shape and size, her chin stubborn, and her lips the plumpest--and reddest--he'd ever seen.

And her body...gods. Perhaps those made-for-sin curves were the reason she bore the name Scarlet. Her wickedly rounded breasts...the slender dip of her waist...the feminine flare of her hips...the lean length of her legs...every part of her was meant to lure, to ensnare.

Without a doubt, she was the most hauntingly lovely female he'd ever beheld. A genuine sleeping beauty. Only, this beauty would come up swinging if he tried to kiss her awake.

The thought had him grinning in pure male satisfaction.

One look, and a man knew she was passion and fire underneath that snow-white skin. What most men didn't know, however, was that, like Gideon, she was possessed by a demon.

Difference is, I earned mine. She didn't.

For-freaking-ever ago, he'd helped his friends steal and open Pandora's box, unleashing the evil inside. Yeah, yeah. A mistake. Hardly worth a second's thought, if you asked him, but the gods hadn't, so, as punishment, each warrior responsible was cursed to host a demon inside his own body. Baddies like Death, Disaster, Violence, Disease, yada yada.

There'd been more demons than warriors, though, so the remaining fiends had been placed inside the immortal prisoners of Tartarus. Where Scarlet had resided her entire life.

Gideon was paired with Lies, Scarlet with Nightmares.

Clearly, he'd gotten the short end of that demon-stick. She merely slept like the dead and invaded people's dreams. He couldn't utter a single truth without suffering. To tell a pretty woman that she was pretty was to fall to his knees, agony unlike any other exploding through him, cutting at his organs, acid spilling through his blood, draining his strength, even eroding his desire to live.

"You're ugly," he'd have to say instead. Most females would burst into tears and run the hell away. So, yeah, he was immune to tears.

But what would Scarlet do? he found himself wondering. And would her tears bother him?

He reached out and traced a fingertip along the curve of her jaw. Such silky, warm skin. Would she laugh at him, unconcerned? Would she try and slice his throat? Believe him? Call him a liar?

The thought of hurting her, angering her and ultimately losing her didn't sit well with him.

He'd already made it once.

Gideon's greatest enemy, the Hunters, had captured him and told him that they'd killed Sabin, keeper of the demon of Doubt. Now, Gideon loved that man like a brother--boy could bitch-slap like no one else--so he'd erupted, screaming how much he hated them, how he was going to kill them all, and it had been the gods' honest truth, every word of it. Though it might take him years, centuries, to see the promise through, that didn't matter. He'd meant it and had been penalized for it, the anguish instantaneous.

After that, curled on the floor and writhing, he'd been an easy target for torture. And torture him the Hunters had. Repeatedly.

After beating him so severely his eyes had swollen shut and several teeth had flown the coop, after shoving sharp pins under his nails, electrocuting him and carving the mark of infinity--their mark--into his back, they'd removed his hands. He'd seriously thought he'd reached the end. Until a very much alive Sabin had found him, rescued him and carried him home (after doing some of that aforementioned bitch-slapping).

Thankfully, both of his hands had finally regenerated. Something he'd been waiting for. Very...patiently. So he could seek revenge, yes. Or rather, that had been the case at first. But then his friends had jailed this woman, this Scarlet, and she had claimed they were husband and wife.

His priorities had kinda switched at that point.

He didn't remember her, much less wedding her. But he had seen flashes of her face all these thousands of years. Mostly every time he collapsed atop a woman, sweaty but not truly replete because he was too filled with longing for something, or someone, he hadn't been able to name. Therefore, he couldn't outright deny her claim. And he needed to deny her. To prove her wrong.

He'd have to live with the knowledge that someone had fucked with his memory.

Yeah, he'd demanded an explanation from Scarlet, but she was stubborn to her core and had refused to tell him anything more. Like how they'd met, when they'd met, if they'd been in love, happy. How they'd split.

To be honest, he couldn't blame her for keeping the details a secret. How could he? She had been as much a prisoner to the Lords as he'd recently been to the Hunters, and he hadn't talked to his captors, either. Even during that oh, so pleasant hand extraction.

So, he'd come up with a plan. For Scarlet to open up to him, he would have to take her somewhere else. Just for a little while. Just until he had answers. Then, this morning, he'd done it. While his supposed wife slept, oblivious to the world around her, he'd kidnapped her from his home and carted her fireman-style to this hotel in central Budapest.

Finally, he would have everything he wanted.

All He Really Needs by Emily McKay
COOL BEANS by Erynn Mangum
World Made by Hand by James Howard Kunstler
The Yard by Alex Grecian
Black Like Me by John Howard Griffin
Mountain Bike Mania by Matt Christopher
My Bluegrass Baby by Molly Harper
Liberate Yourself (The Desires Unlocked Trilogy Part One) by Blake, Evie
Little Miss Stoneybrook...and Dawn by Ann M. Martin, Ann M. Martin
The Summons by Peter Lovesey
Our partner