Read The Darling Dahlias and the Silver Dollar Bush Online

The Darling Dahlias and the Silver Dollar Bush 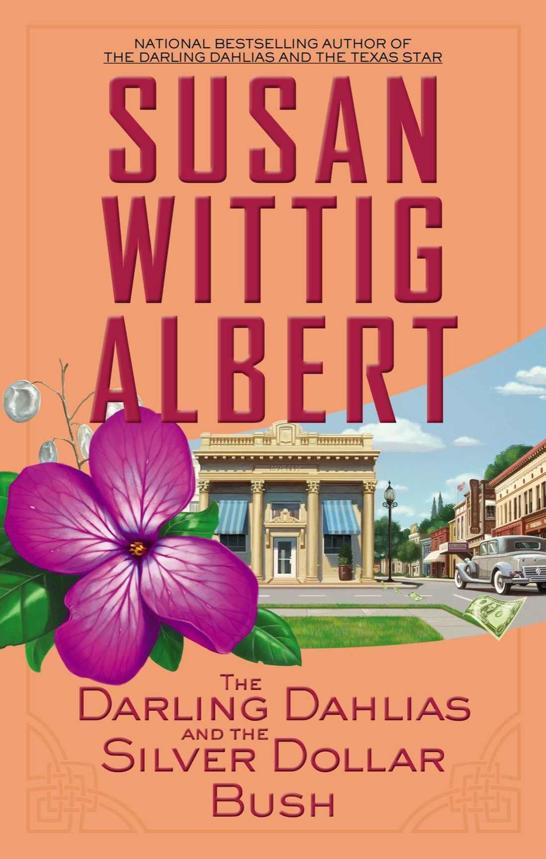 A DILLY OF A DEATH

THE TALE OF HILL TOP FARM

THE TALE OF HOLLY HOW

THE TALE OF CUCKOO BROW WOOD

THE TALE OF HAWTHORN HOUSE

THE TALE OF BRIAR BANK

THE TALE OF APPLEBECK ORCHARD

THE TALE OF OAT CAKE CRAG

THE TALE OF CASTLE COTTAGE

THE DARLING DAHLIAS AND THE CUCUMBER TREE

THE DARLING DAHLIAS AND THE NAKED LADIES

THE DARLING DAHLIAS AND THE CONFEDERATE ROSE

THE DARLING DAHLIAS AND THE TEXAS STAR

THE DARLING DAHLIAS AND THE SILVER DOLLAR BUSH

With her husband, Bill Albert, writing as Robin Paige

DEATH ON THE LIZARD

Other books by Susan Wittig Albert

WORK OF HER OWN

In memory of my mother, Lucille Franklin Webber, who lived through the 1930s with courage and grace and shared her stories with me.

Other titles by Susan Wittig Albert

ONE: Out of Money!

TWO: The Root of All Evil

THREE: Brother, Can You Spare a Dime?

NINE: Violent Events, as Told to the Citizens of Darling

TEN: Charlie Dickens: The Morning After the Night Before

TWELVE: Verna Is on the Case

SEVENTEEN: The Dahlias Get Beautiful

If you’ve been following this series, you know that it is set in the 1930s, during the dark years of the Depression. The previous book,
The Darling Dahlias and the Texas Star,
took place in July 1932, when the newly nominated Democratic presidential candidate, Franklin Delano Roosevelt, was squaring off against the incumbent Republican president, Herbert Hoover. Roosevelt, then the governor of the state of New York, was not widely known, and people weren’t sure what direction he might take to solve the nation’s economic woes.

But as many historians have pointed out, it didn’t matter much whose name was on the ballot, because folks were voting for A.B.H.—Anybody but Hoover. With unemployment above 20 percent and rising, Hoover didn’t have any strategies to turn the economy around. Roosevelt won with 57 percent of the vote, while the Democrats took control of the Senate and expanded their control of the House. Around the country, the jaunty tune “Happy Days Are Here Again”—FDR’s campaign song—could be heard everywhere.

Those “happy days” were years in the future, however, and the four bleak months between the election and Roosevelt’s March 4 inaugural witnessed the worst banking panic in American history. Fearing that their local banks would close and their funds would suddenly vanish, people rushed to withdraw their money and stash it under their mattresses or in coffee cans buried in the backyard. Before the end of February 1933, so much money had drained out of the banking system that banks couldn’t cover the losses and a dozen state governors had either frozen withdrawals or declared a “bank holiday.” By the final weeks of Hoover’s presidency, some 5,500 banks in thirty-one states were on “holiday,” their windows shuttered and CLOSED signs hung on their front doors.

And for many communities, this was a tragedy. As far as commercial businesses and individuals were concerned, the closing of the local bank meant that there was simply no money. Companies couldn’t meet their payrolls. Stores couldn’t stock their shelves. People couldn’t buy milk or bread or put gasoline in their flivvers.

But Americans are resourceful, and if the banks weren’t handing out enough cash to keep the wheels of commerce turning, by golly, the citizens themselves would
make
some. Thus was born the concept of Depression “scrip”: paper currency that was produced locally—by merchants, by merchant associations, or by municipalities—to solve local money problems. It wasn’t the solution to the banking crisis, but it did help businesses meet their payrolls, put groceries on the shelves of local stores, and enabled mothers to buy a quart of milk for their babies and baloney for their husbands’ sandwiches.

And when it came to scrip, even the funnyman Will Rogers found something to chuckle about. “Everybody is all excited over ‘scrip,’” he wrote on March 6, 1933. “We are all for it. The way it sounds all you need is a fountain pen and a prescription blank. That’s what we been looking for for years, a substitute for money.” So bring on the scrip, he added. It might not
be
money but it
spent
like money, which was going to make everybody want to buy something.

And that, of course, was exactly what the economy needed: lots of people buying lots of stuff—except that in little Darling, Alabama, things didn’t quite work out that way. And thereby hangs a tale:
The Darling Dahlias and the Silver Dollar Bush.

A word about words. Writing about the rural South in the 1930s requires the use of images and language that may be offensive to some readers, especially words that refer to African Americans, such as “colored,” “colored folk,” and “Negro.” Thank you for understanding that I mean no offense.

We have to say that we were very surprised when Mrs. Albert approached us about writing another book about our Darling garden club. The last few weeks have been so tough here in our little town (like everywhere else around the country, probably) that it hardly seems right to make a story out of people’s hardships.

But even though things looked pretty grim for a while, we got through the rough waters and now our town is managing to sail along on a more even keel, with a little more money in our pockets—or what passes for money, anyway. And as Mrs. Albert points out, we’re all in the very same boat these days and when we feel like it’s sinking right out from under us, it helps to know how others have managed to stay afloat.

So in the interests of letting other towns know how Darling managed to survive the threatened closing of its one and only bank, we’ve told Mrs. Albert that we would help her write her book. And when she asked us to recommend a title (“a garden plant that’s connected with the story” was what she said), some of us came up right away with
The Silver Dollar Bush.
We thought of that
because the dried seed pods look so much like silver dollars and this story has to do with money and the lack of it and how we coped.

The silver dollar bush is the plant that Miss Rogers (our Darling librarian) insists on calling by its Latin name,
Lunaria
. But as Mildred Kilgore reminded us,
Lunaria
also goes by the name of “moonwort,” because the silvery seeds are round, like the full moon. And since Mickey LeDoux’s moonshine operation is a part of the story, she thought Mrs. Albert’s book should be called
The Moonshine Bush
.

Then Alice Ann Walker offered
The Honesty Plant
,
since that’s one of
Lunaria
’s names, too. Sadly, however, there seems to be quite a bit of
dishonesty
in this story, so that title was ruled out after some heated discussion.

The final vote was ten to three in favor of recommending
The Silver Dollar Bush
.
Mrs. George E. Pickett Johnson was absent, Miss Rogers abstained, and Mildred held out for
The Moonshine Bush
.

But we do want to tell you that while flowers are dear to the hearts of every single member of our garden club, we make room in our hearts—and our gardens—for plenty of vegetables, since we also like to eat. Aunt Hetty Little says to remind you of the old saying, “When you have only two pennies left in the world, you should buy a potato with one and a rose with the other.” She adds that if you can grow a potato, that means you can spend
two
pennies on roses, doesn’t it? And if you can grow roses, you can spend those last two pennies on shoes for the kids. Which leads her to say, “See there? A garden can even grow shoes.” And of course Aunt Hetty is right, as usual.

So we’re putting a little extra time into our gardens this spring—when we’re not helping Mrs. Albert with the research for her book, that is. We know she intends to include some of the bad things that happened in our town recently. But we trust her to show that most of us have hearts that are good as gold (even if gold is illegal) and only want the best for all our Darling friends and neighbors.