Read The Dead I Know Online

The Dead I Know 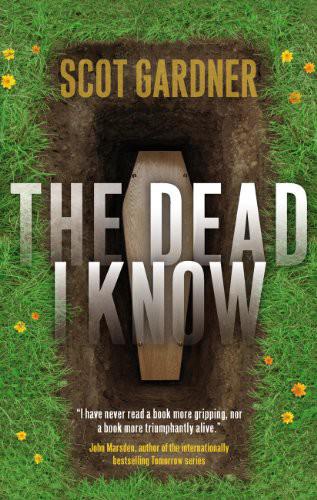 an imprint of Penguin Canada

Originally published by Allen & Unwin in Australia in 2011.

The dead I know / Scot Gardner.

T
HE OFFICE OF JKB
Funerals was a majestic orange-brick addition to a modest orange-brick house. It had the boxy gabled ends of an old chapel with tall narrow eyes of stained glass to suit. There were concrete urns either side of the entry door, spilling with white flowers. I checked my front for breakfast crumbs and then rapped on the door.

It opened with the smoothness of automation but there was a man at the handle, a round man with half a smile on his easy, ruddy face. He looked me up and down, then shielded his eyes as if my head was at the top of a distant mountain.

I wiped my feet more than necessary, and stepped past the man into the cool silence of the building. The door hushed shut and he held out his hand.

We shook. It was a strange sensation. I’d never shaken hands with anybody.

‘Please, come through. Have a seat.’

The chairs were deep lugubrious leather – more comfortable than anything I’d ever sat in.

‘Thank you for coming in, Aaron. Your school counsellor speaks very highly of you. I’m proposing a three-month trial period at the end of which we’ll sit here again and assess how we’ve gone. The work you’ll be doing will be varied. There’ll be be some fetching, heavy lifting and cleaning. Is your back okay? Need a good back in this line of work.’

He snatched a pen from a plastic holder and made notes on a pad. ‘No matter, I’ll have Mrs Barton measure you up and we’ll get something tailored.’

‘I have a black tracksuit,’ I said.

John Barton looked up, startled. ‘Tracksuit? No, I mean dress suit. What size shirt are you?’

He wrote some more. ‘You have an accent, Aaron. Where are you from? America?’

I shrugged again. ‘I grew up here.’

‘Is that so? What are your parents’ names? I may know them.’

The words hung in the air like a balled fist.

‘Right,’ he said. ‘First things first. How would you feel about getting a haircut?’

‘The first one is my treat.’

John Barton gave me a fleeting tour – office, chapel and viewing room with visitors’ toilets between, display room, storeroom full of plastic-wrapped coffins standing on their ends, coolroom door – on our way to the garage at the rear of the establishment. There was a quietness and studied neatness to the whole place. The service areas smelled of flowery air freshener with a metallic underscore of disinfectant. The garage, on the other hand, smelled of cool oiled dust. There were three vehicles parked inside – a fine silver Mercedes sedan, a white van that looked like an ambulance without the tattoos, and the hearse. The hearse’s chrome-and-black lustre rendered it catlike and serious in the glow from the skylight. There was a discreet crest painted on the driver’s door, containing three curlicued letters: JKB. The customised numberplates echoed the starkness of the hearse’s exterior – THEEND. If I’d been alone, I might have smiled at that.

‘We’ll take the Merc. Do you have a licence?’

‘We’ll have to do something about that.’

It was a smooth ride, scented with leather and more air-freshener flowers. John Barton drove with an easy poise, as if he operated at a more precise speed than the rest of the world. He double-parked on Chatswood, in front of the barber’s red-and-white spiral pole.

‘The proprietor is Tony Henderson. Tell him I’ll be paying. I’ll be back in twenty minutes.’

I nodded once and slipped out of the car. The door shut with a quiet huff of air and I felt . . . something. Hard to say what it was – some grey wake of a distant emotion, perhaps.

It was early in a barber’s day but the floor already boasted small piles of grey and brown hair. Tony Henderson nodded a greeting.

‘John Barton will pay,’ I said.

He ushered me to a chair.

He touched my head and I flinched.

I nodded and clenched my jaw. I hadn’t planned to flinch.

I noticed his aftershave and the dark hair on his knuckles. I avoided the mirror by staring at my cloaked knees as great long hanks of hair skidded over the smock and onto the floor. I tried to remember my last haircut and could only think of a time in fifth grade when I had been forced to remove a gob of gum with scissors. It was Westy – one of the drunks now living in caravan
57
– who put it there and he’d squealed with laughter when it stuck.

Tony Henderson shifted my head this way and that. He lifted my chin but stood between the mirror and me as he did so.

Foam and a balding brush. Keen steel in a deft hand. I could see my shape in the mirror, but I didn’t let my eyes focus.

Tony Henderson stood back and admired his handiwork. ‘I think you’ll pass.’

As if on cue, the plastic straps on the doorway clattered and John Barton entered.

Tony Henderson spun my chair, unclipped my smock and dusted my neck and face with a soft brush. I waded through the clippings on the floor. I avoided the mirror and, in doing so, looked straight at my new employer.

He was smiling and shaking his head. ‘Are you sure it’s the same fellow?’

‘With the emphasis on dark,’ John Barton added, not unkindly.

‘True,’ Tony Henderson said. ‘That’s a bonus in your industry, isn’t it?’

John Barton drew his wallet from his pocket and laid a fresh fifty on the counter. He patted it and turned to leave. ‘Keep the change.’

JOHN BARTON HAD
bought two white dress shirts and he handed me the bag as the garage door whined shut behind us.

‘Come,’ he said, and I followed him through a side door into a small grassy garden between the office and the residence. A clothes line full of white shirts and incongruously bright silk underwear creaked idly in one corner. John Barton caught me staring.

‘Yes, they’re my shorts. The suits are always black but I’m happy underneath.’

Too much information, I thought. I mean, underpants pride?

A dishevelled ginger cat mewed a mournful greeting as we passed. John Barton mumbled a reply and bent to rough its head.

‘Morning Moggy,’ he said. ‘This is Aaron. Aaron, this is Moggy.’

John Barton smiled. ‘She’s an oldie but a goodie. Just recently she’s decided that the whole house is her toilet. Pays to wear slippers in the morning.’

The house was full of television – all blue, blinking fury and noise. John Barton found the remote and poked it until the adverts became conversational.

‘We have a visitor.’

The woman who walked into the room wore a peach apron over a floral nightmare of a dress. Her hair was grey and limp like Mam’s. She grinned to reveal crooked teeth and shook my hand with enthusiasm, her fingers cool and soft.

‘Goodness, you’re a tall one!’

‘Respect where respect is due, dear.’

Mrs Barton swished off to the kitchen. ‘Mrs Gray is ready to be collected.’

A stillness settled over the room. Were they speaking about a death? Was Mrs Gray being collected from the mall with her shopping, or prised from a car wreck on the highway?

‘Could you measure Aaron, my dear?’ John Barton called. ‘He needs a suit.’

‘Of course!’ his wife replied.

John Barton inspected a scrap of paper beside the phone. ‘Best put one of those shirts on,’ he said. ‘There’s a bathroom just along the hall.’

I closed the door behind me quietly. A hairy brush rested in the sink. There was no room for it on the bench with all the beauty products and pill bottles. A wet mat was bunched on the floor beside a pile of discarded teddy-bear pyjamas and underwear. The air was all talcum, wet towels and fake flowers.

And there, in the mirror, was a stranger I had once known. His face was longer and leaner than I remembered, his skin smooth and clean. His black hair fell kindly to the brow over the eyes it used to conceal. He had ears – two of – and a new jawline.

‘Sorry about the mess in there,’ Mrs Barton called.

Her voice shattered my reverie and I hurriedly tore open a shirt packet.

‘We have a small piglet who lives with us. We call her Skye.’

The stiff, clean cotton felt rich on my skin. It was a good fit and I tangled with the buttons until there was no doubt about who was wearing whom. I undid my heavy belt and tucked the tails away inside my black jeans. I’d never worn white. I screwed the packet into a ball but it wouldn’t fit in the bin overflowing with tissues and empty toilet rolls. I carried it back into the lounge.

Rhyme and Reason by Jo Ann Ferguson
A Knot in the Grain by Robin McKinley
Metaltown by Kristen Simmons
Trouble from the Start by Rachel Hawthorne
Cuentos frágiles by Manuel Gutiérrez Nájera
IRISH FIRE by JEANETTE BAKER
Wings of Hope by Pippa Dacosta
To Sell Is Human: The Surprising Truth About Moving Others by Daniel H. Pink
Bound by Blood and Brimstone by Dunaway, D. L.
Mountain of the Dead by Keith McCloskey
Our partner