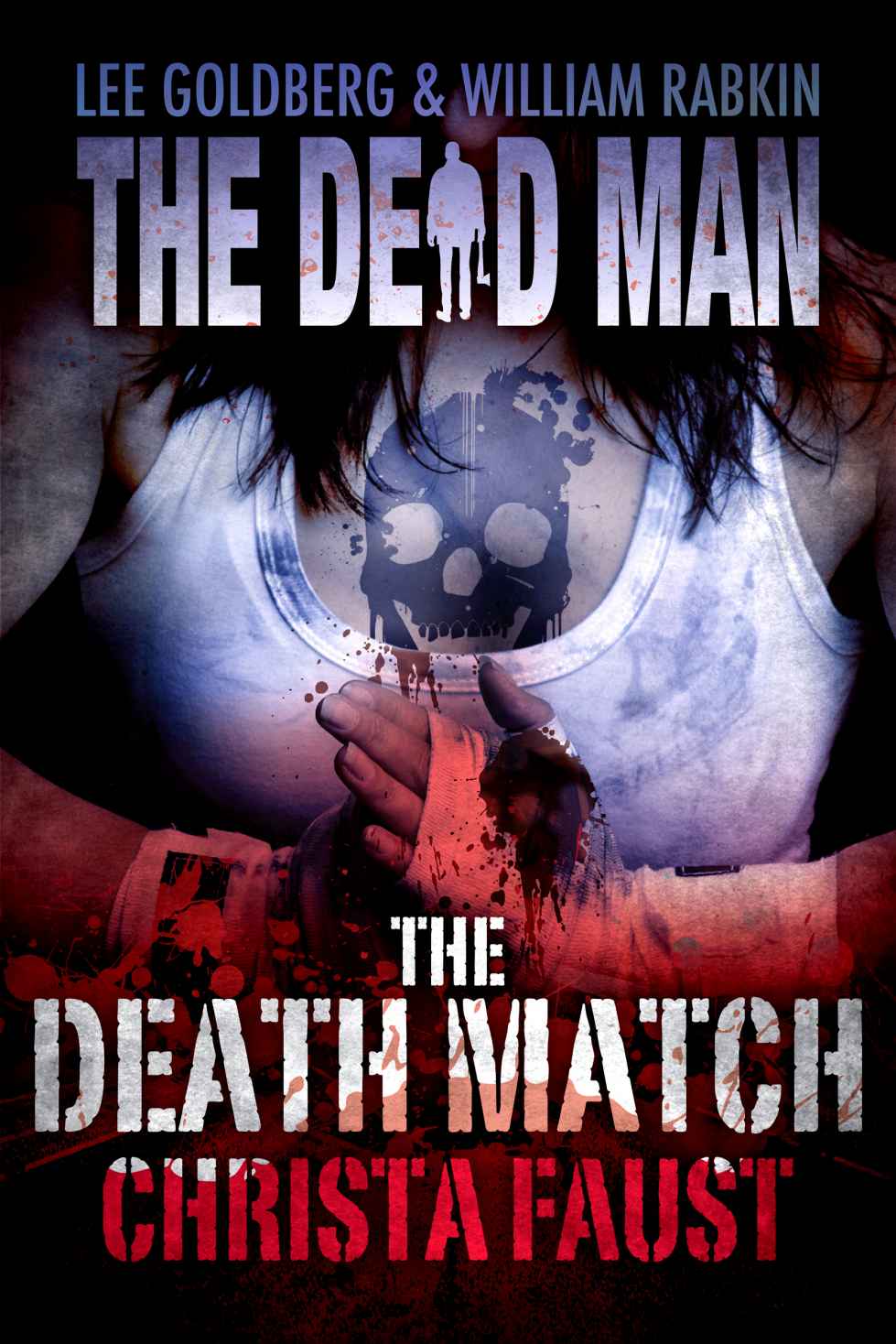 Text copyright © 2012 Christa Faust
All rights reserved.
No part of this book may be reproduced, or stored in a retrieval system, or transmitted in any form or by any means, electronic, mechanical, photocopying, recording, or otherwise, without express written permission of the publisher.

This book makes reference to several earlier
Dead Man
tales, including
Ring of Knives
,
The Dead Woman
,
The Blood Mesa
, and
The Midnight Special
. It’s not necessary for you to have read those books to enjoy this one, but knowledge of those stories will make this one more satisfying, especially for those following the mythology of the series.

Matt Cahill was tired. He’d just spent nearly an hour fighting off the relentless advances of a self-proclaimed cougar who’d given him a ride and figured he ought to return the favor. He’d been ready to chew his own leg off to get away from that woman by the time he’d made his escape through a rest-stop window outside of Diamond Springs, California. He’d been forced to hoof it to Perks Corner through a sudden downpour that lasted exactly the length of his walk and was currently sitting in a crummy diner called the Prospector’s Pie Barn, staring down at a slice of apple pie that was as soggy and uninspired as he felt.

It wasn’t just the hike or the rain or the amorous cougar that made him feel so tired. It was a profound, bone-deep kind of weariness that no amount of rest could kill. An inevitable side effect of his ongoing private war.

He’d been wandering aimlessly for nearly two months, searching for any sign of that elusive trickster Mr. Dark. As the days and nights passed without incident, blurring together into dull, meaningless sameness, a soft-spoken but adamant doubt had taken up residence inside his head. When he was fighting real physical manifestations of evil, his grandfather’s ax in hand and galvanized by a sense of unshakable purpose, his strange nonlife was almost bearable. But in the empty, quiet times like these, he found himself engaged in a different kind of battle. Tortured by doubt and questioning everything. Was he really the hero he tried so hard to be, or was he just plain crazy? Had he put the worst behind him, or was the worst still to come? He had to believe that there was some kind of
end, some way to beat Mr. Dark and get his own life back, but at times like this, he found he wasn’t so sure.

There was a folded, coffee-stained newspaper on the table, left behind by a previous customer. A traveler, obviously, since it wasn’t a local paper. It was the
Los Angeles Times
, and Matt was grateful for the distraction.

He browsed through shallow, breathless stories of glamour and mayhem. Severed heads and studio heads. Red-carpet dresses and skid-row murders. He was about to risk another sip of his sorry excuse for coffee when he spotted a photo that stopped him cold.

The story was sketchy and short. An eviscerated corpse fished out of the ocean near the Long Beach aquarium had been identified as twenty-seven-year-old dockworker Oscar Amezuita. Two photos were associated with the article. One showed the man’s widow, a chubby Mexican woman with a fading black eye too large to be completely hidden behind her sunglasses. She was standing over an open grave and holding the hand of a morose, lemur-eyed child whose gender Matt could not determine. But that wasn’t the photo that caught Matt’s attention. It was the other photo, a low-quality snapshot of the dockworker himself.

He was a large but otherwise unremarkable man. Latino, with light, acne-scarred skin and dark, thinning hair buzzed down to stubble. A little overweight, but thickly muscled beneath the fat. He was dressed in a sleeveless red T-shirt and turned slightly to the left, revealing a single tattoo on his right arm. A crude Ouroboros, the legendary snake swallowing its own tail. And beneath it, a dark splotch that could have been anything. A badly drawn portrait, an inept cover-up, a gang tattoo. It could have been any one of those things, except it wasn’t.

Because Matt knew exactly what it was. It was an image he had seen before. Not on human flesh, but carved into ancient stone on a mesa in New Mexico. And he would never forget the horror that had followed.

The photo was small and not very clear, but there was no question what Matt was looking at.

It was a portrait all right, but not of the dockworker’s mom or his dead homey.

It was a portrait of Mr. Dark
.

Staring at that blurred image, Matt could feel a cold flush of dread like mercury under the surface of his skin. The few bites of pie he’d managed to choke down had turned into chunks of lead in his roiling stomach.

Matt put his coffee cup down so hard that the contents sloshed over the chipped rim. The fragile, anxious waitress jumped like he’d goosed her.

“Jeez, mister,” she said, mopping up the spill with a worn gray rag. “You okay?”

He looked up into her thin, worried face. She was one of those tall women who seemed to be subconsciously apologizing for her height with her stooped, kicked-dog body language.

She looked over his shoulder at the article.

“Did you know that guy?”

“No.” He folded the paper and stuffed it into his rucksack. “Well, sort of. Anyway, I’d better…”

He tossed a handful of bills on the table and shouldered his rucksack.

“Didn’t you like your pie?” the waitress called after him as he walked away.

He didn’t answer. He just hit the road. It was a long way to Long Beach.

Long Beach, California, Matt discovered, wasn’t nearly as pretty as its name implied. At least, not the areas of Long Beach frequented by the late Oscar Amezuita. He had lived in a sad little mustard-colored house on West C Street, cowering beneath the dinosaur shadows of massive container cranes on the nearby docks. Matt had considered knocking when he passed the place but had no idea what he would say to the black-eyed widow.

Excuse me, ma’am, but did your late husband ever try to eat you?

He didn’t think that would go over very well.

Amezuita had worked for Duister Stevedoring & Terminals, a small cargo-handling firm clinging to the northern flank of the massive Port of Long Beach like a skinny remora fish on a bloated shark. It was a sleek, ultramodern operation. High-tech and state-of-the-art, but still proudly proclaiming its commitment to “Preserving our environment through compliance with the principles of the Green Port Policy.” A few hours at the Long Beach library digging up background information on DS&T left Matt with more questions than answers.

For starters, the company seemed to be doing very little actual handling of cargo. Their main source of income came from a shady South African shipping company that had no public records or registration. DS&T’s yearly financial report didn’t show enough income to feed a modest family of four, let alone run that kind of high-end operation. The CEO was a shadowy, reclusive millionaire named Gregory Long. Trying to find out even
the bare basics about Long was like trying to chat up the Secret Service. He was a ghost, a nonentity. A name with no face. Clearly this was going to require a more hands-on approach.

When Matt arrived at the entrance to the DS&T dock, there was a small crowd of men standing by the locked gate. Mostly Latino, with a few black and white faces mixed in. Roughnecks, every one of them. Tough blue-collar men with hard eyes, callused hands, and jailhouse tattoos, but no visible sores or other signs of spiritual corruption. They were all struggling to keep their expressions stony and detached, but Matt could see the hunger and desperation scratching around the edges of their tough-guy masks. These were just ordinary men, down on their luck and looking for work.

Matt joined the group, silently watching and listening. Nothing happened for several minutes. No one was talking. They just waited.

Eventually Matt singled out the guy who looked like the most approachable person in the crowd, a short, sturdy Mexican man with a Lakers cap and a nose like a wad of chewed gum.

The guy smiled and shrugged. “This is my fifth try,” he said. “I may not be lucky, but I’m stubborn. How about you?”

“Did you register for the lottery already?”

Matt shook his head, trying not to look completely clueless.

“See that door?” The guy tipped his chin toward a dented metal door to the left of the gate. “Go in there and get yourself signed up. You got your card?”

“Card?” So much for not looking clueless.

Matt’s expression must have answered for him.

“Sorry, man,” the guy said. “This gig is ILWU only. Port of Long Beach policy.”

“You’re in the union and you still have to participate in a lottery to get work?”

“Blame the damn robots,” the guy said, trying for another smile, but Matt could see the resentment in his eyes. “Pretty soon these docks will be one hundred percent automated and guys like us will be competing with teenagers for minimum-wage jobs at Burger King.”

Just then, a foreman with a clipboard appeared on the other side of the gate. Matt could barely see him between the eager craning heads and jostling shoulders of the hopeful men, but when he finally got a good look at the foreman, he felt a familiar queasy knot twisting in his belly.

The foreman was tall and lanky, with broad but thin shoulders and long, spidery fingers. He was wearing heavy-duty safety glasses and a hard hat. Behind the bulky plastic glasses, a scatter of purple pustules were visible in the hollows beneath his cold blue eyes.

He began to read names off a list on the clipboard. While he read, one of the pustules burst, spraying the left lens with tiny drops of iridescent putrescence. Unsurprisingly, no one else in the crowd seemed to notice.

After the foreman finished reading the list, Matt turned to the short Mexican guy beside him. He had obviously not been picked and was trying not to let his disappointment show.

“Still unlucky,” he said, voice cracking as he tried to laugh it off. “But still stubborn. I guess I’ll try again next week.”

As he turned and walked away, Matt wanted to call after him, to tell him how lucky he really was. Because something bad was going on behind that gate. Something ugly.

As the men who had been chosen filed through the gate to whatever fate awaited them, Matt couldn’t help but notice that they were the biggest, burliest, most physically intimidating specimens in the group. He wondered exactly what kind of job was being offered to these men. Once the gate closed behind the chosen, the remainder of the crowd headed across the street to a row of seedy bars conveniently located for just such an occasion.