The Deep Zone: A Novel 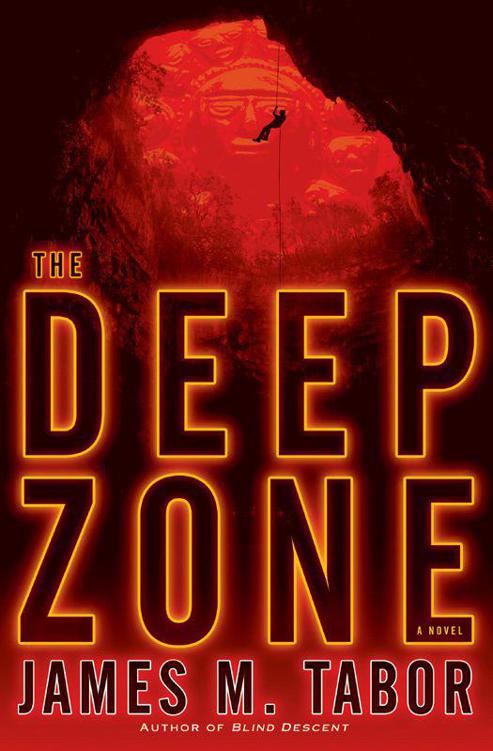 Forever on the Mountain

The Deep Zone
is a work of fiction. Names, characters, places, and incidents are the products of the author’s imagination or are used fictitiously. Any resemblance to actual events, locales, or persons, living or dead, is entirely coincidental.

This book is dedicated to
Elizabeth Burke Tabor,
who makes everything possible.

There is as much biomass beneath the earth’s surface as there is above it
.

They believed in a reality with many layers. The portal between life and where the dead go was important to them
.

Only the Devil has no inner demons
.

SOME NIGHTS, WHEN THE WINDS OF SPRING RISE UP OUT OF
Virginia, they peel fog from the Potomac and drape it over the branches of dead trees trapped in the river’s black mud banks. Streamers pull free and flow into the mews of Foggy Bottom and the cobblestoned alleys of Old Georgetown, float over the chockablock townhouses, and finally wrap pale, wet shrouds around war-fortune mansions.

A black Navigator pushed through this fog, driving west on O Street until it left behind the homes of the merely rich and entered a realm of oceanic wealth. The SUV turned onto a drive of gravel the size and color of corn kernels and walled on both sides by Madagascar barberry nine feet tall and bristling with three-inch thorns.

In the backseat, the passenger stared at the red spikes and thought about crucifixion.

The Navigator passed through a series of remote-controlled gates, the last of which was hung with warning signs:

It stopped in front of a mansion of rust-colored brick and white marble. Flowers like red fists filled white boxes hung beneath windows of wavy, distorted glass. Boxwoods carved into strange shapes lined the circular receiving area in front.

The driver got out, a tall man blacker than his black suit, lips like overripe plums, skin smooth as polished onyx. He wore sunglasses, despite the hour. His accent was thickly African: “Sair. We hair.”

The passenger stepped onto glistening cobblestones. A warm and moist night, fog coiling around his legs, air fragrant with boxwood and the coppery bouquet of those red flowers. The Navigator dissolved in mist. He climbed granite steps, their edges rounded off by a century and a half of wear, to a columned, curving porch that reminded him of the foredeck of an old sailing ship. He was reaching for the knocker, a massive brass cross hung upside down, when the door swung inward.

Standing before him was a tall woman wearing a blouse of lime-green silk and a white linen Dior skirt cut above the knee. She had shoulder-length red hair and green eyes and she was so beautiful that looking at her was like gazing at the sun: impossible to regard for more than seconds.

“Good evening. I am Erika. Thank you so much for coming.” Lilting, musical voice, traces of Ukraine or Belarus. She extended a hand, cool, long-fingered. She smelled faintly of gardenias.

“Mr. Adelheid has been expecting you. Please.”

He followed her down a long, dusky hallway floored with Italian marble, smooth and white as ancient ice. In pools of yellow light on the burgundy-painted walls hung what he took for reproductions, a van Gogh, a Renoir. Then he stopped.

“Excuse me. Is that a real Picasso?”

Erika glanced over her shoulder. “Of course. They are all originals.”

She brought him to a pair of doors from an old century, some European castle or palace, pushed one open, touched his arm, and left.

A man came forward holding a heavy crystal tumbler. He wore tan gabardine slacks pressed to a knife-edged crease, a black double-breasted blazer, a French blue shirt open at the collar, and a pale rose ascot. The visitor had never actually met someone who wore an ascot and had to keep himself from staring. The deep, resonant voice on the recordings had led him to expect someone huge and powerful, but this man was as slim as Fred Astaire and moved with the same languid grace.

A man who never hurried
, he thought.
Not once in his life
.

For all his elegance, there was nothing effeminate about the man. Quite the opposite; he moved through space like a perfectly balanced blade.

“Bernard Adelheid.”
Ahdelheight
. Accent here, too. Faint, indistinct. Swiss? Dutch? “We are so glad you are here. You must be extremely busy.”

“You know government. Too much work, too few people. Always.”

“What are you having there?”

“Fifty-year-old Laphroaig, neat.” He held his crystal tumbler aloft. The room was high-ceilinged and dimly lit and the golden whiskey seemed to collect light from the tall white candles in brass wall sconces. There was a fireplace the two of them could have walked into. He could not see into the farthest corners of the room.

A hundred dollars a glass if it’s a cent
, he thought. “I’ll have the same, then.”

Mr. Adelheid poured him four fingers from a Baccarat decanter
on a sideboard of medieval proportions. They clinked glasses and the host spoke in German:

They drank, and Mr. Adelheid said, “A very old toast. Eleventh or twelfth century. From the Teutonic Order, some say. Or perhaps der Bruderschaft St. Christoph. It goes, ‘May you live all the days of your life.’ ”

“Good advice. Even if easier said than done.”

“Not if one has the means.”

He raised his own tumbler, swirled the liquor, inhaled its spirit, a scent like lightning-struck oak.

“As some things are.”

“Including this house.” He could feel the halls and countless dark rooms winding around him like the passages and chambers of a great cave, dark space with weight, pressing, a sense of threat. “Is this yours?”

“Is my name on the deed? No. It belongs to a family of my acquaintance.”

“What kinds of ships did he own?”

Mr. Adelheid smiled. “Fast ships with big holds and hard crews. He was a slave trader.”

He thought of the black man who had let him out of the car. “Your own crew. Impressive.”

He saw chopped limbs, brained babies, changed the subject. “The place is huge.”

“And bigger than what you can see. Captain Sadler had unusual tastes even for a slaver. The cellar beneath is vast. Rooms with granite walls and drains. To contain the screams and flush the blood, I’ve been told.”

“A horrible time.” He could think of nothing else to say.