Read The Devil All the Time Online

The Devil All the Time 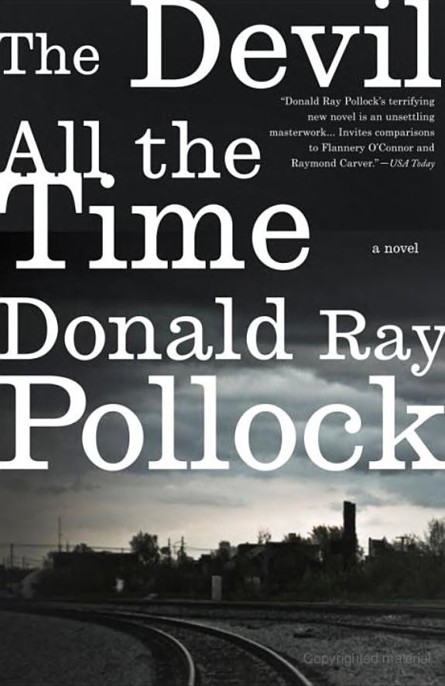 All rights reserved. Published in the United States by Doubleday,
a division of Random House, Inc., New York, and in Canada
by Random House of Canada Limited, Toronto.

A portion of this work previously appeared in slightly different form in the
Washington Square Review
.

ONCE AGAIN
FOR
PATSY

Part Two - On the Hunt

ON A DISMAL MORNING
near the end of a wet October, Arvin Eugene Russell hurried behind his father, Willard, along the edge of a pasture that overlooked a long and rocky holler in southern Ohio called Knockemstiff. Willard was tall and raw-boned, and Arvin had a hard time keeping up with him. The field was overgrown with brier patches and fading clumps of chickweed and thistle, and ground fog, thick as the gray clouds above, reached to the nine-year-old boy’s knees. After a few minutes, they veered off into the woods and followed a narrow deer path down the hill until they came to a log lying in a small clearing, the remains of a big red oak that had fallen many years ago. A weathered cross, fitted together out of boards pried from the back of the ramshackle barn behind their farmhouse, leaned a little eastward in the soft ground a few yards below them.

Willard eased himself down on the high side of the log and motioned for his son to kneel beside him in the dead, soggy leaves. Unless he had whiskey running through his veins, Willard came to the clearing every morning and evening to talk to God. Arvin didn’t know which was worse, the drinking or the praying. As far back as he could remember, it seemed that his father had fought the Devil all the time. Arvin shivered a little with the damp, pulled his coat tighter. He wished he were still in bed. Even school, with all its miseries, was better than this, but it was a Saturday and there was no way to get around it.

Through the mostly bare trees beyond the cross, Arvin could see wisps of smoke rising from a few chimneys half a mile away. Four hundred or so people lived in Knockemstiff in 1957, nearly all of them connected by blood through one godforsaken calamity or another, be it lust or necessity or just plain ignorance. Along with the tar-papered
shacks and cinder-block houses, the holler included two general stores and a Church of Christ in Christian Union and a joint known throughout the township as the Bull Pen. Though the Russells had rented the house on top of the Mitchell Flats for five years now, most of the neighbors down below still considered them outsiders. Arvin was the only kid on the school bus who wasn’t somebody’s relation. Three days before, he’d come home with another black eye. “I don’t condone no fighting just for the hell of it, but sometimes you’re just too easygoing,” Willard had told him that evening. “Them boys might be bigger than you, but the next time one of ’em starts his shit, I want you to finish it.” Willard was standing on the porch changing out of his work clothes. He handed Arvin the brown pants, stiff with dried blood and grease. He worked in a slaughterhouse in Greenfield, and that day sixteen hundred hogs had been butchered, a new record for R. J. Carroll Meatpacking. Though the boy didn’t know yet what he wanted to do when he grew up, he was pretty sure he didn’t want to kill pigs for a living.

They had just begun their prayers when the sharp crack of a branch breaking sounded behind them. As Arvin started to turn around, Willard reached over and stopped him, but not before the boy caught a glimpse of two hunters in the pale light, dirty and ragged men whom he’d seen a few times slouching in the front seat of an old sedan scabbed with rust in the parking lot of Maude Speakman’s store. One carried a brown burlap sack, the bottom stained a bright red. “Don’t pay them no mind,” Willard said quietly. “This here is the Lord’s time, not nobody else’s.”

Knowing that the men were close by made him nervous, but Arvin settled back down and closed his eyes. Willard considered the log as holy as any church built by man, and the last person in the world the boy wanted to offend was his father, even though that seemed like a losing battle at times. Except for the dampness dripping from the leaves and a squirrel cutting in a tree nearby, the woods were still again. Arvin was just beginning to think the men had moved on when one of them said in a raspy voice, “Hell, they havin’ them a little revival meeting.”

“Keep it down,” Arvin heard the other man say.

“Shit. I’m thinking now would be a good time to pay his old lady a visit. She probably laying over there in bed right now keeping it warm for me.”

“Shut the fuck up, Lucas,” the other said.

“What? Don’t tell me you wouldn’t take a piece of that. She’s a looker, damned if she ain’t.”

Arvin glanced over uneasily at his father. Willard’s eyes remained shut, his big hands woven together on top of the log. His lips moved rapidly, but the words he said were too faint for anyone but the Master to hear. The boy thought about what Willard had told him the other day, about standing up for yourself when someone gave you some shit. Evidently, those were just words, too. He had a sinking feeling that the long ride on the school bus was not going to get any better.

“Come on, you dumb sonofabitch,” the other man said, “this thing’s getting heavy.” Arvin listened as they turned and made their way back across the hill in the direction from which they’d come. Long after their footsteps faded away, he could still hear the mouthy one laughing.

A few minutes later, Willard stood up and waited for his son to say his amens. Then they walked back to the house in silence, scraped the mud off their shoes on the porch steps, and entered the warm kitchen. Arvin’s mother, Charlotte, was frying slices of bacon in an iron skillet, beating eggs with a fork in a blue bowl. She poured Willard a cup of coffee, set a glass of milk down in front of Arvin. Her black, shiny hair was pulled back in a ponytail, secured with a rubber band, and she wore a faded pink robe and a pair of fuzzy socks, one with a hole in the heel. As Arvin watched her move about the room, he tried to imagine what might have happened if the two hunters had come on to the house instead of turning around. His mother was the prettiest woman he’d ever seen. He wondered if she would have invited them in.

As soon as Willard finished eating, he pushed back his chair and went outside with a dark look on his face. He hadn’t said a word since
he’d finished his prayers. Charlotte got up from the table with her coffee and stepped over to the window. She watched him stomp across the yard and go into the barn. She considered the possibility that he had an extra bottle hid out there. The one he kept under the sink hadn’t been touched in several weeks. She turned and looked at Arvin. “Your daddy mad at you for something?”

Arvin shook his head. “I didn’t do nothing.”

“That ain’t what I asked you,” Charlotte said, leaning against the counter. “We both know how he can get.”

For a moment, Arvin considered telling his mother what had happened at the prayer log, but the shame was too great. It made him sick to think that his father would listen to a man talk about her that way and just ignore it. “Had a little revival meeting, that’s all,” he said.

“Revival meeting?” Charlotte said. “Where did you get that from?”

“I don’t know, just heard it somewhere.” Then he got up and walked down the hallway to his bedroom. He closed the door and lay down on the bed, pulling the top blanket over him. Turning on his side, he stared at the framed picture of the crucified Jesus that Willard had hung above the scratched and battered chest of drawers. Similar pictures of the Savior’s execution could be found in every room of the house except the kitchen. Charlotte had drawn the line there, the same as she’d done when he started taking Arvin over to the woods to pray. “Only on the weekends, Willard, that’s it,” she’d said. The way she saw it, too much religion could be as bad as too little, maybe even worse; but moderation was just not in her husband’s nature.

An hour or so later, Arvin was awakened by his father’s voice in the kitchen. He jumped off the bed and smoothed the wrinkles out of the wool blanket, then went to the door and pressed his ear against it. He heard Willard ask Charlotte if she needed anything from the store. “I got to gas up the truck for work,” he told her. When he heard his father’s footsteps in the hall, Arvin moved quickly away from the door and across the room. He was standing by the window pretending to study an arrowhead he’d picked up from the small collection of treasures he had lying on the sill. The door opened. “Let’s take a ride,” Willard said. “No sense you sitting in here like a house cat all day.”

Red Rope of Fate by Shea, K.M.
Mad About The Man by Stella Cameron
Made to Stick by Chip Heath
Exit Kingdom by Alden Bell
The Devil Earl by Deborah Simmons
Trust by Kate Veitch
Omega Force 6: Secret of the Phoenix by Joshua Dalzelle
My Shameful Secret (Forbidden Stepbrother Billionaire Romance) by Evers, Lana
The Madness by Alison Rattle
Touched by Fire by Greg Dinallo
Our partner