Read The Devil Amongst the Lawyers Online

The Devil Amongst the Lawyers 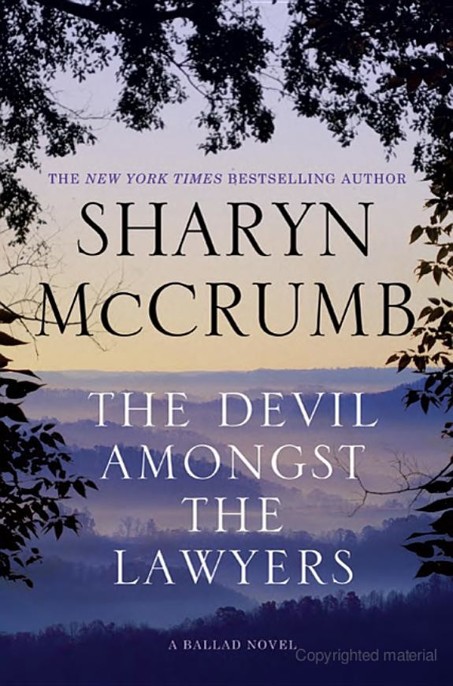 THE DEVIL AMONGST
THE LAWYERS

If Ever I Return, Pretty Peggy-O
The Hangman’s Beautiful Daughter
She Walks These Hills
The Rosewood Casket
The Ballad of Frankie Silver
The Songcatcher
Ghost Riders

St. Dale
Once Around the Track
Faster Pastor
(with Adam Edwards)

THE DEVIL
AMONGST THE
LAWYERS

THE DEVIL AMONGST THE LAWYERS
. Copyright © 2010 by Sharyn McCrumb. All rights reserved. Printed in the United States of America. For information, address St. Martin’s Press, 175 Fifth Avenue, New York, N.Y. 10010.

The devil amongst the lawyers : a ballad novel / Sharyn

The Devil Amongst the Lawyers
is a fictionalized version of the 1935 murder trial of Edith Maxwell, which took place in Wise County, Virginia. Although I changed the names and took some liberties with the details of the historical event, I have tried to be accurate about the people and places described in the novel.
Never Seen the Moon: The Trials of Edith Maxwell
by Sharon Hatfield is the definitive account of the Edith Maxwell trial for those interested in a nonfictional treatment of the story.

My thanks to H. William (Bill) Smith, Wise County director of tourism, marketing, and community development, who was my guide in my visits to Wise County, shepherding me through Pound, through the Wise courthouse, the jail, and every floor of the now-derelict Wise Inn, which housed the journalists in the novel. Lena McNicholas, who is a cousin of Edith Maxwell and remembers her from that era, gave me valuable insight into the family situation and on other relatives’ opinions of the event. Retired
Roanoke Times
newspaper reporter Paul Dellinger, who has covered his share of murder trials in southwest Virginia, was my window into the world of the journalists covering the trial, particularly the Johnson City reporter Carl Jennings. Melissa A. Watson, library manager of the Historical Society of Washington County, Virginia, assisted me in my reconstruction of a stay in Abingdon in 1935.

Patricia Twilla, Steve Womack, Clyde Howard, Jane Hicks, Richard Cunningham, and Ward Burton all gave me insights into various
aspects of the story, and I thank them for their help and their friendship. Most of the details of Carl Jennings’s life and family history, as well as the true story of the hanging of the elephant in Erwin, Tennessee, are taken from the life of my late father, Dr. Frank Arwood.

’s
Oku no Hosomichi (Narrow Road to a Far Province)
. In order to fashion an English version of his verse, I consulted several native speakers of Japanese and two English translations of Bash

I am grateful for all the assistance I received in my study of Japanese folklore and customs, particularly for the advice of Ichiro and Yuka Wada of Osaka, who provided me with excellent guidance toward the material I needed to describe Henry’s sojourn in 1920s Japan. It is from them that I first learned of the Kant

And, finally, thanks to my editor, Kathleen Gilligan of Thomas Dunne Books, and my agent, Irene Goodman, for their patience and encouragement, and for accompanying me on this long, strange trip.

It seems to me curious, not to say obscene and thoroughly terrifying, that it could occur to an association of human beings drawn together through need and chance and for profit into a company, an organ of journalism, to pry intimately into the lives of an undefended and appallingly damaged group of human beings, an ignorant and helpless rural family, for the purpose of parading the nakedness, disadvantage and humiliation of these lives before another group of human beings, in the name of science, of “honest journalism” (whatever that paradox may mean), of humanity, of social fearlessness, for money, and for a reputation for crusading and for unbias which, when skillfully enough qualified, is exchangeable at any bank for money (and in politics, for votes, job patronage, abelincolnism), and that these people could be capable of meditating this prospect without the slightest doubt of their qualification to do an “honest” piece of work, and with a conscience better than clear, and in the virtual certitude of almost unanimous public approval.

THE DEVIL AMONGST
THE LAWYERS

He had been there that day, all right. The day of the hanging. His family had always conceded that, but they insisted that he could not possibly remember the events of that day. He had been a babe in arms, not even a year old. Whenever he asked about it, they would flip through the thick black pages of the pasteboard family album and point to the sepia snapshot of him cradled in his mother’s arms, peering out of the patchwork baby quilt with an infant’s frozen stare.

He had been born the previous December, surely too young for the event to have registered in his mind. Perhaps he had imagined the memory from hearing about it later. Growing up, he had heard the tale often enough from his young uncles, who had worked in the railroad yard as his father did. They had all been there, hooting and hollering, jostling the crowd for a better view, and one of them had brought his black box Kodak Brownie, and it was he who snapped the family photos of the occasion: carefully posed shots of the Jennings brothers, bunched together and smiling, and one of a solemn teenaged sister-in-law holding baby Carl, and looking uneasy to be in the raucous crowd. There was only one snapshot that the shutterbug uncle had forgotten to take.