Read The Devil She Knows Online

The Devil She Knows 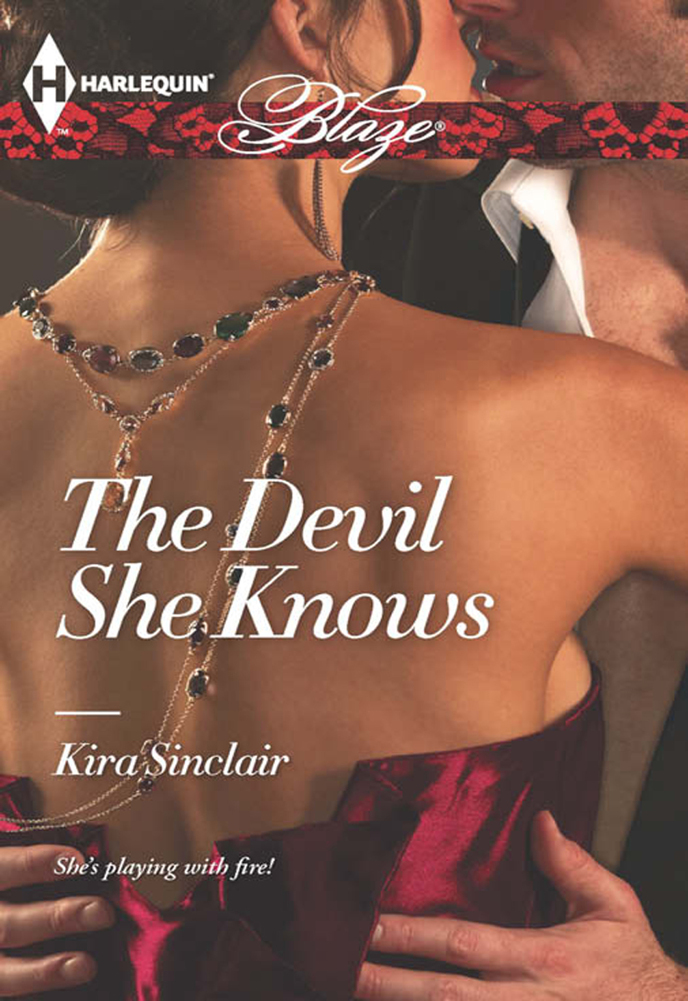 Willow Portis tries extra hard to be the good girl of Sweetheart, South Carolina. But the night of the Fall Masquerade, she steps out of her well-behaved shoes and into a supersexy angel costume. And when she’s tempted by a stranger, she gives in!

Devlin Warwick has returned to Sweetheart, determined to show up the busybodies who ran him out of town ten years earlier. Seducing Willow probably isn’t the best way to prove them wrong....

And there’ll be hell to pay when the masks come off and she realizes he’s a devil she knows!

Willow wanted to shake up her life, to be daring. At least for one night...

The perfect partner-in-crime was watching her with bedroom eyes, his face partially hidden by a red devil mask.

In the middle of the dance floor, his arms tightened, leaning her off center. He made a sound deep in the back of his throat. And then he was kissing her.

There was no easing into the moment, not with him. He devoured her, his mouth hard and demanding. Heat and need twisted through her, sharp and unexpected. Then his tongue slipped in, sliding deliciously against her own.

Tearing them apart, he brought her upright.

She clung to his shoulders, afraid that if she let go she’d topple to the ground.

“Why’d you do that?” she asked breathlessly.

“Because I could. Because I enjoy shaking things up.” His deep blue eyes flashed dangerously. “And because I would have kicked myself if I let you go without knowing how your mouth tasted.”

Long before I met Dev and Willow I knew I wanted to write a story centered around a masquerade. There’s something so liberating about donning a mask. It frees you to act wild, be daring and maybe step out of your comfort zone…even if only for a few hours.

I come by my love of costumes honestly. I’ve been traipsing across the stage since I was a little girl, first as a dancer and then as an actress. My local community theater was a home for me, a place where I belonged. I grew up there, discovering myself as I tried on different personalities and roles to see if they fit.

Though it’s been quite a while since I’ve been in a show, I have managed to find another outlet for my dramatic tendencies. Each year my local Romance Writers of America chapter holds a murder-mystery dinner. And let me just say, we totally embrace the experience. We take on completely different personas…and sometimes even genders. We laugh until we cry and, more often than not, don’t even bother solving the mystery.

I hope you enjoy Willow and Dev’s story. Maybe they’ll inspire you to don a mask and act a little crazy every now and again. I’d love to hear from you at
www.kirasinclair.com
or come chat with me on Twitter,
www.twitter.com/KiraSinclair
.

The Devil She Knows

Kira Sinclair is an award-winning author who writes emotional, passionate contemporary romances. Double winner of the National Readers’ Choice Award, her first foray into writing fiction was for a high-school English assignment. Nothing could dampen her enthusiasm…not even being forced to read the love story aloud to the class. However, it definitely made her blush. Writing about striking, sexy heroes and passionate, determined women has always excited her. She lives out her own happily-ever-after with her amazing husband, their two beautiful daughters and a menagerie of animals on a small farm in North Alabama. Kira loves to hear from readers at
www.kirasinclair.com
.

To get the inside scoop on Harlequin Blaze and its talented writers, be sure to check out
blazeauthors.com
.

Other titles by this author available in ebook format. Don’t miss any of our special offers. Write to us at the following address for information on our newest releases.

I’d like to dedicate this book to my amazing,
wonderful and brilliant daughters. I’m so proud of
the young women you’re both growing into.

I hope that one day you’ll find friends like Hope, Lexi, Willow and Tatum, and like the friends I’m blessed to have in my life. Women who will listen to you whine, let you cry on their shoulders, rejoice at your triumphs and offer a shovel if someone needs to die…even if only in jest. That kind of solidarity is priceless and absolutely necessary for getting through life with your sanity intact.

I love you both!

D
EVLIN
W
ARWICK BLEW
past the ornate sign with its elegant gold scrollwork. He didn’t bother to hide his curling scowl. Please. The only happily-ever-after he’d ever gotten was the day he’d left town.

Hitting the gas, Dev pushed his shiny red pickup past the speed limit. He watched the needle creep to fifty, sixty and head straight for eighty. He didn’t care. He wanted the speed. Let Sheriff Grant pull him over. Unlike the last time they’d tangled, at least the officer would have a legitimate reason to hassle him.

With the windows rolled down and heavy metal cranked loud, Dev enjoyed the anticipation. The citizens of Sweetheart had no idea what was about to hit them. He’d waited a long time for this moment.

He’d left—been run out of town was more like it—ten years earlier with everyone’s condemnation ringing in his ears. There was nothing the citizens of Sweetheart hated more than a scandal, although they certainly ate up the gossip that came with it. He’d given them plenty of both.

His grandfather had kicked him out. He’d lost the only family he had left. The irony was that he hadn’t actually committed the crime they’d tried and convicted him of in the court of public opinion.

But now he was back. Successful, despite their predictions that he’d end up a drug addict or a felon, just like his dad.

He was going to enjoy this.

Dev pulled into the driveway of his grandfather’s house and sat with the motor idling. There was always the inn....

But, he reminded himself, the past didn’t live inside these walls. Neither did his grandfather, who’d died four years ago. Dev hadn’t even known he was sick.

The darkened windows mocked him, reminding him that he was completely alone. The house was his now, not that he’d seen it since the night he left.

The facade was well maintained, but there were still signs of wear and tear. The house was at least fifty years old and had been well used. No doubt the second stair to the porch still creaked. The shutters needed repainting. Maybe he’d take care of that while he was here.

At least the front landscaping was immaculate. He paid enough money to keep it that way. Trimmed shrubs filled the space behind the stone retaining wall. He’d missed the amazing shade of blue of his grandmother’s hydrangeas by a couple of months. No matter how hard he tried, he could never quite get the same color. Her rosebushes in the back might have late blooms, though.

The few memories he had of his grandmother all involved her kneeling on the ground, her hands deep in dirt. For a little boy, furious and lost, the quiet moments they’d shared in the garden had been a lifeline he’d desperately needed.

Unfortunately, those visits had been all too short. The taste of something sweet that had turned bitter because he could never stay longer than a few weeks. When he’d come to live in Sweetheart full time at the age of fifteen his grandma had already been gone.

He had mixed emotions about walking through the dark green front door. The specter of that last night reared its ugly head. Yelling, screaming, his grandfather throwing one of his grandmother’s prized figurines at the wall as he ordered Dev out.

Broken pieces of ceramic scattering across the floor. Blood trickling from a nick in his cheek.

Without thought, Dev reached for the scar. The pad of his finger ran down the puckered flesh, a constant reminder of the price he’d paid for something he hadn’t even done.

But he’d learned his lesson well. If you were going to get punished for the sin you might as well enjoy committing it.

If only he could manage to hold on to the rage of that night. But if the house held some of his worst memories, it also held the best.

His grandfather, the closest thing he’d had to a father, had patiently taught him how to use power tools in the dusty, dank garage. Together they’d spent countless hours throwing a ball at the hoop tacked to the side of the house. They’d moved silently together in the kitchen as they both attempted, badly, to cook dinner.

When he’d had nowhere else to go his grandfather had taken him in, given him a home and his first taste of tough love. After the kind of mindless liberty he’d known all his life, Sweetheart had been like a prison, full of rules he didn’t give a damn about.

His grandfather had expected a lot. The crushing weight of that responsibility had been so constricting, especially when Dev knew he couldn’t live up to it.

Better to accept the low expectations and just embrace the inevitable. It was almost a relief when he could let go of the secret hope that this time somehow things would be different. They never were.

Relentless Hope (Resilient Hearts) by Cassidy, Ashley
Day of the Shadow by Rob Kidd
A Billionaire BWWM Romance 4: The Proposal by J A Fielding, Bwwm Romance Dot Com
The Harvesting by Melanie Karsak
Knight Avenged by Coreene Callahan
Princess at Sea by Dawn Cook
Best Bondage Erotica 2014 by Rachel Kramer Bussel
Vault of the Ages by Poul Anderson
To Love and To Perish by Laura Durham
The Romany Heiress by Nikki Poppen
Our partner