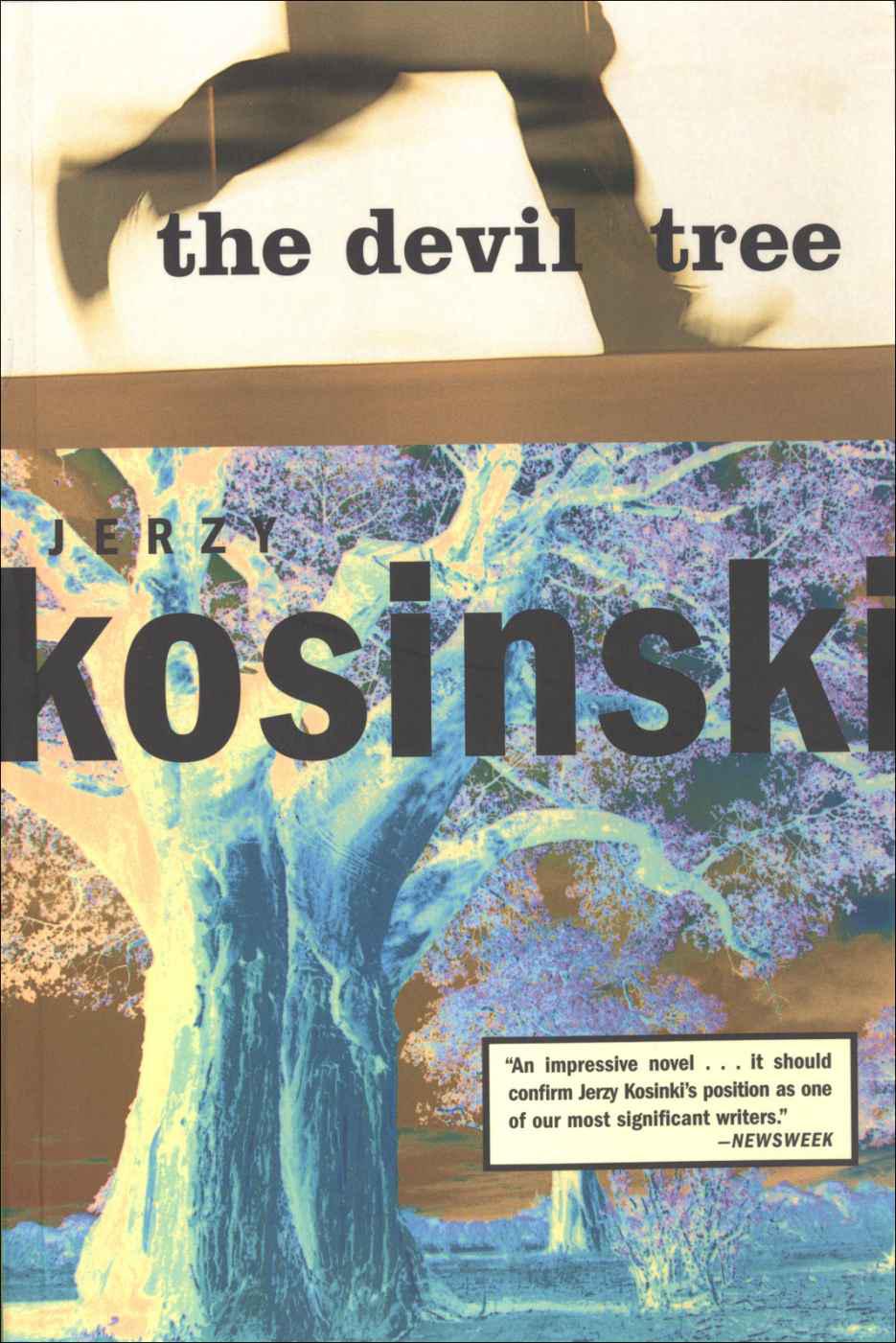 Praise for
The Devil Tree:

“Flawless . . . A strong, meaningful voice, adding something vital to the riches of the modern novel.”

“One of our finest and most important writers . . . masterful.”

“Kosinski is, one is sure, related in some crazy way to Hesse. . . . An unusual writer—so consistently faithful to his own peculiar talent.”

“Jerzy Kosinski’s prose is in itself so remarkable—terse and hardedged but still supple and fluid—that it seems impossible he could ever fail or bore his readers. . . . Kosinski is one of our most valuable and exciting writers, and
The Devil Tree
will undoubtedly find a wide and appreciative audience.”

NONFICTION
(Under the pen name Joseph Novak)
The Future Is Ours, Comrade
No Third Path

All rights reserved. No part of this book may be reproduced in any form or by any electronic or mechanical means, including information storage and retrieval systems, without permission in writing from the publisher, except by a reviewer, who may quote brief passages in a review. Any members of educational institutions wishing to photocopy part or all of the work for classroom use, or publishers who would like to obtain permission to include the work in an anthology, should send their inquiries to Grove/Atlantic, Inc., 841 Broadway, New York, NY 10003.

This book is fiction. Any similarity to any actual event or character,
whether past or present, is gratuitous and not intended.

When I wrote this novel initially, I felt restricted by the proximity of its story to the environment and events of my recent past decade. This might account for the cryptic tone of the novel’s first version.

Now, years later, in this revised and expanded edition, I have felt free to reinstate all the additional links that bound Jonathan James Whalen to those whom he loved.

To Katherina
and to the memory of my mother

Beyond all agony and anxiety lies the most important ingredient of self-reflection: the preciousness of my own existence. To my own heart my existence is unique, unprecedented, priceless, exceedingly precious, and I resist the thought of gambling away its meaning.

The native calls the baobab “the devil tree” because he claims that the devil once got tangled in its branches and punished the tree by reversing it. To the native, the roots are branches now, and the branches are roots. To ensure that there would be no more baobabs, the devil destroyed all the young ones. And that’s why, the native says, there are only full-grown baobab trees left.

Looking down at the river shimmering in the bright sun, Jonathan Whalen leaned against the steel balustrade at the end of the street. The skyline of New York that he remembered did not seem altered by the recent skyscrapers. Far across the river, jets took off from La Guardia, leaving behind them thin lines of exhaust. On the near side, a helicopter lifted into the sky, hovered over the water, then veered off, casting its shadow on the river. Another helicopter descended and touched down, quivering to a stop on the landing pad.

Whalen walked toward the heliport, where a freshly painted copter sat on a platform. A large sign proclaimed:
EXECUTIVE HELIWAYS, INC. SEE MANHATTAN FROM THE AIR. LOW-RATE EXCURSIONS
. Whalen went into the ticket office, and the clerk looked him up and down.

“Why don’t you take a subway?” said the clerk, focusing on Whalen’s old shirt, worn pants, and scuffed boots.

“Manhattan can’t be seen from the subway.”

“How about the bus?”

“Too slow. How about the sight-seeing flight?”

The clerk leaned across the counter. “Look, this is Executive Heliways, not freeload ways. Understand?”

“I do,” said Whalen. He held out several crisp bills, the exact amount listed on the wall board as the price for the half-hour flight. “Will this do?”

Shuffling uneasily, the clerk stared at the money. “I’ll check with the pilot,” he mumbled as he disappeared into the back room, and a moment later he returned, accompanied by a man in a gray uniform.

“This is the fella who wants to take the ride,” said the clerk.

“I’m not your son,” said Whalen, and he pushed the money toward the clerk.

The pilot hesitated. “I’m going to have to sort of frisk you before takeoff.”

“You frisk everyone who flies with you?”

“Then use it,” said Whalen.

“It’s easier if you put your hands up,” said the pilot, approaching him slowly, and as Whalen complied, the man rapidly patted his shirt and pants. “Take off your boots,” he directed. Again Whalen obeyed, then put them back on after the inspection. Reassured, the pilot snapped, “Let’s board,” and the two of them marched toward the landing platform.

Inside the helicopter the pilot turned to Whalen. “We’ll fly all over the place,” he said; “over the Harlem black, the Gramercy Park white, and the Chinatown yellow; over the Bowery poor and the Park Avenue rich; the East Side, the West Side, midtown, downtown.” He pulled the throttle. The machine coughed, vibrated, and arched off the ground.

“A helicopter makes me feel free,” said Whalen as he glanced at the tourists watching them through binoculars from the roof of the Empire State Building. “Still, each time I fly in one, I feel like a toy, guided by remote control by someone on the ground.”

They passed over the town houses of Greenwich Village.
“Now I’ll show you where all the big money is,” said the pilot, spinning the helicopter toward the Stock Exchange.

“Could you slow down over that building for a second?” asked Whalen. He pointed to an archaic skyscraper on Wall Street. “My father’s office was on the top floor there. When I visited him as a kid, I used to stand there and look down at the other buildings. But it’s a strange feeling to be above it, looking down.”

The pilot glanced quizzically at Whalen but said nothing as he guided the helicopter around the building and, flying over Battery Park, went all the way to the Statue of Liberty. There, trailing the wake of an oil tanker, he turned again toward Manhattan. “Okay, son,” he announced, “we’re going back home now.”

At the heliport a police car stood next to the landing pad, and as Whalen stepped out of the machine a policeman moved toward him. The Heliways clerk stood nearby.

“Put your hands up!” ordered the policeman. Whalen obeyed. The policeman frisked him, found Whalen’s wallet, and counted the money in it. “Look at this,” he muttered. “This guy’s carrying over two grand.” He turned back to Whalen. “Where’d the money come from?”

“A bank,” Whalen answered. “One we just flew over.”

The policeman stared at him. “What are you talking about?”

“I got this money from my bank,” answered Whalen.

The policeman stiffened. “Killing what?”

The policeman was not amused. “Where do you live?” he asked.

“Only money. Isn’t that enough? There’s no law that says I have to carry identification.”

“Tell me more about the law and you’ll sleep in jail tonight. Where is your family?”

The policeman nodded in disbelief. “You get one more chance,” he threatened. “Where’d you get this money?”

Whalen shrugged. “From my bank, the National Midland, Wall Street branch.” He waited. “If you don’t believe me, call the bank’s president, Mr. George Burleigh. Tell him I’m back in town, and he will tell you where my money came from. My name is Jonathan James Whalen.”

The officer went to the office to make the call. When he returned, he handed Whalen the wallet. “I’m sorry about this, Mr. Whalen.” He laughed uneasily. “You know, there are a lot of. . .” He stammered. “A lot of suspicious characters around.” He paused. “Can I give you a lift somewhere?”