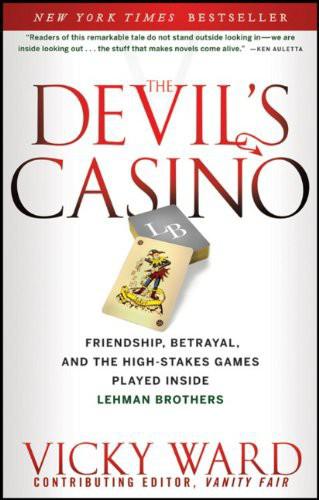 For my sons, Orlando and Lorcan Doull.

your hugs and your very good-natured patience,

“Mummy’s annoying book” would not exist.

The mind is its own place, and in itself

Can make a heav’n of hell, a hell of heav’n.

Joseph M. “Joe” Gregory
, president and chief operating officer. Gregory started at Lehman in 1968 as a summer intern when he was 16 years old. He used to cut the lawn of Lehman’s top trader, Lew Glucksman.

T. Christopher “Chris” Pettit
, Lehman president and chief operating officer. A West Point graduate, decorated Vietnam veteran. He joined the firm in 1977 and rose through its ranks—until, that is, 1997.

Board Members of Either Amex or Shearson Noted in the Book

Jeff Vanderbeek, rose to run all of fixed income, then capital markets

Jasjit “Jesse” Bhattal, replaced Tyree as head of Asia in 2000

Robert “Bobbie” Lehman, took over as head of Lehman from father

John Mack, chairman of the board and
CEO
, Morgan Stanley

domestic undersecretary at the U.S. Treasury

later secretary of the Treasury

Kendrick R. Wilson, adviser to the secretary of the Treasury

The most crucial talent required in business is an ability to understand people. You have to know what motivates them, what their strengths and weaknesses are. . . . If you’re a good judge of character, you will go very far. If not, it’s over.

I interviewed all those Lehman bankers in the 1980s? Honestly,

again. They were, with some exceptions, a greedy, selfish,

W
hen I started researching this book, I thought I’d be telling the lurid story of the final few months of America’s fourth-largest investment house, Lehman Brothers, which was almost 160 years old when it gasped its last breath on September 15, 2008.

When it filed for bankruptcy, credit markets around the world trembled, and U.S. Treasury Secretary Henry Paulson Jr. and Federal Reserve Chairman Ben S. Bernanke realized with terror that they were facing the worst economic catastrophe since the Great Depression of the 1930s.

I thought I would simply be telling the dramatic story behind that harrowing moment, viewing Lehman’s history through the lens of Paulson, Bernanke, and Lehman’s chairman and CEO, Richard S. “Dick” Fuld, who held his position for nearly 15 years, and once joked--during better times, when Lehman stock rose to its all -time high--that “they’ ll be carrying me out of here feet first.” And they almost did.

What I had failed to realize until I dug far deeper into the annals of Lehman’s history was that the drama of the ending was no match for the saga of its life. The story of the 160 -year-old firm up until 1984 had been well-chronicled (in particular, by Ken Auletta in
Greed and Glory on Wall Street: The Fall of the House of Lehman
). But what happened to it in those crucial intervening years—from 1984 until 2008—had not.

Ironically, Lehman had tried to tell this story itself, and failed. In 2003, Joseph M. “Joe” Gregory, the firm’s president, asked the chief players of the preceding 20 years (among them himself, Steve Lessing, Jeff Vanderbeek, John Cecil, and Paul Cohen) to each give their accounts in the hope of compiling “The Modern History” of Lehman. He gave up after fifty pages. But in one of those rare, extraordinary gifts that biographers pray for, those fifty pages—and, more important, the many pages written by each individual—were handed to me by a source to whom I am forever deeply indebted.

“The Modern History” opened in 1994 as Lehman gets spun out of American Express and Dick Fuld, the new
CEO
, stood in front of a cascade of balloons in the Winter Garden, the party space in the World Financial Center, across the street from the World Trade Center towers in the heart of Wall Street. Fuld proudly proclaimed: “It’s a new day. We have the opportunity to create our own destiny, and I need you to do it.”

There is talk among the senior executives about the “remarkable will of Lehman Brothers,” and the “nonnegotiable values of the Lehman culture,” which include “integrity, strength of character, open communication, loyalty, and teamwork.” The unfinished manuscript discusses rating these values above the more superficial inclinations of Wall Street: Valuing spirit over education, for example, makes Lehman a “special place to work.” The firm was small but the employees were united. They were, they proudly proclaimed again and again, “one firm.” The Lehman mantra was “Do the right thing.” They were the good guys of Wall Street.