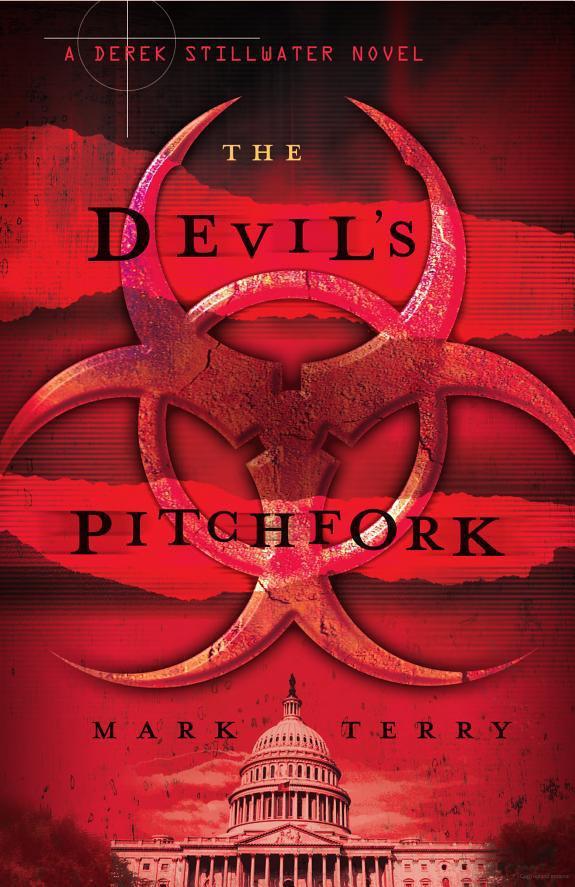 What would happen if terrorists got their hands on a virus -- a terrifying mix of Ebola, hepatitis, and bubonic plague -- with the potential to wipe out humanity? This is the crisis that Derek Stillwater faces as troubleshooter for the U.S. Department of Homeland Security. A specialist in biological and chemical weapons, he's in a breathtaking race to find the terrorist thieves and destroy Chimera M13. There's little evidence, except for the recording of a familiar voice that reminds him of an army buddy who's dead. Questioning his sanity and failing to keep his panic attacks at bay, Stillwater has no choice but to follow his instincts while scientists work on a vaccine in Washington, D.C. He just might have a chance in hell of ending the madness -- if only the government's most experienced immunological researcher hadn't become infected.

NOTICE: This work is copyrighted. It is licensed only for use by the original purchaser. Making copies of this work or distributing it to any unauthorized person by any means, including without limit email, floppy disk, file transfer, paper print out, or any other method constitutes a violation of International copyright law and subjects the violator to severe fines or imprisonment.

To find out more about Mark Terry's novels, visit his website at www.markterrybooks.com

For my brother Pete.
Love ya, bro.

D
EREK
S
TILLWATER AND
R
ICHARD
Coffee crouched on a desert ridge, peering across the expanse of sand toward an Iraqi ammunition depot. Dressed in biological containment suits that were camouflaged for night work with black face paint and tight black gloves, they watched the target site through night vision goggles. They hated the suits. They were clumsy, bulky and hot. Sweat soaked their skin and rolled down their backs and sides. Both men were thankful they didn’t have to wear the gas masks unless all hell broke loose. They were both Special Forces. Above them the desert night was overcast, cloud cover at a maximum, no stars or moon visible. A Special Forces kind of night.

Coffee went about setting up a laser targeting system. Somewhere overhead flew an F-117A Stealth fighter. Once the ammunition depot was targeted and Stillwater gave an OK, the fighter would take out the depot, leaving a massive gaping hole in the Iraqi supply line.

Twenty miles away Coalition troops were ready and waiting to break through the Iraqi defense.

Stillwater didn’t like it. Through his night vision goggles the desert glowed green. Two miles north he could see the shapes of men guarding the depot. Off to his left, much closer, was an Iraqi patrol. They were noisy and used flashlights; he found it hard to believe they would be so careless. But so far everything about the Iraqi army had surprised him. It had been amazingly easy to slip through their patrols in a specially equipped dune buggy, driving in the dark while wearing night vision goggles.

Quickly Stillwater went about laying out his equipment. He was a specialist in biological and chemical weapons. The first thing he set up was a miniature weather station. Whether the Iraqis knew it or not, they had picked a good spot for their ammunition stores; the weather conditions here were unpredictable, particularly the wind, which shifted and veered and swirled around a series of low and high ridges on three sides of the depot.

The anemometer began to spin. Wind speed: 15 knots. Direction: unstable. Mostly a north or northwest wind. Stillwater grimaced. Bad, bad, bad, he thought. The Iraqis were known to have large stores of biological and chemical weapons. Saddam Hussein was a big fan of sarin and cyclosarin gas. If the bomber nailed the depot and the wind was blowing toward the U.S. and Coalition troops, even at a distance of twenty miles there was likely to be fallout with unpredictable results.

In a briefing regarding the mission, Stillwater had recommended that allied troops stay even further back. The answer: greater distance was not tactically efficient. Meaning when the depot was blown the troops would advance quickly.

So now, on the front line, Stillwater had to make a decision. Were the weather conditions going to allow this bombing? Derek felt sand pepper his neck. That was fine. If it began to hit his face, they were in trouble.

Suddenly behind them appeared two Iraqi soldiers, also wearing night vision goggles. They began to shout at Coffee and Stillwater in hoarse Farsi and point their guns.

Not seeming to pay attention, Coffee clicked one more switch and gave Stillwater a thumbs-up.

Shit, thought Stillwater, and he hit a preprogrammed sequence on his radio giving the all-ahead. His mission was clear. The targeting laser took priority over the safety of the troops.

The soldiers barked orders, clearly wanting the two Americans to surrender. Slowly, eyes on the vane, Stillwater placed his hands on top of his head.

The Iraqis began to scream at them.

“Oh good. I was worried you’d say something that might make matters worse.” Stillwater didn’t take his eyes off the weather vane.

“I would prefer they didn’t kill us—”

They didn’t hear the F-117A fly overhead, or see its batlike shadow blot out the sky. But Stillwater had a sense of the five-hundred-pound bombs coming down just prior to impact. The roar, even from two miles away, was deafening, setting off other bombs, a chain reaction of explosions. The ground shook, seemed to undulate like a writhing snake. For a moment it felt like the end of the world. Dust rose like flies from a corpse.

Stillwater, thrown to the ground with Coffee, kept his eyes on the weather vane.

An alarm went off in his ear, the small earphone connected to a Chemical Agent Monitor, the second piece of equipment that was his responsibility. It was rigged for audio alarm only. The display that would indicate intensity and type of gas was blacked out for covert night action.

“Gas!” he shouted at Coffee.

But Coffee was rolling on the hard desert floor, handgun pulled, firing at the Iraqi soldiers who had also been flung to the ground by the force of the shock waves.

In the distance the depot continued to explode, armaments going off from the compression caused by the U.S. bombs. Coffee’s .45 seemed like a popgun in comparison.

Stillwater pulled his gas hood over his head and ran to Coffee, staggering as the ground shook beneath his feet. Coffee was gasping for air, scrabbling for his own hood. Snatching it from his hands Stillwater yanked it over his head. Antidote, antidote, he thought, quickly grabbing for the kit attached to his belt.

With practiced hands he slammed together the ampoule of atropine and injected it into Coffee’s thigh. Coffee slumped to the ground, chest heaving. Turning, Stillwater saw that the Iraqis were on the ground, gasping for breath, clawing with bleeding fingers at their throats, dying for air. They would soon be dead.

A gust of wind struck the helmet of his gas mask, sand making skittering sounds against the shield.

He glanced at the Iraqi soldiers. Both were still, skin blistered, faces swollen, lying in pools of vomit and blood and shit.

Lugging Coffee onto his shoulders, Stillwater carried him to their dune buggy and dropped him into the passenger seat. Stillwater felt for a pulse beneath the hood.

It took Stillwater only minutes to load their equipment into the dune buggy and haul ass out of there, back to the troops. As he drove, he radioed a warning of the cloud of toxic waste that was coming their way.

He hoped he wasn’t too late.

The Gates of Hell

L
IZ
V
ARGAZ LEANED AGAINST
the wall outside the locker room on the second floor of U.S. Immunological Research. Just off her left shoulder a sign read:

Beneath the sign, in blood red paint, was the spider-like biohazard symbol.

Liz tapped her foot and glanced at her watch. Michael was late. So what else was new? She didn’t like working with Michael Ballard in HL4, but her usual partner, Jim Scully, had called in sick.

No one was allowed to work HL4 alone. No one. And since there were only five authorized people to work HL4, five people whose ID badges would open the door to the locker room, she had needed to make arrangements. The two other people authorized had been unable to partner with her today. Frank Halloran, the head of the division, was in meetings all day and couldn’t get out of them. Nancy Latrelle turned her down. Liz was pretty sure Nancy would no longer be working HL4, the hot zone. They worked with the most dangerous and lethal infectious agents on the planet in HL4. Some people—most people with any degree of sanity—began to worry about working there. Any normal, intelligent human being began to worry about what one mistake, one slip of a glass pipette or a scalpel, might mean. Working with Ebola and Hanta viruses, Marburg, and others, the engineered nightmares, was not work for the squeamish. Nor was it work for the crazy. Crazy people weren’t afraid. Sane people ... well, sane people feared the demons inside HL4.

But Nancy probably hadn’t developed that sort of problem. What Nancy seemed to have developed was far more common in hot zones: claustrophobia. In order to work in a hot zone—in HL4—you had to wear a biohazard suit, a spacesuit, and some people couldn’t handle it. And some—like Nancy—who
could
handle it, started to lose their grip on it and began to sweat and panic inside the suit. It had happened the last three times Nancy had suited up.

Liz was pretty sure Nancy was done with Hot Level 4. So that left Michael. Who was chronically late.

She was just about ready to drop down to his office when the elevator door opened and a short, bustling man race-walked toward her down the fluorescent-lit corridor. He flung his arms up in the air when he saw her standing there. It was exactly his fast movements and nervous energy that made Michael Ballard a liability in a hot zone.

Angie. The soon-to-be ex-wife. Yet another reason Liz didn’t like to work with Michael. All the emotional agitation was not meant for Hot Level 4. In a hot zone you needed a cool head.

“She’s starting to quibble over the boat. The boat! She didn’t want me to buy it, she didn’t want to go out on it, and now she wants to—”

”Michael! Are you ready for this?”

She came off the wall and stood squarely in front of him, tapping him on the chest, making sure she had his full attention.

“We have to do this,” she said. “But I’m not going in there with you if you’ve got your undies in a bunch. Don’t spend time thinking about Angie or your lawyer fees or your goddamned boat. Think about getting in and out of there without any mistakes. Pay attention.”

Liz was an inch or two taller than Michael’s five-five. She gazed into his blue eyes and saw him take a deep breath, relaxing. Centering himself. He became visibly calmer.