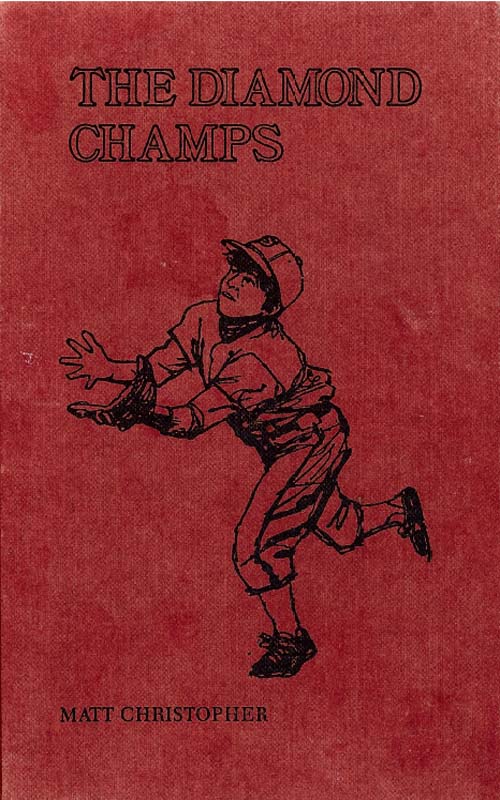 CATCHER WITH A GLASS ARM

TOO HOT TO HANDLE

MIRACLE AT THE PLATE

THE TEAM THAT COULDN'T LOSE

THE YEAR MOM WON THE PENNANT

LOOK WHO'S PLAYING FIRST BASE

THE KID WHO ONLY HIT HOMERS

NO ARM IN LEFT FIELD

THE TEAM THAT STOPPED MOVING

THE PIGEON WITH THE TENNIS ELBOW

ALL RIGHTS RESERVED. NO PART OF THIS BOOK MAY BE REPRODUCED IN ANY FORM OR BY ANY ELECTRONIC OR MECHANICAL MEANS INCLUDING
INFORMATION STORAGE AND RETRIEVAL SYSTEMS WITHOUT PERMISSION IN WRITING FROM THE PUBLISHER, EXCEPT BY A REVIEWER WHO MAY QUOTE
BRIEF PASSAGES IN A REVIEW.

To Vic and Bonnie

Heart pounding, Kim Rollins watched the coach toss the baseball up, then wallop it with his bat.

The ball shot up into the blue sky until it looked no larger than a pea, then started to descend.

“Stay with it, Kim!” cried Larry Wells, standing nearby with other outfielders of the Steelheads team.

Sure. It's easy for you to say
, thought
Kim as he tried to judge where the hall was going to drop.
You've played before. I haven't. I'm as green as grass at this game. I shouldn't even be here
!

The ball was coming toward him. He raised his gloved hand, never taking his eyes off the fast-dropping sphere for a second.
He had learned to do that much when he had missed the first three flies Coach Stag had knocked out to him.

Thunk! The ball dropped into the pocket of his glove and stuck there.

“Hey, man! You did it!” Larry exclaimed.

Someone applauded, and Kim blushed as he saw that it was Cathy Andrews, the only girl among the outfielders.

“Nice catch, Kim!” she said. “That was hit higher than the ones you missed, too!”

Kim took a deep breath, exhaled it, and winged the ball back in to home. Coach Stag praised him for the catch too, and proceeded
to hit him another. Kim caught
it, and caught the next, but dropped the fourth one.

He knocked one to her as high as he had for Kim. She got under it, caught it with no trouble, and threw it back in.

“Did Coach Stag call you up and ask you to play with the Steelheads, too?” Kim asked Cathy.

“Yes, he did. He called up everyone on the team.”

“What about the infielders?” asked Kim curiously. “And the catcher? The pitcher? Where are they?”

She blew at a lock of hair that had fallen over her face. “Coach Stag asked Jo Franklin to play second base. She's a friend
of mine and she told me.”

Jo Franklin? He knew her, too. They
were in the same grade. A whiz kid in social studies. A wizard with a tennis racket. But a baseball player?

“Cathy, don't you get the feeling that something's really strange about Mr. Stag calling us all up and making a baseball team
out of us?” Kim said. “Two girls, and me and the rest of the guys. I've never played baseball in my life, except pitch and
catch. My bag is football and track.”

“Then why are you here?”

“I don't
know
. I told him that I had never played before, but he said he didn't care. He'd have us practice every other day so that we'd
learn the game as quickly as possible, and then enter us in the Bantam League. It sounded challenging. He wants us to win
the championship.”

“The championship?” echoed Larry. “He must be a dreamer! We'll end up at the bottom! That's where we'll end up.”

He began to wonder about the coach as
the short, barrel-chested man with dark sunglasses knocked out flies to Moe Harris and Sam Jacobs, the other outfielders.
Who was he, anyway? None of the kids Kim had asked had ever heard of him before. And why was he so interested in organizing
a team composed of both girls and boys? Although there was no ruling that a girl couldn't play on a boys' team in the Bantam
League, most of the girls in town had their own baseball league.

Well, the only way to find out is to ask him
, Kim said to himself.

After half an hour of catching fly balls, the players took batting practice. Coach Stag himself stood on the mound. He threw
pitches that were easy to hit at first, then gradually he threw them faster.

The worst hitter of the lot was Kim. He remembered knocking out flies a few times while playing with friends, but that was
before he had become interested in football and track. He couldn't remember ever
picking up a bat once those activities had gotten into his blood, and could hardly believe that he was playing baseball now.

Man
! he thought.
Coach Stag has certainly sweet-talked me into it
!

“Don't worry about it,” the coach had said to him over the telephone when he had invited Kim to play on his new team. “You
just come to the practices and do as I say. I'll mold you into a baseball player before the season's half over.”

“But you
know
I've never been on a team before,” Kim had told him. “I've hardly played at all in my whole life.”

“I know, Kim,” the coach had said. “But I still want you to play on my team. Why don't you stop worrying about it, okay? I'm
the coach. Let me do the worrying. All I ask of you is to play. Can I have your word?”

Kim had taken a while to think about it. Finally he had agreed. “Okay, Mr. Stag. I'll play,” he promised.

Then he had named the practice dates, adding that he had already made arrangements for uniforms and all the other necessary
equipment. He would even get Kim a glove if he didn't have one, he had said.

But Kim had remembered the old glove his father had sitting in the back porch closet. He had used it the few times he had
played pitch and catch. It was still in good, usable condition.

So now here he was, being “molded” into a baseball player, as Coach Gorman E. Stag had promised.

Finally the coach called it quits, breathing tiredly himself after almost an hour of continuous practice. He was the only
one wearing a baseball uniform, a plain white outfit with
STEELHEADS
printed across the front of the jersey. Kim had wondered when the players would be given theirs,
but he wondered no longer as Coach Stag asked the outfielders to follow him to a blue car parked in the lot behind the third-base
bleachers.

A man sitting behind the wheel got out as the group approached.

While greetings were being exchanged, Kim saw a stack of white boxes piled on the back seat. He didn't need two guesses to
know what was in them. The coach opened the door, took the boxes out one at a time, and handed them to the players.

“I've found out your sizes,” he said, “so these uniforms should fit you perfectly.”

Kim stared at him, but refrained from asking the coach any questions. He was too happy now anyway about getting a uniform—and
a brand new one, at that.

Oohs
and
aahs
bubbled from the players as they opened their boxes and dragged out their uniforms.

Coach Stag chuckled. “How about that?” he said. “Nice, aren't they?”

“They're beautiful!” Cathy exclaimed, her eyes wide and happy.

“Glad you like them,” the coach replied. “Well, I've got to go. The next practice is the day after tomorrow. Same time, same
place.”

He opened the door on the passenger side of the car, and started to get in when Kim yelled to him, “Coach! Just a minute!”

“If you're wondering about our infield, Kim, they're practicing tomorrow!” called the coach as he got into the car. “See you
the day after!”

But the car had already backed up and was swinging around toward the road. Apparently the coach hadn't heard him.

P
UFFBALL CLOUDS FLOATED
across the sky the following afternoon as the Steelheads' infielders practiced. Jo Franklin, Cathy's friend, was alternating
at second base with Roger Merts. She was wearing a baseball cap and shorts, and handling the grounders with the ease of an
expert. As a matter of fact, Kim thought that she was even better than Roger, who acted somewhat nervous as Coach Stag's sizzling
grounders came at him.

Eric Marsh, practicing at third base,
seemed uncomfortable in his position, too. He missed a few grounders before finally catching an easy hopper. Then his long,
left-handed throw to first pulled A. J. Campbell off the base. But A. J., who seemed capable of handling his position, caught
the ball easily, winged it hack to Kim, and Kim threw it to Nick Forson, the Steelheads' catcher.

“A left-hander playing third base,” replied Larry. “He should change positions with A. J. A right-hander can catch a ball
and get the throw off quicker at third than a left-hander can. I don't get it.”

Kim shook his head. “Neither do I. Man, Coach Stag sure has some weird ideas about organizing and coaching a team.”

“Telling me?” said Larry. “I've never seen anything like it.”

Kim smiled as a thought crossed his
mind. “Know what? It sure would be something if we won the championship!”

Larry laughed. “Win the championship? You're far out, man!”

Kim shrugged. Maybe he was, but the way Coach Stag was making the team practice could make winning the championship possible.
Coach Stag was no ordinary coach. As a matter of fact, there was something very
extra-ordinary
about him. He was putting so much effort into training his players that you'd think he was getting paid for it.

Yet the method he was using to make a good, solid team was odd. He seemed to know and understand the game well, yet he had
a few peculiar ideas. Whoever did hear of a left-hander playing third base? Could he possibly be seeing a potential in Eric's
playing that position that other fans or players could not?

But what about me
? Kim thought.
What potential could he see in me? I'm just a
beginner. There must be other guys around he could have selected instead of me
.

But the team's roster had been formed, and the coach apparently wasn't going to change it.

There was a short, redheaded kid standing in front of the backstop wearing a glove, backing up the catcher on wild throws.
Until now Kim hadn't paid any attention to him.

“What's Don Morgan doing here?” he asked finally, recognizing the boy, with whom he played football.

“I don't know.” Larry cupped his hands and shouted. “Hey, Don! What are you doing? Chasing balls?”

Don turned, smiled, and shrugged. “I'm manager. When the league starts I'll be scorekeeper, too.” Cupping his hands, he added
in a lower voice, “It's for the birds!”

The Hoods by Grey, Harry
A Christmas Home: A Novel by Gregory D Kincaid
Ravenous by Forrest, V.K.
Misery's Child (The Cadian Chronicles) by Yandell, J. B.
America's Bravest by Kathryn Shay
The Telling by Beverly Lewis
Altered Egos by Bill Kitson
The Way Some People Die by Ross Macdonald
The Power of Love by Elizabeth Chandler
Sixes Wild: Manifest Destiny by Tempe O'Kun
Our partner